I’ve read plenty about people doing their own NET flavours, but has anyone tried partially burning or toasting/roasting that tobacco before starting the extraction?

Hell even stir-frying tobacco in a clean pan could impart that half burnt, caramelized flavour

Just a thought: given the burning taste cannot be accomplished without burning and since there are tobacco flavours that successfully replicate the flavour of unburnt tobacco…

Wait, of course someone has tried it: people have doubtless tried much weirder shit than that to get their juice as tasty as possible.

Wonder how it went though.

There are additives or flavors out there that resemble lightly burned tobacco or ashy hints. I don’t know them, off hand but @TorturedZen, being the resident flavor nazi might, no offense meant, TZ, lol.

I know there is an additive called Flash that is supposed to give a throat hit like cigarettes…? However, some of the flavor notes aren’t favorable.

I’ll just say that in my opinion FA Flash is not worth trying as to me it added absolutely nothing.
I tried it with a tobacco, on its own @3% and even mixed my normal 20mg and Flash @3% and it tasted exactly the same.

Just thought to add that I find Inawera DNB adds some ash/smoky flavour but I wouldn’t like to overdo it. I have tried DNB on its own @3% and it was vapeable.

That’s an interesting idea about toasting any tobacco first too. Not even thought of it personally.

Yeah I’ve heard about flash, and see it recommended as a throat hit additive, but even if it had throat hit that wouldn’t add the burning tobacco flavour.

I spose the only way to try my admittedly random idea would be with a home made NET, since iunno: a person could spend a ludicrous amount of time and waste countless flavours trying to imitate the taste of smoking tobacco but I would think partially burning real tobacco before steeping would be the most effective starting point.

How is another thing of course: I mean if you’re charring or toasting said tobacco should it be only heated until it’s started browning-up? Until it’s got black bits or actual ash scattered through it?

I would further visualize that any actual black or ashy bits would be a waste anyway since if it’s turned to charcoal then that’ll only absorb flavours - not impart them.

So like, heated to the point of the tobacco being smoked, but not literally burnt might caramelize the plant material enough to enrich it or give it that authentic smoking tobacco flavour…

Iunno, it was a random thought I had earlier today and figured I’d check or ask or just write it down

It’s a reasonable assumption to my way of thinking.

Someone could well have tried it but I’m afraid I’m not that someone so I can only imagine.
I actually hope someone else posts to say they’ve given it a go and offer their opinions.

Most likely and most often, the natural inclination would be that anyone about to chuck a bunch of tobacco in some PG or similar might be a little more than hesitant to be cooking that tobacco first for fear it’ll be damaged or whatever, though it’s not like they’d need to worry about losing nicotine since that’s easily changed after the extraction.

Somebody must have tried it…

off hand but @TorturedZen, being the resident flavor nazi might, no offense meant, TZ, lol.

As long as it was said with love, I’m good.

BTW, with respect to NET’s I’m pathetic and don’t know anything at all about such witchery.

FA Flash is not worth trying as to me it added absolutely nothing.

Same here, absolutely nothing and I was very excited to try it. What a let down that was!

That’s an interesting idea about toasting any tobacco first too.

I agree, very interesting… (said in a British accent)

@50YearsOfCigars What do you think of the OG poster brought up? I’m afraid you will have to read the First Post to know what I’m asking. Thanks in advance!!

@Kinnikinnick I’m not sure if you are still around good sir. I hope so but I’m not sure. Anyway, you and 50 years are the guys to ask.

As long as it was said with love, I’m good.

BTW, with respect to NET’s I’m pathetic and don’t know anything at all about such witchery.

Same here, absolutely nothing and I was very excited to try it. What a let down that was!

Wonder if it tastes like nothing more than concentrated PG

I meant you’d possibly know of a flavor or additive that would impart a smoked cig sort of hint to his blend… Not about NETs. And of course it was meant affectionately lol

A few years ago, I had a similar idea. I spread some pipe tobacco about a half inch deep on a tray, and put it in a toaster oven, for some light ‘toasting’. At the first sign of the slightest wisp of smoke, I took the tobacco out.

I then soaked the tobacco in some PGA (Everclear). I don’t remember how long I left the tobacco in the PGA. Probably a month or so. Then put it through the filtering process. First a coffee filter, then a 1.5 micron filter, using a vacuum pump.

The results were meh… so so. I didn’t see any flavor advantage over the same tobacco without the ‘toasting’ stage.

It’s been a while since I’ve done any tobacco extractions. I went back to synthetic tobacco flavorings. To be fair, I just used tobacco from a local smoke shop, and not from the higher quality mail order tobacco establishments. With high quality tobacco, I’m sure my extraction results would have resulted in better concentrate.

I still have my extraction & filtering gear. The way rules, regs, restrictions are tightening up, if the synthetic tobacco flavors get choked off by the puritans, I can go back to extracting.

I never thought about the wok / stir fry aspect. Give it a shot. Experimentation is what it’s all about!

That seems like a pretty solid answer to the question: even just using tobacco from a local shop you’d have had an idea what it tasted like smoked top judge the difference.

Maybe with a PG steeping the flavour may have come out different to the everclear, though I don’t imagine there’d be that much difference - if near pure alcohol didn’t extract a burnt taste, I wouldn’t think PG would do better.

If you’re looking to add that ‘ashiness’ to tobacco flavorings, There’s a few additives you can use. Inawera makes a DNB (Dirty Neutral Base) additive. There are also some Tobacco Absolute flavors out there.

Speaking of emulating tobacco and smoking: look at some these epipes I just stumbled across… 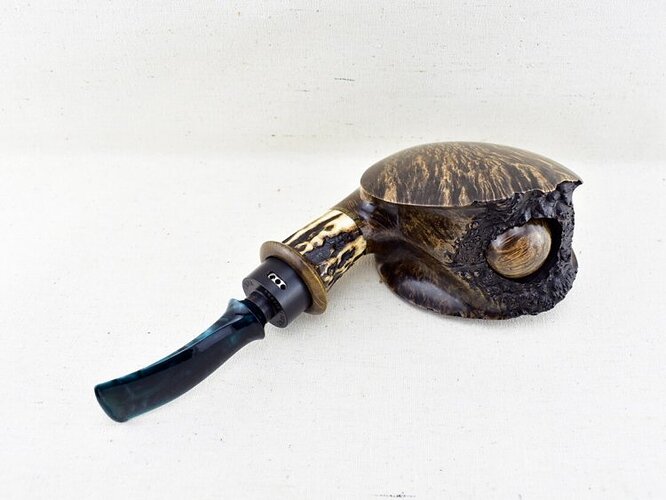 Pricey, but all handcrafted and goodness they’re nice

DNB is the best option IMO. I’ve got loads of NET’s and read a lot of posts in the NET topics.
I’ve never come across someone who burned their tobacco first.

I agree that the burned taste of tobacco adds to the whole experience.
I’ve always loved smoking and still enjoy tobacco flavours.

Most people have moved away from tobacco flavours because they don’t want to be reminded of the taste of cigarettes.

I still use tobacco for my joints. American Spirit roll your own, no additives.
I still love the taste.

Anyway, to make a long story short, if you want the burned taste, synthetics or additives seem to be the best bet.

If you decide to experiment further, I would love to hear about it.