I’m traveling cross country at present am in Redding, Ca. I want to ultimately get to Asheville, NC but I really DO NOT like high passes I mean 4,000 ft I can stomach but not much more honestly or I would fly but ( I am seriously afraid of heights )

My question is would you take I-40 and try for an alternate route around the divide or would I just be worse off.

Or i-10 straight across then head up towards the Carolinas ?

I really can’t stand i-80 through Medicine Bow & Cheyenne and then Denver I’d like to avoid the Rockies if at all possible.

I would love a route that is mostly open driving w/ low elevation ( under 4.000 ft )

@SthrnMixer you know any routes through the dessert that aren’t too painful. @GPC2012 what’s your thoughts on getting through the other side of the Continental Divide under 4.000 ft does it exist ?

If I punch in Redding, CA to Asheville, NC to google maps and drag the route south thru Bakersville, CA it looks like you skip the mountains entirely and only add 2 hours total to the drive time.

Throw in a tiny little detour in Amarillo Texas to see the Cadillac Ranch!

Thanks Zigz I think I-40 has an elevation around Flagstaff of 7,200 some odd feet that would scare me to no end. I am curious if you have driven through this area and if it’s a gradual incline w/ a gradual grade ?

I keep looking through google maps and I keep trying to avoid all the green lol. I am starting to think I just may take non interstate routes and have another day added on. I just don’t want to stress.

Flagstaff is high but the ride on the freeway is mostly straight. It’s a fairly gradual incline. I haven’t been out west in years so here’s from memory…and that’s a bit muddy.

For the least amount of elevation you would take the southern tier by working your way down to I-10, 20, and then in Atlanta grab I-85 to I-26 to Asheville. The last time I took that route it was terrible with traffic, rough roads and construction. But that’s been a long time ago now so it may be better, not sure. If you take I-80 you may have a better, smoother ride. But you will have elevations in Utah and Wyoming…although the higher passes there are Cheyenne and Laramie areas. There really isn’t much else in the way of mountains past that though. Myself I would tuff it out an take 80. Then before reaching Lincoln, take (I think) hwy 2 which cuts off a lot of miles over to I-29. Then 29 south to Kansas City, 70 to St Louis, 64 to Lexington, KY, 75 south to Knoxville, then 275 around the east side of Knoxville to 40 east to Asheville. From about mile marker 440 in TN to MM 30 in NC you will pass through The Gorge which will be some elevations. More like driving down a twisty hallway. But it’s not that bad. Once through that you’re 20 miles to Asheville.[quote=“Amy2, post:3, topic:82074”]
I am starting to think I just may take non interstate routes and have another day added on. I just don’t want to stress.
[/quote]

I think you’ll find non-interstate roads in the mountainous areas will have steeper grades with more curves.

Sorry no, I’ve only been as far west as Albuquerque along I-40 by car. Looking at the topo map tho, it seems like the TN/NC borderlands are scarier than Flagstaff, even so they both seem to carve thru and around rather than go up the mountains.

Blue Ridge Mountains and the Smokies aren’t too bad tbo the roads are carved through the mountains and have some switch backs but not nearly as many as I’ve encountered in Or. & Wa. state and now Ca. had some switch backs today in Northern Ca. ugh how I hate switchbacks and high elevations… hmm I will prob stay on the East coast a while once I get where I’m headed.

@SthrnMixer thank you for your insight as well. I was thinking these U.S. routes looks so curvy and altitudes upwards of 8-11,000 ft… YIKES ! I will ponder putting up w/ I-80 I went out west last time & took Route 2 I loved every bit of it… Montana was a lil tough and cold cold cold but it was a neat route. I just can’t stand those wide open spaces w/ wind thou and Cheyenne and Laramie are pretty tough if bad weather pops up you’ve got yourself stranded if you don’t have reservations happened to me on my first cross country trip roads were being forced to close d/t a freak storm we luckily made it to Green River area and stayed around the Grand Tetons.whew that trip started my hate affair w/ high altitudes / passes.

I grew up crossing the Boston Mountains in Arkansas fairly regularly so I thought high terrain wouldn’t get to me, but some of the overpasses here in Dallas are insanely tall. This is flatland, why am I going over a 140 foot bridge?! 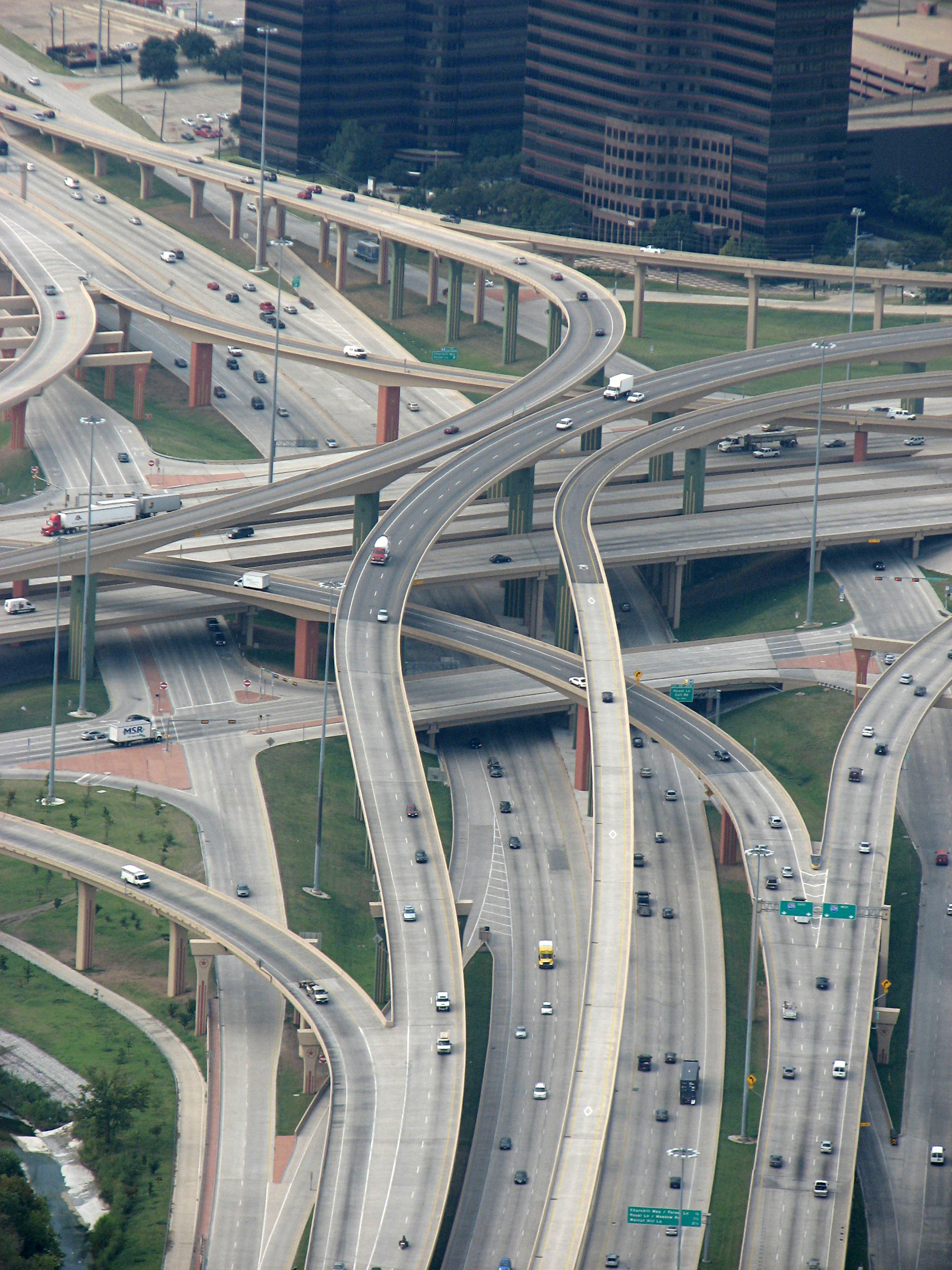 Reminds me of some of Seattle & Orlando’s roads and Atlanta’s awful and RIGHT why do I need to go this high again. Whew I won’t be going through there thank you !

What about Route 66 ? I seen @zigz link for Cadillac Ranch pretty awesome. I love funky roadsides attractions…hmmm I wonder if there is a drawback for taking this route even though I’ll have to still cut over and head West into TN no biggy I will prob try for Gatlinburg, TN and head over the pass into Asheville that way ?

If you’re rolling now the ride on I-80 should be very nice weather wise.

I moved to SC where I live now 20 years ago…from Asheville, NC. I’m not sure how much of that area you know but I could take you a couple routes in Western NC that may make you miss the passes in OR and WA!

Happy Trails, and just be safe regardless of your drive.

I know Mt. Mitchell exceeds 6,000 ft. In NC I don’t mind some leisure driving but I want to have the option of not " going through w/ it " if I should choose it to be too much for me. When I’m crossing the country I feel I don’t have as much of an option w/ truckers and commuters staking up behind me on large thoroughfares vs me moseying around the mountains on my downtime.

Today we’ve gone straight down Ca. Headed to Bakersfield but stopping South of Fresno & most likely will be headed toward Az. tomorrow. Still on back roads and just cruising. I spent some of the morning on I-5 & it was nice easy driving but heavy w/ trucks & large tractor trucks I wanted to not be so stressed so we’ve done some jumping on & off of 99 south.

I agree there are plenty mountains passes I’ve been over on the East coast that made me white knuckle a lil. Ozarks twisty turns !

I’ve traveled the route from the Ozarks to Asheville a good number of times. And use the I60 and I40 route, it normally takes me right at 11 hours (from Springfield Mo to Asheville NC). My stays while in Asheville were usually at the Extended Stay America there (I would normally be in that town for between 2 and 6 week streches) and liked having a full sized fridge and a stove since I was going to be in one spot for a bit.
I’ve also made the trip from Springfield to Farmington NM a couple of times and used 44 and 40 which was all pretty flat, I can’t really recall how long that took though, I want to say about 15 hours for some reason.

Thanks @IDJoel & @CallMeTut I am down near Fresno now and will prob suck it up and take i40 through Az or drop down to i10 for a few past the higher passes then head up back to route 66 / i40 for a few I want to see some oddities then I may start going up higher and trying to catch back onto i80 routes into NC I didn’t mind i80 back up there. I just get so tired of interstate driving and it gets really busy so I try to find routes that aren’t too daunting and make it a relaxing time.

I am in Fresno, Ca now lol but that was going to be our original plan we took I i80 forever again and couldn’t stand the Wy. area especially the 3 sisters that are they just after Medicine Bow then you have the Rockies to tend to. HAhah

I think looking at the map this morning we may do the boarder hugger… come down US 99 and pick up i10 at Palm Desert …I’m getting into your neck of the woods huh ?

Be careful in Fresno. Madera that you passed through about 30 miles north is the asshole of the earth and Fresno is 30 miles up it. LMAO

Oh yeah and you’re about 30 miles away from me BTW
I live in Reedley.

I’d say meet wifey and I in Selma for coffee this morning but she has a Dr appointment in Visalia. If you need anything vape before you leave Fresno Satyr Vaper has three locations and Woody (the owner) is a good friend of mine.

Hey while we’re chatting you ever use TPA Boysenberry flavor?

Ah wee thanks @GPC2012 I hope y’all have a good Dr.'s appt. and no I don’t remember ever using TFA Boysenberry…let me know if you like it.

Idk what routes we’ll take we switch up every 5 mins. lol ultimately I can’t tolerate long long hours of interstate so we’ll get creative. Thanks for the local hook up.