Trying to find a coffee flavor that doesn't taste like tar

I am on a personal quest to create or find a good coffee vape. I have Vaped countless juices that were sub par at best, but usually it’s just horrid.

I am new to DIY, have a novice idea on what I’m doing.

TFA-coffee-- my god this taste like burning tires, horrible taste I can’t see how this can be coffee

TFA-cappuccino-- still taste burning tires, not as horrible as the coffee since it’s probably mixed with a creamer. But still tastes nothing like a coffee

Cap-cup of Joe-- so far this is the best (still no where near good) has a slight burning tire taste but it’s almost mute. So far the only one with some sort of hope yet still doesn’t taste like coffee

TFA-espresso-- same level as cap cup of joe but has a chemical taste, but very fragrant. Still I’m not tasting anything the resembles a coffee type flavor.

Every test was with new cotton bacon, Vaped about 4-5ml’s of each to break in the cotton.

My question to the community is: does anybody know of a coffee flavor that actually tastes like coffee? Does it exist?

I tried putting some of these flavors even as low as .5% in some e-liquids and its a juice killer. The only other thing I can think of doing is using say the 15ml 5% as a flavor itself to add some juice( even doing this I would still avoid TFA coffee)

All input would be helpful

Anybody have any experience with using coffee grinds in PG as a flavor? I heard somewhere that was a thing. 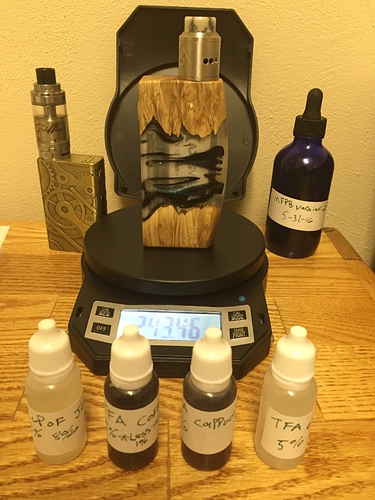 You could try this.

Thank you for the help! I forgot about flavor arts lol gonna place an order tonight for all other coffee flavors! Thank you for giving me hope, been dying for a great coffee vape.

That mod is badass.

Thank you, axis vapes does amazing work. I was fortunate to recive this whole set up from an amazingly great friend as a gift.

You have a good friend there.

Lol. Don’t worry you’ll get there.

Help will come from all angels here, just ask.

I love my coffee vaporz… you may want to try FA, Inawera, and FLV’s Coffees. These 3 are all better than the ones you have listed, IMHO. My favorite coffee flavoring so far, has been a combination of my own (DIY) and and the FLV Coffee.

We all enjoy the drink differently, as taste is subjective, so you will have to play around to find your fav too.

Josephine’s suggestion is also a good one. I normally vape the coffees at lower temperature than others, for best flavor.

More info on DIY’g your own coffee flavoring is here: Ground coffee steeped in propylene glycol?

I see people suggesting FA Tiramisu a lot when it comes to coffee flavours - supposedly a strong coffee flavour with cream and chocolate notes (much like the dessert).

FA Dark Bean (Coffee Espresso) is one of the best coffee flavors IMO, but very strong so use sparingly. I also like Liquid Barn’s cappuccino but it takes at least a month for it to be vapable. Flavorah’s coffee and mocha are both good but again very strong and take some time. Good luck. This is something I’ve been chasing for awhile. I get frustrated and give up, and then I miss coffee vapes so I try again.

@Oldmeat123 does a Coffee DIY from grounds maybe he still has his recipe !
I 2nd @JoJo that FA Dark Bean is probably going to be the best on the market for a dark espresso. I also really like Kona Coffee by Flavor Express available at http://www.ecigexpress.com/kona-coffee-flavor-1oz/reviews

I havent used Cup of Joe over 2% and even then it is strong.

I’m with Jo Jo and Amy on FA Dark Bean.

Definitely going to pick up those flavors, I only messed with cap and tfa so far. Thank you for your input, can’t wait to try them (I’m a coffee fiend lol)

Thank you for your in put, I’m gonna pick up all the new coffee flavors on this thread! Also thank you for the links I’m sure they will be very informative!

Just saying the words dark bean espresso tastes good lol now for the anxious wait for all these new flavors to come! Thank you for your values input!