From April next year vape juice will be illegal to sell within the City of San Francisco. The Flavored Tobacco Sales Restriction Ordinance bans flavors in all tobacco products without exemption. Since the FDA’s deeming rule of last year legally...

From April next year eliquid will be illegal to sell within the City of San Francisco. The Flavored Tobacco Sales Restriction Ordinance bans flavors in all tobacco products without exemption. 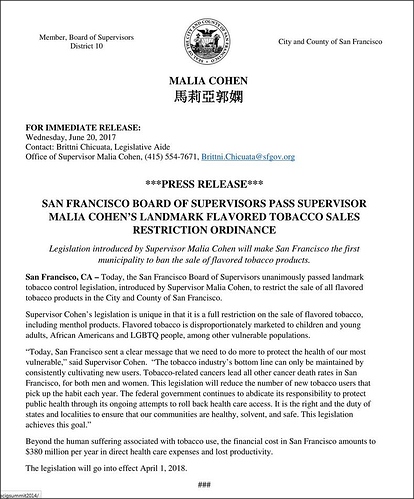 I saw this info earlier today on another forum!

Posting my thoughts here as well:

Well, I’m certainly glad they already have the Alcohol related things under control there in San Francisco… Oh, wait… they don’t!

How many traffic related deaths in San Francisco are there involving vaping tobacco or other flavored eliquids?

What’s interesting is the classification to the LGBT community? Really there is a flavor for that? Maybe I’m ignorant, but Portland Oregon is a mini California and havnt really seen targeted advertising.

I can see the kid stuff, even increased rates of advertising in low income areas sure.

Surely they can still sell flavours, nicotine and VG separately tho? Otherwise they’re making a mockery of their own idiot rules.

It goes into effect on April fool’s day next year? Are they just trolling now or what? Lmfao. Both sad and pissed by this, but damn! Idk if that idiot, or the other idiots that voted for that hold elected office, but hoping the people in San Fran hold their dumb asses accountable! Screw you Malia Cohen! Guess they can kiss all of that vice tax money goodbye too!

I read that article yesterday, including the twitter storm it caused. The woman is getting bashed for her hypocrisy #doitforthekids who can now lose their parents when they are forced back to smoking again.

This shit is precisely why I set out to learn how to make NETs… I figured our golden age would be short lived. Also why I stockpiled liquid nic and other critical supplies. Short sighted politicians in this country may well stop others from vaping or tax them into the poor house but they’ll not impact my day to day operations in the least, they moved too slow.

Just think: They had to buy piss-resistant paint for their government buildings because their homeless populations are so great and apparently they all want to pee on the city buildings. Their rent is so out of control, the average working class citizen can’t afford to rent. Traffic is so bad that it takes 2 hours to drive 10 miles during rush hour…
They got worse problems than vape flavorings.

I bet they’re all patting themselves on the back for a job well-done.

SF is my hometown. Went back in 2003 for a visit and couldn’t wait to get the hell out. It used to be such a beautiful place.

They are putting 5 shops just near the wharf out of business. Assholes.

There will be a lot of angry mofo’s when Newports are no longer available!

Oh, and in the mid 80’s when I was stationed in Germany, you couldn’t buy Newports there. The PX had Kools, and Newport smokers would “settle” for them. But my sweet little felonious (unbeknownst to her at the time) mother would mail me care packages with cartons of Newport. I would sell them to my fellow soldiers for $5/pack. That was decent money back then! Sounds like some of the “deals” I used to run, when I was in the Navy.
Reebok was in high demand back then (80’s) and we hit port in Korea often (stationed in the Philippines), I would buy’em at $5 a pair and sell them for $150 (had to give my brother a cut, since he was the one actually selling.)
Done something similar with ship’s zippo lighters. Steak everyday… in Japan! They loved those things!

@Kinnikinnick, you’re not the only one who has stockpiled some vape essentials. Now, if I can only perfect a NET like you have. Thanks for that thread, by the way.
Still working my filtering process.

Sounds like some of the “deals” I used to run, when I was in the Navy.

I have no doubt. But the overarching point I failed to make - where there is freedom of movement there will be a black market. The vapers of San Fran need not worry about no access to liquids. Many a DIY person will surface and provide those needed elixirs - government be damned. There is a benefit to that too. They’ll get to vape better liquids as well.

California - a sad situation. So beautiful, but so full of shit.

So beautiful, but so full of shit.

This is the huge point that government keeps missing! People are going to do what they want regardless, outlawing it just causes black markets. Instead of regulating it, taxing it, keeping people safe, you’ll likely have people with no care for accurate nic content, dirty labs, etc. They never learned from prohibition, when people actually died from bad homemade alcohol; not to mention the war on drugs… what a joke.

I agree about CA too, I went to school there (Trojans for life!). It used to be such a progressive and beautiful place, and they freaking ruined it! I’ve turned down jobs that pay way better than my current one just because I didn’t want to live there!

One of the few companies that i would still consider buying liquids from is in San Fran, Velvet Cloud Vapors. Hope that they can somehow move and not just close down, they were a great company to deal with.

Man o man I’m so glad we all diy! If it keeps going like this one day we’ll be getting pulled over for blowing vapor out the car windows lol 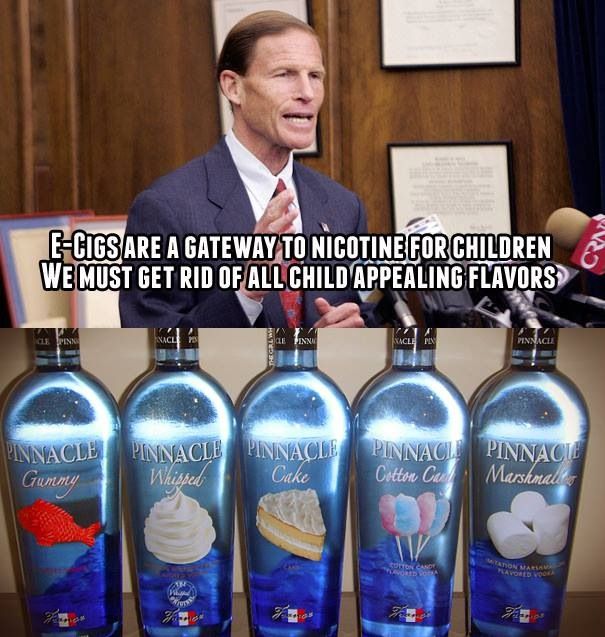 You do realize…that with government’s “reasoning skills” we had a 50/50 chance of that going the other direction right?

"Ecigs are a gateway to nicotine for children. We must get rid of all children.