so i was browsing the web and came across this clear steam vaporless eliquid made by JAC vapour. I wonder what theyre using to make the vape disappear like that… could be useful indoors where vaping is prohibited. what do you guys think?

Interesting, makes me wonder if it is pure PG.

how strange would that be vaping with no vapor

@Ken_O_Where first thought pure PG, but idk… ill have to try an see if i get no vapor… i saw someone with a setup blowing invisible clouds on one vid

agreed, it would be strange @wvsanta… something tells me i wouldnt enjoy it

something tells me i wouldnt enjoy it

something tells me i wouldnt enjoy it

Nah, it is like swimming on dry land. I get most satisfaction when I see a cloud coming out of my mouth.[quote=“Errl, post:6, topic:43882”]
to have a bottle in places where im not supposed to be vaping
[/quote]I suppose that is a plus but it is like having a fire blanket in case of a fire, I wouldn’t use one to sleep under though.

I just have a higher PG and Nic mix in the liquid I vape at work. There are lots of haters at work, so I have to do a work around due to this issue; plus, I’m just super careful where I hit my setup when I’m indoors, so as not to get caught! It’s now a fireable offense, according to the memos on the notice board! 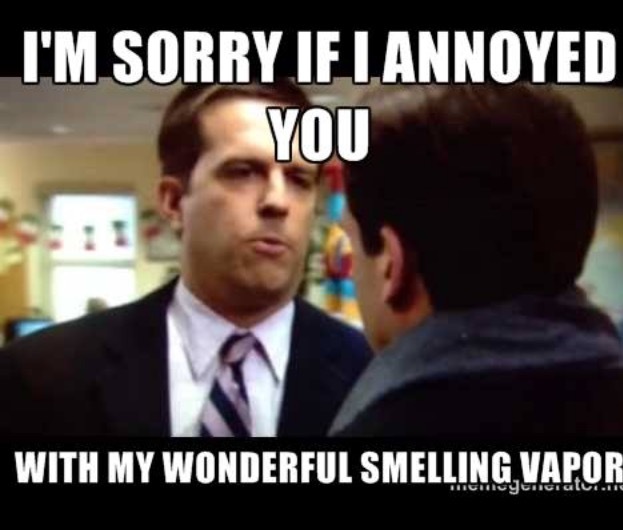 I saw something about vaporless e-liquid several years ago, so I know for sure it’s nothing new. Vapin’ Heathen has a demonstration I saw last night. By the way, he shows if you blow it out quickly it will show, but if you “hold it in your lungs” for a few seconds that’s when it disappears. Is this magic? I don’t think so. But it also reasons the aerosol went somewhere. Collecting in the lungs perhaps? No thanks, not interested.

Saw that too… The bottle he had said it contains pg, distilled water and flavoring.

I remember though from my weed smoking day’s that if you held the smoke long enough in there nothing would come out… Lol.

He also said that the throat hit was crazy which implies that it’s high pg.

The bottle he had said it contains pg, distilled water and flavoring.

Hell yes that throat hit would be wicked tho the DW would smooth it out a tiny bit. Definitely not for the pg sensitive freaks like me.

No one will ever know… I was looking into it a while back.I am allowed to vape at work but I try not to draw attention to myself by blowing huge clouds.
I ran across this video and I think the key is no vg.I think it is a pg/water mix with your usual flavoring.

Back in the day, there was no VG in e-liquid - Just PG and flavoring. It still produced vapor… I suspect it’s the distilled water and PG that lowers the vapor volume… Possibly another additive as well…

the distilled water and PG that lowers the vapor volume.

He was also using a very small device to vape on. I remember my ego not really producing much vapor at all. I wouldn’t like an all PG hit on a subtank, TH must be murder

I can see the benefits of vaporless exhale but I personally like to see the vapor that I exhale. Kinda like a “placebo effect” for me.

I like to see my clouds too much. It wouldn’t be the same.