Partially the reason I never messed with mechs. I have some, just never bothered. I know they are “safe”, if handled correctly, but I still don’t like to leave that much to chance… call me what ya will, but I have enough daily dangers in my life

Wow, I’d like to know what battery he had in there. I wonder if Mooch has seen this? I was able to view the photos. Almost hard to believe but you’d have to be a doctor to write a story with such detail like that. Early on, tube mech mods were all I used.

Almost hard to believe but you’d have to be a doctor to write a story with such detail like that.

I found it hard to believe that a Dr./Coroner actually included some information pertaining to mech mod and battery thermal runaway.

Much prayers for the victim.

I found it hard to believe that a Dr./Coroner actually included some information pertaining to mech mod and battery thermal runaway.

Good point. Maybe some thorough research or collaboration was involved in order to drive home the risks of mech mods and try to save some lives. Idk exactly how this happened to this poor guy but a friend who used to manage a vape shop said that a customer asked him if he could use twistie wire for a coil. These are the things that scare the crap out of me. Back in the day, I spent about 10 months researching and talking to the right people before even attempting to use a mech tube.

This will help the cause. Sad for the guy. Can’t speak for this unfortunate person, but I knew a young guy that worked in a vape store, just when Vaping began to take off. He had a mech like the one in the picture and thought he was really cool running a 0.11 build on it. I tried to warn him of the danger, but he explained to me that such a low build, meant less strain on the battery, as the coil heated up quickly. I tried to explain that it didn’t work like that, and that not only was it draining the battery quicker, but that it had to complete the circuit, which means that more energy is returning to the battery quicker, forcing it to heat up. However, as he worked in a vape store, and was younger than my daughter, he knew best. Then people wonder why dreadful things like this happen. Still less deaths than from smoking though. Vastly. Sad in more ways than one.

Yeah, I always keep a couple of mech mods on standby. Nothing much can go wrong… Oops.

I tend to think it’s fake for the simple fact that the mod had little damage (especially the x-ray). The force it would take an object that large to penetrate that far into the face and skull should damage that object too. Pretty much every mech explosion I’ve seen has severely damaged the device. 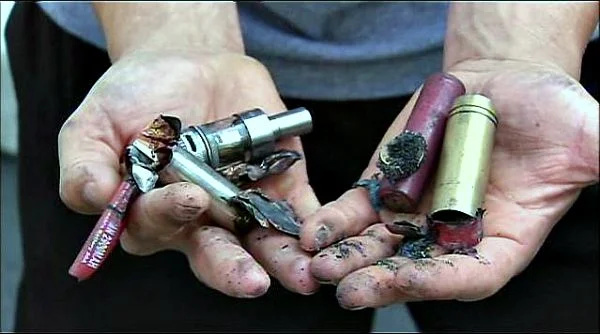 I tend to think it’s fake for the simple fact that the mod had little damage (especially the x-ray).

That’s the first thing I thought of when I saw the x-ray. That mod looks too pristine for the alleged damage it did. Not only that, a mod wouldn’t just launch itself. To do that kind of damage the mech mod would have needed to be encased by something external (think gun barrel) so the force of the resulting ignition would be focused. I could see the battery itself maybe doing that, but the entire mod? I say there’s fuckery afoot!

I have to agree @Pro_Vapes, @TorturedZen, sure looked pristine.

Wow, how did they get that photo with the mod in a skull with
zee brains and all? Can photoshop do that?

You have a point there. You’d think that the x-ray would look more like shrapnel.

So I’m not the only one to think that. The thing exploded and only the drip tip separated from the device?
It looks so good you can just put it back on a shelf and sell it.

I could see a trip/fall maybe doing that but can’t understand how a mech could possibly “explode” with no visible damage and rocket into a skull. Just doesn’t make sense.

I was SURE (not certain) that this was going to be a well crafted hoax. (unfortunately the story is not a hoax). For privacy reasons I resented having to sign up for imjur to see this, but I wanted to resolve the question, so I did.
First I copied this text from the text given in the story at imjur:

[quote]first documented fatality by electronic cigarette explosion[/quote] and I pasted that into a search engine.
Results included a number of news reports and this story from The National Law Review (a credible source I think): https://www.natlawreview.com/article/first-us-death-exploding-e-cigarette

Next I did an image search using his name, ‘Tallmadge D’Elia’ because I wanted to see if he looked like the man in the first photo in the imjur story. Results? close enough and almost every image in the search result was associated with a news story about this incident. I changed the image search to ‘web’ search. It was widely reported by local, national and international media. Here is an example that reports the autopsy result: https://www.tampabay.com/news/publicsafety/accidents/Autopsy-Vape-pen-explosion-fatally-wounded-St-Petersburg-man_168257514/
-continued in next post-

The next thing I wanted to confirm was the images used in the imjur story. These are reportedly actual images from the autopsy. Normally autopsies are not released to the public without either permission from the family or some kind of legal filing such as a request filed pursuant to the ‘Freedom of Information Act.’ This is the result of my very brief investigation into that question.
I found an online obituary for Tallmadge D’Elia from the Funeral Home which included comments and condolences from friends etc. One of those condolences was addressed to his Father ‘Dr. D’Eila.’ So, I accept that his father is a Dr. and I assume a medical doctor if not a PhD in some other field.
Next I found a news story in which the father was interviewed. He stated to the effect that he ‘never wanted to see this happen again to anyone else.’ Combining that with the suggested fact that he is a doctor, I think it’s very reasonable to believe that he gave broad permission for the public release of the entire autopsy.
I don’t know where the person who posted it to imjur found it but it’s probably posted online in a number of places for anyone who wants to search for it.
As for me, I’ve seen enough.

Still doesn’t add up though, it was reported this was explosion and caused a fire in the room he was found, and I didn’t see any burns

“Actually that’s a violent explosion. Usually these are venting," he said, "That’s [his was] an explosion. That’s unusual.” and that’s coming a battery expert

ABC Action News first told you about avape pen explosionthat killed a St. Petersburg man. Today, the vape pen company that sold him his device is fighting back, blaming the batteries and a bigger industry-wide problem.

It is the nature of the beast man. As in the editorial I shared about the flashlight exploding, the headline and info didn’t focus on the battery being the explosive ingredient.