What concentrate companies have been around the longest?

What concentrate companies have been around 6 or 7 years or better?

.
Flavorah is right around the 6 year mark (IIRC)

Thank you so much

2003
What would become the first commercially successful electronic cigarette is created in Beijing, China by Hon Lik, a 52 year old pharmacist, inventor and smoker. He reportedly created the device after his father, also a heavy smoker, dies of lung cancer.

Sept 2008
The World Health Organization (WHO) proclaims that it does not consider the electronic cigarette to be a legitimate smoking cessation aid and demands that marketers immediately remove from their materials any suggestions that the WHO considers electronic cigarettes safe and effective.

Oct 2008
In a study funded by Ruyan, Health New Zealand conducts a detailed quantitative analysis and concludes that carcinogens and toxicants are present only below harmful levels. On the basis of the findings, the e-cigarette is rated several orders of magnitude (100 to 1000 times) less dangerous than smoking tobacco cigarettes. The nicotine dose is comparable to that of a medicinal nicotine inhaler. Overall, the product tested was deemed a “safe alternative to smoking.”

Jan 2009
Australia bans the possession and sale of electronic cigarettes which contain nicotine, citing that “every form of nicotine except for replacement therapies and cigarettes are classified as a form of poison.”

I remember about the whole (recent) rebrand to VapElf with them… But wasn’t there discussion a few years ago about the possibility of HC just being rebranded X’ian Taime at some point?
(I forget the outcome, but I remember it being mentioned here at some point.)

Quite possibly. Their website offers some info (but not directly answering to that).

https://www.lorannoils.com/e-cigarette-inquiries
Get Suckered ( premier online resource for baking and candy flavorings) began its practice in 1983. (OOO bought out Get Suckered)
re: Newsletter on recent GetSuckered.com Acquisition by OOOFlavors.com | One on One Flavors

Let’s not forget Dekang, a role in the industry… and quite old…

Please don’t take this the wrong way Frank, but I can’t even think of a vendor that sells DeKang…much less seen them mentioned in the forum in forever.

I don’t recall ever seeing them in a recipe…
(Though that’s moot I guess, since there’s always the rare exception.)

Good grief Rob, you’re a friend, and quite a few years we read each other, why should I take you wrong! No way!
I was just thinking about “history” Trivia style, which would be the oldest?
I thought, probably LA CCW and companies like that, then I thought about about the trio, Ruyan Dekang Hangsen, but Ruyan (dragonite) didn’t make flavours, Dekang and Hangsen did and thought about the RY4 mess, Ludo Timmermanns making it in a Dekang Lab for Ruyan, coz Ruyan didn’t make flavours.
Just thinking aloud… exploiting a Trivia style question… I love these things… guess this: 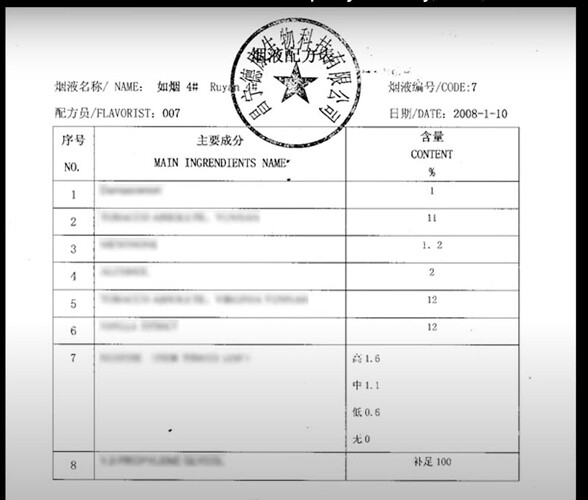 Good grief Rob, you’re a friend, and quite a few years we read each other, why should I take you wrong! No way!

Glad to hear!
Sorry for worrying about it, but I guess after one too many times of someone taking something the wrong way, I’ve begun to lean towards avoiding a misunderstanding before it happens.

I was just thinking about “history” Trivia style, which would be the oldest?

Gotcha! I thought about that too for a brief moment, but I decided not to go down that route, since I assumed the intent was vaping related (could be a wrong assumption on my part lol).

There’s a TON of older, more established companies (Wilson, Watkins, Mother Murphys, etc) but none of them are “established vaping suppliers” (loosely speaking), so I skipped them.

Since you’re going down that train of thought though… grins
Any idea how long the “Tino D’Milano” setup has been in existence? I know they work with Inawera, but were they an offshoot created by working with them? Or did they exist separately before the collaboration efforts?
Hrrmmm

Things that creep through the dark matter at night… (inquiring minds, and all that rot lol)

Any idea how long the “Tino D’Milano” setup has been in existence?

You’re like me, but I knew that… and here our vapefiction inquiring minds start running:

As far as I knew it was a collaboration with FA, but it broke around 2018 if I remember correctly, when some (most) of the flavours were reformulated (strange for INW innit?) no spin offs.

Roger that, alive and kicking, isn’t MM still making a dedicated line for FLV? and makes some of the TPA’s OS?

Making flavours since 1946… beat that!

Only two problems with that BrotherBob.

Kidding aside, I really do wish we had reasonable access to some of the more esoteric (to us) flavor companies that are in, say: Malaysia, Brazil, etc.

Though honestly, that’s a bit Utopian.
We’ve got access to so much more than so many do, that we should remain thankful for what we still have. (Reminding myself here)

and thought about the RY4 mess

care to elaborate? I’ve seen RY4 in flavors and recipes, but have no idea what it is.

As far as I knew it was a collaboration with FA, but it broke around 2018 if I remember correctly, when some (most) of the flavours were reformulated (strange for INW innit?) no spin offs.

That confuses me.
I mean, it would make sense (TDM working with FA; by geographics alone)…

Personally, I always wondered if the shift at Inawera was partially attributed to the change in “family dynamics” with Marcela(?) and hubby leaving and forming Sobucky (and their subsequent offerings).

isn’t MM still making a dedicated line for FLV? and makes some of the TPA’s OS?

I’m sure they’ve made runs for practically everyone and their brother (in almost every industry) at one point or another.

Hell, if ‘the mouthpiece’ was still here, I’m sure she’d say they even offered to make a line for God himself, but they were only a couple millenia behind actually being able to.