I’m bored so I thought it would be fun to start a thread about what you are currently vaping and/or mixing today.

Post the recipe or a link to it if ya want but it’s not necessary. (If you post a recipe that belongs to someone else please give them credit.)

Right now I am finishing off whats left in a couple of 30ml bottles. I am running out of empties and need to finish these so I can make more juice tonight.

I’m currently vaping an Apple Banana Nut Bread mix and earlier I finished off a Creamy Bubbly Cola mix. I’m also going to try and finish off a bottle of Fiesta Fruit by @Amy2 … Yummmy stuff!

I mostly like desert type mixes and have plenty of them steeping but my wife and daughter are getting low on juice. They love the fruity mixes so tonight I’m going to mix up a Forrest Fruit mix that they love and a couple peachy mixes.

Lets keep this thread going for a while … So, what are you vaping/mixing?

I am at an all time low - Haven’t mixed much recently. Usually I have ~10 atties/tanks going with different stuff. Now I only have these going:

I added some cactus to my last order … Looking forward to playing with it.

I haven’t tried your Custard mix yet but plan on it, I’ve added it to my favorites so I don’t forget. I have made a few others though and I can proudly say I am a huge fan of custard

I’d have to agree with Lars I have been neglecting my mixing lately. I drained the last of my apple sparkling wine mix yesterday so tonight I need to make a seed steep batch of the 1 ml I managed to save of it, it took much dedication to do this !

I drained the last of my apple sparkling wine mix yesterday …

I’m glad ya liked that one! Mine didn’t last long after I started passing it around at work … lol.

It is an EDV for me for sure ! I need to go back and see if the rating system is back up, when I tried last time it wasn’t.

I’m vaping ThirdWorldCustard and I mixed a Butterscotch Custard today.

Just mixed up my Sweet Papaya Lime Fool for myself, one of the few mixes I can vape all day and not get tired of, and some Forrest Fruit for my better half.

Also mixed up a Space Jam clone that my wife really likes and Summer Heat, both by ELC (don’t know who he is but he has some nice FlavourArt mixes).

I keep all my juice on a shelf in a old roll top style desk. Currently their is 36 (30ml) bottles of juice in it.

I hate trying to decide what juice to vape for the day so I’ll open up the desk, close my eyes, reach in and randomly grab 3 bottles. 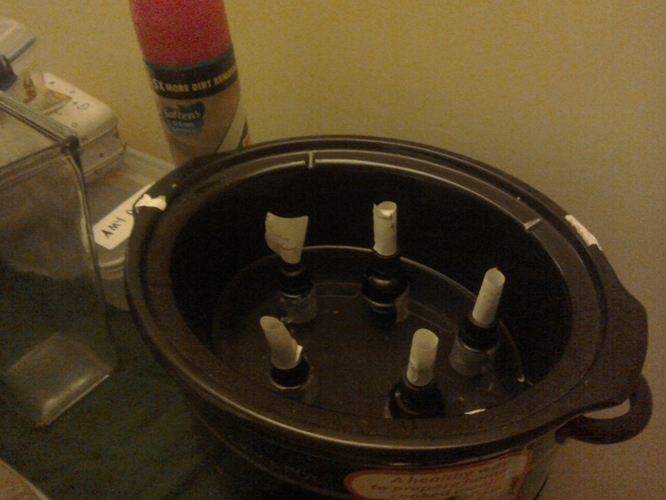 I need to try one of the Red Hot Cinnamon mixes that ya guys are making, I love cinnamon!

Thanks found it. I haven’t posted mine yet, its steeping.

Today’s random choices were HIC’s Pina Colada and my Banana Foster Parfaits. Sorry, I’m using my phone and don’t have a link to either but I think they are both on the recipe site.

If ya like pina coladas then ya need to make HIC’s recipe, its fantastic! I could vape it all day

I’m vaping on some STRAWNANA CUSTARD by @Ken_o_where it’s been steeping for around 4 weeks and is just Devine in my billow v2.

@JohnZena that Butterscotch Custard didn’t happen to be
6% BUTTERSCOTCH TPA
10% VANILLA CUSTARD V1 CAP
did it??

It’s a great simple recipe if it is.

I went through 30ml in less than 24hours lol.

Also forgot to say I’m mixing 1000ml of this tonight as I can’t get enough of it.

Does the fa champagne give it a sparkling effect or just flavour?