I’d like to know that too @ Shaner. Looking for a sparkling effect like how that’s described. I keep looking for a non flavored carbonated concentrate.

eehhh … kinda … Some say they get a lot of fizz with it but I only get a hint of it, I really like the wine flavor it has though. IMO FA Cola is the best at achieving a fizzy sensation. Max Dew (TPA) also has a little and might work for ya Amy if ya can work with the citrus flavor. I don’t know of any that is non flavored though.

@Shaner I got my Nicotine in today ( we just moved Again uhh ) we’re here now for a year woo woo ANyways,been waiting on my stuff so I can mix your batch again. I also ordered the wine champagne but I think it’ll be here sometime by saturday bummer part But I am excited to try it with the original ingredients.
Now, For those who have only TFA champagne it was a good subsitute for the wine champagne. Such a nice recipe!

Also, Oba Oba has a teeny tiny bit of cream soda feel at the end I could plug that one in if I wanted a cream sensation with the soda feel , see I don’t love the cola I use it but it’s annoying that I pay attention to it instead of the other flavors. ( does that happen to anyone else… u right away pick up what you don’t like. ) maybe it’s the critic in me.

Yeah the cola isn’t the best flavor to combine in mixes. Tonight I finished off a bottle of HIC’s Baileys Coke. I still had about 1ml left in my tank, not enough for the drive home from work, so I topped it off with about 4mls of a Pom, Papaya, and Orange mix, figured it would combine to make some kind of fruity cola. Wrong, it was nasty. The cola overpowered all of it.

I have only vaped a few mixes that the cola really worked well in. HIC’s Baileys Coke and Cherry Coke, my Creamy Bubbly Cola and a Classic Cola Cake mix that I adapted from a bakery recipe on myrecipes.com

Oba Oba is yummy. I haven’t made to many recipes with it yet through. HIC’s (Can ya tell I like HICs recipes … lol) Strawberry Malt is fantastic and I created a creamy strawberry and peach mix with it that is very good.

Note to self: order nic today.

I just got
My heartland order in . Dirty dog ah ? May have to check it out. I’m still vaping your storm chaser made a 30 ml of it last month. ( you know I switch flavors all day long

Who is DaMomma? Is that you?

One of the guys at work asked me to make him a sweet coffee vape with no cream. I’m gonna have to see what I can come up with.

THAT looks super tasty! Spicey as well! I might have to swap out the new FA Storm for the Desert Ship; just a bit lighter on the spice kick.

Vaping on some Bleach here at work. I love this stuff.

Just had a look and a copy of DaMomma’s Dirt Doggie.
I’m adding it to my “Try Next” notes. oh heck, I’ll mix it up later. Still never tried a good coffee vape. It sounds so good. I’m enjoying Peach TPA with White Peach FA. I need to try again to make a recipe and post it. I tried once and it wouldn’t come out. It was giving me some sort of error msg.
My Peach Custard goes like this (and it’s my favorite vape)
TPA Peach 50%
TPA Vanilla Custard 40%
FW Cake Batter Dip 10%
Optional: TPA Vanilla Swirl about 5%
I also suggest adding just a touch of FA White Peach to it to increase peach intensity.

Vaping on some Bleach here at work. I love this stuff.

Fresh off the press and very tasty. INW Coconut is the best out there IMO. Vaping in the TFV4 is like eating pie.

Flavor total: 18%
Remember to rate it at: http://e-liquid-recipes.com/r/1QAt

So tonight I put together 3 coffee recipes to try out.

The first one is a Indian Chai Iced Coffee based off of this recipe:

Garam masala is the combination of Indian spices that is so popular in regional cuisines of India and in its famous chai tea. However, weve discovered its even more delicious in coffee. If your coffee vendor carries Mysore, Indias most famous bean,...


Hopefully it will be a yummmy spicy iced coffee with Anise (FA), Cinnamon Ceylon (FA), Cardamom (FA), and Clove (FA)

The second one also a spiced Chai Coffee based off of this recipe:

Ive been making this Mexican-East Indian flavored coffee for years and the thought never occurred to me of posting the recipe until recently. To Chai-ify the coffee, add 1/8 teaspoon ground black pepper. I use our Bialetti stainless steel stove-top...


I’ll be using some Black Pepper (FA) in this one … Looking forward to trying it out in another recipe other than HIC’s Black Pepper Ice Cream or his Braune Pfeffernüsse recipe.

The third is Tiramisu Parfaits based in part off of this recipe:

I had the real stuff the other day. It was good, with all those calories but I think this one will be just as good.....and much healthier!


and my own Banana Foster Parfaits recipe.

I’ll mix them up tomorrow and tweak them from there. I’ll post results after they have had a chance to age a bit.

Time to do some mixing 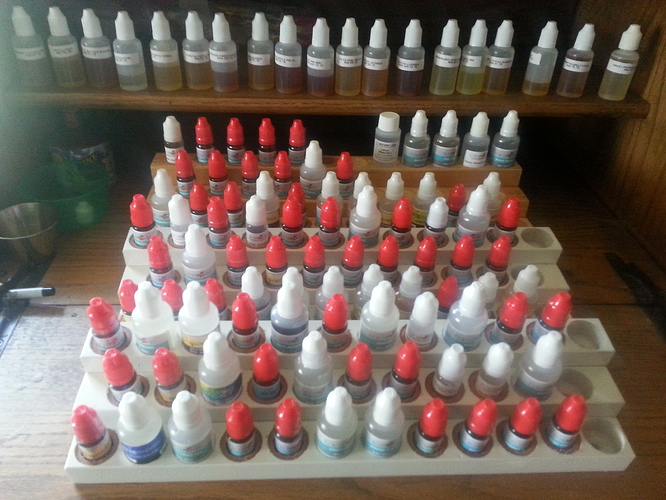 Oh I want one of those racks ! Wow where did u get that ?

Thanks @Amy2 … I made them. They are just 1x2s with holes drilled in them to fit the 30ml bottles, glued together in a stair pattern so I can read the labels of all the bottles and then painted (still need to paint the back one). I then made leather inserts that fit in the holes to securely hold the 10 ml bottles.

All the bottles are placed in the rack according to how they are listed in my Flavor Stash on the recipe site. Makes finding them very easy.

I searching for a simple vapeable blueberry cheesecake recipe.
My wife used to love it when I made that long ago but, I only ha TFA cheesecake graham crust & blueberry extra.

I gotta get flavor west butterscotch + caramel flavors everyone say F.W. has the best of those 2.