When to retire batteries?

After having problems with my first run IPV4, (caught on fire). I’ve been using my current sets of six Samsung R25’s for about six weeks and would like advise from the community on signs of what you look for to decide it time to send the batteries to the recycle bin.
When the warranty center for Pioneer4you sent me a replacement IPV4s, I of course got three new sets of batteries. Labeled the batteries as sets and always rotated them. Lastly I’ve noticed it’s taking a little longer to charge one batterie than the other (same set). Is this common? Should I toss them or what?
Thanks in advance for helping me with this and all my Vaping issues.

I only retire them when performance has dropped significantly. Also, once in a while I swap places, so that A2 sits in A1’s place and the other way around… (I label my batteries A1, A2, B1, B2, C1, C2 and so on)…

Ok, change places in the mod I assume? Shouldn’t matter on the charger?
The current set of batteries preform fine, just noticed the charging issue. So I’m not going to toss these.

On the mod, yes

On one set of batteries that I am about to retire, when the battery “runs out”, I find that I can switch their places and they’re good for quite a few more puffs

[quote=“Ggrhauling, post:1, topic:29700, full:true”]I’ve noticed it’s taking a little longer to charge one batterie than the other (same set). Is this common?
[/quote]

Opinions may vary here, but if it were me here’s how I would approach it.

If I didn’t need that battery I would toss it. If I need that extra set in rotation, I would use it IF -

Check during use. Pull the batter cover and feel the batteries. If one is warmer than the other, identify the one that takes longer to charge and toss it. I wouldn’t trust that one.

Seing as the batteries are paired, both batteries should be tossed then… The idea is to wear them down evenly - adding a new battery would immediately make it uneven (unless the other battery is in pristine condition)

What if you only use one battery? I use an IPV IIs.
I understood I can use a battery until it no longer charges, and/or until
the wrapping is damaged.
I’ve been using some of my 8 batteries for almost a year now. A couple of them
seem to deplete quicker than the others, but is it dangerous somehow to keep
using them?

Only have one pair of married batteries. Need to mark them A1 + A2 …ty death. Have some that are a yr old…they still charge and work…will keep them. They look fine. When in doubt will toss them.

You should be good, but if they don’t hold charge for long any more, why replace them?

Seing as the batteries are paired, both batteries should be tossed then… The idea is to wear them down evenly - adding a new battery would immediately make it uneven (unless the other battery is in pristine condition)

You’re just messing with me, I know you are

Also I didn’t mean replace the suspect battery, just toss it if there’s a concern it could be a problem. But if the other is still good hang on to it. I have a couple of single 18650 devices I keep as spares. All unmarried batteries collecting dust right beside them.

From people more knowledgeable than myself (dealing with mods for fun and testing batteries for a living), I have heard that almost all dual battery mods aren’t wired perfectly, so one of the batteries gives more than the other. That means after use one will be lower in mah left, so you should switch their position after every recharge, if you want to use them evenly. Personally I only have one dual battery mod, and that’s with a DNA40 which should - but doesn’t - take care of this uneven stress.

If you haven’t already, I would suggest getting the best charger you can get. Your batteries will live longer, you’ll reduce risk to a minimum and you can see precisely how many mah you have charged already, how much volt there is in the battery etc. There are great threads on different chargers over on ECF, Google’s your guide.

With a charger like that you can even find out how many mah you really get out of your battery. For some of the batteries I own, I can get 500-800 mah while still above 4.0v, for others such as the purple Efests they drop really quickly to 3.8v and stay there for quite a while.

It’s a side effect of using them in series without a balancing circuit; it’s natural, and doesn’t really have anything to do with wiring

Thanks for pointing that out! My technical knowledge is rather limited…

Do you have a link to a charger on Amazon that shows charging volts? Need to get one bad,didn’t know they made them.

That’s what I’ve been wanting to hear!!

I’m using the XTAR VC2, bought it on recommendation, pretty happy with it. 20$ 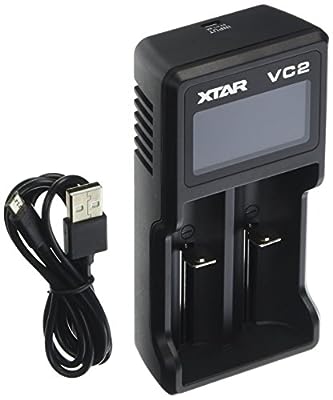 The XTAR VC2 has a countdown timer to let you know when your battery is charged and it can be used as a battery bank for external USB devices.

Here’s the one I have. There are better out there and the one @Naseschwarz shared may well be better…I’m not familiar with it but I’m sure someone can weigh in. 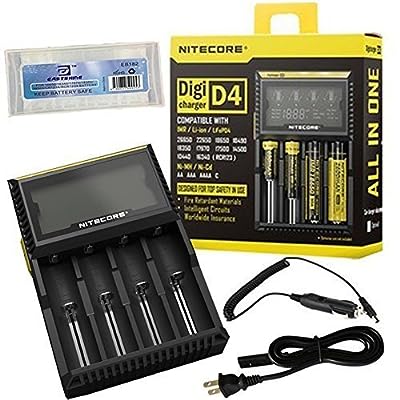 After some research, I just ordered a Nitecore D4 - come on vape mail! Here are the deets and the best price I found:

This about chargers is great. Need to upgrade to a 4 cell charger. Ty … Also having a flashlight that uses18650 is handy for weaker batteries.