I understand. Maybe set up a daily sometime or when I get home in the afternoon I will log on. Pretty sure you will wreck me at blitz and 15|10 but I love playing.

My rating is only a bit of an indicator, I am very inconsistent and my rating goes upa and down all the time. Sometimes i have some brain farts or can’t see things clearly for some reason and drop down to 1200 and another time i get close to 1400. I am just on a downwards spiral again i think. Just lost 40 points the last few days.

Perhaps we should open a chess thread and see who else is playing?

It’s been so long since I’ve played blitz that you shouldn’t have any issues, lol. I normally do three days so I can avoid the brain farts. But even then I can make horrible mistakes.

Go for it. I will happily join in.

Ok, so a few of you know 2016 kicked my ass in a way I only thought 2015 did. It’s having a strong finish and I won’t see my baby for Christmas for the first time in 25 years. We had to put down our dog of 15 years and he was special enough that the vet cried and had to leave the room. WTF does this have to do with a Whiterose Custom mod? Glad you asked.

I’ve not been on much and didnt realize my homey had started making mods until the day of the first raffle, around when I put my dog down…anyway, I ordered a pwm and a dna and told @Whiterose0818 to build them the way he wanted.

So this one is based on the NLPWM board. In the pic below you should note that the display is flush with the front of the housing with essentially no gaps. The buttons are very positive and clicky. Notice that this is a very big mod…it has a 225A continuos discharge rated lifetime warranty LiPo. This is why that huge dripper that only works right on my 200W mods is sitting on top. 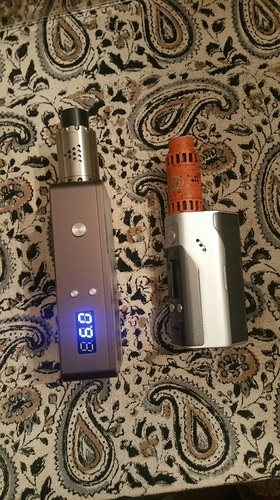 Nice looking, eh? So, when I hear the word “custom,” I’m thinking CUSTOM! I asked to have a little apropos verbiage put on the back spine…my company makes laser marking equipment, the words on my mod wrap around the edges. That’s a pretty impressive thing to be able to do, fyi. Here is what Whiterose did: 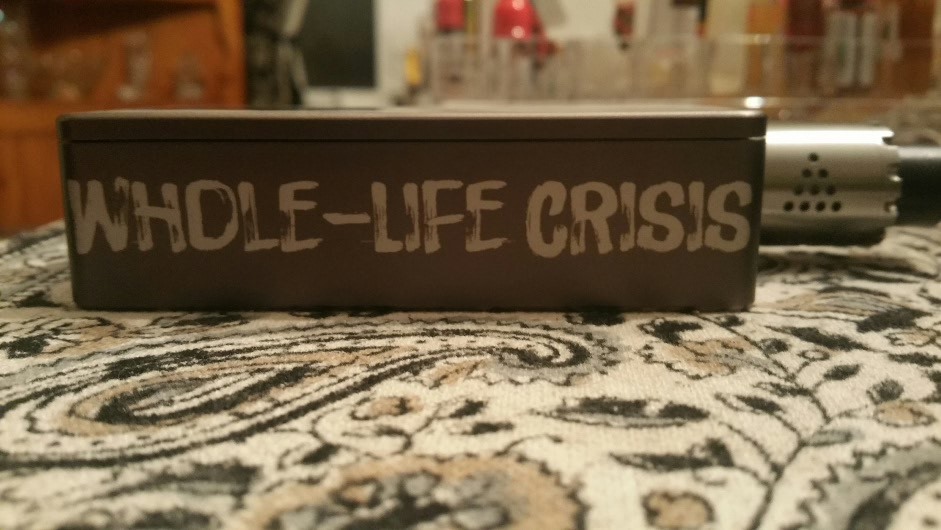 Pretty cool. He asked if I wanted a picture on the side. With having just put my dog down, I wanted this picture of my friend: 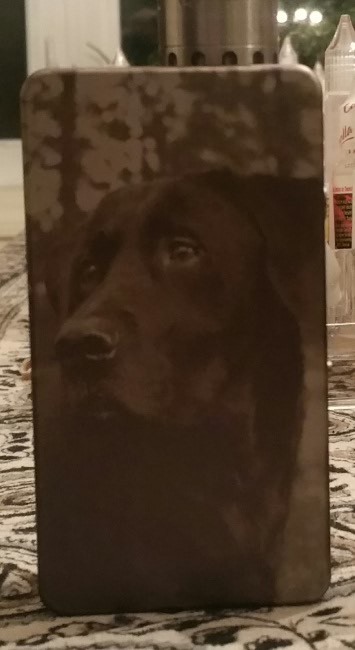 Now we’re really getting somewhere! He said I could even do two pics. Well, my other best friend in life is also pretty sexy. I was going to get a picture of her doing dishes (I LOVE this woman) but I decided to go for this: 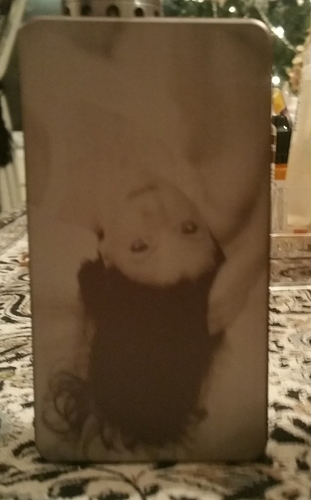 Ok, so that should give you an idea of what a custom mod can be on the outside, how about the innards? First, the cover is magnetic. Despite the fact I didn’t quite have that monster battery seated, the seems are tight enough that you need to use the elegant little indentation at the bottom to remove the cover. Behold: 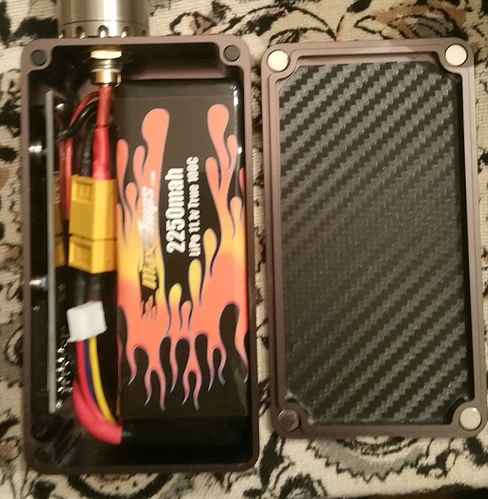 Yall see the carbon fiber one the inside of the cover? That’s just a classy touch. I’m an electrical engineer and a colleague and I looked this thing over literally with two different jewelers loupes for something to complain about (as engineers do) and were both simply impressed. His conclusion was “really nice buttons!” having already been impressed with the laser marking.

This piece of art is special to me in a lot of ways. Whiterose did a fantastic job not on just the hardware, but on the sentiment. It wold be a special mod to me if he had just assembled it, as I consider him my friend. But, it means so much more as I’ll be solo with it this Christmas and beyond. But I know, at minimum, I have another seriously kickass mod coming before too long.

@Whiterose0818, thank you, with all my heart. It was worth every penny and I still haven’t built an atty for it! I’m gonna do that now.

Here is to 2017 and your luck turning around. I don’t believe in higher power but I do know life is like a deck of cards. Here’s to getting a royal flush. Play it like you mean it.

I’ve got it built with 10 wraps of 23ga A1 kanthal, widely spaced coil on a 4mm ID, wicked with hemp. Um, I may need to reduce my nic with this thing. Those that know me know I only vape TC on DNA200 with the exception of this mod. I’m going to vape it a few days before reviewing that. What I can say is that it heats much faster than a 200W DNA with a 120W 0.5s punch on 20ga Ti, as one would expect for the smaller wire and monster power. I’m vaping it at roughly 100W. The hemp is still breaking in.

Also, I apologize if I gave the impression that my wife had passed as well. She hasn’t, but we miss each other desperately. She is tending to an ill family member 1800 miles away indefinitely and just texted me how much she misses me.

This post has made me feel sad and happy all at the same time. Here’s hoping 2017 is your year for good things

This piece of art is special to me in a lot of ways. Whiterose did a fantastic job not on just the hardware, but on the sentiment.

That is a beautiful mod ! Sad but touching testament and memorial ,thank you for sharing! Wishing you a more joyous 2017!

Shiiit, having a ‘best friend’ who’s been with me through the worst period of my life and is now pushing 14 years, deaf, limps and is a sandwich short of a picnic this just absolutely brought a lump to my throat , I know the day is coming, and your post slayed me man

So sorry for your loss, an amazing memorial

If it’s any comsolation, he had a really bad left dog arm for 5 years, cataracts, bad hind legs for 6 months, but it took a softball sized tumor at the base of his tongue to put him down. They prepare you I think…just enjoy your friend and try not to think about the downside if you can.

Hey guys, this is a happy thread! I’m sorry, engineers are typically seen as negative. I like to think I’m pragmatic. THIS MOD KICKS ASS! I guess I did too good a job of explaining why it ended up looking like this and being built this way. My aim was to show everyone the beautifull work and how a custom mod likes this makes even my ltd. abalone efusion duo seem pretty ugly. I had a great dog, my wife is way hotter than I deserve. I divide my time with it between vaping and staring.

I couldn’t quite break the hemp in last night as my 4-6mg nic was killing me last night. Granted I am using hemp, but I’ve had nothing approaching a dry hit yet…check out my hemp thread, because especially for non-tc mods, hemp is the most bestest wick imo.

I will try to get a good reading on power consumption today at work, but I know already it’s closer to 150W that I am vaping. The flavor is different than TC…and the nic is kicking me a lot harder than that Reuleaux you see with the excellent alliance dripper on top. So far, it’s a good wake-up mod, not the least of which is because I turn on the lights to admire it. Geez I love this thing!

…and sorry for all the typos and formatting. Thsee post are 100% via phone.

The photorealism achieved with this particular laser engraving is impeccable. Excellent choices and brilliant execution. Kudos to you both, and especially @Whiterose0818 Nothing short of amazing!

I agree the picture quality is simply outstanding @therabidweasel and @Whiterose0818 ! Whiterose0818 will the laser you recently purchased be capable of scanning a picture and then reproducing this same result? That is some amazing work right there!

Not sure yet…still working on it. Lack of time, incoming orders and upcoming bulids are making learning challenging at the moment. Might have to wait til after the holidays.

I am sure you are going to have plenty of orders!
Outstanding work my friend !

I just realized that was pretty poorly worded on my behalf.
Lack of time and an increase in orders and lots of upcoming builds has limited my time to fiddle with the engraver.

Wish I had something brilliant to add but @therabidweasel got me too choked up. Much love to you brother. And excellent use of the English language in offering the much deserved praise for @Whiterose0818 craftsmanship. I’m so enjoying the pics and the absolute artwork happening here!

Thank you and I apologize for the delay in saying it.

Boyhowdy, provided I stay where I am I’ll be able to offer my homey @Whiterose0818 some VERY advanced technical support in getting running. That said, wrapping around the corners is a quite expensive option for markers…I design those optics…may not be possible, although there it’s conceivable.

In addition, even though I can help with getting started and troubleshooting, this photo quality is some of the highest I’ve seen. The system that made them may have been ludicrously expensive. Like, cost of a house expensive…but the market is also changing rapidly and I am very behind-the-scenes. It’s also conceivable that whiterose’s could do this.

In any event, it will likely take a lot of practice.