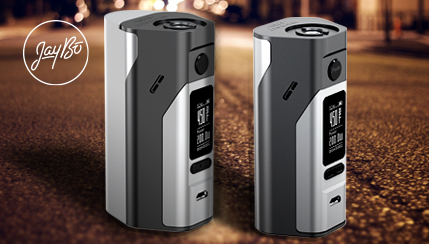 Reuleaux RX2/3, an updated version of Reuleaux series, designed by JayBo, features the replaceable back cover for two or three cells


Opions and thought from there previous products to this one? Never owned anything above 50 watts. So new territory
1 Like
Chrispdx July 31, 2016, 4:03am #2

It’s a good concept to be able to go from two to three ect. I know a YouTube video review questioned the longevity of the third battery compartment.

Personally, my two battery mod is all I need. I sit around 50-80 watts…maybe 90 is the highest I’ll go. I have no interest in the size of a three battery mod or having to charge three batteries at once.

That was my thought but he’ll idk anymore. To many mods and tanks and multiple tanks require multiple coils. I just need to get new mod finally and having a hard time choosing. I like the idea of the dna ones but way to expensive. I like the look of lavabox…too much. And that when I saw these one day and all I can thing is I love the black one and blk/red…deadpool…gotta have it…lol

I know what you mean. So many choices. DNA’s are coming down in price.

Personally since I didn’t want to afford 1 dna device I got two ipv5’s. It comes with a yihi chip. The device is working great for me…built like a tank (yup, dropped one on concret from 4 ft and still works). And has a great review on (spelling error) dslvapes.

Then again there are a lot of people who like the rx mods. There were some questions regarding there last two releases and the 510 connection. But I cant speak from experiance.

I was reading about that and apparently there last mod the s version was a fixed version. I read that on underground vape last week I think. Or maybe somewhere else…lol

Doesn’t look like it would last long to me simple is better in my world.

I’m kinda partial to both simple but elegant thinking. And also look and quality appeal to me. As well as functionality

This is why I hate power windows. Switch alway breaks the day after warranty run out.

Roflmfao. Speaking of mine on my driverside on my nitro works only when it wants too…lmao

I love the look of the 2/3 in two cell mode. I have the original RX200 and before the 510 gave out I enjoyed the hell out of it. The only other problem with it was that it was not convenient to take around due to the size and weight. It fit very comfortably in the hand, but not in the pocket. and if your wearing sweat pants or shorts with an elastic waistband, you better hang on to them because the weight will pull 'em down. The 2/3 has the upgraded 510 connector and the 2 cell mode will eliminate the weight and pocket issues for me. I’m seriously thinking of getting one.

Me too. The option of using 2 batteries would be nice if there aren’t 3 fully charged. How long have these been available? I only see one seller on ebay ($55) but they are in China.

lol they seem to be a one trick pony lately with all the rx variations.

I am really enjoying the Reuleaux RX200S
It is great with Avocado 22mm or 24mm, Alliance V2+, Tsunami 24mm, TF-RDTA, Subtank mini’s, and more.

Even though it is in rotation, I grab it all the time.The last couple days it has been wearing a Kanger Toptank with 0.5ohm stainless steel and an extra wide bore tip made by @Machinist2. Direct to lung, chucking clouds, and sweet, sweet flavor at 25W Has 3 new 30Q’s married and been lasting almost 3 days before a charge is needed. No 510 problems with over 10 tanks/drippers. The picky TF-RDTA even likes it.

Some options for you:

I’m thinking of getting one from Efun.top. I can be patient and wait. The sale price ends 8/1.

Thanks for the links. Yeah that’s a good price. I can see my local shops selling them for ~$90 like they do the other rx versions. I’m surprised they stay in business.

The 200s and the 2/3 both have upgraded 510 true spring connectors. Shouldn’t have any troubles with any RDA or tank.

About time. So they no longer go by the “who said you can use any 510 tank/rda you want?” mantra anymore.

well…until something goes wrong, then it’s your fault - heaven forbid they admit to inferior craftmanship.or cover a repair/replacement.