It’s just occurred to me that in our hobby it’s possible make flavor combos that look wrong, but could in fact be winners. When we cook we avoid certain flavor combos at all costs but sometimes we don’t mix ingredients because of their physical features, texture, moisture content etc. In the mixing world we have no physical restrictions, only flavor compatibility and personal taste.

For instance I’m currently working on a tripped out watermelon cake, simply because I can. I’m using flavors that wouldn’t work when cooking. Adding watermelon to cake batter and baking it is preposterous right

Anyways I found a mix (in a cup of water) that tastes interesting and unusual and I’m going to mix any minute now, no idea how it’ll turn out.

Is anyone else mixing weirdo juice with any success? I’m curious hear from the rest of you about hideous flavor combos that turned heavenly.

Never thought about like that. Definitely something to think on.

Similar to adding a square or two of unsweetened dark chocolate and vinegar to chili. It makes more of a rich mouthfeel plus replaces the acid that’s lost in commercial canning. I’ll try adding some FA tuna to a cake recipe and see how it turns out

Is there a potato cake concentrate out there? A+B = fish cakes.

Tobacco custard comes to mind. Noooobody would eat that but hot damn its nice to vape!

Oh yeah! Amazing what you can blend tobaccos with. I’ve got a mix with RY4 double and sweet tangerine. 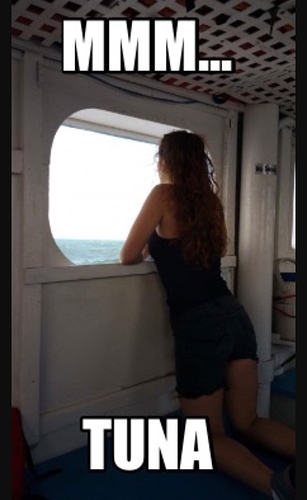 hey! that’s my girlfriend on that ship. hope she didn’t smell like tuna.

Noooo no, …wasn’t so much tuna, but a light scallop flavor…slight tropical twang to it

so she cheated on me! that bitch. and you ate her? tasting like shellfish and coconut? bro! you…are sick. hope you are happy

hope you are happy

Not fluffy tuna but I’ve had it in the works for months but haven’t ordered up the prime components as the wife will make her displeasure known to me when the CC bill comes in.

I wouldn’t say she cheated on u, she lied to me…said, “does this this taste funny?” To which I replied, “nothing funny about crab cakes!”

Ever add a little cinnamon to spaghetti sauce? Out of this freakin’ world good! Adds a really nice bottom note to the sharpness of the tomato.

skyline chili i think from ohio adds a bit of cinnamon to their chili/spaghetti sauce dont they? need to check. its an odd taste but good

ya know? maybe what you tasted after eating my now ex gf…was remnants of me. nice thought huh?

Never tried Skyline chili or their spaghetti sauce. I’m on the Left Coast, so unless they manage to get it past the Big Mud I probably won’t be trying it anytime soon. Pity, really, as it sounds interesting!

most stores have it. guess people liked it so much that skyline decided to can it and put it in pouches. take a look next time at the store. if you cant find it there, i’ll send you some in the mail