So with all the talk about DIY vs commercial liquids i realised I haven’t bought any juices in about 5 years apart from a Beard #5 and a one shot mix. I’m quite happy with my few diy recipes that I’m using but now I’m wondering if I’ve missed any new developments or any gems that might be out there.

I’ve had a look at the juice section of a big vape online shop here in England and was shocked by the variety! So buying something just from the description is out of the question, I’ve done that before…

So please let me know if you are buying a particular liquid from time to time and why! I’d really like to try something new after years of happy DIYing. Not that I’d be unhappy eit DIY all of a sudden, just curious!

I don’t mind if it’s MTL or DTL, just let me know what you’re using
My usual prefs are
DTL
max VG or up to 70/30
1.5mg nic
Kylin m, Wotofo Profile mesh

I think you would be better off with some commercial one-shots. Flavor Chaser is pretty awesome and you might have heard of some of the sellers. @woftam is a seller and everything I have gotten from him is kind of addictive so in that aspect it’s bad. LOL spend too much money. They sell them at chef’s flavours too. I’ll post two of my favorites but I recommend going to look for yourself.

Only The Best | Flavor Chaser

Only The Best! DIY Flavor Chaser brings together some of the top mixers in the industry to create unique concentrated one shot blends for you to enjoy. We have many one shot concentrates to choose from including fruits, deserts, bakeries, and...

I havent bought commercial liquid forever …I buy one shots to support the mixers …The only one shots ive finished were Dmango Unchained by @woftam and Loopy Cake by @lukeloop …There is no reason I haven’t finished the others except that I mix similar profiles for others and enjoy them . Plus im lazy sometimes so why mix something similar to what I am already mixing ?? One of the people I mix for loves a company called HUMBLE and I have made similar profiles for them but they swear by Humble which I cant stand too sweet and I dont get any difference ( layers ) in the liquid …So they are super sweet and Lineal but whatever Im done mixing for this person and when they cant get liquid one day the Price is going up bwhahahaha

It’s been a long while since I vaped this, but it was my ADV for 3 yrs.
(And I don’t care for Mango flavors) 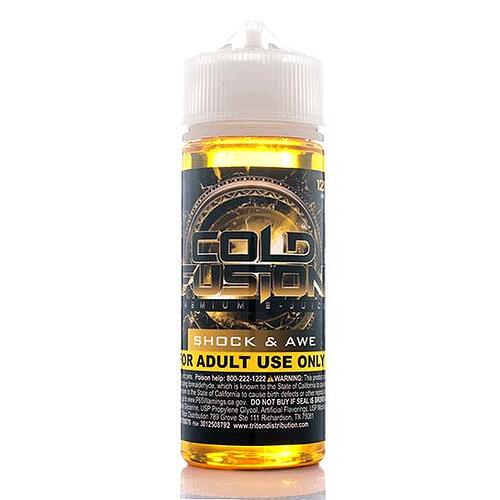 image545×545 26.3 KB
As jaw dropping as the name implies, Shock & Awe will blow your mind with its refreshing explosion of peaches and mangoes, followed by a secret blend of hidden flavors that will poke and prod your taste buds throughout the inhale/exhale.
Primary Flavors: Peach, Mango, Mixed Fruit
.
I haven’t even attempted to clone this yet and can’t buy Flavored ejuice in my state (even if it’s 0 Nic), someone on the forum was kind enough to sent my 3 / 60ml bottles of this (0 Nic) that I haven’t touched yet, maybe pull out a bottle and see if it’s still as good as I remember

One of my only commercial addictions…

Outdoors & Smores by Campfire is the savory blend of toasted marshmallow on a sweet graham cracker with a subtle note of melted chocolate.

D’Mango unchained seems to be the only one available around here.
@fidalgo_vapes are you sure the company is called Humble and not Humble Pie by any chance?

Buy from Humble Juice Co., a leading e-liquid company with quality manufacturing and free shipping, and choose your best vape juice flavor from our vast collection of premium e-liquids and salt nicotine products.

I haven’t bought commercial e-liquid since 2014 when I began DIY.

Boss Reserve, but it’s always sold out so I switched to killer custard, which I now make myself.

One those juices I wouldn’t even TRY to clone: it everg says what’s in it in the description but good fn luck matching it

Oh I learned the hard way I can’t clone liquids… I just steal other people’s recipes and tweak them a bit.

I wouldn’t be surprised if Boss Reserve also has small amounts of bourbon or barrel Oak flavourings or both: it’s got that liquor kinda taste as well as all the other flavours going on.

But yeah unless they ever release the recipe I won’t bother fooling myself into thinking I’d ever get the right kinda banana or the right milk OR the percentages of everything close enough to be happy with a clone.

…i’ve even got all the required flavours in the cupboard and just know I’ll be wasting them even attempting to clone such a complicated juice.

I’m convinced the commercial liquids contain things we don’t know about or we don’t think of. I’ve read an article once about additives which change the flavor perception and the mouth feel which for me was always impossible to clone. Even if i had the flavors right to a degree that the smell was similar, the taste and mouth feel especially with creamy flavors were nowhere near the original.
It’s also taken me a while to learn that a lot of the cream flavors make no creamy mouth feel at all, sometimes the opposite is the case.

It’s also taken me a while to learn that a lot of the cream flavors make no creamy mouth feel at all, sometimes the opposite is the case.

Yeah I find most straight creams and milk have not mich too offer really.

Though, recently creating my Killer Custard mix I landed at a total flavour of 24% which is MUCH higher than most DIY recipes I’ve seen tossed back and forth, yet at that level it tastes so close to the commercial I’d have to vape them both side-by-side to tell em apart.

Could simply be that: ther amount of flavouring in commercials: since they get bulk flavourings that cost them mere cents per bottle to mix, they can load the bottle up with that amount of flavoring without even considering the cost.

For us it’s considerably more expensive, so I think people are more hesitant to throw large amounts of flavorings into single mixes in case they don’t turn out.

I’m not shy at all now about going up to 25%, though I’ll do it obviously in little 15mL bottles and see how they go before creating a 60mL mix with that much, but yeah if that KC mix is anything to go by, I reckon plenty of commercial juice is up around that 25% (or more) level of flavorings.

The reason why I try to avoid high flavor content is just that I am slightly allergic to PG, at high levels I get skin irritations. Most of the flavors i’m using are not (or haven’t been) available with a VG base instead of PG. Maybe it’s time to check if they are now available.

Yeah sane with nic bases: I only ever see flavours in PG.

Pity, many of us would probably choose VG instead or at least kone the option…

I know there ARE places online that offer pg/vg ratio options for nic bases and there’s probably places offering flavours in VG but I’ve never heard of the latter.

Nic is not a big problem, I still have 72mg nic base and only use 1.5% in my mixes. I’ve done some research on VG based flavors a few years ago but at the time it was disappointing. Especially the ones where you want to use more than 5 % would be nice to have in VG like CAP Vanilla Custard v1.

I’m pretty new to diy e liquid and I’m looking for a clone recipe for V2 menthol eliquid, no nicotine. Do you have any recipes? Thank you!