The Japanese Ministry of Health? Has anyone heard about this study or have any counter arguments? Obviously, I’m suspicious of these claims but I’d love to have some ammo to debunk the study or shed light on the motives of why this study can’t be trusted.

New research has found electronic cigarettes to contain even 10 times more cancer causing ingredients than the tobacco products they are supposed to save us from.

The listed reference of that article is over 3yrs old

But in looking at the article it uses as a reference. The last two paragraphs stick out

Writing in the British Journal of General Practice, Prof Robert West and Dr Jamie Brown from University College London said that for every million smokers who switch from tobacco to e-cigarettes, more than 6,000 premature deaths would be prevented in the UK every year.

If all 9 million smokers took up e-cigarettes instead, 54,000 lives could be saved, they said.

It seems to me the writer of the article you linked has one goal in mind . Ecigs are bad and only took what appeared to be bad from that article that is over 3 yrs old

Yeah buried way at the bottom. I’m still combing through it all too. 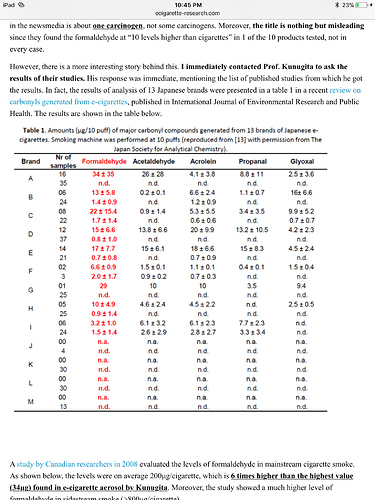 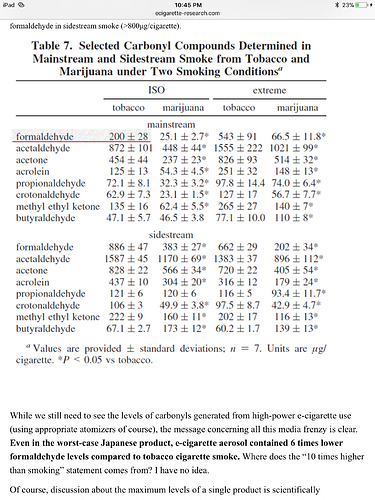 Here’s a more recent write-up/rehash of the article(When I went searching for the original, I came across this and am reading it now…)
http://www.ecigarette-research.org/research/index.php/research/2018/262-flavors

I keep his site bookmarked for just such events, as it appears about every six months it seems that someone will decide to dig up a study that has some wildly fallacious conclusions based on some less-than rigorous methods, dust it off and write a wildly “ERMAHGERD!!! VAPES ARE EVULLL!!” sounding paper and slap it up on the 'net. Saw the same “paper” posted over on /ecr, so I’m left wondering when it’s going to hit all of the bubble-headed bleach-blonde’s teleprompter for the evening news. Should we take bets? CNN? Fox? MSNBC? Who’s first in the race to blame e-cigs for everything bad this time?? Tune in to find out!

FIVE MINUTES LATER EDIT So, after reading the second link I provided, it refers to a study performed in the US, not Japan. Dr. Farsalinos still does an excellent job at getting to the problems with the study as it was reported(He’s kind of well-known for that, which is a Good Thing) It’s still a good read-give it a few minutes of your time. It also sheds some light as to why these studies are so damned flawed-They don’t provide all of the parameters used, whether it be devices used, power settings applied or juices tested. If you’re going to bring out something this incendiary, you’d best provide ALL of the data points and methodology used so that other scientists can verify your results. This is the biggest problem with science today: Company A provides funding for a study, scientists wanting MORE money from Company A will start with a conclusion and work backwards to ensure that the methodology/parameters will support that conclusion.(DISCLAIMER: I am a layperson, not a chemist/physicist/ultaevil ne’er-do-well with a lair and billions of dollars worth of sciency-type stuff to plot my machinations upon the world. Take everything said above with said grain of salt, if you please.Cheers!)

No doubt. Followed immediately by a Cealis commercial with a bunch of dudes sitting in a circle singing about their whimply wigglies. Demeaning to watch.

Tobacco smoke contains over 4,000 chemicals, of which more than 70 are known to cause, initiate or promote cancer and are called “carcinogens”. Exposure to tobacco smoke increases the risk of developing cancer.
source: https://www.canada.ca/en/health-canada/services/publications/healthy-living/carcinogens-tobacco-smoke.html

I smoked over 38 years, my personal observation is that smoking is more dangerous than vaping.

It often seems that anything which we enjoy and doesn’t completely support clean living gets picked up as a potential risk at some point. Who remembers the big fuss about bacon maybe increasing risk of cancer slightly?
It also feels quite biased at times. For example, our local tv news has , on average, one report a month on the dangers of a sedentary lifestyle. I’ve never seen any on the equally severe risks from overexercising.

Oh Oh Oh… one other thing, here is a fun read…

This is the sort of news and support we need… https://www.cancer.org/healthy/stay-away-from-tobacco/e-cigarette-position-statement.html

I agree it’s good news. However, it’s still a half-assed job of it. Here’s a quote

“The ACS recommends that clinicians support all attempts to quit the use of combustible tobacco and work with smokers to eventually stop using any tobacco product, including e-cigarettes.”

This stuff baffles me.

“The ACS recommends that clinicians support all attempts to quit the use of combustible tobacco and work with smokers to eventually stop using any tobacco product, including e-cigarettes.”

This stuff baffles me.

It’s sensible to me. To acknowledge that vaping is 95% safer than smoking still doesn’t mean it’s as good for you as breathing pure clean wilderness air. These doctors want to eliminate every risk. It’s reasonable to ask if they’re as zealous about fighting air pollution but that’s another argument, lol. Some people might be able to wean themselves off vaping eventually but I don’t intend to try. It also helps me to not nervous nibble so it’s not only to not smoke, it’s to not over eat as well.

I’m a Registered Nurse, so when I started vaping only this February my medical background sent me into research mode. (2 weeks holidays and all I did was research, oh and quit the icky stickies!)

What I found was that most research is flawed in someway or another and it was extremely hard to find any research that my background knowledge told me made sense. But for those with no medical background it would be quite easy to be tricked.

But what I’ve noticed in health improvements in myself in just 2 months outweighs the poor research flooding the media.

These are just a few things I have noticed in such a short time, now it is hard to know the long term effects. But I am under no illusion that vaping is perfect, but it is so much better than cigarettes in the short term.

I have also been discussing E-Cigarettes with highly respected ENT and Plastic surgeons and they were unaware of much research into E-Cigarettes. These doctors conduct a lot of research and the advancement I have seen in my time in this speciality is amazing.

Yet, most of the patients are heavy smokers and drinkers over a long period of time, so my question is why don’t they know?

Now, I’m in the back country of Australia, and we are even further behind than even the Kiwis.

I believe they are more concerned about loosing taxes on cigarettes, but are forgetting the bigger picture. So much money is spent on health care in Australia due to cigarette related medical conditions.

We are very lucky in this country, health care is free to all! That includes massive surgeries on patients that spend more than a month in the hospital. I’m not begrudging the medical care we give, I just think if some of that money would be more beneficial researching E-Cigarettes.

I should of been clearer. I was responding to it referring to e-cigs containing tobacco.

This article might be of interest to you, being in Australia.
http://colinmendelsohn.com.au/index.php?cID=595