Article soon to be published in the Yale Journal on Regulation. Very good informative read!

This located from reading this article:

It should surprise no one that Big Tobacco supported the FDA's decision to regulate electronic cigarettes because Big Tobacco stands to benefit from such regulation.

Wow. I’ve barely started reading the abstract, but dang. Go them. Saving that one. Thanks!!

I read that, about a month or so ago. That’s the best write up I’ve seen, on this tangled regulation mess.

I highly recommend it.

Great article and an even better journal!

We will not be stopped 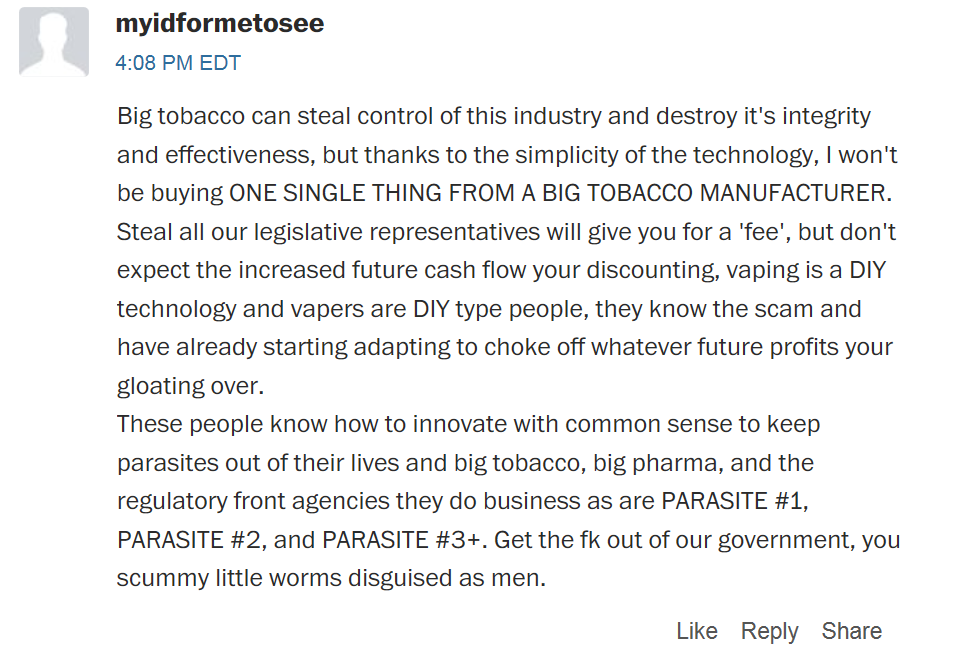 We will not be stopped

I like his attitude as well BUT, those who can self-sustain are a handful compared to the number of Vapers there are. Those who can blend their own juice are rare compared to the number of people who vape. Those who can build a coil and wick their atty are even rarer. What about those people? On August 8, 2016 vape shops will not be able to even build a coil for a customer legally. If you alter product, you are then a manufacturer and subject to FDA approval for said alteration of product. It’s ridiculous, yet so effective, how the regulations are written. Ask yourself this, just how many people can self-sustain if the Tobacco companies take over the industry…

Funny, here’s a quote from one of my posts I said just 15 days ago. Sounds very much like what they expect for the future of the vaping industry, according to this article…

Those with the money survive. I have said this once before, watch, once the Tobacco companies buy up all the major players in this industry then suddenly Ecigarettes will become the miracle cure and as good as a wholesome glass of milk. I’ll be real surprised if we don’t see this happen. Once the tobacco companies own it they don’t mind paying the same fees on Ecigarettes as they do on analogs. When you own it all, who cares.

Truth be told, myidformetosee says buying from the tobacco companies is something they will never do, but, as everyone knows, he, or she, in the future may think they are buying from elsewhere but could actually be buying from a tobacco company since their association can be so well hidden. Most people are not going to spend the time to research just who owns what companies even if the information was readily available, let’s face it…

Sorry for the rant but as someone who has fought to get people off the cigarettes I have to be realistic. Few people are in a position to continue to vape without the sources available today. VERY FEW…

Few people are in a position to continue to vape without the sources available today. VERY FEW…

Very true and valid point. It comes down to us, those who Can do those needed skills, to educate as many as possible for this very reason. Trade secrets aside, it is a community is now is not the time for greed. If we are to survive as a community everybody who can help others, should. Personally, most of my juice ‘customers’ dont know much of anything about vaping, or juice mixing, coil making-wicking etc… But i have taken the extra time to bring my bag along with me to sit with them and teach them some of the basics to help build their confidence and have even tried referring all i can to join us here on ELR to learn and expand their skill and knowledge with juice and their vape equipment… But like the cliched Matrix saying goes “i can only show you the door… You have to walk through it.”. Sadly they only were willing to learn the wicking out of necessity, but couldnt care less about making the juice or coils for themselves.
At this rate i feel like by this time next year, something 90% of the vape industry will be as black market, and who you know, as the illicit drug industry.

Sad part is, if they used the same mind set for the automotive industry, you couldn’t go out and get the oil changed in your car or even get new wiper blades without regulators deaming they were sanctioned and approved. Nothing personal to other countries, but it’s a lot like the “stamp act” that was imposed on us that helped start the American Revolution, but this time it’s our own country doing it us.

I found a link to this video in the comments.

90% of the vape industry will be as black market,

Sadly the US has learned jack shit from prohibition and the subsequent rise of the Mob.

They learned all they needed to.

They learned that the Baptists will drum up the support, to keep the Bootleggers’ money rolling in.

That’s the best write up I’ve seen, on this tangled regulation mess.

Agreed. Excellent article, but unfortunately few will see it or take the the time to read it. Learn to become self sufficient in all aspects of DIY, horde a good supply of liquid NIC and vape on. Our current vaping environment will be changing soon.