Do you think RY4 Double would work?

I have no idea what the British Gold tastes like

But tobacco with a caramel hint is def ry4d

Maybe this will sort you there are a few variations.

I am not a tobacco vaper but I quite liked it

Maybe Fa Cowboy Blend Tobacco with a smidgen of caramel

Best Marlboro flavour I have had has been from Bestcigliquid they do 2 versions USA Mix (like Marlboro Light) but this has more of a caramel and sweetness to the finished flavour.

The also do USA Mix Red or Red Tobacco this is more like the Marlboro Red, but weirdly I found not as strong as the USA Mix version. Both work really well as they are NET Tobacco’s

Had a look on the site they do them in straight up concentrate form or Easy Mix now, where you just add your own nicotine to the bottle supplied…

Hangsen do a good USA Red Mix concentrate, But I haven’t seen that on sale in the UK for a long time in concentrate form

Ordered the easy mix USA Red, I’ll let you know what it’s like

If you get the taste for NET tobacco’s you will end up trying a few, I reckon…

When I copied the link for you, noticed I had a basket full on the site from a couple of weeks ago. Just cost me £20 as I decided to buy them. It is going to get expensive every time I provide a link and end up spending £20. Must resist…

Clawing away but can’t get out…

Both work really well as they are NET Tobacco’s

Are all of they’re tobacco flavors NET tobaccos?

Of the few ones I have tried, the only thing that makes me wonder whether they’re absolutes or NET in the truest sense is the mixing %, 5 - 10% I have found is the sweet spot for the ones I have tried. Which seems a little low for NET Tobacco’s, which are usually around 25%.

But they all tasted fine to me and the Black Mamba is my all time favourite, tobacco flavour. Although I have high hopes for the RY6 coming in my next order, based on memories of the Hangsen RY6 I started with 5 years ago, but haven’t tried in over 3 years now.

If you look under Multi-Buy - Samples. They are doing multi packs of concentrates of your choice at very good prices, if looking to try some of their products?

Of the few ones I have tried, the only thing that makes me wonder whether they’re absolutes or NET

Could be they obtain their offerings from a vendor which uses the same type of NET process such as Hangsen employs:

(… then may add extras to the mix for enhancement)

Tabanone – A chemical that is naturally found in Turkish tobacco. Tobanone is commonly added tobacco cigarettes for its unique flavour. Addition of Tabanone to e-liquid creates a similar tobacco flavour to these well known brands of cigarettes.

2,5 Dimethylpyrazine – A flavour additive that enhances taste and aroma in tobacco cigarette and many other food products including coffee and wine.

I found Hangsen tobacco tasty, but as you noted about your choice… the percentage used was somewhere between 5% and 15% in the mix for a good punchy vape.

I bought $20 worth of samples! Can’t wait to get them! I read some reviews on Facebook about they’re shipping being bad. Do you have any experience with that? I kind of feel bad bc shipping was free and I live in the US. Guess we will see how it works out!

So much information! I really appreciate you sharing! I’m not ready to dive into nets yet but have read a little about them! I want to get to understand tobacco flavors and what I like before I would get into it. I hated tobaccos for so long. Crazy how things change!

You are in a different part of the world to me, Ordered mine Wednesday, and had no dispatch note yet. But as I had already ordered and recieved 20 odd new concentrates to me, earlier this week and still need to get them mixed up for some samples to work on. I am in no rush for them tbh.

I’m not ready to dive into nets yet

Welp… making NET is about as easy as that.

…and it’s tasty to boot!

Well this thread has tempted me into purchasing a load of samples: black mamba, usa red, ry6, ol capataine, space shark, uk tobacco, delux tobacco, brownstone, stirlingo cream, desert ship, sultan, mrs jones. One of the first juices I bought and liked was a tobacco in the UK by B-Juice. I think that may have been NET, it is the only tobacco I have had that actually tasted like tobacco. I havent purchased that many tobaccos since doing DIY but have found that the ones i have liked have been ones that to me dont really tasteparticularly like tobacco such as Glory, Inawera 555, Soho, AM4A. The flavour arts more tobacco flavours such as perique, cuban and some other companies ones I have found revolting. I have a few tobacco recipes I enjoy but to me they arent real tobaccos like B-Juice was. Hopefully testing these I will find a few that help me on making a proper tobacco recipe of my own and what I want to get out of an RY4 and havent yet as its the remaining flavour profile that I enjoy I am still to nail something Im really happy with of my own.

Got my order and instructions 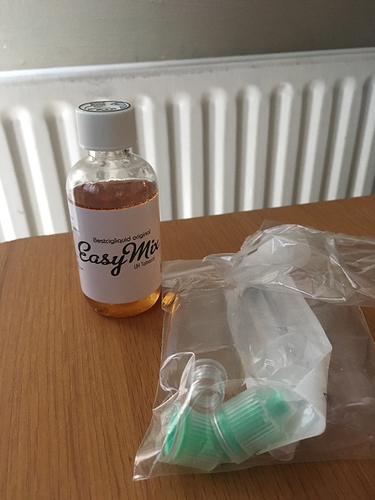