I’m Japanese and recently started making my own liquid.
I have a question about liquid steepness.
I want to know how to steep everyone and how to save your own liquid
After making it, I shake it until it turns white and leave it in the refrigerator. It seems that some people leave the bottle open at room temperature. I know there is no correct answer for steep, but I would like to refer to your method

I just shake it and put it in a drawer, in the dark. The bottle closed, the flavors are volatile. And open it undergoes more oxidation. I’ve never put it in the fridge, what I did try is to give it some heat, but I don’t think it’s worth it.

After mixing, I would shake hard and then steep in a dark and dry place, with the cap closed.

Steeping all depends on what you’ve mixed up, most fruit mix can almost be mix and vape, some with a short steep time,
Custard’s will take a longer steep time from a week to a month or more,
We have some scary Smart people on here that has been doing this from the start, and most just mix and put it away for a while closed up,
You’ll be hearing a few speak up here in the next day or so, happy steeping

I put the concentrates in the bottle, add 50/50, then PG or VG depending on the blend and finish with nicotine, After that I shake for around 3 seconds and put it in a drawer. Some steep for a week but most of mine need 6 weeks or more.

@Mouse7 welcome to ELR, and the world of DIY mixing.

You should do what works best for you, but I would recommend NOT:

Capped, well shaken, resting NOT in direct sunlight would be fine.

Do not overthink the process because it’s pretty simple. I’ve been mixing for nearly 7 years and have tried multiple methods. This is what I do…
Mix up recipe, shake rigorously for about 30 sec and put it away in a drawer or somewhere dark for 5 to 14+ days (depending on the recipe ingredients). Every few days give it a quick shake. That’s all it takes.

What not to do…
_Use any form of heat to speed up the process. There is no such thing as “speed steeping”, regardless of what other people say!
_Any type of blending technique that produces micro bubbles (oxygen) turning the liquid milky white is usually not good. Oxygen affects nicotine and will begin breaking down (oxidation).
_Never leave the bottle un-capped. Doing so allows flavor molecules (volatiles) to evaporate. It also exposes the liquid to oxygen.

Unless you invest in a homogenizer, which DOES work for steeping, you’ll need to just wait it out. Time is best for steeping!

Mix it shake the hell out of it leave in a dark cool place. Mine is in a closet under the stairs in a file cabinet. Stays there for as long as it needs i do a two week test to see if its good or needs more time. Everything i mix is always two weeks because i have others im vaping so i just let them sit

Ditto to the above.

Mix and just leave in a cool and dark area for a minimum of two weeks, shaking daily if I remember.
I just leave mine in a drawer until I’ve tested them and then introduce them to my current rotation.

If I don’t think the juice is ready after two weeks I just put it back in the drawer and test it again a week or so later.

Only ones i leave cap off of is my rf sc. if i dont they do have a little harshness too them

as flavor molecules will escape, and never return.

Molecules will evaporate, which can lead to a decrease in the concentration of the flavour. Sorry for being fussy but I just debunked a ‘structured water’ paper as a Christmas favour for a friend, so still in a fluid dynamics Nazi mood…

Deferring to your ‘fluid dynamics’ I have edited my comment above.

Only ones i leave cap off of is my rf sc. if i dont they do have a little harshness too them

I think way back when, there were a FEW times, I off gassed when I had alcohol flavors, but even still using them, I’ve not revisited it.

Steeping. Am I doing it wrong? Beginners

@rcleven nailed it @Russ24. It’s really only helpful if you use the same recipe over and over, and can just use your pre-mixed flavors in ONE SHOT (no pun intended), rather than breaking out ALL of the individual flavor bottles each time. Getting everything to “gel” within the VG is typically the waiting part.

Got to do what tastes best for you.

Thank you for your feedback! From now on, after mixing, I will leave it in the drawer without opening it. The reason why the liquid flavors I’ve made so far fly and doesn’t taste may be because it was opened too much.

I have another question.
About the container for steeping the liquid
Is it okay to use a unicorn bottle for liquids, or is it better to have a glass sealable bottle? I’m wondering

If you have glass bottle, that would be better, but non ldpe plastic bottle also good enough.

I’ve used ldpe with zero fade issues. I don’t get around to using some mixes for months there is no difference in the more recently used of the same recipe. I do keep concentrates in pet much to my fingers regret.

A plastic bottle is OK, though using tall and thin bottles is recommended: trying to maximise the surface area will speed up steeping. 60ml twist tops are my standard but I do use glass for blends with terpenes and cannabidoids as warm bath steeping is needed.

I put my whole stash and steepers in the cold I mean freezing cold furnace room which I should’ve done mths ago. But it is always cold and dark in there (currently in the basement apartment of a home.) 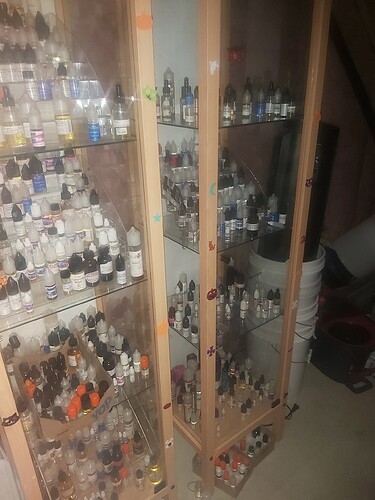