Drums of War in the Ongoing FDA Flavorings Inquisition?

Why don’t politicians see the damage they are about to inflict? In large part, it is because so many wrongly believe that e-cigarettes are as bad, or worse, than cigarettes. … many policy makers and members of the public do not grasp the benefits of nicotine harm reduction, because they simply won’t admit or don’t believe that e-cigarettes are less risky for smokers. … Why the misperceptions? … The antipathy is largely fueled by a long-standing distrust of Big Tobacco. The very name e-cigarette induces flashbacks in many public-health activists. They’re transported to a time when Big Tobacco touted allegedly safer ways to smoke - filtered cigarettes in the ’50s and low-tar cigarettes in the ’60s - that turned out to be nothing but false promises. … In light of history, public-health advocates’ skepticism about e-cigarettes, at least when they first appeared, was understandable. But genuine advances really can occur, and the evidence suggests that the shift from smoking to vaping should be celebrated, not decried. … While the benefits of vaping to smokers are being downplayed or ignored, the harms to teens are likely being overstated. … Unfortunately, the misconceptions surrounding vaping may be too well entrenched. A Kaiser poll conducted this month revealed that 49 percent of respondents support banning all e-cigarettes, not just flavored ones.

SALLY SATEL is a psychiatrist, a resident scholar at the American Enterprise Institute, and the co-author of Brainwashed: The Seductive Appeal of Mindless Neuroscience . She is a member of Health Professionals for Patients in Pain, an ad hoc advocacy group.

It would be nice if the answer were clear, but it’s unlikely that it will be for a long, long time. … The anti-vape cabal continues to publish studies on how e-cigs produce cancer-causing chemicals; how non-traditionally flavored products (read: mango, fruit, cotton candy, etc.) get more people hooked on nicotine products than non-flavored ones; and how it’s dangerous to have very little knowledge about what’s actually in e-liquid or its components, either the solvents or the flavorings. The pro-vape contingent, meanwhile, is holding a single party line: whatever the evils of e-cigs, they’re not worse than regular cigs. To that effect, researchers who extoll the relative health virtues of vaping submit letters, write independent blog posts, and circulate petitions calling for the retraction of certain so-called “anti-vape” studies, according to Bloomberg. Anti-vape researchers told Bloomberg the pro-vape criticisms are so singular that they feel “organized,” like attacks. The pro-vape researchers, of course, say that isn’t the case. It’s just science v. science.

Im not a bot or a shrill… shill w/e

No need to “protest too loud” (I should think) …

Imagine the diabolical software code kernels wherein machines “deep fake” known personalities. Similar to identity-theft - where someone opens and blows on public saxophones under the moniker of others’ names.

Nothing like inhaling a bunch of stuff that doesn’t agree with one in order to reduce allergic inflammation ! Nothing like inhaling a bunch of stuff that doesn’t agree with one in order to reduce allergic inflammation !

Just stumbled across a remarkably prophetic post from @BoDarc March '17

any attempts to get free of the SucK will somehow be bad “for our children” …this is a century-long tale/Sell. Expect more. Thanks for the heads up! DIY right here has been a singular shining example of global freedom …we’ll see …surely some kids will need saving soon.

Federal regulators are expected to announce a ban on electronic cigarette flavors other than tobacco and menthol within days, although it’s unclear if mint flavors will be allowed or reformulated as menthol. … Another possible exemption could be vaping products sold in vape stores rather than convenience stores … A sign of the imminent ban announcement came Monday, when the Office of Management and Budget said it concluded its review of the rule and cancelled upcoming meetings with industry and consumer interests. Conway also said an announcement was coming soon.

When I go here… https://www.reginfo.gov/public/do/eoDetails?rrid=129748

and then go here… https://www.reginfo.gov/public/do/eom12866SearchResults?pubId=&rin=0910-ZA56&viewRule=true

is what I am more curious about

Good find. Poked about there - but missed the meeting records (in order of meeting times on Nov 4):

I will let others “fill-in and link-to the blanks” where it comes to the other various “monetary stakeholders”.

Another possible exemption could be vaping products sold in vape stores rather than convenience stores, which is where the under-aged youth who are the focus of the ban often shop.

Conway has never in any way been forthcoming, straightforward, accurate. Probably another policy canard.

… the CDC and at least one prominent anti-e-cigarette researcher have not yet given up in their attempt to pin the outbreak on traditional e-cigarettes which they apparently despise. The CDC continues to term this outbreak “E-cigarette, or vaping, product use associated lung injury.” …

… The original name the CDC gave to the outbreak was VARI ("vaping-associated respiratory illness). The fact that it changed the name to EVALI, even after having quite conclusive evidence that traditional e-cigarettes were not involved, suggests that the CDC was intentionally trying to use the outbreak to implicate traditional e-cigarettes, despite the lack of any hard evidence. That they are continuing to use this name even after finding that every confirmed case in which testing was done revealed vitamin E acetate in the lungs confirms that this term was chosen to intentionally confuse the public into believing that e-cigarettes are causing the outbreak.

In addition, now that its back is against the wall because the evidence is almost conclusive in demonstrating that traditional e-cigarettes are not involved, the CDC is resorting to an explanation for which there is absolutely no evidence: that not one, but two substances are causing the outbreak. And they continue to insist that no single compound is associated with the cases, which is not true based on their most recent findings. …

… This contriving of a new explanation for the outbreak in light of evidence that it is not related to traditional e-cigarettes is not restricted to the CDC. A prominent anti-e-cigarette researcher has also developed a new theory to explain the outbreak: it is caused by a synergistic effect between nicotine and vitamin E acetate oil. …

… It is now quite clear that the CDC and many opponents of the use of e-cigarettes for harm reduction were actually hoping that the outbreak was being caused by traditional e-cigarettes so that they could use the outbreak to further demonize these products. They used the outbreak as an excuse to implicate e-cigarettes and even when the evidence began pointing in a different direction, they didn’t allow the evidence to sway their pre-conceived opinions or determination to put the blame on electronic cigarettes.

And now that their original theory has been blown out of the water, rather than acknowledge that the outbreak is due to a new thickening agent that was developed for use primarily in the black market THC vape cartridge industry, they are coming up with novel, contrived explanations in a last gasp attempt to be able to pin this on traditional e-cigarettes.

… It is now quite clear that the CDC and many opponents of the use of e-cigarettes for harm reduction were actually hoping that the outbreak was being caused by traditional e-cigarettes so that they could use the outbreak to further demonize these products.

And now that their original theory has been blown out of the water, rather than acknowledge that the outbreak is due to a new thickening agent that was developed for use primarily in the black market THC vape cartridge industry, they are coming up with novel, contrived explanations in a last gasp attempt to be able to pin this on traditional e-cigarettes.

I don’t think anything needs to be added to this !!

Here is the next apparent (planned) scum-vector for the CDC. Claiming the following (and who with authority will stop them), they will send the issue of their specious and transparent, immoral, and directly harmful to public health dis-information strategy, and all associated ethical lapses off into an “animal-model research la-la-land holding pattern” - distracting from their own profound failures, and buying time for legislators and policy-makers to further attack and decimate Nicotine vaping while the phony “jury is still out”. Bend over:

“We are in a better place in terms of having one very strong culprit,” said the CDC’s Dr. Anne Schuchat. Agency officials cautioned they cannot rule out all other toxic substances, and it may take animal studies to clearly show vitamin E acetate causes the lung damage that’s been seen. … The CDC’s Pirkle said animal testing is now a priority and might produce results within a year. “We really need the animal study to nail down cause and effect,” he said.

This (additionally) gives the FDA years of cover to “turn the screw” on Nicotine and delivery systems.

“Trump backs off flavored vape ban he once touted”

Everything seemed ready to go: President Trump’s ban on most flavored e-cigarettes had been cleared by federal regulators. Officials were poised to announce they would order candy, fruit and mint flavors off the market within 30 days - a step the president had promised almost two months earlier to quell a youth vaping epidemic that had ensnared 5 million teenagers.

One last thing was needed: Trump’s sign-off. But on Nov. 4, the night before a planned morning news conference, the president balked. Briefed on a flight to a Lexington, Ky, campaign rally, he refused to sign the one-page “decision memo,” saying he didn’t want to move forward with a ban he had once backed, primarily at his wife’s and daughter’s urging, because he feared it would lead to job losses, said a Trump adviser who spoke on the condition of anonymity to reveal internal deliberations.

As he had done so many times before, Trump reversed course - this time on a plan to address a major public health problem because of worries that apoplectic vape shop owners and their customers might hurt his reelection prospects, said White House and campaign officials. He also believed job losses tied to the ban would cost him as he sought to trumpet economic growth. …

… Officials said the blowback to Trump’s vow to ban most flavored e-cigarettes had rattled him. In an aggressive social media campaign - #IVapeIVote - advocates claimed the ban would shut down thousands of shops, eliminating jobs and sending vapers back to cigarettes. The president saw protesters at events and read critical articles. His campaign manager, Brad Parscale, privately warned the ban could hurt him in battleground states, said a person who spoke on the condition of anonymity to discuss internal deliberations. Trump was now upset with Health and Human Services Secretary Alex Azar, who had taken the lead in rolling out the plan, said three officials familiar with the discussions.

“He didn’t know much about the issue and was just doing it for Melania and Ivanka,” said a senior administration official who spoke on the condition of anonymity to share the discussions. …

… Whether or when the administration will unveil a new policy to combat underage vaping is now unclear. … Given Trump’s record of zigzags, some officials cautioned the president could reverse course again. Or he might back some ban on flavored e-cigarettes that exempts vape shops. 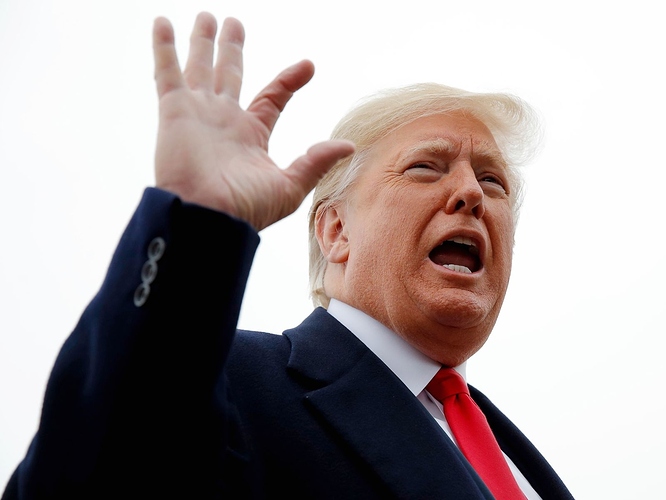 Of course, no matter how many times he may equivocate, a vast/lasting swathe of carnage is a done deal.

Shopping at a number of internet vendors yesterday, it seemed (although I do not have an ongoing “feel” for the marketplace by any means), that many were holding minimal amounts of remaining stocks. This would seem (to be likely) unusual for a couple weeks prior to “Black Friday” ?

The vast collateral damages of deranged, incompetent lunacies. Entire industries destroyed in the interest of “milking the holy MSA cow”.

So now I wonder how things proceed …

Been waiting what, 3-4 weeks for this to come to a head?