Drums of War in the Ongoing FDA Flavorings Inquisition?

Their cannon fodder may be accumulating. Amazingly (to me), “Unicorn Puke” is really and truly “a thing”:

(May, 2018): “Analytical and toxicological evaluation of flavor chemicals in electronic cigarette refill fluids”

(Having become something of a NET devotee), I have “no dog” in these synthetic flavor fights. These are long and complicated reports. While it may (possibly) be that these studies are in some (or many) respects flawed in terms of methods and conclusions that are clearly descriptive of, and thus relevant to, real world conditions, the fact that few persons in the populace will likely actually read these reports, and even fewer persons are in positions to (technically) question and challenge the nature and veracity of their publicized “findings” and “conclusions”, means that this situation represents distinct, imminent socio-political dangers.

The extraordinary ease with which the CDC (and now the FDA) have managed to quite falsely - and with what is in multiple respects pathetically flawed and unreliable so-called (garbage) data - convince an ever breathless/brainless “press”, politicians, policy makers, and a large majority of the public that (prescription pharmaceutical) Opioid medications were/are highly dangerous and fatal - where by far the vast majority of dangers/fatalities have been and are demonstrably due to the emergence of illicit Fentanyl(s), which is a direct result of the growing throttling and prohibitions of prescription pharmaceuticals. Their alleged “cure” has in fact engendered, exploded, and sustains this “mortality crisis” itself ! Genocidal idiotic lunacy. The “Iron law of prohibition” (predictably) at work, vastly more people have been and are being harmed by the actions of ham-fisted moral zealots. With blood on their hands, they just keep fallaciously “doubling down”.

Never over-estimate the intelligence of pandering politicians, glory seeking bureaucrats and the “press”, and the average consumer of their click-bait moralistic pseudo-scientific pablum and bite-sized rhetorical tripe. The problem with ignorance is that it feels so much like expertise. Welcome to the Age of Dunning-Kruger.

Plus, Juul is finding it harder and harder to get recognized/legitimate researchers to give them the info they need to fight the battle of ignorance. 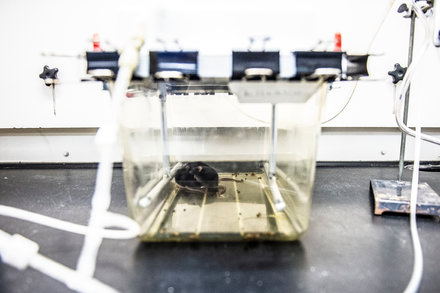 Scientists Wanted: Recruited by Juul, Many Researchers Say No

Juul needs good science to prove to the F.D.A. that its e-cigarettes offer more benefits than risks. Some researchers say they are loath to take the company’s money.

I’m with you, right up to the opioid medication scandal. Not a good analogy, IMO. According to reports about it, over here, your doctors were overprescribing like crazy, even to the point of making a nice little eraner out of it, such that the difference beween a Doctor of Medicine and a drug pusher became pretty academic, entirely a question of education and social status, nothing more. At least that’s how they tell it, over here

That’s not to say that the problem was tackled sensibly. Indeed ,the way your authorities tackled the problem was by far the bigger scandal. Creating a nation of drug addicts is one thing. But then whisking away everybody’s supply and leaving them all at the mercy of street dealers is a whole new level of idiocy.

Nicotine addiction is never, ever going to be such a big problem, not even if those nicotine salts really are just as addictive as smokes, like some say. I mean, when did you last hear of somebody commiting violent crime or selling their granny down the river because they couldn’t get their nicotine fix? I’ve never heard of that, ever. Nicotine addicts can sometimes get desperate enough to do really undignified things like hunting through ashtrays or picking dog-ends up off the street, but that’s about as far as it goes, isn’t it?

Not only is that a bad ananolgy, IMO, but you’re shooting yourself in the foot with that particular comparison, and making nicotine addiction sound worse than it is.

Thanks very much for posting this , though

Jay, thanks for your thoughts. My intention was to demonstrate the full capacity for specious and sweeping activity by these agencies (FDA, CDC, etc) - not to make (psychological and/or moral) judgments as to the good vs bad surrounding the use of various alkaloids. Suit yourself there. Demonstrable truth(s) in general, it seems, have a way of having close to, or exactly nothing, to do with “it” (regrettably, in so many things where human affairs, and the creation/administration/enfarcement of laws/rules, are involved). Inviting the State to regulate the bodies and minds of competent adults is (IMO) “dicey”. Upon such these bureaucracies flourish

(August 2, 2019): … the Food and Drug Administration announced that the agency is seeking comments on a proposal that would add 19 chemicals to the already established list of harmful ingredients found in tobacco products. The move comes just days after a Yale analysis identified chemicals called acetals in some flavors of a specific brand of e-cigarette: Juul. … One of the chemicals that the FDA is considering adding to the list is diacetyl, which gives products a butter-like flavor. …

Public comments can be submitted (a whopping 3 posted so far). Those comments can be viewed here. Speaking one’s mind (there) is arguably more meaningful than (random) “petitions” - though I would caution individuals from imagining that (even the most eloquently stated and erudite) public comments are likely to be taken very seriously by the “bio-psycho-social” thought-police. Their bureaucratic livelihood thrives on these bureaucrats appearing to “slay” socio-political metaphorical dragons (whether they be “real” or “imagined”).

Proposed Addition of 19 Toxicants to the HPHC (harmful and potentially harmful constituents) List:
Applying all the criteria discussed earlier in this document and using available information, FDA tentatively concludes that the 19 toxicants in table 1 should be added to the HPHC established list. This tentative conclusion is consistent with our definition of “harmful and potentially harmful constituent” as set forth in the Agency guidance entitled “Harmful and Potentially Harmful Constituents’ in Tobacco Products as Used in Section 904(e) of the Federal Food, Drug, and Cosmetic Act” (Revised) dated August 2016 (the HPHC Guidance) in that the Agency has reviewed data regarding constituents identified in tobacco products and their smoke, including in e-liquids and in aerosols of ENDS products that are, or potentially are, inhaled, ingested, or absorbed into the body, including as an aerosol (vapor) or any other emission. 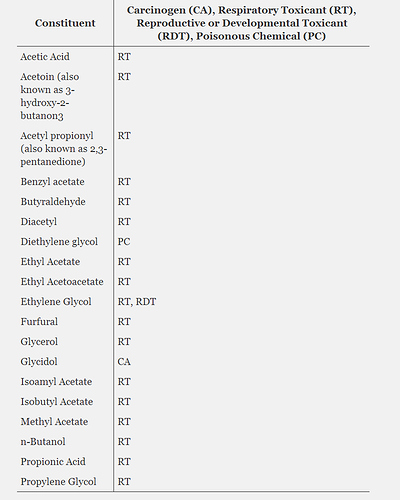 and appears intended to construct a basis by which to obviate/eliminate the ability to manufacture e-juices.

Ironically, a couple of what have been reported anyway as (perhaps) being some of the most potentially harmful flavor additives (which I recently posted about here) are entirely absent from the FDA’s current proposed “hit list” - though I suspect that the “powers that be” are nowhere near “done” storm-trooping …

Nicotine appears to simultaneously also be under attack by the Consumer Products Safety Commission.

The FDA Food Police have some more ammunition for declaring Propylene Glycol and Glycerol to be “Respiratory Toxicants” (or something such as, “immuno-suppressors”) - with no Nicotine, no flavorings.

(WIRED; September 4, 2019): “Vaping May Hamper the Lungs’ Ability to Fend off Infections”

When are they gonna ban cigarettes?

(Probably) only if and when the revenue-stream funding state coffers (from settlements, and taxes) dries up.

Check move in chess (time to look busy). FDA places the ball firmly in JUUL’s court with these requests:

“We request that you provide any and all scientific evidence and data, including consumer perception studies, if any, related to whether or not each statement and representation explicitly or implicitly conveys that JUUL products pose less risk, are less harmful, present reduced exposure, or are safer than other tobacco products,” the FDA told Juul. … Likely independent of the ongoing investigation into lung problems seemingly caused by vaping, the FDA also requested “Aerosol particle size analysis of aerosol formed from your device,” “experimental design and data on pK studies from your device, your e-liquid, and combusted cigarettes,” comparisons between free nicotine and nicotine salt delivery, and “How the design and performance of your device and/or e-liquid, including the level, formulation, and delivery specs of nicotine, affect lung deposition as related to the use and addictive potential of the product.”

and if one noticed… Juul chimed in that menthol should be included with the choice “tobaccos”…
I forgot where I read it… but menthol will be acceptable.

(March 13, 2019): FDA Commissioner Scott Gottlieb is moving up the review deadline for flavors except mint, menthol and tobacco.

(March 13, 2019): The guidance isn’t limited to e-cigarettes: the FDA also plans to make manufacturers stop selling flavored cigars - including mint and menthol - that hit the market between 2007 and 2016 while the FDA considers whether to authorize their sale. Ultimately, flavored cigars might be banned altogether - although plans for that are still in their infancy. In today’s statement, the FDA said it’s “moving forward with a proposed rule to ban all characterizing flavors in cigars.” … Gottlieb explained the agency’s rationale for keeping mint- and menthol-flavors readily available in a statement, saying, “recent evidence indicates that mint- and menthol-flavored ENDS products are preferred more by adults than minors.” He added that the agency is “aware” that adults may be using those vape flavors “with the goal of ceasing combusted tobacco use.” … But Gottlieb promised that the agency would keep a close watch on youth use of mint and menthol flavored vapes, and reconsider the plan if it needs to.

Overall, it seems that the FDA is not happy about Menthol use - and has aimed to eliminate it since 2009.

menthol will be acceptable.

Thats funny , menthol / mint by juul is one of their more popular flavors fir the younger crown

(November 15, 2018): … mint is much more popular with young people than the menthol and tobacco flavors. Menthol and tobacco are among young JUUL users’ least favorite, with only 5 percent or less of those younger than 21 selecting one of those flavors the last time they used a JUUL. 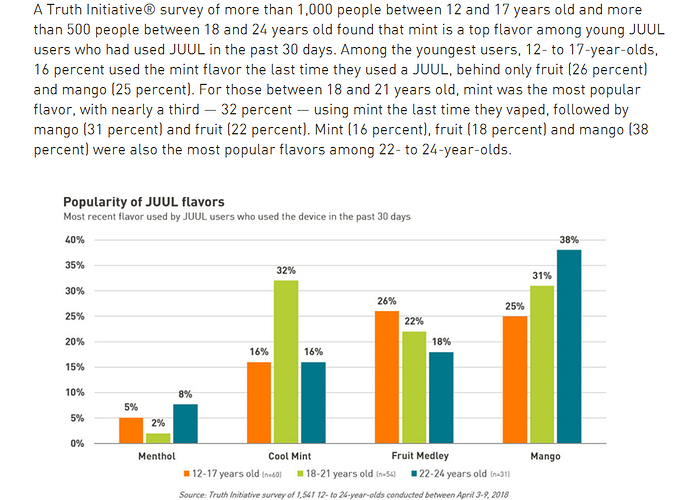 Think I saw in in regards to… Michigan…

Think I saw in in regards to… Michigan

sigh
You Americans are royally screwed, I fear And i think, it probably it follows that the rest of the world will be, too.
Intestingly , according to that NY Times report, the Scottish researchers that Juul have recuited have lost credibility by publishing research that radically differs from other, credible research re. Juul usage amongst teens,

Wel, well, could that have something to do with the fact that the normal Juul devices are not even legal in Britain?.

(umm, should point out that Scotland is in Britain, not the USA, just in case any under-educated American legislators are reading this) Juul had to produce special pods with drastically reduced nicotine content, in order to market their device in Britain. And they didn’t hit the market til September last year. And they’ll never enjoy the same sucess as the American version , because the 5% nicotine content is part of ( quite possibly the whole of) Juul’s magic formula.

So, the Scottish researchers found that only a tiny proportion of their local teens had ever used Juul. Fancy that.

But twist away, legislators. By all means continue to do what you’re good at. You may now ignore all ""biased"e-cig research coming out of Scotland

If you think that measley 5% is something, do not!! go check out Eonsmoke… as they use a nut replacement for nicotine and their average is 6% or 6.3mg…

but thank you for the info you just shared… who knows… maybe someone reading all of this will help turn the tide, remains to be seen.

6.3 mg/ml Nicotine concentration exists in the general range of 0.63% by weight (when in aqueous solution)

(BMJ, 2018): “Vaping versus JUULing: how the extraordinary growth and marketing of JUUL transformed the US retail e-cigarette market”

At one time, on their site, it was 5.3mg so who knows?? I have yet to see any 3% locally but yes can be bought online.

I suppose the good news (might) be that you’ve been vaping 1/10 of the Nicotine that you thought you were.