Enough is enough...beware of gearbest!

This is not true. I bought my first one about 1 year ago from Fast Tech, and it was only $18

This is the older version, not the new V5, so it would definitely have been less than $20

@Chrispdx FYI, also, after all this happened I reached out to ShenRay directly, and explained what had happened.

The person I spoke to, Leon, was super helpful, and was so sorry to hear what had happened that he offered to help me out.

They do not make the v4’s anymore, but he had the last 4 produced in his possession, and sold me all 4 shipped for $50. Will be here in a couple of days!

See what goodies you’ll miss out on if you stop dealing with Gearbest?

he had the last 4 produced in his possession, and sold me all 4 shipped for $50.

Wasn’t this worth all the trouble? You wanted clones, now you end up with the real thing for the price of a clone!

Wasn’t this worth all the trouble? You wanted clones, now you end up with the real thing for the price of a clone!

I guess that’s what you can call it lol. Why somebody would go to the real manufacturer after clearly purchasing a clone from china is a question I don’t want an answer on lol.

No, I didn’t contact the authentic Vapor Giant manufacturer.

I contacted ShenRay, the manufacturer of the clone I wanted. lol

I ended up getting the last 4 ShenRay clones they had for $12.50 each, shipped.

That is great!!! So ummmm you sending me one right? Lol. J/k

Awesome! We all learned something.

I ordered quite a few items from gearbest and I mostly got exactly what they advertised. The only time when I got something that was different from described was a glass for a tank which is not that big of a deal for me.

Well apparently PayPal decided the case in my favor, so looks like I was right.

I’m smelling some butthurt so what’s your point??

Anyway thanks for bumping my post which was already forgotten 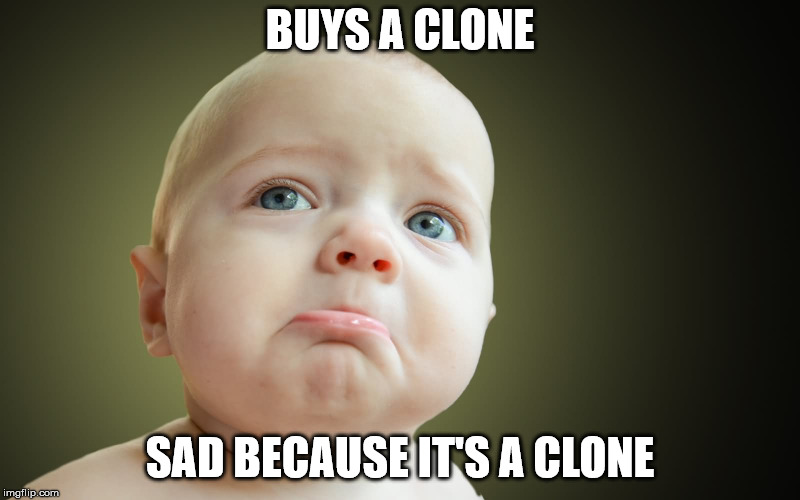 I even made a picture

again, thanks for bumping the thread!

Your attempt at trolling is only keeping this thread at the top. thanks man.

just curios, did you actually read any of the post, or just want to get your post count up?

So in YOUR opinion…doesn’t matter which version of a clone they send their customers, as long as its any clone right? I mean don’t matter that they advertise one thing and send another, because they’re clones anyway. pffft

Your so wrong it’s funny. Don’t matter. I keep winning!

You’re probably the asshole that goes to a grocery store, finds 2 bundles of bruised bananas and then complains when you open them to find soft spots. Piece of shit.

I would if I got oranges when I got home! wtf

Seriously tho, do work there? Are mad that I got back at a shady vendor? Are you mad that I posted it? Did they do the same to you and you didn’t get shit back? LMAO

Hey man, you can call me idiot all you want but I don’t buy clones and expect them to be anything other than a shitty clone

You must be new to this whole vaping scene I take it, welcome…

Na, not new at all, but you must be new to the whole buying stuff online right?

Here’s a tip for you: If a vendor advertises something & sends you something else in it’s place, you don’t have to accept it

Well I admit, my first post was pretty long, and might be too difficult for you so here goes the tl:dr version

Ordered a ShenRay Tank
Received a Steam Tribe Tank
I complained, and got my money back

Yep, we’re done here. I’m glad it worked out in the end.

12 Likes
What should we do about old threads?
← previous page