I ordered some nic and Vanilla Ice Cream (been wanting to try this as it is highly rated) from Liquid Barn during their sale. The shipment went out on 12/3 and was received here in FL (at the delivery sub-station) 12/7 (Saturday 2am) and listed as out for delivery that day. Nothing. Sunday there was a notification that it was out again for delivery, but I didn’t believe that (it being Sunday). So I expected it on Monday. Nothing again. I chatted online with a live customer service (for 25 minutes) agent yesterday afternoon who assured me it was going to be delivered by the end of the day, it wasn’t. I called late last night and got someone in “Central America” that I, for the life of me, couldn’t understand. I have managed offshore outsource customer service and collection teams in Costa Rica in the past and never would have hired anyone that couldn’t speak recognizable English, the way this person did, EVER. I had to ask her to let me speak with someone I could understand and that person assured me that it would be delivered today, and that someone in the US would call me today to confirm. I called again this morning as the “delivery exception” status is still on the package; there is no mandate on the package for a signature (even though I have been home) and nothing noting that a delivery attempt had been made. I was advised that someone would return my call with the exact status. Phone message from an unidentifiable number (I don’t answer unrecog #'s cause they are generally Microsoft or the FBI threatening arrest if I don’t give them my banking information) and the message was: Your package has been received by the regional facility and “should be” delivered today? I’m bothered by this. ****FedX

I too am having an issue with Fedex.
Waiting on a nic delivery that was supposed to be delivered Friday, never happened. No delivery yesterday, and expected today, but apparently it’s not even on the vehicle for delivery. I want to punch a fedex worker in the face right about now

Send them my way. I’ll have them for dinner.

I just had this issue with a next day delivery of Meds, not anything vape related and the delivery window was not accurate at all. I don’t know what’s going on over there.

I think Monday during the funeral service for a UPS delivery driver, everyone was supposed to turn on their hazards and pull over for respect to the fallen driver… but other than that, havent heard much on delays… at lest with the UPS…

FedEx is horrible, I hate when I order something and they send it FedEx, usually it’s with free shipping and I don’t know why any vendor would use them!

Update, not to my surprise there is no package today. I called their office at 4:50pm and they supposedly tried to call the regional truck dispatch office, but nobody answered. They don’t know where my package is now because there was no time stamp recorded since yesterday (when it was out for delivery). In other words they lied to me twice today about the status of the delivery. Tomorrow if it does not come I am going to call Liquid Barn and ask them to refund the order; I know it’s not their fault but I am otherwise helpless in this matter.

This is such BS.
So my package was NOT delivered today. Reverted back to delivery ‘pending’ for the third time. Should of had my nic on Friday. Today is 8 days in transit. Called them yesterday, and today & just like @HVPGH and was also lied to. Yesterday was told it was out for delivery, same today yet no delivery.

I don’t know what FedEx has turned into, but it seems a joke to call them a top tier shipper at this rate. WTF did happen to them ? Maybe time for a class action lawsuit ??

Hate to say it, but just sayin’.

that is just sad

For those seeking to actively avoid having vendors use FedEx as a shipping carrier, and regarding (for me entirely ignored, and not, by their own account, by any mistake, but merely to save themselves likely just a few pennies) IMR Batteries shipping carrier options (as ostensibly selected by customers during checkout):

Where I live, UPS does a great job, whereas the feckless clowns that FedEx has used for many years are thoroughly incompetent slobs who love to leave parcels downstairs (rather than delivering directly to my apartment), begging to be stolen by anybody off the street. I chose UPS when ordering. IMR sent me an email stating that they would be using UPS. Then they sent me a subsequent email today stating that they were shipping it via FedEx !?! I called their toll-free customer service telephone number immediately. The young fellow told me that such is what they do (if it saves them a few cents), as if it was nothing to do that to customers. This rather pissed me off, so I gave him a piece of my mind (regarding an over $50 US order, no less) - and (it appears just barely in time today) they canceled the FedEx shipment and have now shipped it via UPS. (If the carrier chosen matters to you), do not trust them to follow their own written assurances as to the shipping carrier.

I got my IMR order today it came UPS and I didn’t even ask. In fact all 3 of my IMR orders have come UPS. Maybe in my state UPS is cheaper for them. IDK

Now my River’s Order is coming FedEx and on Friday the 13th, That scares me. 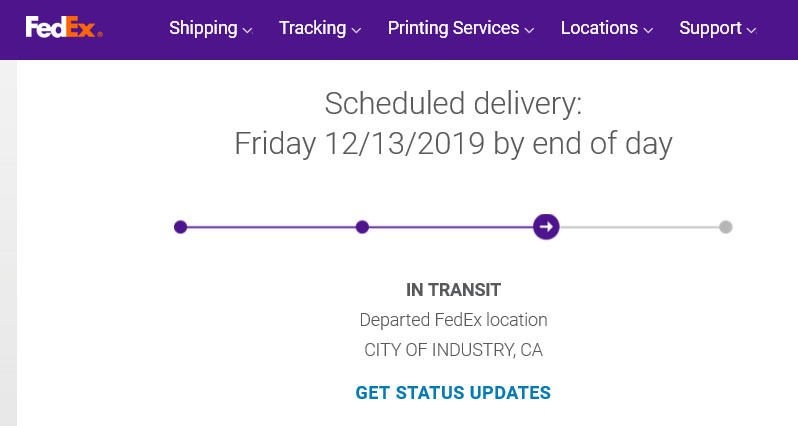 Their checkout web-page had a selection of UPS or FedEx (priced within a few nickels of each other). Perhaps (during their recent BF battery sale), they got a bit “chintzy about the chariots” ? They thought nothing of changing plans without even asking, after emailing that it was via UPS (after I had paid more for UPS), merely to “pocket some of my change”. Further, they seemed surprised that I would be pissed-off !

On Thursday, the Moon will be full in the Twelfth Month on the Twelfth Day at precisely 12:12 AM, EST. Better hope those feckless dweebs who work delivery for FedEX survive the night before your delivery.

On Thursday, the Moon will be full on the Twelfth Month on the Twelfth Day at precisely 12:12 AM, EST. Better hope those feckless dweebs who work delivery for FedEX survive the night before your delivery.

LOL full moon crazyness that is really a thing!.

I think I remember the price was the same for both so I didn’t have to choose I left it default.

I know what your going through. I hate it but…when I put out a certian energy like I really want something “my way”… it doesn;t happen happen. It’s when I don’t care that things seem to go smooth. Really weird or just a psychological projection/coincidence or full moon madness.

But yea I ordered from a black friday sale. and Im really getting it on a REAL Black Friday. how about that!

Who cares if they survive I just hope my package survives.

LOL full moon crazyness that is really a thing!.

Several studies refute such things - yet many folks (including those who work with the public) do seem to get psyched about it. Statistics has a way of annihilating anecdotally recounted experiences. If it is important in the minds of one or more sentient beings, then rhetorical doors are opened to (any) thing holding perceived significance. The thought-picture need not exist outside of the realms of mind that we invariably associate with some referenced sense of experiential “concreteness”. A “looking glass darkly” (or something like that).

If some particular metaphor(s) holds some importance with sentient beings inter-relating, strictly objective verification of some common experience is not necessarily required to imbue relational significance.

The two previous Friday, December 13ths in this millennium have not been nearly as close to full Moon.

Everything possible to be believed is an image of truth.

He’s a Blockhead who wants a proof of what he can’t perceive,
and he’s a Fool who tries to make such a Blockhead believe.

Whatever you do, my friend, do Not think about Blue Cows:

Whatever you do, my friend, do Not think about Blue Cows

Nah… I only think of Pink Elephants.

Nah… I only think of Pink Elephants.

It’s when I don’t care that things seem to go smooth.

You do know that they are actually Albino Elephants who bathed too long in the Grenadine syrup, right ?

(Perhaps) upping the Boron concentration in the Maraschino Cherries might make everything copasetic ?

Or, branch out into “social media” commiseration ?

FedEx Sucks. 148 vind-ik-leuks. This page is for EVERYONE who got screwed by FedEx in one way or another...I know there are a lot of people out there.

… or this group (the name of which rather says it all): 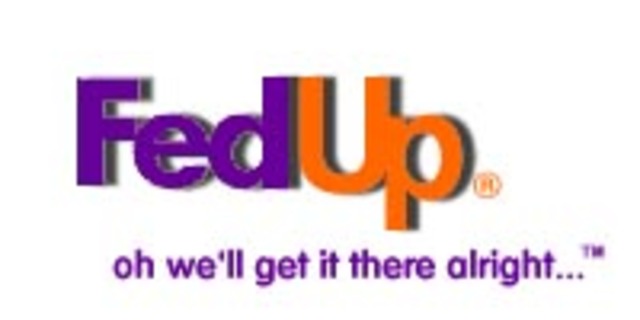 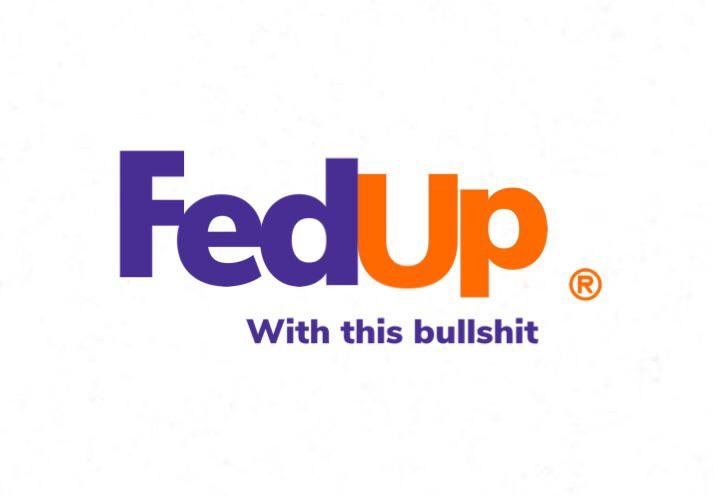 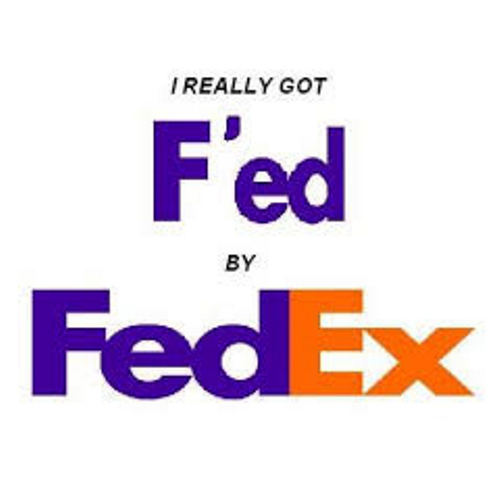 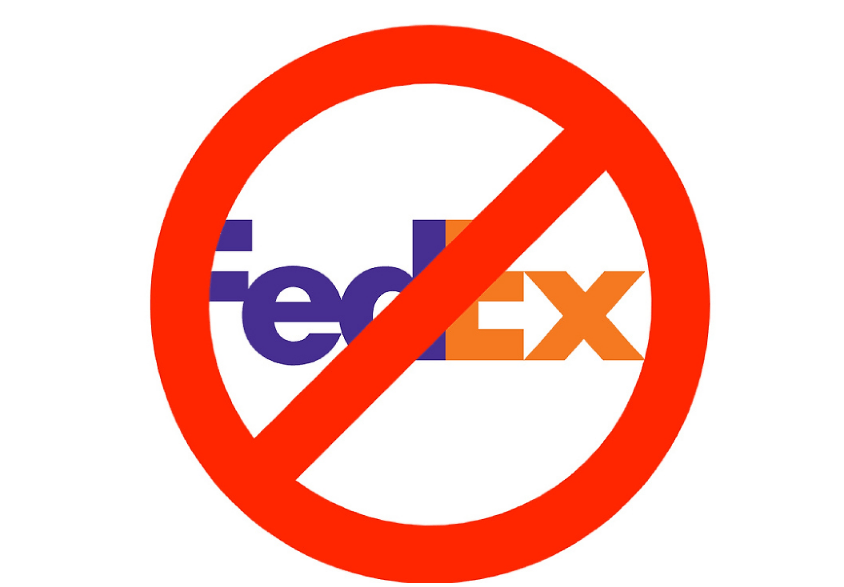 If FEDEX is to pay out anything….they will only pay the insured amount, that you’ve stated on your FEDEX shipping bill. And they get to keep the case and its contents that you shipped. But wait…it gets better…You have to prove that value of everything that was in your shipment. That’s right….you need to show proof of purchase and the receipt for EVERYTHING that’s in your case that you’ve shipped. They make it very difficult to get your money. And it’s a lengthy process that can take several months.

However, On Trac is the all-time, world-class worst ! Amazon (used to) use them all too often around here. Their drivers are paid by-delivery (as opposed to a humane hourly-rate). They have virtually never securely delivered parcels to our building (dumping them on public 1st Floor). Happened again today to a neighbor. 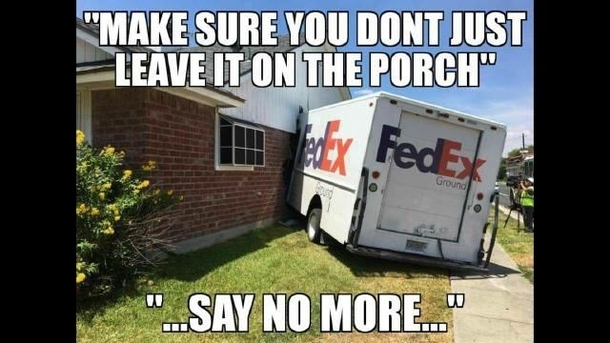 Seriously??? My FX delivery guy is the best…!!!