Looking for some advise on this one, how do my % look? I have tried numerous cinnamon roll recipes, from other mixers and my own inventions, and none have hit the mark. FW cinnamon roll is the closest single flavor I have, so I’m trying to build off that, the flavor revolution cinnamon roll is very strong, and it has a good strong bready note, like the outer ring of a cinnamon roll, the biscuit is to help that note. The sugar cookie is to help the FW stay more like the gooey center, and the joy is to bring the yeast note that is present in a real cinnamon roll. I’m gonna mix this up in a day or two whenever I have time, the plan is to get the base notes right and then add in cream cheese icing to top it off, and some flavorah rich cinnamon if the cinnamon needs a boost.

I’m close to being able to mix that up, but of course, missing the FR…

Well I mixed it up last night, I’ll give it a day or two then test it out.

A Caramel Corn profile. It’s not bad but it’s missing “something”, but I can’t figure out what. It’s a little sweet, a little buttery and caramelly, a little popcorny… checks a lot of boxes but it reminds me of a Hollywood western tavern set. Look at it from the street and it looks great, but go around back and you realize it’s just a front.

I tried and tried forever to get something close to Steep Pop Deez and finally got there … Check out my Pop dis not deez recipe the butter rum , peanut butter and FLV popcorn finally set it off…

peanut butter and FLV popcorn finally set it off…

That MF Caramel is a good flavor, but I don’t know if it’s best used here. I think perhaps trying without it. If you feel it’s missing a caramel note I might try Holy Holy Ry4 or FLV Caramel.

Hey, I’ll take spitballin’, especially from you. I don’t have Saline or FLV Caramel, but I do have TPA Caramel (Original). I appreciate the input, saliva included.

So water at a low % is OK? Never thought of adding water to a juice. Learn something new every day.

use very little to take dryness out of some flavors, works nicely. Some add DW to tanks in cold weather where high vg wont wick right.

Probably no help but I always throw a tiny bit of butterscotch in my caramel mixes, seems to lift them up a bit, or honey if I plan on a more bakery oriented recipe that needs some good caramel.

Maybe worth a try if nothing else works.

Oh, if I could also ask… Why DW as opposed to spring or tap?

Cleaner i would assume and most choose not to drink their tap let alone vape it, so many chemicals and sure vaping that shit be toxic

I use these when I mix with NS… 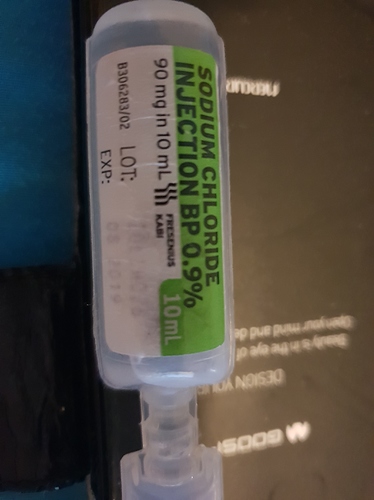 And on the occasion that I have used it in a recipe with caramel, I found it really emphasised the caramel for some reason. Sometimes more than I wanted.

By now I get mine from Amazon since its sterile but since you wanted to know how to do it diy, I’ll link a video that pretty much shows it and explains it. Still viable even so it’s older. Hope it helps.

Nice link and viewed before but not sure what i do overly right? ingredients in a bottle, shake it well and your done. Boiling the mess evaporates off all your goodies!

Nothing wrong with either method. in my case, I was using these big Salt crystals and they wouldn’t stay dissolved just by shaking, so I boiled the dw prior. Also I was paranoid about bacteria etc, boiling was a great idea to that time and I still think it is.

Beetlejuice, Beetlejuice, Beetlejuice. A friend at work asked if I would whip a juice for his wife, not an uncommon occurrence. I know she likes fruits, pineapple and mango are favorites. She likes in your face flavor, and she likes em sweet.Well yesterday he asked if I had anything for her yet and I told him I didn’t have a chance yet. He said no worries I’ll just pick her up a small bottle of Beetlejuice on my way home. Well to day I took her some of my “Fashionably Late” (please rate it at… wherever you go to do things like that, lol) Anyway, had Beetlejuice on my mind. Now I’m not one for clones, but I’ll mess with one until I’ve got it thoroughly pissed off. I thought I would jazz it up with lemon and lime. In the spirit of the origional I kept flavor percentage high. But, untill I start to tweek it i put equal amounts of the main flavors. 3% sweet mango, golden pineapple and raspberry (all Capella) and 3% strawberry and strawberry ripe (both TFA) my personal addition was lemon sicily FA 1% and lime tahity FA 0.25%. I let it steep for 5 minutes (cleaned out and rewicked rda) slight bitterness and an un common sour profile. What do you think, anyboddy want to play?