Just found this while poking around on BCV… 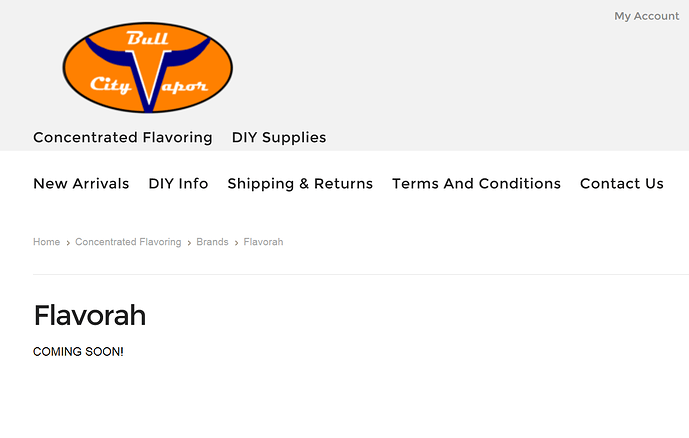 Yup, the last time I spoke with Drew at BCV via email, I told him it would behoove him to start carrying Flavorah since it was catching on fairly quickly in the DIY community.

It’s doubtful, at the moment, BCV will carry Medicine Flower since there’s the issue of the maddening crowd with pitch forks and torches storming out of the village square to get justice!

I just hope their starting variety is a bit wider.

Probably a blessing in disguise; my credit card is still smoking from Decembers activity. I keep making excuses to keep me from making another order

They don’t have FLV Custard…
They’re out of stock on Milk & Honey…
It’s West coast shipping…
It’s ECX and every time I go there, a 3-5 flavor purchase turns into a $150 cart…“might as well get another bottle of NIC for the zombie apocalypse…just incase…”

If BCV has custard or milk & honey, my will power is gonna crumble. My poor little credit card is gonna have to take another one for the team…

I hear ya. I just did the unthinkable in my book. I ordered a single flavor from Nicotine River… FLV Vanilla Custard.

Dude, you’re gonna have to let me know what you think of FLV Vanilla Custard. I seen really great reviews for it everywhere I go. This is the top flavor I want right now but trying to wait for it to come to a supplier I’m familiar with.

I’m currently steeping all the different custards I have in a solo, head-to-head trial to test for flavor, strength and body/texture. I wanted FLV in the trial but didn’t have it. In the comparison; I have:

Go to their site and send Drew an email stating your wishes! He’s the kinda guy that likes hearing from his customer base. If there are certain flavor which you think are must haves in a stash, let Drew know!

FLV Vanilla Custard is pretty damned amazing. I don’t think anyone here will disagree. I love Capella’s V1. V2 is shit in my opinion, but I can vape it. Just not fond of that butyric acid. FA’s is one I haven’t used enough yet to form an opinion, but the recipes I have used it in are good. Just not steeped to blissfulness yet.

I’m gonna feel like I’m sounding a bit forward asking them to inventory something I haven’t even tried yet but… what-the-hell right…? It’s not like they’re mind readers…or are they…

Ever since ECX started carrying FLV, I’ve been wishing BCV had it and now they do…coincidence…? I think not, excuse me for a moment, gotta go get some tin foil and make a hat…

Nicotine River carries it in larger sizes. My suggestion, buy a 60ml bottle. I went through my 15ml in 2 weeks.

I love Capella’s V1. V2 is shit in my opinion

This is exactly what motivated my experiment. I have been getting issues with both v1 & v2. I know it’s gonna seem like blasphemy to a lot of people but my taste buds are just not getting these flavors. CAP v1 always tastes off to me… like burnt tires or something, vapable but funky; v2 is plain unbearable no matter what I mix it with.

FA custard, on the other hand, mixes with everything. I’ve never gotten a lemon undertone from it like most people report. It blends easy and adds a very smooth body to a lot of my blends. I’ve also pushed it to 4% in a custard mix and got a really nice eggy flavor from it. Since then I’ve been trying to make an eggnog with it cause all 3 eggnog flavors I’ve tried so far were absolutely rancid.

CAP V1 takes a couple months to really shine from what I have found. Anything I have tested before that and it hasn’t impressed me much. But after a couple months, it is really good. I thought as you did. Just give it time. As for V2, I have recipes I used it in that I made on October 4th. It isn’t as rich, or as smooth. Plus it has that weird vomit flavor that I don’t care for. I don’t care if they stop making V1… I won’t be buying any more V2.

Aight, gonna try that. All the samples in my trial are 20ml batches. They are currently at 1month, 1day in cure. I have not touched them at all since mixing them. Planning to sample them in this next week or 2 but if they’re funky I’ll let’em sit another month before tossing and forming my final thoughts.

I have a recipe with FLV Vanilla Custard I plan to let go a couple months. It is a 50ml bottle of my Banerry Custard Goo. It has been hard not to crack that bottle open because I went through 150ml of it in no time. I can’t even think where it might have gone. If it gets any better I will be requesting a bottle of it on my death bed. I think I want to try that recipe and combine Cap and FLV Vanilla custard.

I had to place an order at Bull City and noticed the Flavorah coming soon.

Haha! I feel your pain man… Remember that Key Lime pie idea we were joking around with on the Simple vs Complex thread…? Well, I decided to give 'er a go and it’s been curing for 2 weeks. I wanted to let it sit for a month but just took it out to sample a couple hours ago and now it’s all gone

I have zero self-control around Key Lime pie. It was damn good but gonna make some minor tweaks then test new batch in a couple weeks. This may end up being my 1st public recipe and it all started just messing around with the idea on a thread here. This one is almost perfect on the first shot.

Nice. I wanna make it as soon as you get it dialed in.

That is a very kind and generous offer @Mourning_Glory but don’t fret for me, I’ll have some soon

thank you for the offer though

much love for my ELR family, lotta ‘good folk’ around here

Bull city said they will have them Thursday!