Received on 4/9/2016
Dual coil Dual post Comes already wicked [and a spare deck ready to go] and all the other goodies Kanger always throws in the starter kits, including a spare squonker bottle.
Coils measure 0.22ohms 4 wraps 3mm diameter 24ga [Kanthal A1 ?]
Smooth easy draw-Has some spitting so far-Large clouds but not mega-Good flavor-Easy to use as a dripper or squonker.
Easy setup, but battery door is a little different. I suggest you keep the [top] AFC vents turned to the sides [perpendicular to the fire button-fire button at 6o’clock, vents at 3o’clock and 9o’clock…I did get a hot spit on my lower lip before I turned it]. It’s small and lightweight, even fits well in my large hands. Only one tip choice as it is all one top cap…the tip and the AFC control. 60W only, no adjustment, but works fine. Spitting has calmed down.
Weird ‘caution’ on box…[Do not vape this DRIPBOX more frequently].
Nice to take out shopping or to eat…fits well in a shirt pocket, and holds 7ml of juice in squeeze bottle, so if you also bring extra juice…
@authormichellehughes @Joy 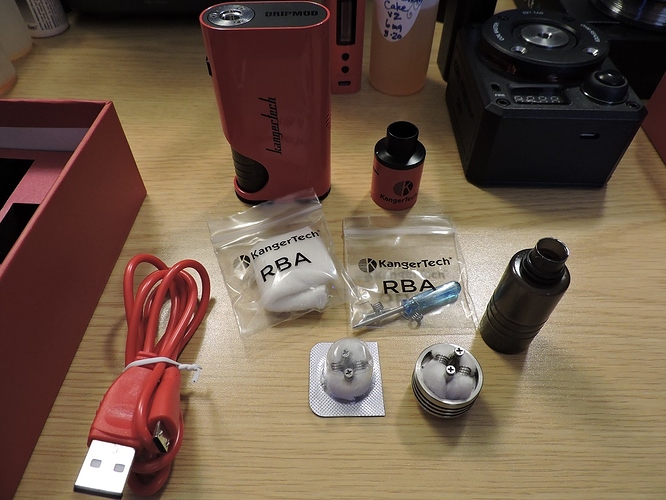 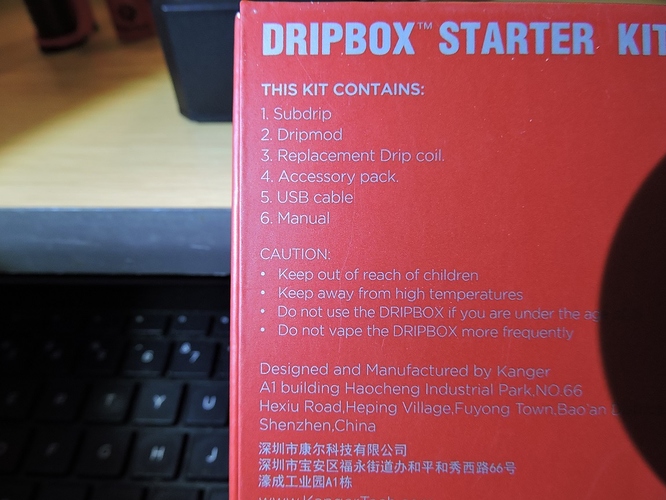 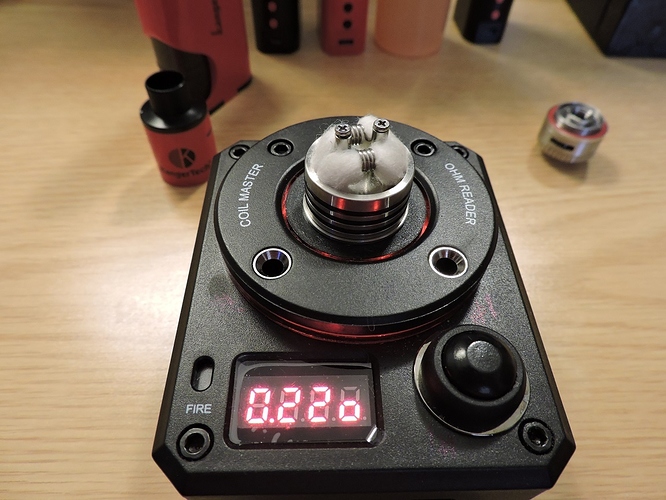 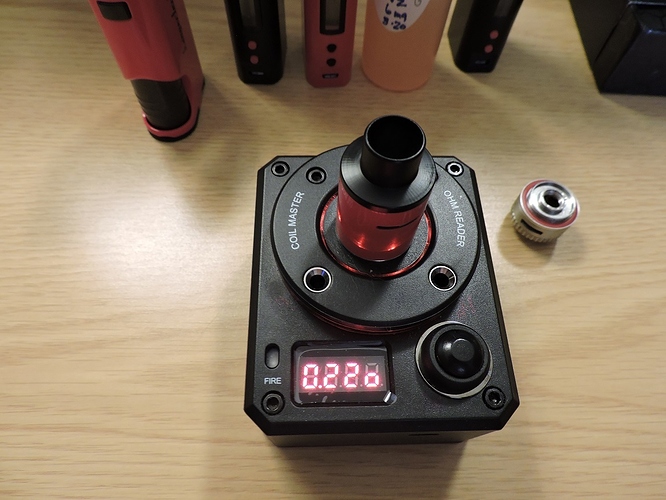 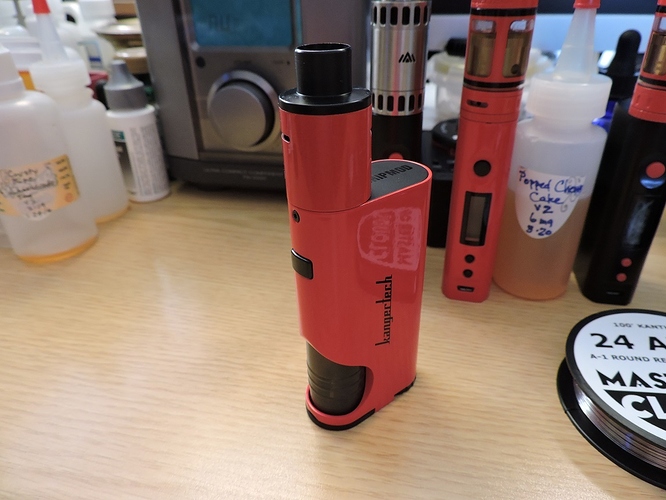 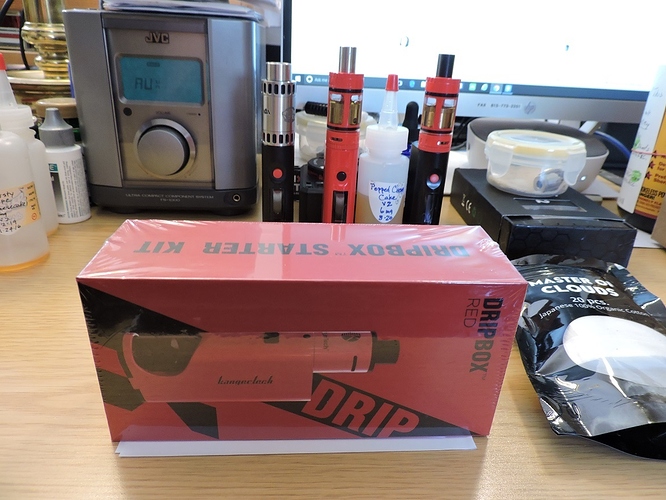 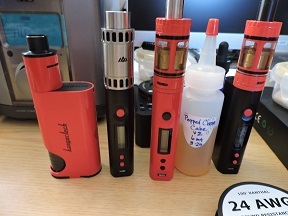 That looks so cool but I don’t think I could deal with the building part of it.

Weird ‘caution’ on box…[Do not vape this DRIPBOX more frequently].

Thank you so much… STILL waiting on mine to arrive but I’m sure I’ll have questions. Hmm that big old drip tip will definitely take some getting used too considering I only using the thin cigar tip on anything.

Waiting for mine to arrive. Thank you for the tip on the vents @authormichellehughes
I can’t seem to get a good shot for comparison, but here: 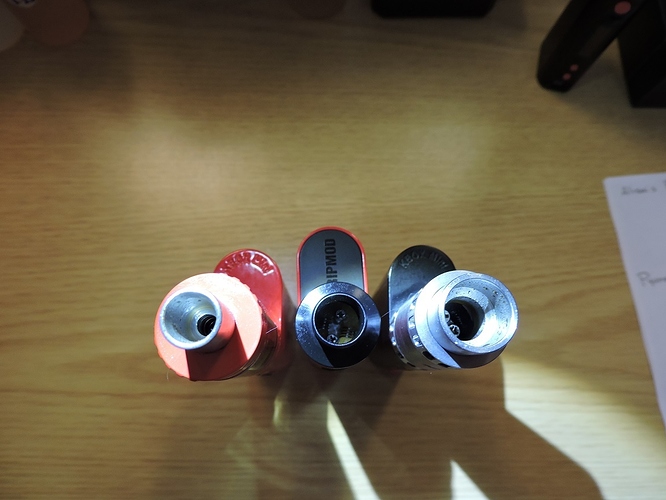 I Highly recommend the Chalice lll for a M to L . I got the clone to try it and it works great

I’d never get a Kanger box. Why? I have no idea. I have been shopping around for 521 tabs. Going to get one soon. Till then, I use my old 150 watt Sigelei mod to test coils.
Hope you are liking that sqeeze box. Dripper are where it’s at for flavor! Got an Ice Cubed dripper and still haven’t built it. Need to sit and build some coils.

Ordered one this afternoon. Right after I ordered I saw this on reddit:
https://www.reddit.com/r/electronic_cigarette/comments/4e7zn4/my_kangertech_dripbox_caught_fire_while_i_was/

Damn. Will definitely keep an eye on it when mine comes in. The video is nuts.

Bwahahahaha…love it immensely !
Gotta love some folks that review, and all aren’t on meth like our homeboy Rip…
When I research [usually 8hrs/day], I always read the reviews, all of them.
Some are very helpful, some are completely off the charts, idiotically.

[quote= my new KangerTech DripBox was on fire… seriously on fucking FIRE!! ]
and he kept picking it up. Gotta be another side to the story.
I love reviews like [all day long] Hi, I don’t have one, never used one, but it doesn’t work. One star
because I like the color. Do not recommend.

I just stay with a couple of the companies I trust and unfortunately, Kanger isn’t one of them for me anymore…it’s too bad they have come out with some really cool toys latetly!

If it were me, I would cancel the order or refuse it when it comes in the mail. I don’t think you’d be missing out on anything.
There’s a couple of other mods that I’ve been looking at that would be much better. If I needed a new mod, I’d be ordering 3 today. So, I’m only ordering one. I’m getting a Nugget for only $25. I’ll put it in the Good Deals thread.
I wonder if the one that caught fire had titanium wire in it. That would be interesting since titanium is 'very flammable". I had an IPV melt on me. All of a sudden I smelled burnt plastic and it was very hot. It wasn’t the coil or the tank… It was some wiring inside the mod that burnt. Then, I tried to get it repaired and that was impossible. I contacted Osmodus online and they had posted that they no longer repair IPV mods. Somehow I got an email address to someone in China who did the repairs. I emailed him and never heard back. So… Who repairs IPVs now? Hmmm. I don’t know. It’s sitting in a pile with an SMY 60 watt I bought that lasted only 2 weeks. The screen went black on it. I never contacted VapeNW and now it’s probably too late for warranty. I know one thing… Even if someone fixed the IPV, they would have to somehow get rid of the smell or I could never use it.

I like to watch reviews too. I hate how the pc can steal your entire day though. I love how Mike’s Vapes says “Hello Peeps”. I also like Rip Trippers and all his energy and his expressions.

How has she been holding up @ozo?

All I have done is used her…even as a dripper, and even gotten lazy and just drip thru the cap/tip…save my squonk bottle liquid for when I watch movies on the couch, then take her to bed.
Battery life seems good. I plug her in when I go to bed, unplug her a couple hours later when I get up to pee[old fart disease] and she is good all day. A little noisy with cracklin’ at times, but no spitting that reaches me…still great flavor and clouds.
edit: nice throat hit with the short cover. Absolutely no leaking.

@MisterSinner Just for reference, I am using one of my cheesecakes, but still at 6mg nic, and it’s sweet, and has the lip/tongue sugar aftertaste.

glad to hear. Still waiting on mine to come in…I think I could have built my own by now.

Just for reference, I am using one of my cheesecakes, but still at 6mg nic, and it’s sweet, and has the lip/tongue sugar aftertaste.