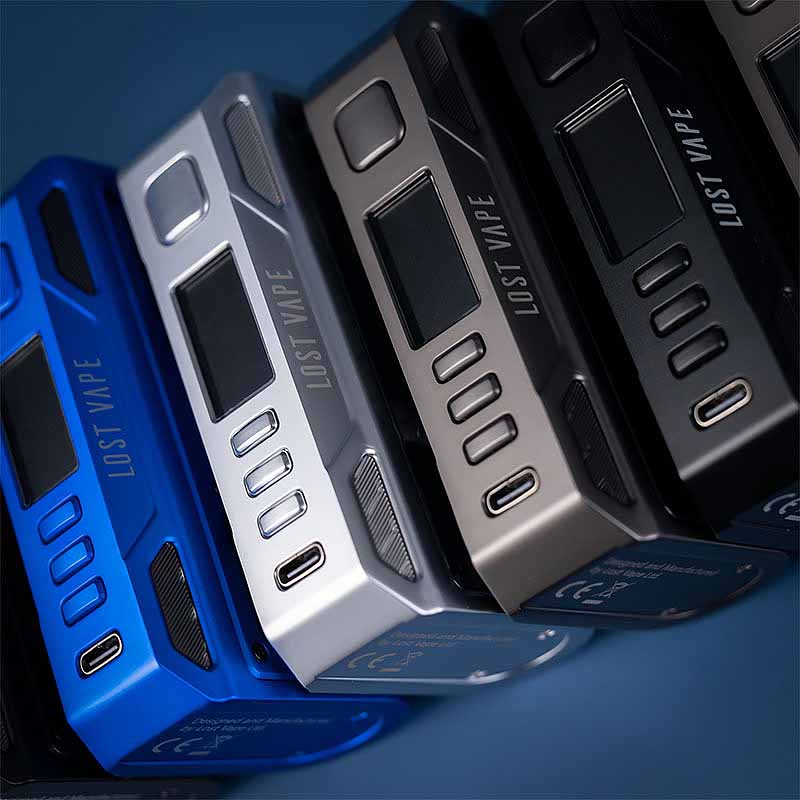 Having owned numerous Lost Vapes DNA mods over the years, and always been impressed with them, when I finally broke them (after heavy use, drops, etc.), I always questioned, “Should I buy another one, with as much as they cost” ? Well I did, hehe, but the thought was always there.

From Lost Vape on the Quest 2.0 Chipset… 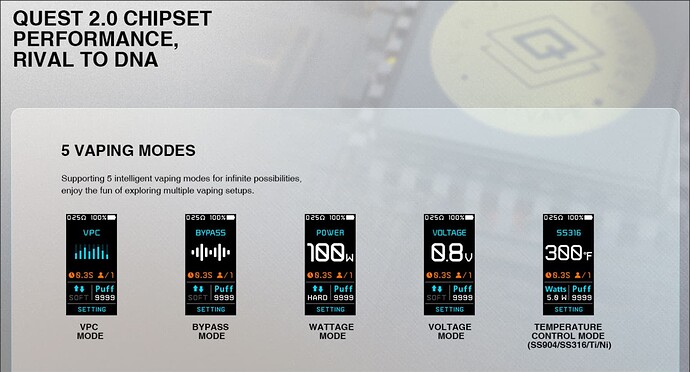 Looking pretty good so far, so let’s get into it. 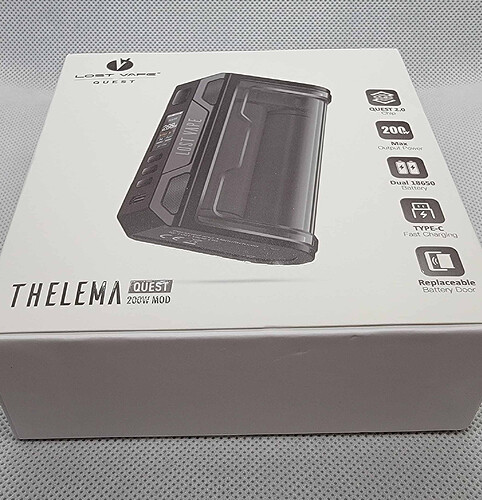 The mod was nicely protected in a foam bag, along with USB-C cable, user’s guide, warranty card, and stickers. 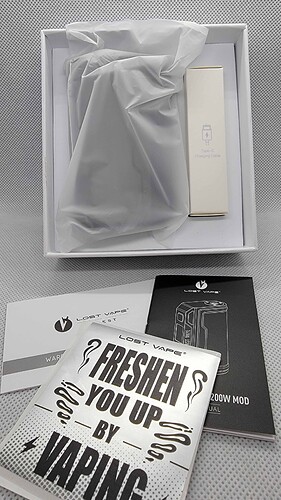 I chose the Black with Clear and I was glad I did. It was a looker. 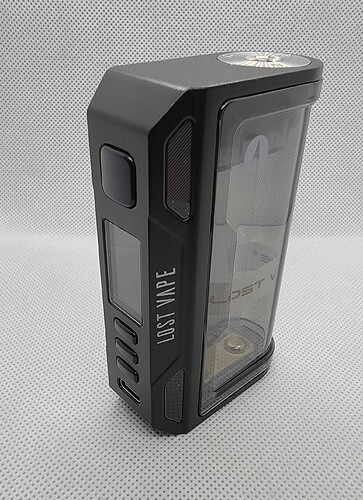 Taking a closer look at the battery lid. 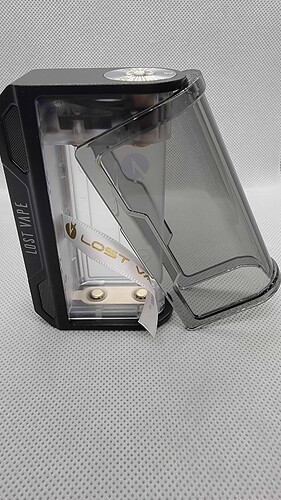 The lid itself was FAR sturdier and much stronger than I had expected, and I liked how Lost Vape left the lid clear, but the battery sled opaque for some contrast. 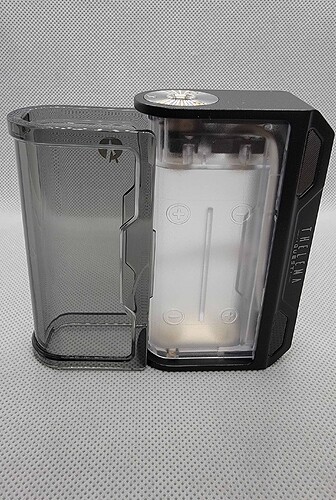 Not only was the lid much stronger than expected, but the magnets were also very strong. 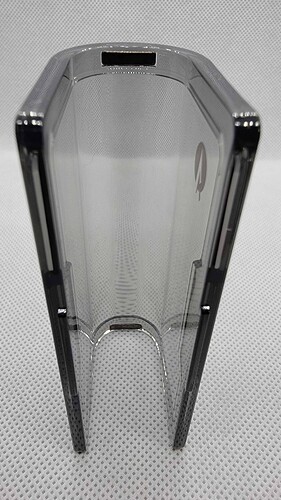 The battery sled was marked with polarities, and a nice pull ribbon. 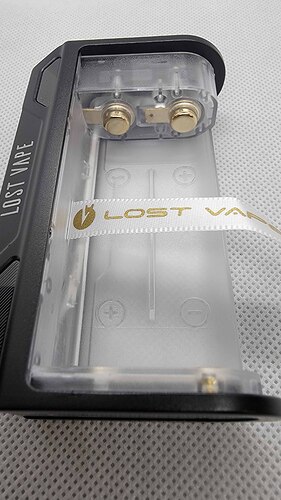 The battery posts were VERY well designed, and felt very snug when the batts were installed. I loved that you could see the tech through the opaque sled. 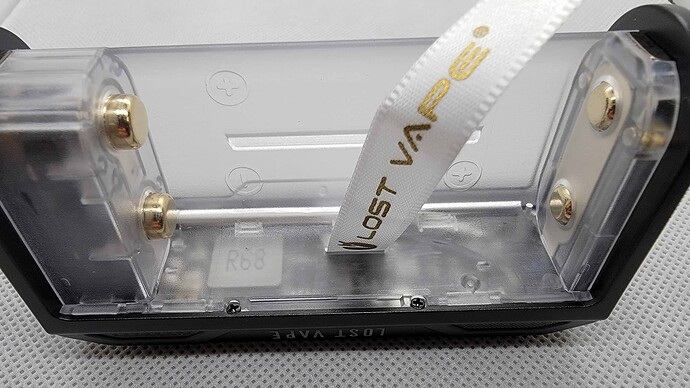 Everything closed up snug as a bug, with no rattles. 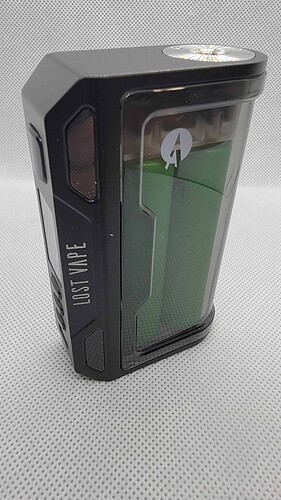 Moving onto the front, the typical 3 button (up, select, down) worked flawlessly, and were nice and clicky, with solid operation. 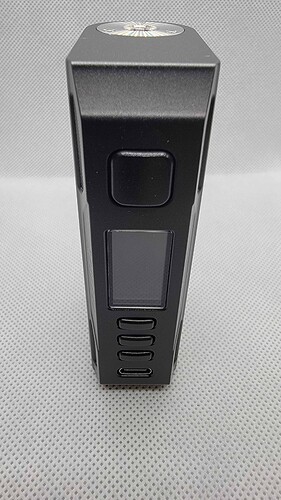 The 0.96" Color TFT display was easy to read, and with tons of info including dual batt gauges, wattage (in power mode), coil res., Fire mode, user number, and puff counter. 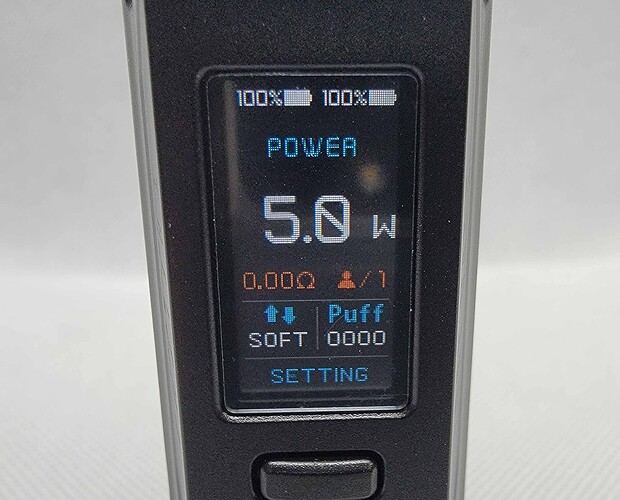 The power adjustments did take some time to scroll through without much ramp up, and it was not round robin. 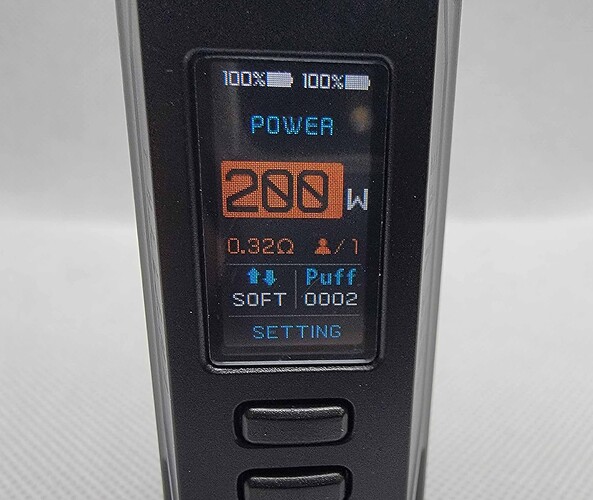 Navigation was intuitive and easy, and it had 7 adjustable screen colors. 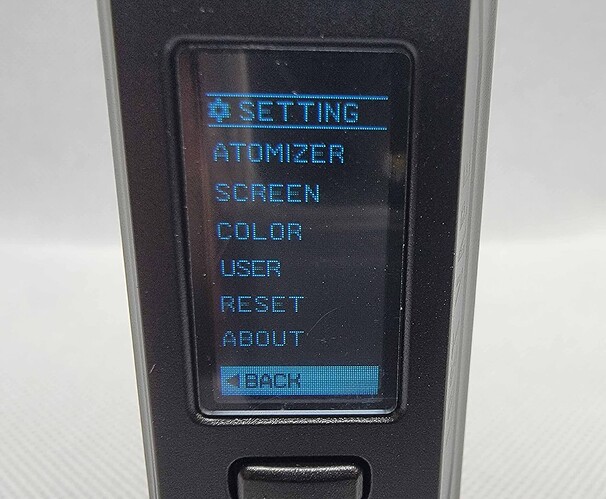 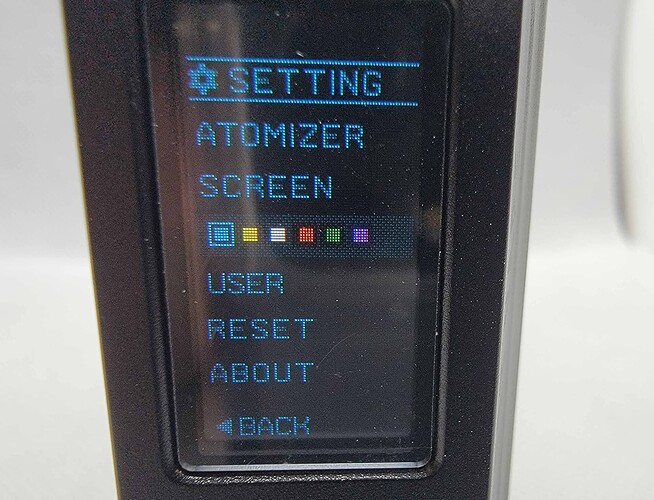 For my style I kept it in Power Mode around 65w., in Hard Power Mode.

VPC mode:
VPC mode is a custom curve output mode. The output power value can be changed every 0.5 seconds within 4 seconds from 5 to 200W.

Bypass:
It allows you to vape automatically, the power decreases as the battery drops, with the Bypass function activated it is not possible to use the “Boost” function.

I tried out all modes with the exception of TC, and they worked as expected. My personal preference was in Power Mode, with Hard Firing. Overall the fit and finish actually surprised me as I had expected at least a few cut backs. The mod felt great in the hand, and just like every other Lost Vape dual batt mod, and I couldn’t get anything to shake or rattle. The Black and Clear really looked good, and being able to see a lot of the tech on the inside was a bonus. Obviously having a clear cover showcases your batteries, so keep that in mind if you have ugly batts !!! The display was one of the first, in a long while, that I didn’t have to crank all the way up upon first use to be able to see clearly, and I left it at the stock 70% brightness. After really diving into the settings, I didn’t feel like anything was missing, and navigation was simple and uncomplicated. The MFG claimed firing down to 0.001s and it did feel pretty quick.

Clocking in at less than half the price of a comparable Lost Vapes DNA mod, and a Quest 2.0 chipset, I had expected to be left wanting in a few areas with this mod, but I wasn’t. Loved the look of the black and clear, and the bright display, ease of use, and quick firing really impressed. Solidly built, felt good in the hand, easy to use, and simple operation kept the enjoyment level high throughout the test. I was actually pretty impressed, and with the savings, you could almost get two or three of these, for the price of one other. With all of the options included, colors, functionality, it was hard to find fault with it, especially at this price point. A pretty solid mod, with a lot of options, that might just surprise you.

As I was finishing this write up, I discovered you could interchange battery covers from DNA Thelemas which was just one more bonus. 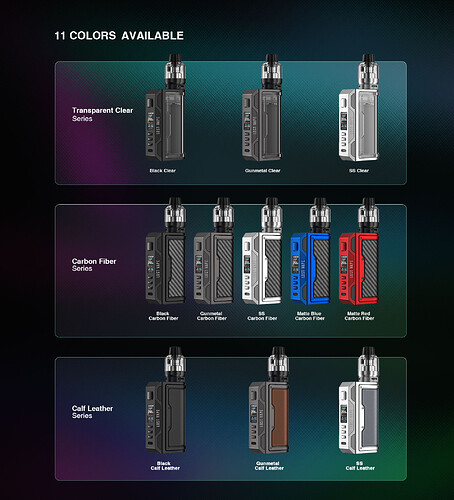 Thanks for taking the time to check out this review. 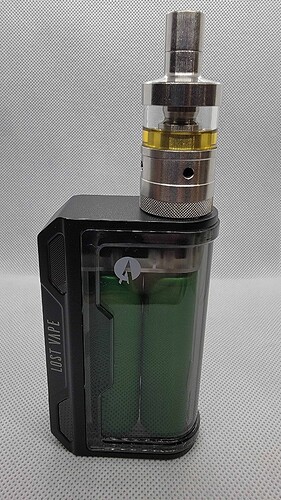 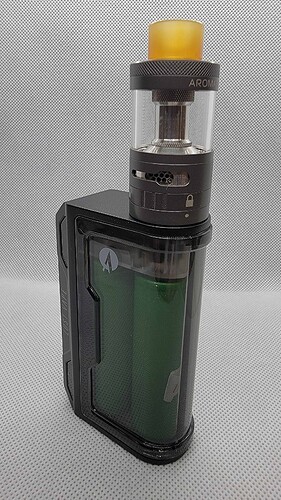 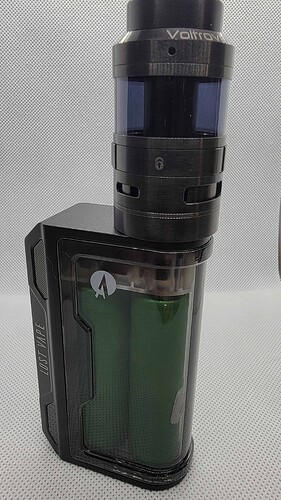 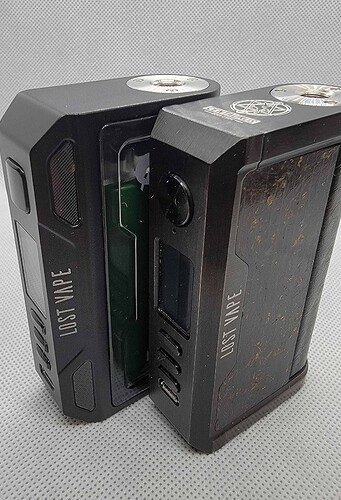 and for the price, looks really good

Excellent review @SessionDrummer. I don’t use dual battery mods but I have an Ursa which uses the same chip and find it really good to work with in all modes including TC.

Is the TC as good as a DNA chip, no, but it is functional and works well for what it is. Shame they didn’t put a TCR mode in, but it is a budget chip so I guess that is a factor.

Nice looking mod though and sounds like the chip will work well for you too.

Nice! I see a lot of ppl like these. So I have the Pro tank from the new Grus kit, and I love my LV dna Thelema’s. When I realized this, I did not run out to buy this. I like the looks of the clear mod though!

Thanks @Ianc13, and thank you for your feedback on the Quest chip, and TC as well.

I don’t think I have ever owned a Lost Vape product, nicely done sir.

I don’t think I have ever owned a Lost Vape product,

Good review brother. I like that they included a VPC option, similar to other mods I own with that curve ramping. Shame they don’t include a TCR option for us temp users though. Although not exclusive to Lost Vape (but I do own 3), the DNA chip with “Replay” mode had me sold many times over. If that VPC option were ever added to the DNA that would be close to an ultimate chipset.

They are being advertised on sale at Ejuice Connect for $40. Has anyone ever shopped there? Thanks for the excellent review! I just put one of the Grus mods into service today as one of my daily bang around Smoks went haywire after a couple years. I like the Grus but it doesn’t read out voltage in power mode, or wattage in voltage mode (no big deal), also seems like the battery life on 21700’s is not on par with my Pulse V2, they drain faster on the Grus. ***Save an extra $10.00 on that price with the code NEW25…taking it to $29.99+shipping - waiting to see if anyone has experiences with Ejuice ??? -Thanks

Thanks @TorturedZen. Yeah, TCR and Replay would SURE be nice.

Whew @fidalgo_vapes I was starting to think I was the ODDBALL here.

I mean, I’ve SEEN the whole clear, transparent, semi-transparent mods before, we all have. And most, I just didn’t care for. I saw the pre-release pics of this one and thought, “Yeah, yeah, it’ll change before they release it”. Well, they DIDN’T !!!

You’re more than welcome Fiddy, thanks for posting up.

DUDE, brothers by another mother. I thought the EXACT SAME THING.

Nice review SD. I’ve been puting off on buying this because I was so disappointed with the Grus, that I didn’t want to take a chance with this one. The battery life and underwattage issues on the Grus drove me crazy (until I updated them with a 75C DNA board). Have you experienced any under-powering issues with the Thelema?

Have you experienced any under-powering issues with the Thelema?

Thanks @Lostmarbles. I didn’t experience any, and at my typical 65w @ 0.3ohms, with the “hard” setting, it hit pretty hard, and felt right. As far as battery life, it seemed about average, maybe a tick better, so I didn’t detect any fast draining. I’ll take a closer look, now that you’ve mentioned it.

It’s a different chip from the first Grus versions so doesn’t have the same problems with being underpowered.

In my first Grus I had major problems with the ohms being read over 10% lower than actual resistance, under powered and also battery life. My second one however is spot on so I feel it was a random QA issue. When I contacted Lost Vape they insisted that 10% difference was within their tolerance and didn’t want to know about it.

I have an Ursa mod that uses the Quest 2 chip and have no issues with it’s power. It does however read the battery level lower than actual by around 12%.

It’s a different chip from the first Grus versions so doesn’t have the same problems with being underpowered.