Thank you for all your time and work. Great reviews!!! Do you think the Butter My Biscuit would be a good sub for CAP Golden butter, or is the biscuit too prominent and would only work in a cake or cookie type recipe?

Thank you so much!!!

Thank you for all your time and work. Great reviews!!!

Thank you very much @MysticRose, that means a lot coming from you.

Do you think the Butter My Biscuit would be a good sub for CAP Golden butter, or is the biscuit too prominent and would only work in a cake or cookie type recipe?

That’s actually a VERY good question. As far as a straight “butter” sub, perhaps not, BUT, only because of the delish biscuit hiding in there. NOW, with that said, it COULD still work perfectly, in, as you stated, a bakery, cookie, cake.

My end of line, would be buy it, and try it. If you were to be needing JUST a “butter” it might bring MORE to the party than you need. BUT, if it’s one of the above mentioned, I would say YES, it would work great !!!

@SessionDrummer I’m also in love with big water melon. Glad to see you spreading the good word. If youre bored [SIZE=3][url=“http://tjek.nu/r/h91b”]Toasted Marshmelon Cream

I got your back Coop.

Thank you very much for your SF reviews,very interesting and much appreciated mate.
Would you say that Butter My Biscuit and Cookie Bite are good substitutes for each other then as I only have the latter?

@Lucas_James_Holden you’re very welcome. As far as subbing the Butter My Biscuit and the Cookie Bite, you could sub them, but with differing effects. The BMB really kicks the butter into high gear, while the CB has reduced butter, but more Almond notes, so it’s hard to quantify exactly how they’d fare.

Thank you very much for getting back to me and answering my question. I’d better get the other one as well then as I love my biscuit flavours especially in custard recipes and the likes.

@SessionDrummer I thought I covered all the notes. Maybe I missed something. Did you try the Yellow Cake? Someone had a pic of it above but I didn’t see any comments on it. It’s listed as a new flavor on BCF. Thx 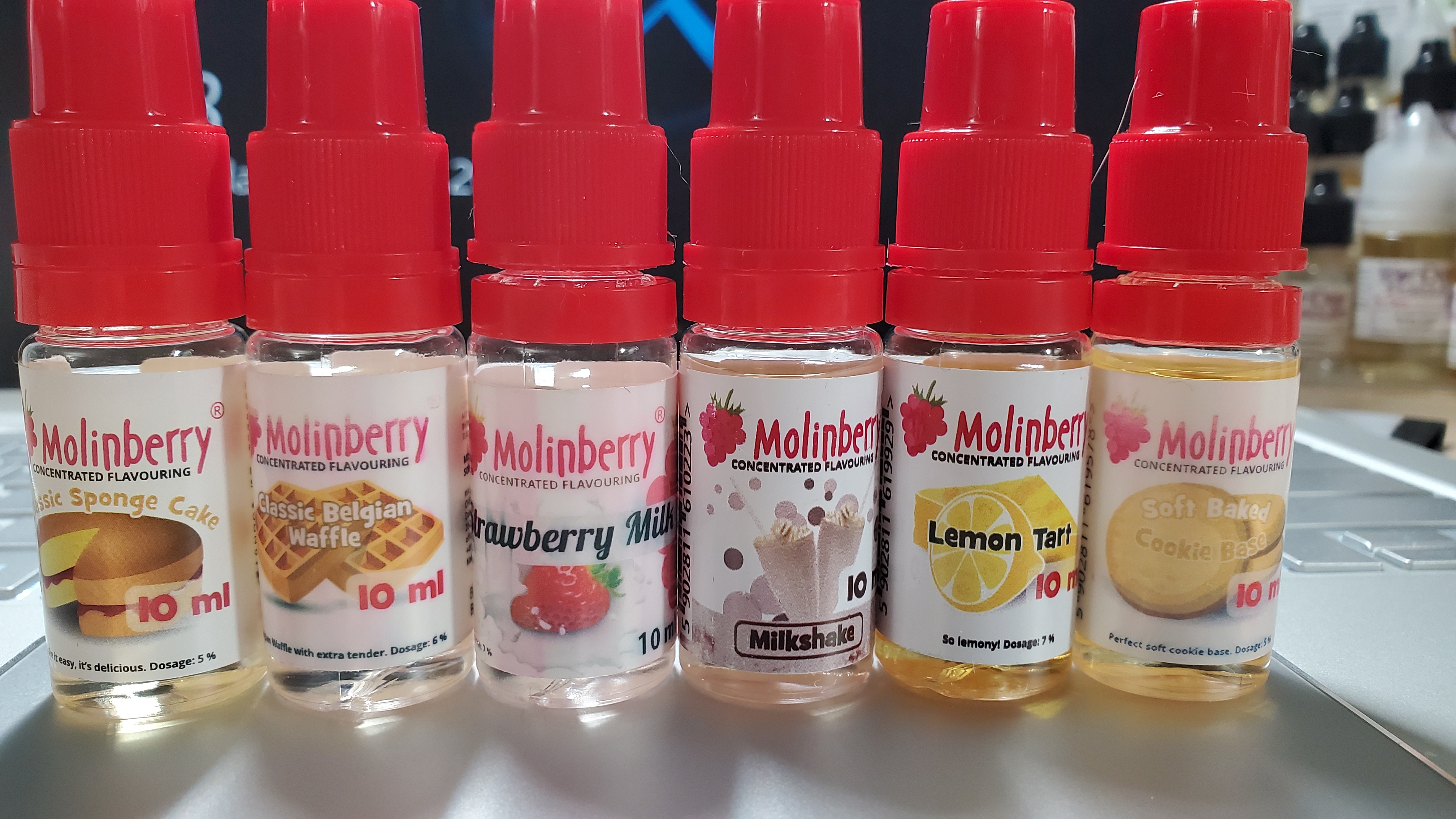 Strawberry Milk (Molinberry) 4.5% (2-7-21) – Firing up for some more Molinberry’s with this Strawberry Milk. Out of the gate, I would say this is a one-shot, meaning it’s good to go as is, and no need to tweak it at all.

Yeah, it’s that simple, and that good. Now you could push the dairy if you wanted, or sharpen up the SB as well, but if you didn’t, you wouldn’t mind a bit. The SB was more artificial than real, but it suited this mix, with a nice smooth dairy, which really gave the impression of milk. Nothing malted, or forceful in it, but just a nice, clean dairy note, that was paired perfectly with the SB. This one was soo good that I had almost finished off the second tank before I remembered to review it, and that’s always a good sign. 4.5% felt really good, nothing off-putting, with a bump above mid-level sweetness. For a seemingly simple 2 element flavor, it was a very nice vape, and kept me interested. Easily a 9.8/10.

Soft Baked Cookie (Molinberry) 4% (2-13-21) – Squeaking in a few of these as I have time. This one turned out to be exactly what they said it was, a smooth cookie base, nothing more, nothing less. Many cookies are nudged one direction or another, which can limit their uses, but this one was absolutely neutral, and no choco, almond, or any other clear elements added, which left it dead, spot on, in the base camp. It wasn’t a terrible SFT, nor a terribly exciting one, hehe, but such is the nature of testing. At times it leaned almost towards a Toll House (but without any choco chips), and others it leaned slightly darker. @ 4%, it was actually somewhat lighter than expected, with mid level sweetness. It had some similarities to MB’s “Butter My Biscuit”, but with a much more relaxed bakery, and reduced butter. If you have the BMB, and like it, think of this one as a reducted version of that. With it’s clean neutralness, a baser is exactly where and how you would use this one, tempering it to whichever direction you needed to go. All in, pretty convincing, and although SFT’ing isn’t always exciting with “one-shot”-ish flavors, it’s the pieces and parts that make the recipe. Placing this at a nice 8.75/10.

Milkshake (Molinberry) 5% (2-13-21) – This one was a WOW right out of the gate. A clean milkshake with hints of Vanilla, and a delicious creamy mouthfeel that rode all the way through the vape. No off-putting notes in this one, and the texture and mouthfeel were very present and worked almost flavwlessly here. No sour notes, no BA, and the cream notes danced between a milk and then a cream. Quite an interesting vape. Completely convincing to its namesake, and might just be the best Milkshake I’ve tried. Slight, almost malted notes at the very end of the vape, but the entire vape up to that point was clean, sweet, and creamy. Worked through two tanks figuring something would rear it’s ugly head, but nothing did. If you want a great lightly vanilla-d milkshake with plenty of cream and milk, with good mouthfeel, this one WILL do it for you. The texture, and mouthfeel def. help sell it, and they sell it good. Will review my other notes, as there’s a lot of them, but this may just be the best MS yet. 10/10.

Classic Sponge Cake (Molinberry) 4% (2-14-21) – This presented as a lighter flavor than many of the other MB’s so I had to invest in a second tankful to make sure to get a read on it. Def. got a lighter cake from it, with above level sweetness, and no icing, which was perfect. @ 4% it was a relaxed flavor, so pairing with it would require some restraint as to not overwhelm it. As it stood, a very nice, lighter cake with just enough sweet and bakery to sell it. Try as I did, I couldn’t really nail down any direction for the cake, i.e. Vanilla, etc., as it was fairly neutral. I did slightly get some of MB’s tried and true BMB bakery in here, at a very low level, but I could detect it. Somewhat in the same ballpark as Flavor West’s Yellow Cake, and Jungle Flavor’s, but more delicate, and more neutral. There were some light buttery elements in there, but I wouldn’t call it rich. Surprisingly, even after 2 tankers, I wasn’t fatigued, so that’s always a good sign. A fairly neutral, sweetened cake, that was somewhat relaxed, with no icing, this one did what is was supposed to. 8.75/10.

Molinberry is new to me, so figured I’d better change that. Place holding for now, finalizing percentages shortly. Big Watermelon {Molinberry) 6% (1-26-20) – Mmmm, this one’s a great Watermelon. Right out of the gate, on the first vape I knew it. At 6% this was very nice and full, middle level sweet, with a very intelligent mix of the red and white parts. Mid-low, mid, and high notes were all present. Very watermelon-ey. It actually leaned quite heavily to natural as opposed to artif…

Lemon Tart (Molinberry) 3% (2-15-21) – It appears as if Lemon Tarts are becoming the rage now, and I wanted to make sure to test this one as well. Smelled really good and accurate in the tank, and vaping it, it seemed to loose some focus, and almost went 2 dimensional. Not bad by any means, and the two main elements were present, Lemon and Bakery, and they were mated well. Continued vaping revealed to my tastes, this one would be a solid “baser” and could be pushed/pulled as needed. It’s hard to explain the 2 dimensional aspects here, but it was like some of the high end (lemon punch), and low end (bakery/crust) had been culled, and the middle section was left. Again, not terrible, but for my tastes, would need to be boosted. Sweetness was about mid level, and nothing off-putting could be found, and the lemon while somewhat laid back appeared to be half natural, half artificial. Perhaps re-testing at a higher rate, might firm it up, and if so, I will update this review. Generally a good one, but just lackluster. 7.0/10.

(added to the database already)

They are released and available in Sobucky and Molinberry shops; i’ve seen some used in recipes at ATF. Sobucky shop1, shop2