Hello everyone. I am starting DIY, and would love to here the flavors that every diy’er should keep a stash of. Your most used flavors. The flavors you reorder again and again.

Hello oleskool1 and welcome to the addicting world of diy!
Your question is kind of broad but it really comes down to what types you prefer? Fruits, tobaccos, custards, bakery, etc
Each company has hits and misses when it comes to flavors and in some cases it comes down to the golden word "subjective"
If you search this forum you will find a lot of similar posts about flavors and opinions on whos is the “best” for example it is argueed capella has the best custards and creams. Where I agree with this I have Bavarian cream from TFA that is my personal "must have"
Marshmallow could be considered a must have as well for it being a sweetener and adding a “mouth” to some mixes
Fuji apple by FA I would also consider a must have for fruit mixes because at very low %s, like 1-2, it adds a nice juiciness to fruits without an apple taste.
Then theres the “master list of ingredients”, which talk about saline, lemon juice, citric acid, etc

What Secret ingredient from the Master List do you suggest?

I think the recipe still needs a little tweaking but the Toffee Dream Cream is actually a really good flavor. A little light on the toffee and very creamy.

All in all if there is a more specific category you are looking for there is a lot of help in the forum here you can use as a guide!
Cheers

Here is the link to people’s OPINIONS on what company’s particular flavor they prefer over others…please remember there is no such thing as a bad company, just like I said, some companies have done a really good job encompassing a true X flavor

Best Of Flavors By Votes Compiled from ECF Flavors

This is list that has already been voted on and these are their results of top flavors Link to Best of Flavors By Vote and other useful Docs from ECF. Best Of Flavors By Votes Tuesday, As of : May 13, 2014 4:38:46 PM 242 Total Votes cast For 162 Flavors VENDORS AND ABBREVIATIONS Bull City Vapor BCV Capellas CP DIYFlavorShack DFS eCig Hellas eCig eCigexpress eCx FlavourArt FA Flavor West FW Generic Products GEN Hangsen HAN Inawera INA LorAnn Oils Inc. LAO LIQUA Flavors LIQ My Freedo…

Also there are a handful of companies that have come out with super concentrated flavorings and I believe these to be “must have” companies for the fact you do not need to use as much to reach your goals. Here are a few…FlavorArt, Inawera, Flavorah and more…

I would think the top 30 or 40 are essential for a good beginner stash. I’m sure you will get a different answer from each individual, but this is a list by the most used in recipes here on ELR.

This list is by no means the best of each flavor. TPA dominates this list. It’s the most used in almost every category. I’ve been trying to compile a list of best flavors for a while now. This should open a discussion of what are the best flavors. Let’s get this right for our community. 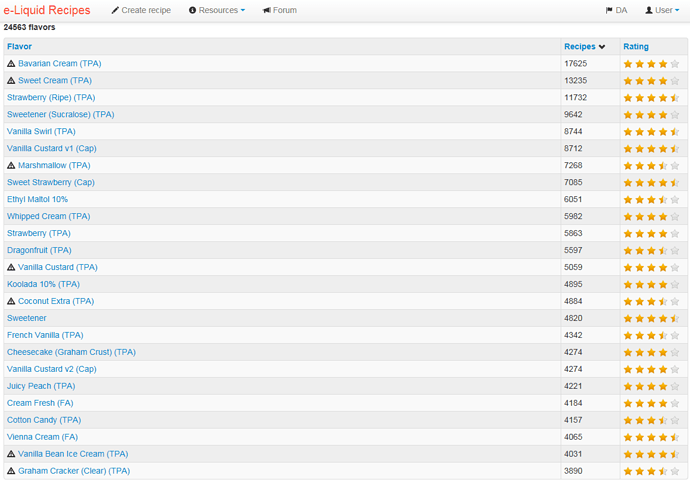 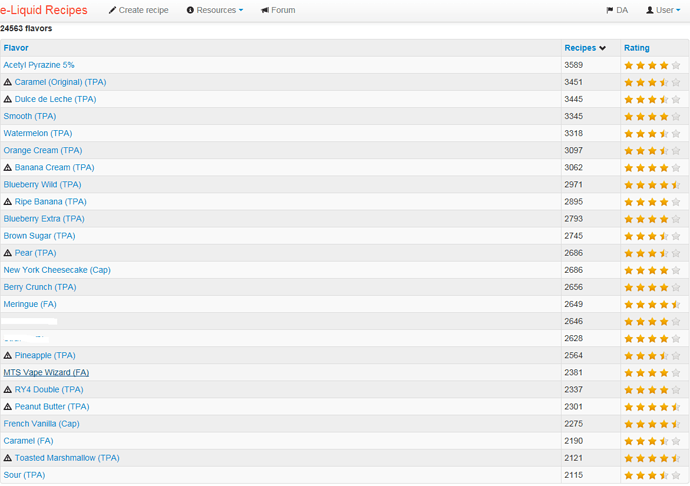 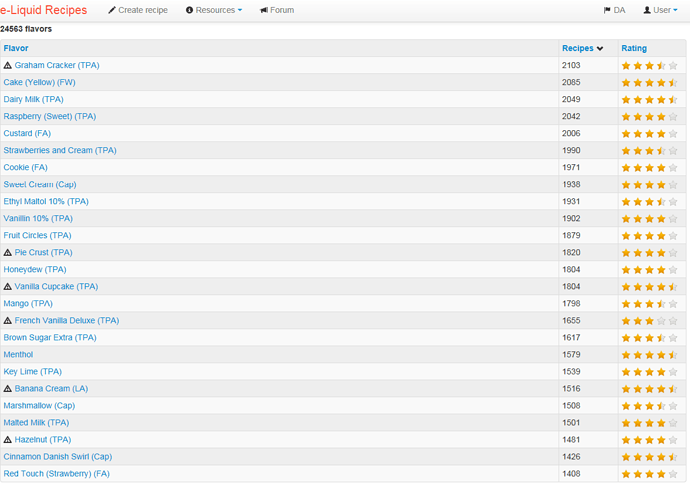 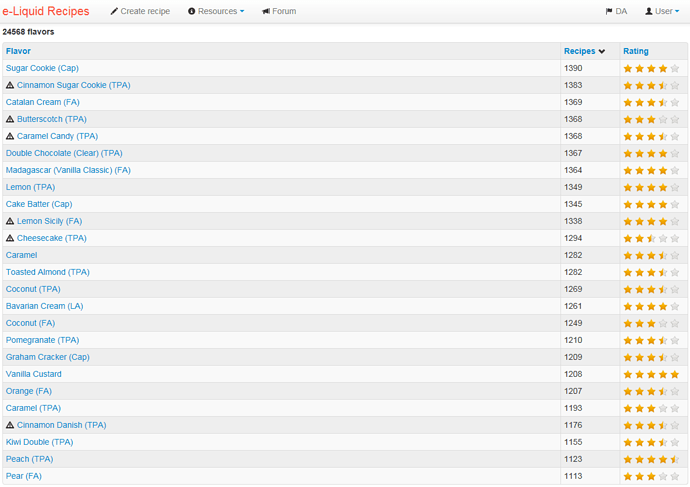 Here’s some more stuff to get you started

If you could only? General

If you could only have 4 base flavores and 4 accent flavors what would they be?

Vape Mail brought me some new FlavorArt flavorings! I’ve tried some of them in a few mixes and WOW! These guys know their stuff. Soon to review: Honey: Very realistic, sweet, rich and true to how honey smells and tastes. I have not tried any other vendor of honey flavoring, due to reading in forums about FA honey. The consensus was true. This smells and tastes, to me, just like clover honey; aromatic in nature, but not floral. It is very strong and would suggest a starting percentage at aroun…

I'd like to hear what people have to say about Inawera flavorings. My next vape mail will bring me some Inawera Flavors I've been wanting to try, after reading some reviews online. On my list is: AM4A (tobacco) Brandy Cognac Godfather (whiskey & amaretto) Peach Sweet Tobacco I'll give these a try and post some reviews. I've heard good things about Inawera.....hope it's all true.

Over the past year I have mostly used TPA and have now started to branch out towards other flavor vendors. My first conquest has been to buy Flavor West, but have noticed on their website that hardly any reviews have been made. When I emailed the company about this, their answers was as follows: We receive over 2000 receive a day and most are spam so we have shut the feature off till Magento (which is our cart) comes up with a spam blocker. Thank You! Sarah Sterns Personal Business Hours: Mond…

Just thought I'd ask whether or not anyone has had luck with Flavor Apprentice butterscotch? I usually do a 10 ml stand alone mix to see what the flavor tastes like by itself. This butterscotch, in my opinion, has a chemical back taste that does not go away with time. I let this steep for 4 weeks. No change. Needless to say, it found a home in the sewage system.

What may be helpful for newer people is a list (short list of say 4 or 5 flavors - not nic, pg, or vg) that people find themselves buying quite often. I know some ppl purchase larger quantities of flavors when they order, but say if you were only ordering 10 or 13 ml sample bottles because your just starting and unsure… which ones have you found needing to purchase often or again? My order I just finished submitting (through BullCity) I needed more Coconut Extra (TFA) and Blueberry Extra (TFA). The order prior to it I had re-ordered Bavarian Cream (TFA), Graham Cracker Clear (TFA) and Juicy Peach (Cap).

what I found helpful was going thru the recipes and writing them down ( the ones I wanted to try ) compairing them and selecting the flavors they all had in common , I ended up with a stash almost identical to what @Pro_Vapes posted on here. The flavors that appeared the most I bought in a larger size, knowing I would be using them more often.

Thank You all. I am reading the answers, and looking at other post links. I found this site looking for a clone of castle long. I purchased the flavorings for that but find they are lacking for other recipes. I guess I really don’t have a category that I stay with I buy things that are good to me while I am in the shop tasting. I will just keep going on buying based on the recipe I’m liking at the time.

@JoJo those all sound good to me. I did get the custard v1, but nothing else to go with it. DIY vapor supply is about 20 min. Away from me. Just dropped about $50 on start up supplies. I am thinking about a few more flavors.

Pineapple I only use LA

Dragon fruit I have both TFA and CAP

Custards
Vanilla custard by CAP v1 or v2 tastes are similar but they are different.

Pie crust or breadyness
acetyl prazaline TFA then Biscuit INW then pie crust TFA the. Waffle TFA ( not Belgian that’s different it has a large amount of syrupy aftertaste ) then cookie FA

*** this is getting crazy no wonder I have like over 500 flavors but seriously this is a good start pick what appeals to YOU especially if your only making them for yourself. Welcome to the the beauty of designing your own e juice it is so much fun and oh so addicting as you’ll see

@Amy2 I thought diy was going to save me some cash. Looks like this can become very expensive. I see some flavors that everyone has on their list. Those are my next purchase.

Just to name a few…

@Oleskool1 I think of it like this, if you cook (and it seems a lot of people here either cook or seems to be in that vocation). You can have just salt or pepper in your cabinet (i.e. pg and vg), or you can have garlic powder, onion powder, sage, rosemary, parsley… etc etc it really depends on what you want, I “thought” it was going to be instantly cheaper but there is an initial outlay to stock that cabinet and of course the learning curve of mixing (btw get a scale that reads 0.01g) really really makes life easier).

Hold on, hold on, wait a minute. I think I had better make something good, at the very least two juices that are vape worthy before I go getting scales. I think I will do my first mixes tonite.

I started mixing about three months ago with syringes and made a couple of good juice’s. But it is so much easier with a scale and much more enjoyable, so do yourself a favor and get a scale befor you spend your money on stuff you dont need and wont use after a couple of weeks.

I agree. Especially if you want consistency. Hell the easy cleanup is worth it alone.

To start I just purchased a few syringes, some pg and vg, and some flavoring. I will use bottles that I saved from juice I purchased at brick and mortar stores. This is my first move in moving to zero nicotine. I want to do it slow though. Most companies it is 0mg, 3mg, and so on. If it works out I will invest in a scale.

Ha ha ha I thought the same thing. I have saved more than $ so it works out in the end ! Start by buying the staples then play around w/ the occasional impulse buy. at least early on you can control your spending then it becomes ridiculously addicting so you’ll be dreaming about flavors and recipes like I do pretty often. Literally this does happen to me

Well it’s official. I mixed my first two flavors. I started the wrong way though. Eight flavors in one recipe, three in the other, which I made up. I did a Castle Long clone that I am going to try to wait until it steeps as instructed. My own mix is simple with RY4. I used what I had on hand, and it is good on shake and Vape. If it gets any better it may become my ADV. I know time can show flaws too so I will wait to mix more. I like it better than store bought right now. Because I live like 20 min away from a brick and mortar that sells flavors I am going to try some simple single flavor or double flavor mixes next. This is the store I live near.