Been here for a while guys. I don’t really post but I thank everyone for the years of info and help creating great juice.

Sooooo, I bought 60+ years of nicotine

Just wanted to give everyone a heads up and say hello!

Which begs the question…how much is 60yrs worth of nicotine and what did it cost you?

That sure is a lot of nic

. I bet it’ll degrade to zero by then

I had 100mg/ml in my same freezer for the last 5 years and it is as good as new so I think this should last a while… maybe not 60 years lol but should be a bit! I store it in sir tight amber bottles that are then vacuum sealed in groups of 3x 120ml bottles.

2 they go back to smoking

We are in a shitty situation

I haven’t got mine in the freezer yet, partly because the weather’s been pretty cool and getting cooler and partly because, well that’s the only reason really.

Anyway just pressing-out the air then tightening the lid on the plastic bottles they came in will do right?

I have seen a few people talking of transferring pouring their base into glass before freezing so figured I’d check that because I can’t see a reason - outside them looking better - to not just freeze in the plastic they came in.

I’ll check the bottle for a mark…

They say they take them straight out their industrial freezer before sending them to us so it should be alright.

I assume the wrong type of plastic could split could be the reason it’s gotta be the ah, right type? 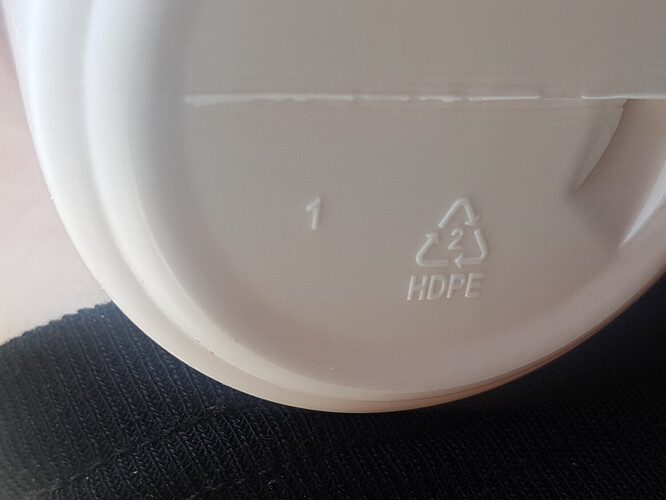 Yerp: there she blows…

Welcome…, not sure it’d last 60 years tho

Not sure, so plz correct me if I’m wrong somebody

HDPE resin produces plastic that is corrosion-resistant and absorbs little moisture, shit where did the rest go…I get what your saying in regards to flavors but even then HDPE and PET should be fine for flavors LDPE is the one i would stay away from

Polyethylene is another type of plastic . Like polymethylpentene and glass, it is compatible with both acids and bases of different strengths. This material is very strong and difficult to break, making it ideal for chemical storage

I freez right into the bottle the supplier shipped in till I break the foil seal. The MFG seals the bottle with inert gas then apply’s the foil for longetivy. Once the seal is broken is when I break the nic base into smaller bottle’s ( I use 60ml glass) so when needed to mix with all that is exposed is that 60ml.
Three things will turn your nic bad. 1)Exposure to oxygen, 2) UV light, 3)Heat.

Vapoureyes site comments on their nicotine actually had one guy who said he’d just ordered the same amount: 60 years worth of nicotine, he boasted in the comments.

Every comment for two pages afterwards was from other vapers abusing this guy for being so selfish: buying them out of stock at least temporarily - everyone else having to wait until the site gets more stock in.

They even turned their anger in vapoureyes itself: wanting to know why the fuck they would allow one person to buy out all their stock and leave everyone else to go without.

I agree: it’s one thing to overreact and grab a few extra bottles of base; another thing entirely to be buying online stores out of the stuff.

Fortunately it’s back in stock now, but the idea someone would buy more nicotine than ended-u can use in their lifetime - leaving everyone else with nothing - then think people would be impressed by the sheer amount you bought without them considering other people then had to wait weeks for more stock to become available…

Remember too that not everyone would order because they’re prepping for the coming bans: a lot of DIYers could’ve run out when they went to order more, only to find there’s none left in stock whole some greedy arsehole is trumpeting it in the site comments, which is about a stupid as buying them out was inconsiderate.

Hence my only ordering 1-2 bottles of base per week between now and the cutoff and I’ve recommended others try and do similar instead of acting like the few clowns did with toilet paper a year or so ago.

For once too, I’m not making any these points to benefit myself: I’m in no way affected by megalithic orders like this and haven’t found sites ot of stock on nic base when I’ve placed orders lately.

Edit: edited to appear less a personal attack, since I’m not personally opposed to OP, but how panic buying can easily result in a lot of others missing out

. Sorry but I don’t see the issue. There are plenty other sites selling nic. Shrugs.

Yeah and here I’ve gotta watch those 30 edits per day so I don’t get stuck with posts full of typoes.

It’s not an issue for us: I don’t know how much you’ve got stored away but I’ve already got a 3+ year supply of base with a few more bottles doubling that amount.

Be a major issue if you didn’t have enough of a stockpile: just a handful of similar orders from a few other people could easily mean multiple sites go out of stock and anyone who found out about the bans late are just shit outta luck, because a handful of people bought enough nicotine to last two generations?

Just doesn’t strike me as a very community minded thing to be doing, especially given nobody needs a 60+ year supply.

There are plenty other sites selling nic

How many places sold toilet paper when the greedy hoarding of that happened a year ago?