Well, I promised. Don’t mind the mess, and don’t take any of the brands that we don’t carry as hints. This is just where we like to mix at work, and this is mostly our personal stashes. 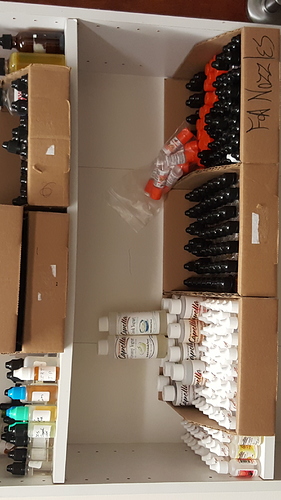 Lol. How do you even find a flavor? Or do you just do Russian roulette mixing. Grab a random 5 flavors and just go for it? Dang it…I should have done that today when I mixed.

i did refrigerate at first then around the cap i got some kind of build up , i guess after that i wanted to see what manufacturer said since they were a little spendy , i do think that using refer keeps flavors a lot longer though

Did they ever get back to you about refrigerating them/ what the buildup was?

never they never answered me , it looked like a sugar build up around the edges

Bergamot SC- This bergamot was a very welcome change from what I had been working with (FA). It is pretty citrusy, but not too much. Also very juicy for a bergamot while still having a slightly green taste (if that makes any sense). Good flavor at 4%, but it doesn’t scream ‘orange’ the way FA Bergamot does (which is okay, bergamot is its own kinda thing). Will definitely use it to mix things up where I was previously using bergamot. Has good taste and its own sweetness.

I am very curious to see what others who have tried FA Bergamot think about the RF version.

@James35
I know you had worked with the RF SC Bergamot, how has that been? Have you tried it above 2% yet?

@fidalgo_vapes
Hmmmm, odd. I keep mine in the fridge but have yet to see anything like that. Must be certain flavors.

i wanna say it was the strawberry and vanilla because for a long time they were the only two i used when i started getting more i already stopped using refer , it could have been the had leaked a bit and being exposed to oxygen it dried up

I made a batch of Strawberries and Cream using Strawberry SC at 2% and Sweet Cream at 1.25%.

I really expected this to be a moderately good mix but after a month, there was little to no cream taste. The strawberries stayed intact but the cream never really came through. After reading peoples notes on the Condensed Milk and Cream (Regular) being very potent, I expected this mix to be pretty creamy. Sadly it was not.

Earlier today, I made a single flavor of the Sweet Cream SC at 4% just for shiggles. I just tried it, expecting some off flavors from using it so high, but to my surprise, it was not bad. No off taste, slight sweetness was present as well as a creamy nuance. I will have to revisit the mix after a few weeks but I think that the Sweet Cream may not be as potent as the rest of the creams, requiring a higher percent.

Will update after a good steep, searching high and low for what other people are getting from this sweet cream, but there isn’t much out there yet.

The watermelon is more of a tame flavor, more like a melon than watermelon for me, definitely not sweet. I can see using it but not for a normal watermelon flavor, I prefer CAP sweet watermelon or LA watermelon, those are both a little more candy like which is that I prefer. I did see @woftam recommendation to add SB and some stevia to it, that would definitely liven it up.

Anyone try the RFSC Coconut? I have a recipe I have been vaping all day and love it but the only ingredient NOT RFSC is INW Cocopilada. I don’t have the RFSC Coconut but was wondering if it is worth it to add to my hoarding pile of flavors

Cocopilada is a coconut with pineapple hints where rf sc coconut is more of a semi sweet cream coconut so they are not really the same flavour. That said yes both of them are great flavours for me

After reading peoples notes on the Condensed Milk and Cream (Regular) being very potent, I expected this mix to be pretty creamy. Sadly it was not.

For my personal tastes, I think the CM VG version is strong.

Cream, cream pie, orange cream, creamsicle. I thinks it’s because it doesn’t have diketones maybe? But I LOVE the SCM. Everything else maybe I need to kick up the percentage. Haven’t tried the SC. But the cream is weak to me. All there creams are very weak to me. Maybe I need to copy you and do some more testing at higher percentages on them. Thank you

Coconut (SC) at 1.5% in a tester was a nice sweet coconut. It did not have an after bite and was more on the taste of semi sweet or sweet coconut that you purchase for cooking, not a “raw” taste. At 1.5% as a single flavor it was vapeable with a nice rich flavor but not overly powering. I use it in replace of coconut extra which I can not vape and am very happy with it. I just did a finger test of the sampler I had mad on 12/29/2016 and the flavor has faded on it by about 1/3rd (2 months ago a finger test was stronger) Using that as a guide I would say if mixing for juice that would be vapped within a 2-2.5 month period it shouldn’t pose any issues, if you were planning on not vaping the juice for 4 months you might consider SLIGHTLY increasing the percentage or adding the ingredient halfway through the steep.

EDIT:
The flavor notes I have in my database for the ingredient is…
The SC Coconut has a nice smooth flavor at that percentage.
I wouldn’t use it as an all day vape, just too plain, but it does have a good
semi-sweet coconut flavor on the profile of what you would purchase for
cooking or baking, the sweet flaked coconut. I am not getting a “bite”,
but the flavor does seem to linger for awhile in the mouth, at this percentage
it isn’t unpleasant (which is what I get from Coconut (Extra) to the point I can’t
use it at all even in small amounts). All in all it seems to be a good flavor to play
with for a bit of sweetness and would most likely be a good addition to cookie
and/or candy type recipes… after adding to some Bust a nut, the jury is still out
if (at least in the percentage I’ve used), it may have made it too sweet or candy like.

I finally got around to trying the key lime pie out. I made it at 3% 70pg/30vg. At 10 days steeped, gives a up front key lime flavor, mostly the zest. Then right behind that is a graham cracker taste. The creams haven’t developed much yet for me, though they are present. This flavor is turning into something pretty good. My initial snv was not so good

Had an odd note, perhaps the key lime not playing well w/the graham cracker. But w/time, I feel this is developing into a great flavor

You should try Bread Pudding SC V2, it’s a day and night comparison.
i does not need to steep that long either , it got to its full potential in 7 days.
I believe this can stand on its own and i am still breaking my head on what to use or mix with it.
Finally i made some samples with their SC Vanille ice cream and SC Cinnamon Custard to see if expand the use of it, but for now it’s a little jewel on its own.

On a side note, the SC Coconut spiced Rum is my favourite, i used it in several recipes that are posted under my profile.
cheers…

You should try Bread Pudding SC V2, it’s a day and night comparison.
i does not need to steep that long either , it got to its full potential in 7 days.
I believe this can stand on its own and i am still breaking my head on what to use or mix with it.
Finally i made some samples with their SC Vanille ice cream and SC Cinnamon Custard to see if expand the use of it, but for now it’s a little jewel on its own.
Big thanks for the reviews

On a side note, the SC Coconut spiced Rum is my favourite, i used it in several recipes that are posted under my profile.
cheers…

I did. Can’t stand it. Has an off taste too me that is offensive. All I get it baked bread crust and some weird seasoning that doesn’t taste like cinnamon.

I love the bread pudding V1 VG version. Haven’t tried the SC yet until I burn through my stock. I mix it with Cap Vanilla Whipped or a Vanilla sauce I made to change things up sometimes. But most the time I single flavor it.

V1 in VG or SC are the Canadian based bread puddings, SC V2 is a new version based on the American version. While bread pudding 1 is based on a Canadian recipe, we really wanted to get a different view of this homemade treat. These is no maple in this blend and includes more raisins and frosting, at least according to their own saying

Maybe it’s the northern part of the country, or just that part of the local area… no bread pudding I ever had tasted like that lol
Okay to be honest I haven’t tried a finger test of the sampler I made of it 5 weeks ago, I probably should…
Okay, off note is still there. I will say that it (and there was one other flavor that had that note… French Toast v2, finger test confirmed) are the only ones that I can really say I disapprove of, which means I most likely won’t use.