Show Us Your Fish Tanks

After following @Englishguy’s fish tank story I have been contemplating setting up another large tank for my son and I to tinker with. He has been begging me for a pet, but where I live, no-can-do. But a fish tank would be cool

I used to raise and sell fish, so I am thinking about some Oscars. They look at you and almost wag their tail when they get excited at feeding time. Such a cool fish.

Or I was thinking of getting crazy with a cold water Discus/Neon Tetra tank. Discus are hard to raise, but a very cool fish.

Anyway, I need inspiration, and I am sure some people here are into fish. Show us your tanks! 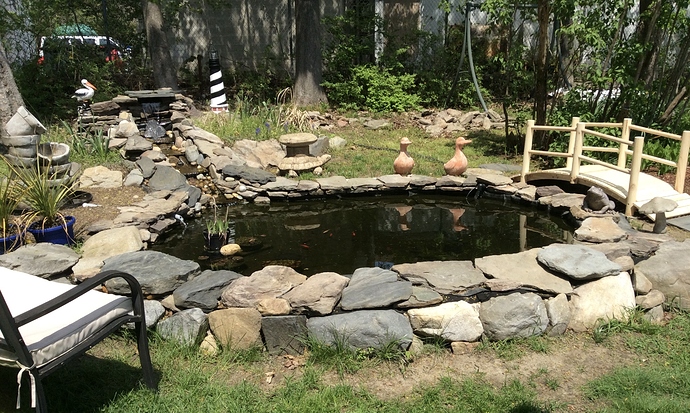 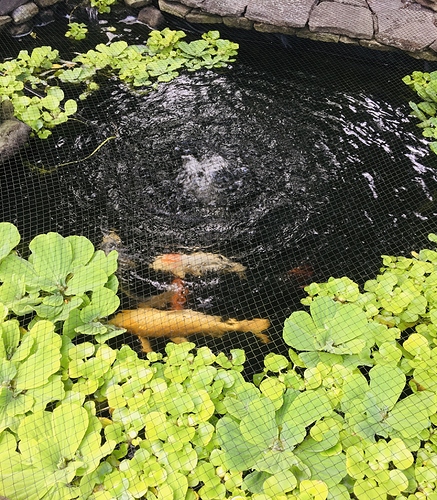 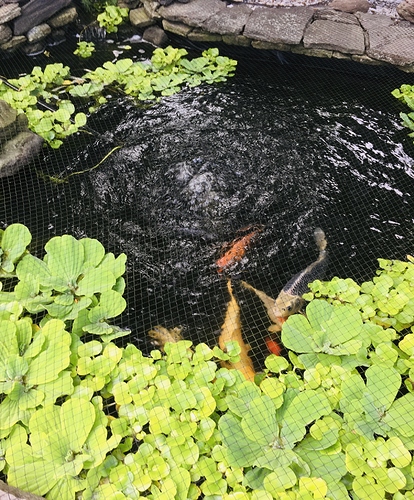 Very cool! I always wanted a pond. Just never had a place I could have one. If I lived in Florida I guarantee you I’d have 16" Oscars in one lol.

Edit: I am curious… what do you do in the winter? Those Koi do ok?

I’m in the Northeast, no problem in the winter with it 2 ft deep, they do fine under the ice and don’t eat under 37deg water temp. Just gotta keep a hole in the ice for gasses to escape, I use a air pump and / or a floating heater

Ahh cool. You guys have those invasive Snakeheads up there? I saw on one of Jeremy Wade’s shows where there was a species of them that have adapted to cold water and are terrorizing the northeast.

No not this far North, Yet, that I know of. Got plenty of snakes though, they like getting in the rocks around my pond, I imported all the rocks from Pennsylvania, “Pennsylvania Flats” they call um. Had to put a net over pond now cause the coons were fishing at night 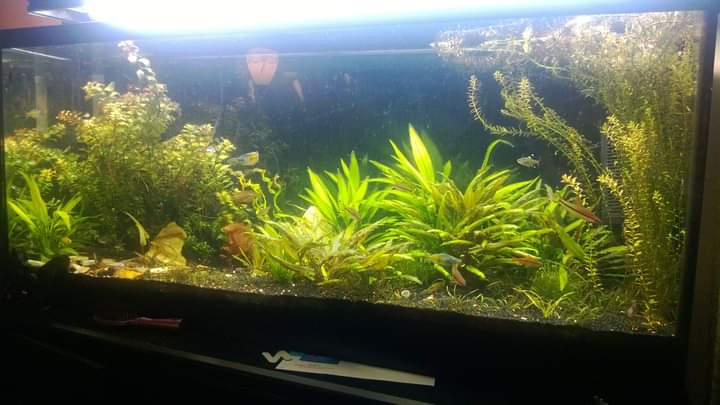 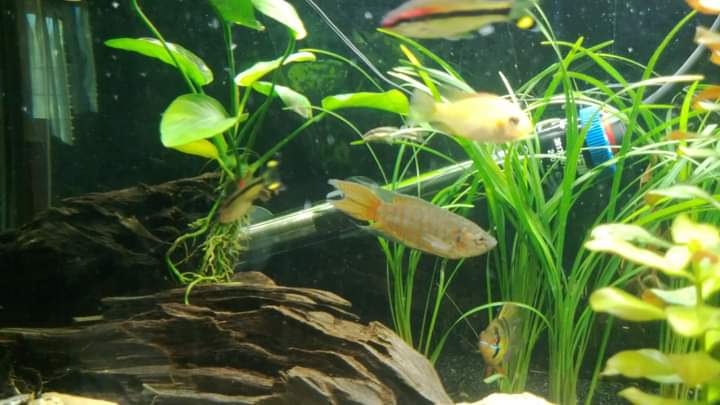 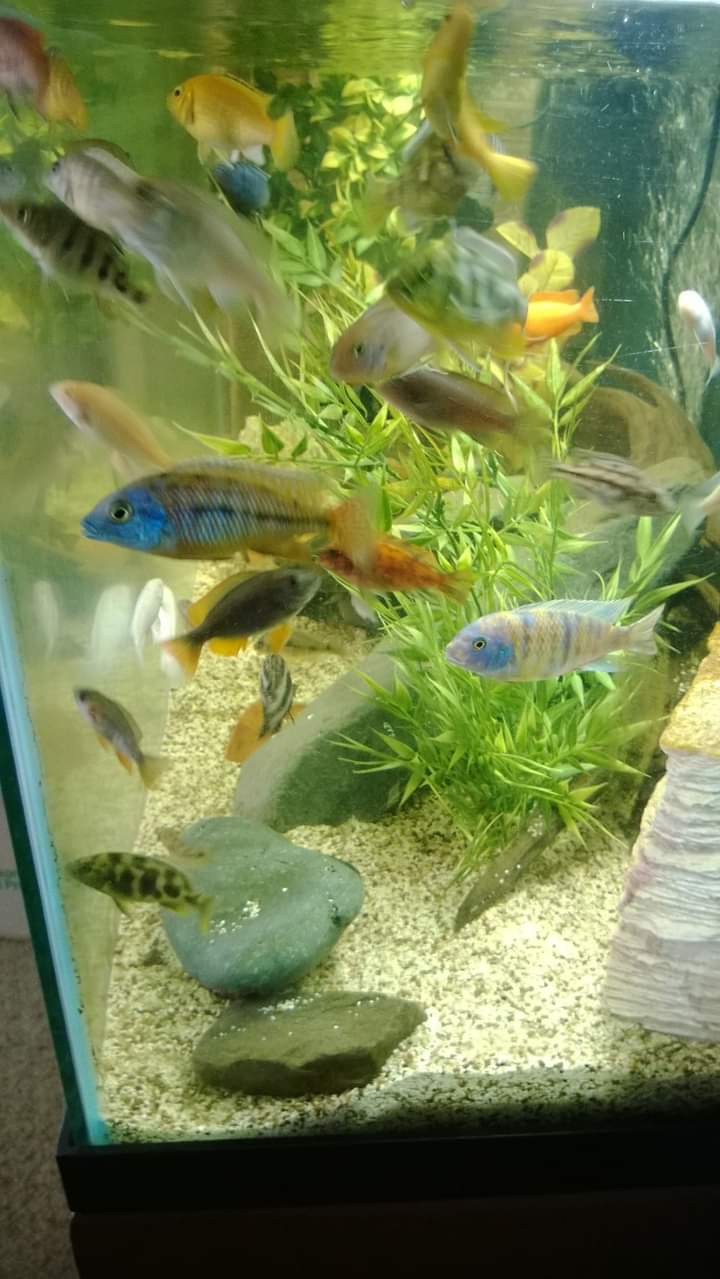 Few of my old tanks or same tanks at different stages. Nothing set up atm but probably going to get 1 set up in my sons room tonight or tomorrow

Top 2 are same tank and same fish. We turned it into a guppy tank after we lost all the fish pictured.

Love the plants! That was the only downside to Oscars. They destroyed the turf. It’s funny that of all the fish I had I never had any African Cichlids. My dad had some Convicts that just wouldn’t stop breeding lol. He had like 600 of them.

Yeah they’ll destroy anything and also move around decorations as well. Some people put whiffle balls in with them and they’d play with the balls.

Thanks that was one of my favorite tanks with all the live plants. Even with all the upkeep. I think that was the medium stage of that tank, it ended up making enough plants for most of my others at the time. The cichlid tank was awesome once it was finished most of the fish were 5" if not bigger. Unfortunately I had my dad watch my tanks for a few months and my tank boss red shoulder died, after that everyone fought all the time and never really recovered.

No tank pic, but an observation to share… My hobby is photography, my wife is the Fish Monger. She has 5 marine tanks, and sells a lot of coral “frags.” I belong to a local photography club. It’s 95% old white males. A couple Latinos, no blacks, a few women. I hang out in a few on-line photography forums, and most are international. But again, the majority are old white males.

My wife has a constant flow of fish people coming to the house to buy the frags, and I started noticing something. The fish people are all over the spectrum. All ages, all races, all genders. One day a middle aged white guy showed up driving a big black BMW and wearing a $1,000 suit. Half hour later, two Mexican gardeners showed up, caked in dirt and driving a pickup truck loaded with landscape gear. There is a 12 year old Asian kid whose dad delivers him about once a month to buy corals, and he sometimes loans the wife some high end chemistry test equipment. Sadly, she now does only “curbside” business, so nobody comes in the house anymore.

I used to raise and sell fish, so I am thinking about some Oscars.

I kept an Albino Oscar, among others back when I did freshwater and salt (reef) tanks. And you’re right! Mine would see me approach his tank and get all giddy, wagging his tail. They’re smart creatures but very territorial! Had to be careful choosing his tank-mates, otherwise carnage was inevitable! Having a community tank is pretty much out of the question with Oscars.

Agreed. But if you buy baby Oscars and introduce them to an established community tank, they can get along somewhat. I had an Albino and a Red Tiger that grew to 12" in a tank with fish small enough for them to eat in one bite and they never ate them. I also had two Red Tail Sharks together that were about 1" long (they fought each other like crazy lol) when I got the Oscars. When I had to get rid of the Oscars the sharks were probably 4"long. I loved how the Oscars would try to bully the Red Tails and they stood their ground. The Red Tails can be a bit aggressive too, like little Chihuahuas.

I love Oscars and it’s cool to see other fans of them. They are the smartest fish I ever owned and I had a red tiger Oscar that would eat from fingertips.

The only other cichlid I’ve owned was a Jack Dempsey. He was medium size when I got him and it didn’t take but a few hours to figure out why they name them that. They are twice as brutal as oscars. Had to unload him after a week.

Yeah, Jacks, they are assholes. I had one years ago that kept bullying my other Cichlids. He was about 4". I tossed him in with my monster Oscars and he hid under a rock til I got rid of him.

I had a plastic hoop that I used to use to show my friends how smart Oscars are. My Red Tiger would swim through it, look at me, wag his tail, then swim back through. More like a Labradore than a fish. I could feed mine too, but only if the food was like worms or grubs so I could keep my fingers back. Mine drew blood a number of times trying to get a pellet out of my fingertips. The worst time my Tiger did that he hung on my finger trying to rip a piece off. Those bony little teeth hurt! 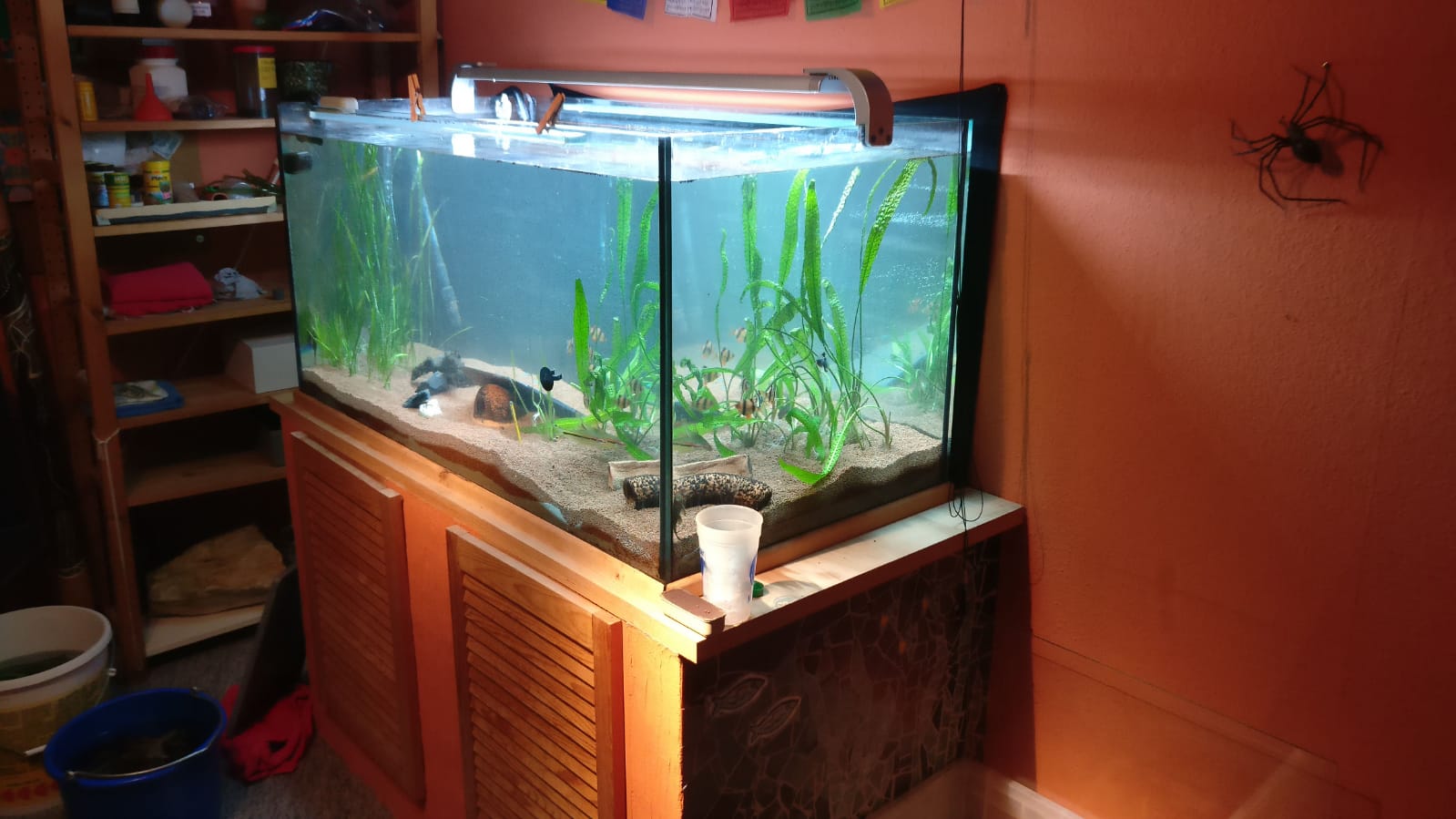 Unfortunately my fish tank is in Germany and my Mom and a friend are looking after it. That’s why it’s a bit neglegted at times but this summer I emptied it for the first time in about 12 years to replace the sand and add a heating for the ground and new nutrients. The photo was taken on day 1 after getting the fish and plants back in. I know it’s looking sad at the moment but I’m confident the plants will grow well now.

@Gsnap’s first picture looks excellent, I’m aiming for a similar amount of plants. In this tank I never achieved that in the past because it is just too much volume. The next tank will be a bit lower (20" instead of 24") or I need more rocks and possibly a laminated 3d background.

I don’t know the english names of the fish I’ve got in there, some red neons, neon tetras, 3 shrimps and a lot of the “window cleaner” catfish, “red stripe torpedos” as they are called in German and I can’t remember the name of the black/orange ones.

I wish I could have an aquarium here in the UK but right now with Brexit on the door step I’m not sure if I’m still here in a couple of years (or less).

A friend wants me to swap the big tank for many little ones but that’s not my cup of tea. I prefer a lot of water to have some chemical buffering effects. Small fishtanks can react way to sensitive to small changes and in my experience they are harder to keep healthy.

Yeah, small tanks kinda suck. One day things will be fine, and the next day it all goes to shit. That is what I loved about Oscars. For one, you have to have a big tank. And they can also live in various water conditions. You can put straight tap water in a tank and they will do fine lol.

Plecostomus is what I always had for a tank cleaner. They can get huge as well. I am not sure what the actual name of the ones you are talking about are called, but I have seen them. All mine were the brown striped or polka-dotted variety. 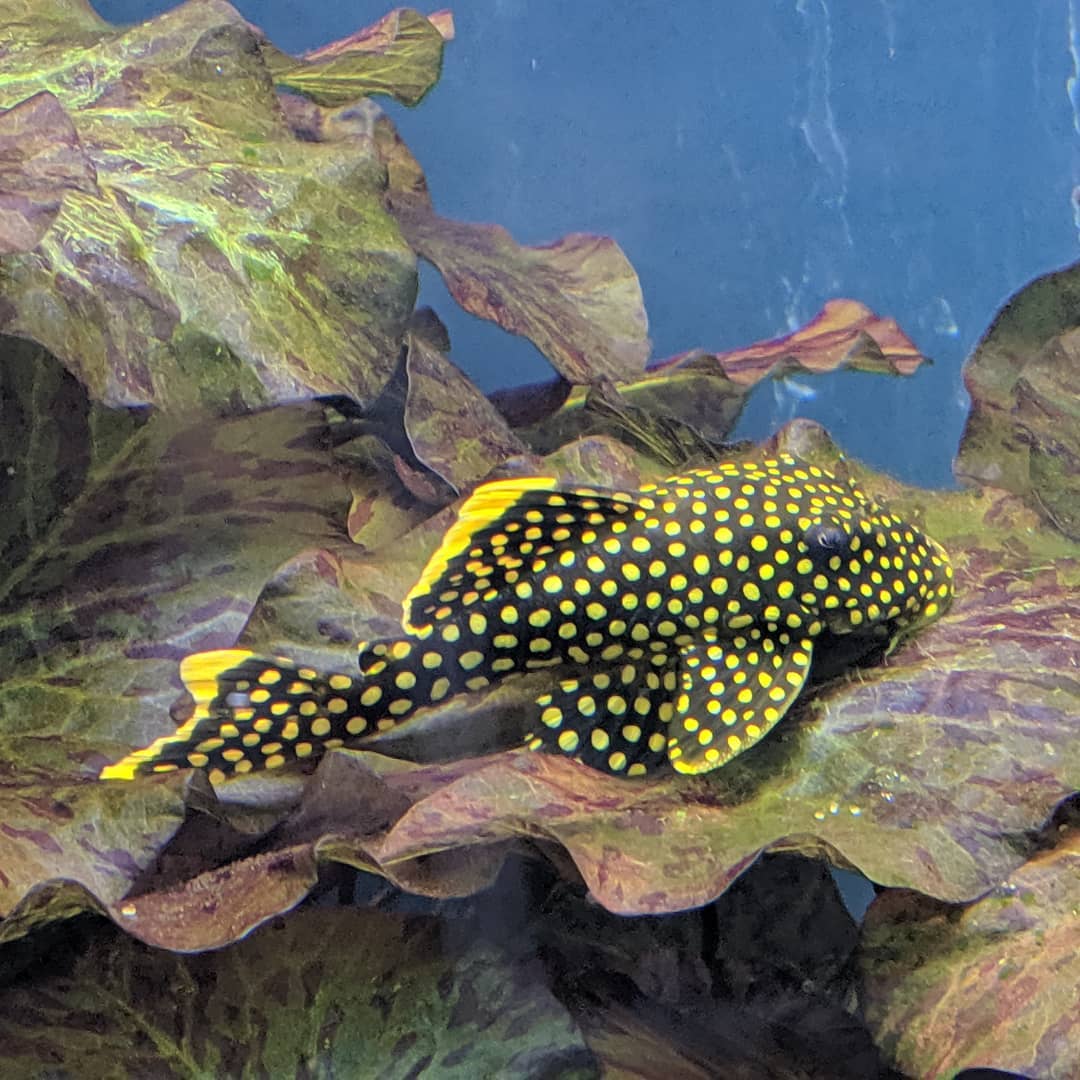 The catfish I was talking about is pobably in every 2nd fishtank in Germany. It’s an “Ancistrus dolichopterus”, we just call them ancistrus or even tank cleaner (yeah, i know…)

The black/yellow one and the one from @LordVapor’s pic are really nice. Again, no clue what their name are but in Germany all these “special” catfish classified with L-numbers. I’ve had a few L-46 in the past and a Pterygoplichthys gibbiceps. The pictures are a bit misleading, the gibbiceps gets really big, mine was about 10 inches. The L-46 are small, never get bigger than about 2 inches i guess. 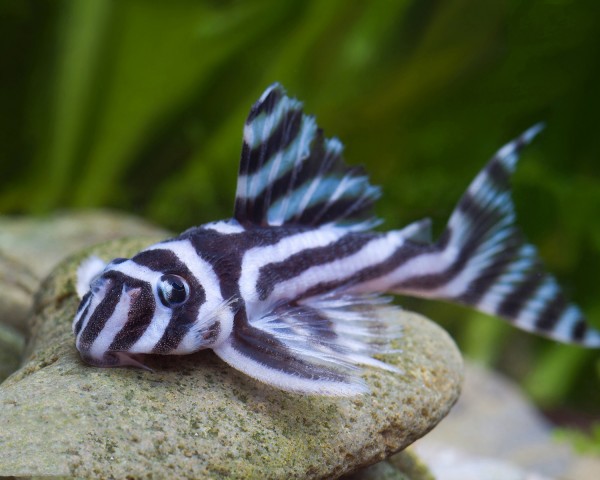 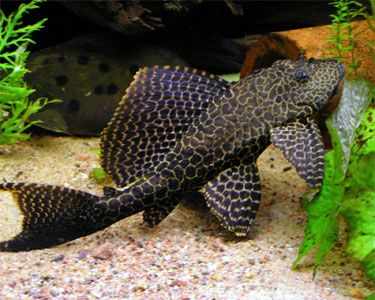 Oh and my favorite catfish, had one for over 15 years
Synodontis Nigriventris, upside-down catfish 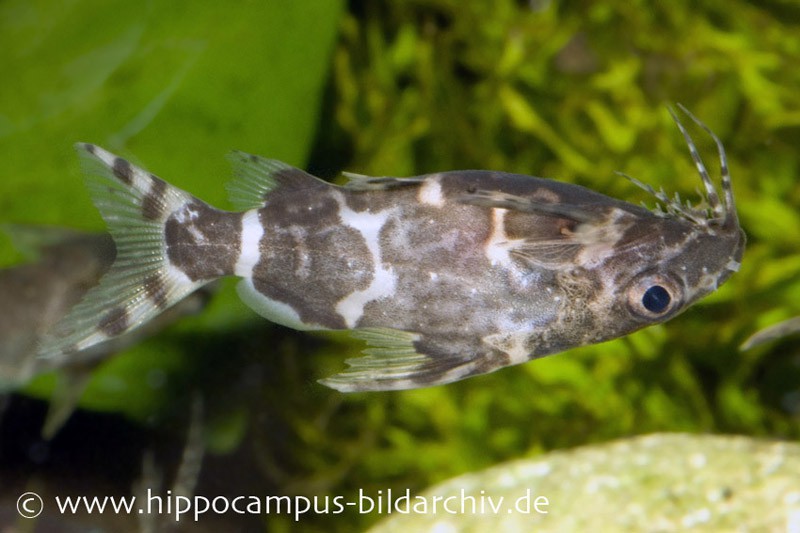 I think my favorite tank has to be one I stocked with fish local to my area. I had a small Channel Catfish, a Striped Bass, a couple Bluegill, and a Crappie.

I wonder how well a Walleye would do in a 200 gallon tank? 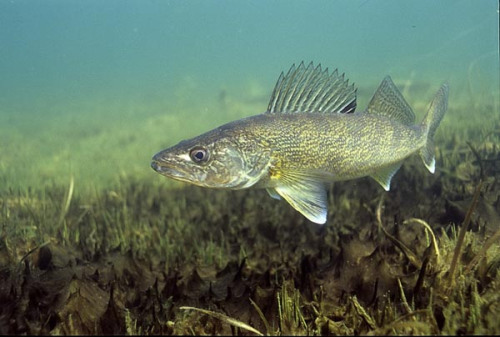