Maybe maybe… sure I can see that.

Mental illness centred on juice obsession, what it is

Ya i hear ya it would be great…Once i hit 500 flavors I purged a bunch . I gave a lot away that I didn’t use that much anymore or only used once. Most of them were TPA and FW because I thought I was moving on up to better things …Soon after I found myself needing a few and even to this day with welm over 1000 flavors I find myself needing a few of those flavors again lmao…

I’ll admit i have my favorites and when I’m making something new I find myself reaching for what I know and like . The problem is it isnt always the right flavor for recipe …Flavor Addiction is real lmao

Mental illness centred on juice obsession, what it is

A hobby is what it is , a hobby that a lot of us enjoy and spend a lot of time trying to discover the next best thing …

Maple tobacco - dunno why I added that, but I like maple and figured why not.

Since the last order I’ve made a point of rolling the dice on one random flavour based purely on the label/description, so I have 1 bottle that’s a lucky-dip kinda deal, just so every flavour I order isn’t predictable.

As you seem to like custards I would suggest you try TFAs Vanilla Custard 2. I bought mine from Vapoureyes… without checking I think $9.50 for a 30ml bottle. I mixed it at 8% and found it absolutely delicious.
Prior to that my favorite custard was Capellas V1 but this one beats it in my opinion. It has a similar taste but I think less of a spicy kick which basically makes it a beautiful deep and eggy custard.

I don’t mean the DX version but the one labeled as 2.

I’ve not tried Vapetrains warm custard so I can’t compare it but of course my opinion is only my opinion.

I like that: I’d rather have a bottle big enough to be useful than try it in a tiny 10mL bottle then have to reorder again.

I will add it to my next order.

I’ve not tried Vapetrains warm custard so I can’t compare it but of course my opinion is only my opinion.

It’s good enough for me to happily stick with it, and though I’ve just ordered Capellas Vanilla Custard v1, I’ve done doo purely to compare.

I just checked and it was $9.50 for 30ml and is on page 6 on TFAs listings next to V1.
As far as I’m aware V2 is a reformulated version of V1, presumably in an attempt to wrestle some of the love from Capella.
The DX is the concentrate with all the nasties removed which personally don’t bother me so I stick with V1 anyway.

That’s pretty much what the Warm Custard tastes like, but they’ve not added vanilla to keep it versatile enough to be strawberry, caramel, chocolate or any other flavour custard you wanna make it.

I’ve used vanilla cream and capellas french vanilla with it and it’s so close to killer custard is my yardstick for determining it’s a decent custard (Warm, I mean)

The DX is the concentrate with all the nasties removed which personally don’t bother me so I stick with V1 anyway.

It reads to me that you would enjoy TFAs V2 so perhaps just keep it in mind for your next order.

I will add it: it’s only $10 and I’ve been ordering twice a week lately

Hope you enjoy it now!

My current mixing mission is trying to get 50mg/mL salt base to taste as good as the 6mg/mL freebase mixes I’ve been missing with.

I need max nic potency which is easy, but means I’m starting with 50% PG salt base for every mix.

Course …i’ve mixed some tonight with the same % of flavourings, but it’s like 30/70 vg/pg aand there’s nothing to be done about it: super funny and all that pg won’t lend itself to dessert mixes, but we’ll heave to just see after it’s steeped a few days.

Most mixes are little 15mL samples, but one 60mL of custard I mixed just to be sure it’s got time to fester without my vaping it.

SO wish vapoureyes at least had the option of 50/50 nic base: for freebase, 100PG is fine but I use a lot of salt base for MTL mixes and 100% PG is fuckin waaay too much PG.

@delltrapp sorry, I am a bit lost in the conversation. Which concentrate are you asking about? I am not sure which one you are talking about where it is used at 2%.

I like your enthusiasm, but imho opinion you should reconsider your approach. First thing is to try to find the cheap(est) vendor (so you can buy more) and the next one is to hold yourself when buying unknown flavors instead of impulsive ordering like you do.

Personally i would never order 30ml bottle of unknown flavor if there is 10ml available. Like usually, Pareto’s 80/20 rule stands with your flavors too. Eventually you will realize that no matter how carefully you pick your flavors, 20% of those will be great and 80% you wouldn’t miss that much/reorder again (and that 80% of time you will be using 20% of flavors, and that eventually after couple of years you will throw away 20% of all flavors you have, etc).

So, the main question is, wouldn’t you rather try 3x more flavors in 10ml bottles and then reorder only those that you like most in big bottles (because a big bottle discount is not that great at the end)?

You’re mentioning some crazy prices for 30ml bottles of FLV… Here’s the price with shipping included to Australia when ordering at Chefs (BUT again - why would you order 30ml of unknown flavor if shipping is so cheap??? Also, FLV’s are often used at 1% of less, so do yourself a favor and order 10ml) 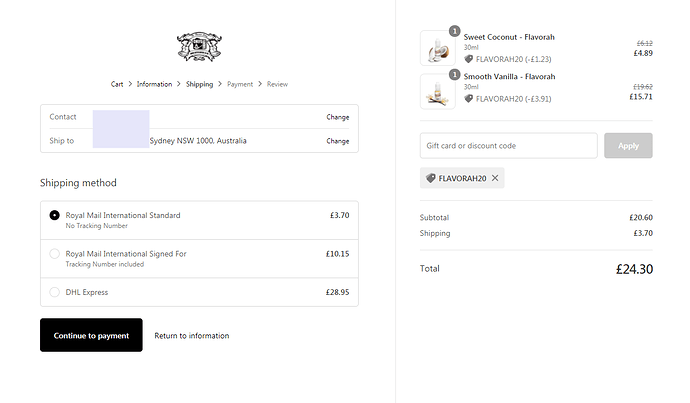 Some food for thought. You might also want to check VTA and SSA (10ml bottles!!!) since you were mentioning those. Not to mention there are bigger discounts available occasionally…