In this brave new world with Temp Control, flashing lights, and endless configurations, sometimes it’s nice to get a setup that is just a quick, easy gas and go setup. No hassles, nothing fancy, just plain simple. I had the luxury of trying out both the Squid Industries PeaceMaker 25mm RTA and their Double Barrel v.3 mod. #IPaidForItMyself, so what I experienced, it what you’ll get. 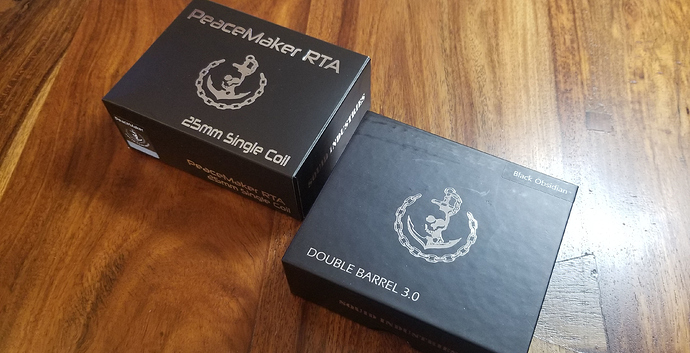 Packaging was a great, no-frills affair, in keeping with the simple mantra. 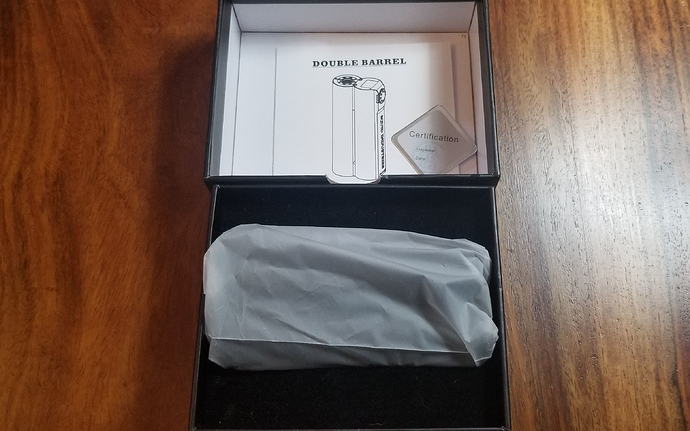 Some protector disks, cert. card, and instruction booklet. The protection disks actually DO help save the finish on the top of the mod as there is NO gap when the tank is installed.

Sexy and simple, including the DUAL use adjustment wheel that doubles as a fire button. 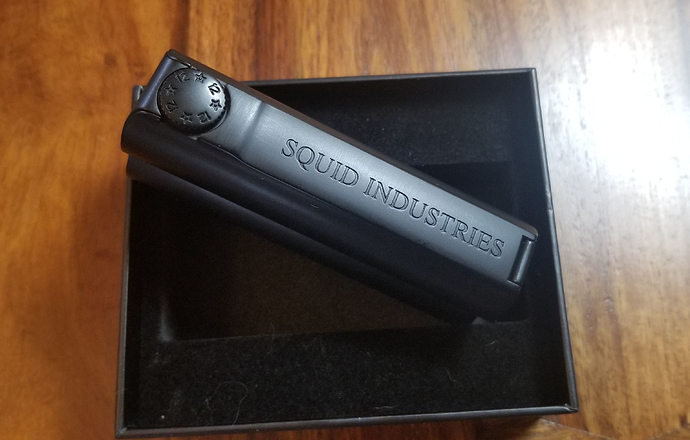 The stainless steel is heavier than you might expect, but is very solid in the hand. 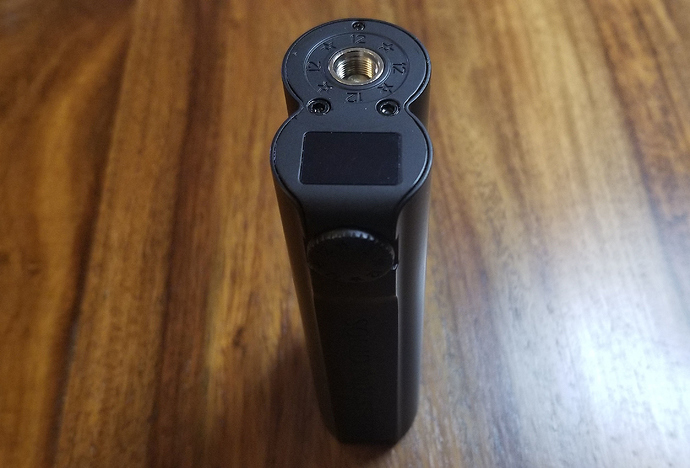 Venting is easily handled by the gap in the battery tubes. 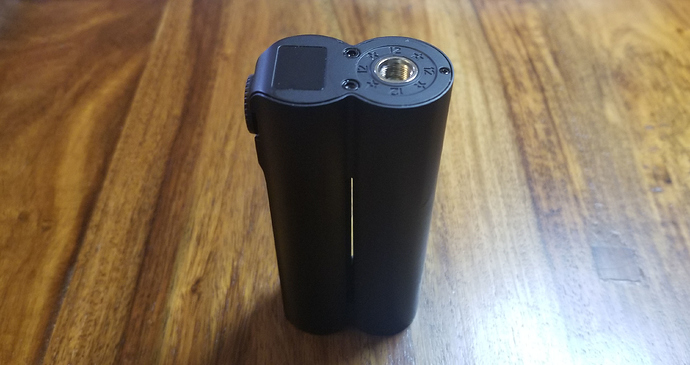 With the redsigned battery door, there were no issues with it staying closed. Nice, secure, and no rattling. 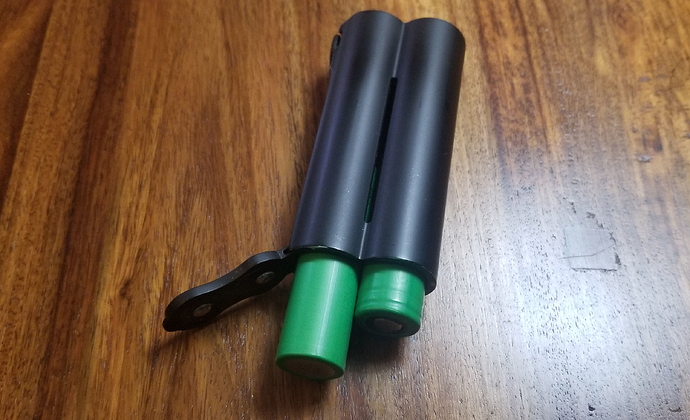 In keeping with the NOT fancy, the 0.47 in. display shows you just what you need, volts, watts, ohms. It is clearly visible, dims after 5 seconds, and eventually shuts off. 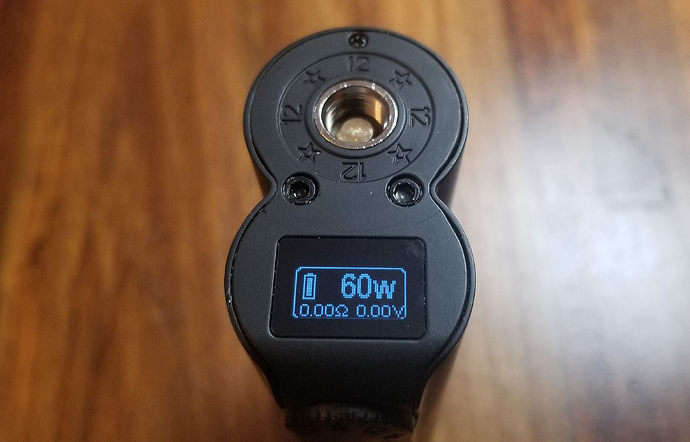 Functions are: 3 clicks – Reverse Display, 4 clicks – Lock Power, 5 clicks – Power on/off. Watts max out at 150 watts with the adjustment wheel, but it’s a one way affair, no round robining. Had ZERO issues with this unit during testing. The adj. wheel / fire button worked great, batteries landed snugly and tight, with no rattles. Battery lid was stiff, but never opened unexpectedly, and overall the mod felt REALLY good and solid in the hand.

The packaging was again, no-nonsense and right to the point.

The 4ml acrylic tank was what I used throughout the testing with the included drip tip, and the two just looked too damned good together. Didn’t even try the included 8ml bubble glass.

Absolutely stunning was the word that came to mind regarding ALL the threads on this RTA. Buttery smooth, and the stoopid simple build deck just added to the wow factor.

With 6 air holes hugging the coil, and the slotless coil ceramic top plate, this one was just begging to be built on. Used the included claptions, and as a single, came out to a hair over .30 ohms.

Wicking didn’t prove to be much harder than loading the coil. I used the 2.5mm ID clapton coils provided, loaded up my typical Koh Gen Do cotton, trimmed the tails to the bottom of the juice wells, thinned a bit so as not to “pack” the tails, and ready she was. 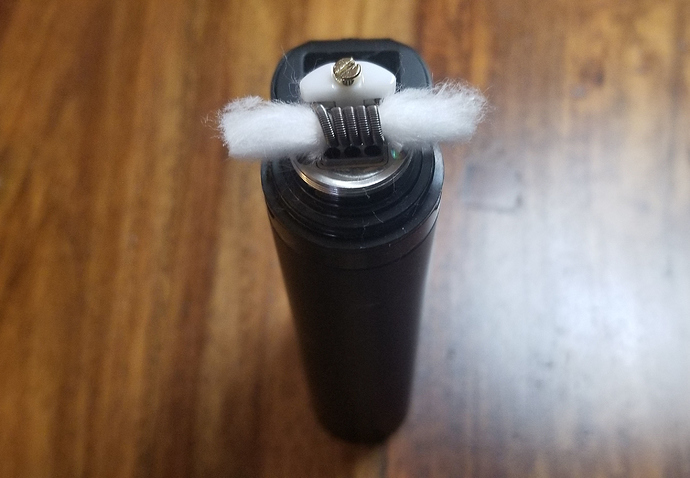 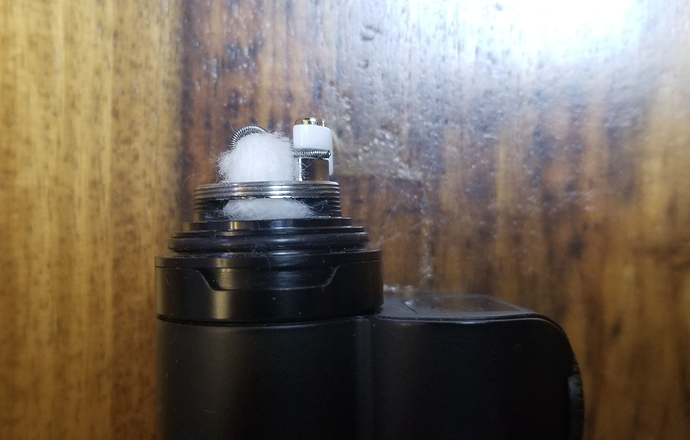 Were there at LEAST some issues filling the tank ?? Umm, nope, nice big slots, even with my preferred Cosmo bottles, was no issue. 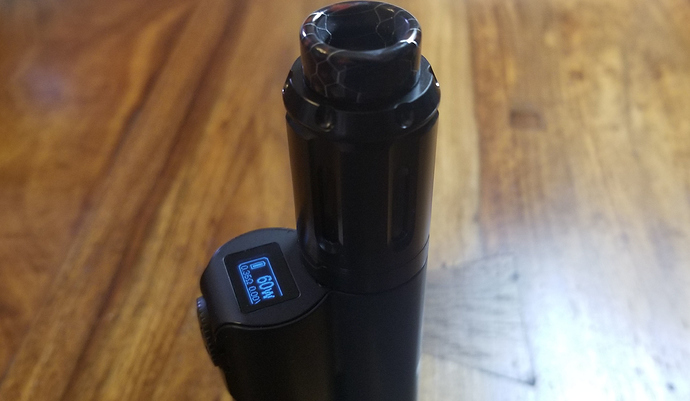 Realizing this is a combo review, didn’t want to get too far down in the weeds on either of the two, but needless to say, both performed flawlessly. The mod / tank setup reminded me of simpler days gone past where you just didn’t have to deal with a bunch of crap, settings, flashy lights, setups, configs, blah blah blah. Just plain easy. I didn’t find anything hard whatsoever during the entire testing. With my 2 go to flavors (custard/bakery and fruit) the flavor produced was pretty damned shocking for me, esp. on a single coil. Flavor was spot on and although I would have preferred a little bit more airflow, the flavor proved to be a really good, dense flavor.

With the opposing airflow slots you could set a wide range of airflow, ALL of which were very smooth, and when full open, I sometimes wished I had a bit more, but this did not detract from the vape at all. No knurling on the bottom adj. ring made it not as easy to adjust, but was still usable without issue. With quick wicking and not much hassle, had no leaking issues, no dry hits, which surprised me, as typically I have to learn how to wick for the setup, but no issues here.

When trying hard to find faults with this setup it became obvious that I was not going to be able to. I INTENTIONALLY over-tightened the ceramic top coil plate just to see how sturdy it was, and I was able to snap one in half, but the amount of force far exceeded normal use. I did accidentally drop the mod a few times, and beyond some minor scuffing, it just didn’t seem to matter. I also intentionally unspooled the outer clapton wrap wire, just a smidge, so it would hit the chimney when assembled, and as expected the unit went into short and would not fire. Display, firing button / adj. knob was perfect, building was easy, and vaping this combo was a super simple experience. 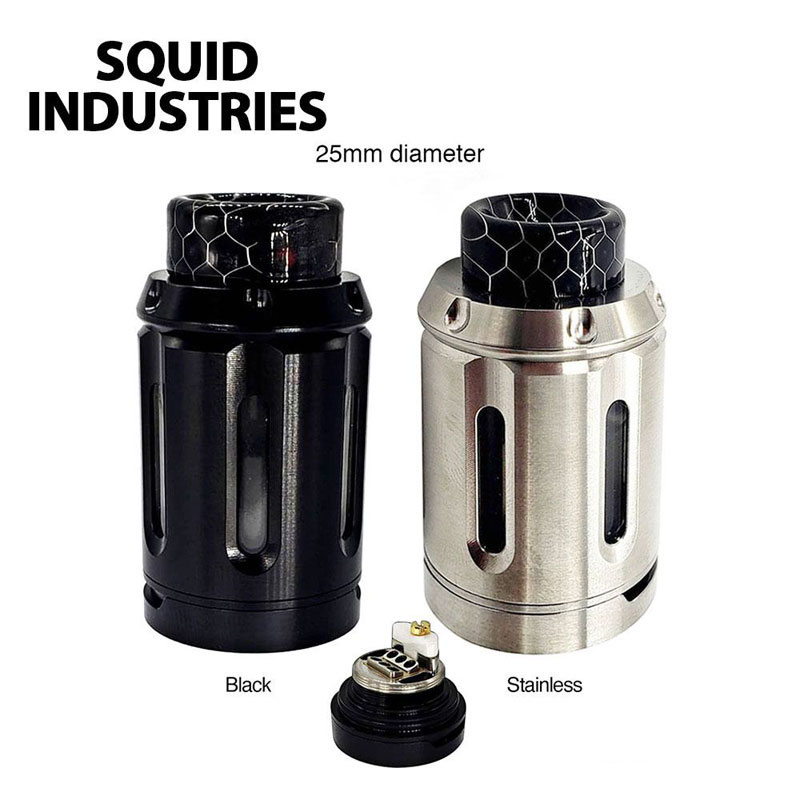 If you are in need of a beefy, great looking, simple to use setup, and you don’t crave all the frills, fancy lights, and configurations, this setup might just be for you. It was a joy to build on, setup, and use. Just set it where you want it, and go. Heavy as it might be, it is very solidly built, and fits well in your hand, with the fire button and display right where you want them. I’d read issues with previous versions of the mods wherein the recessed display was holding/leaking juice, gone, battery door issues, gone, finish issues, gone. They really improved on previous issues with the new Double Barrel v.3, and the PeaceMaker 25mm RTA was a perfect, simple match for it. If easy is what you want, get a pair now. 9.5/10. Thanks for reading… 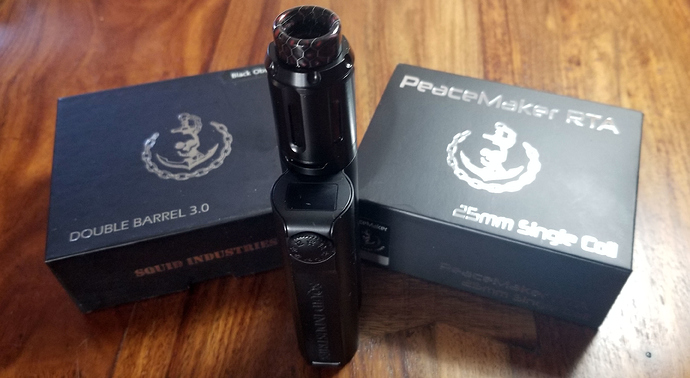 I need you to STOP!
you keep making me want stuff!
Very nicely done dman!

It is unusually satisfying to find something that looks that good actually works well too. Gotta say, it’s right up my street from an aesthetics point

I need you to STOP!
you keep making me want stuff!

Gotta say, it’s right up my street from an aesthetics point

Exactly what attracted me to it.

In this brand new world with Temp Control, flashing lights, and endless configurations, sometimes it’s nice to get a setup that is just a quick, easy gas and go setup.

Looks and sounds awesome, just don’t whip it out at a traffic stop, it looks dangerous 007.

Now I’m getting to the point where I have to consciously decide whether to read a review or not. Because if I do, and the review is good (which they always are) then my will to resist buying goes right in the shitter!
Your review is no exception. Dammit!

One question tho…Is there any significance to the number 12 circling the 510 connection? Thanks brother!

Looks and sounds awesome, just don’t whip it out at a traffic stop, it looks dangerous 007.

@Freddie3 You’ve got to hold one in your hand to appreciate that.

Your review is no exception. Dammit!

Thank you very much @TorturedZen.

One question tho…Is there any significance to the number 12 circling the 510 connection?

No squids over here, only jarheads. Maybe I should shoot the owner an email, and get to the bottom of this.

Now I have to buy something new…yippee… looks awesome I need a change:)

Now I have to buy something new…yippee… looks awesome I need a change:)

Thank you @RexRabbit and if change is what you want, this WILL change you !!!

Thanks for the reviews!

Great review. I’ve always liked the looks of the Squid Industies products. Thanks for taking the time to review it,

Thanks @Stankhammer. @TheTinMan thanks alot. I still can’t figure out why there are not more reviews online for them. I’ve seen the few YT vids, but overall, not a ton. 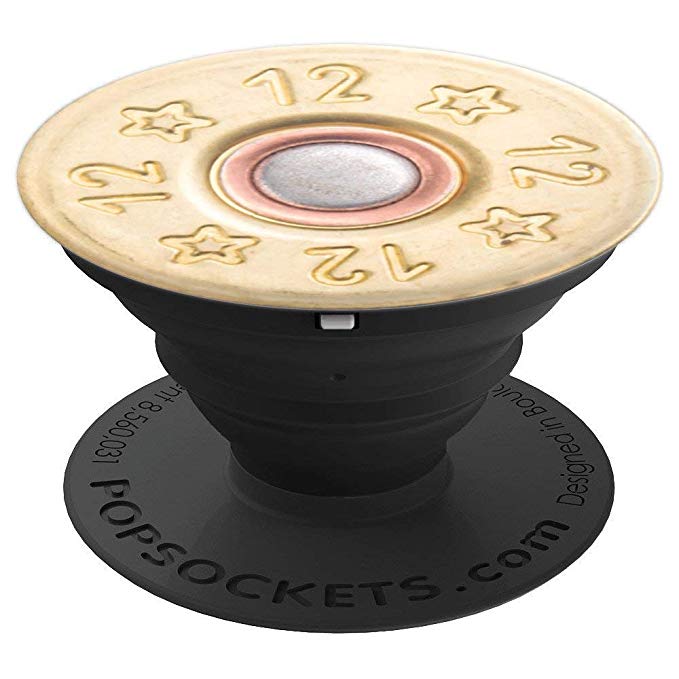 only found one peacemaker rta in US, but they do not ship (like many websites) to Arkansas.

Did you try squidvape (don’t know about the shipping )

Squid IndustriesPeaceMaker RTA25mm /  Single Deck*MSRP $47.99You asked for it, we delivered!! The PeaceMaker RTA!!!This single coil flavor banger is sitting right at 25mm, making it the perfect rebuildable tank for the Double Barrel V3, or any...

Squid IndustriesPeaceMaker XL28mm /  Double Deck*MSRP $49.99You asked for it, we delivered!! The PeaceMaker RTA!!!This dual coil cloud chucker is sitting right at 28mm, making it the perfect rebuildable tank for the TAC 21, or any regulated mod that...

Don’t know about the xl but the 25mm (the one I want thanks to @SessionDrummer [damn him]) is out of stock. I found one at a site that I used to use a long time ago that quit shipping to AR when Arkansas passed their “we gotta have our fingers in your vape business” laws.

They show as in stock for me 27 stainless steel and 91 black. I put an Arkansas zip in and had a quote of $15 for shipping. Stock numbers are shown when you have made an account. You are right sir, I was looking at a PeaceMaker tank. Didn’t know they had a tank version, which I wouldn’t have wanted. TY I now have another rta order processing. Well evcigarettes dot com you just lost another sale, shouldn’t have let AR scare you so bad.