Sweeteners When , Why , What and Where to use

This thread was suggested by @Ianc13 and inspired by @KC111 question in another thread.
Sweeteners are used used for different reason and certain sweeteners are used in particular profiles based on what they are made with and what additives they contain. In this thread lets dive into which ones you use and why.

As someone who is not familiar with the various sweeteners, but have pretty much all of them, how do you know which sweetener to use with what flavor? I’m guessing that TPA is used mostly for fruit flavors?

Cap Super Sweet is used more for fruit because the additives in it make fruits pop more.

You will see FW sweetener used in bakeries , Purilium Super sweet is also a nice sweetener as well that doesnt contain Citic Acid .

FLV Sweetness is good in a lot of different profiles.

TPA Sweetener is a combo of sucralose and ethyl maltol . I avoid this sweetener the most because i avoid adding more EM to a mix if a flavor already contains it. Over the years instead of checking or trying ti remember where not to use TPA Sweetener i just eliminated it

As usual its all a preference

Which profiles would one use Purilum Super sweet in? Would you say Sweetness by FLV or SS Purilum is less of a coil gunker? What makes or why is FW ideal for bakeries? Which sweeteners contain citric acid? Thank you for this info. After I eat dinner, I will enter your info in my notes.

Ill PM you so we dont completely derail thread

Thank you, don’t see an envelope saying I have mail at the moment, but will look tomorrow.

When I first started mixing, I tried to use CAP SS to make my juice sweeter. The problem is I have issues with artificial sweeteners in foods, and in some concentrates so SS was not friendly towards me. I don’t generally use any sweetener at all now, my tastes have adapted to the inherent sweetness in the profiles I mix. I am interested in what others use and how they use them though as I am open to revisiting using them since I do have a sweet tooth at times…

As someone who is not familiar with the various sweeteners, but have pretty much all of them, how do you know which sweetener to use with what flavor? I’m guessing that TPA is used mostly for fruit flavors?

I think asking people what sweetener, and/or why will yield MANY different results, as everyone’s tastes are different, as well as tollerence/desire for different sweetness levels.

Although Fiddy mentioned EM in a fairly negative light, because of the very real MUTING effect it can have, I use it, and TPA’s Sweetener regularly with no ill effects.

SUC, i.e. Sucralose is a great sweetener, and it CAN yield the “Sugar Lips” effect if used high enough, and it almost always sweetens the ENTIRE MIX. It just encases everything in the sweet. BUT, can, and will gunk the hell out of your coils.

EM on the other hand, if used correctly can sweeten SOME aspects of a juice, almost like more of a targeted approach, and doesn’t really give the “Sugar Lips” effect. TPA’s Sweetener is a 50/50 mix of suc and em. I’ve had some fruits that just seem to work better with a EM/Suc mix. Again, if used CORRECTLY. Like fiddy mentioned, some flavors already have EM built in, like TPA’s Strawberry Ripe. Because TPA chose to use EM, basically is because it works well, most notably WITH fruits. Muting AND gunking can and will occur as your use increases.

Stevia can also be a REAL boost for fruits, and when using ACV (Apple Cider Vinegar), things can get even more exciting …

I am very picky about my ingredients, not so much so about percentages, eh? As per requests I thought I would make this short/simple post to make it easier in the future to locate, without searching deep inside of other threads. Ozo Stevia Stone Vegetable Glycerin 25ml - 30ml Pure organic stevia powder 1teaspoon - 2teaspoons With ACV & Lime juice (if preferred) Organic apple cider vinegar 5 - 10 drops Lime juice 5 - 10 drops I use ONLY the following brands (results from testing/ex…

Sugar Daddy uses a completely (kind of) different approach, and claims to (and does) have FAR LESS gunking then SUC.

I’ve had great luck with SUC as a general sweetener, bakeries, cereals, custards. EM or a SUC/EM mix for fruits. Stevia with ACV can work VERY good boosting fruits. Sugar Daddy for a kind of All In One Sweetener with less gunking, etc. 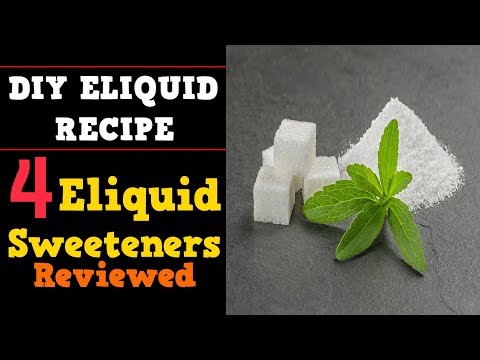 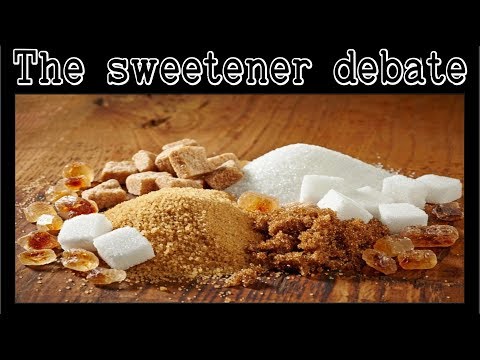 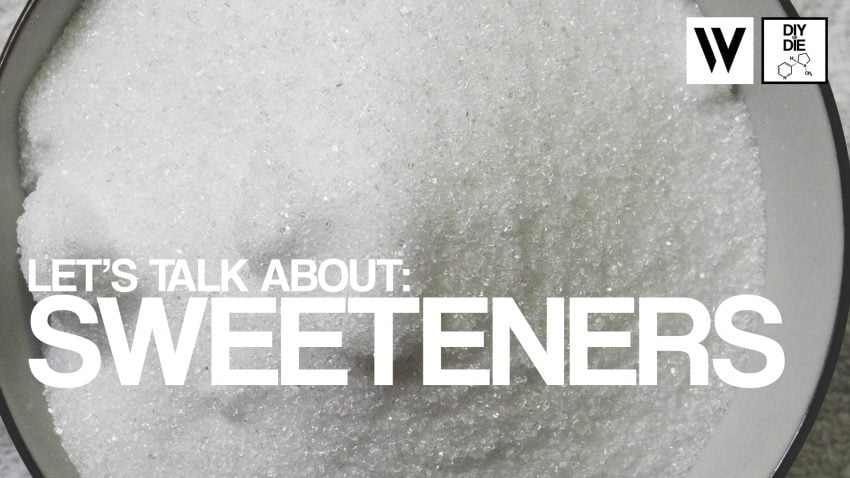 Sweeteners are some of the most important ingredients in DIY e-liquids. Here are some tips and tricks on how to use sucralose in your DIY e-liquid.

Sucralose (aka TFA/FW Sweetener, CAP Super Sweet, Sucralose 5 or 10%) is the most popular “enhancer” used by mixers. It’s the reason the juices on the shelves have that extremely sweet, sugary, feeling. That “sugar lips” feeling you get form some commercial juices, where it’s so sweet that when you lick your lips you can taste the sugar, that’s from a high amount of Sucralose. So if you’re after that commercial flavor, then you’re going to want to pick up some sucralose. The difference kind of sucraloses out there make things a bit confusing. TFA Sweetener is sucralose at 5% with Maltol at 5%. One ingredient in TFA Sweetener you may find detrimental is the amount of water content. Cap Super Sweet is sucralose at a 10% solution, that also contains preservatives and acids like Citric Acid. It’s the industry standard, and used in many, many commercially available e-liquids on the shelves. Flavor West Sweetener, according to their safety sheets, seem to suggest Sucralose at 30-40% of its weight. Much, much higher than the others, but without any other preservatives (and possibly 20% water content). And if you purchase plain sucralose that’s already diluted, then it’s usually at a 5-10%. In this video I talk about the best way to use sucralose and ways to not use sucralose so make sure to watch it to learn more.

UPDATE: I edited this article to reflect my thoughts on this compound, after more insight, and much more time using it.

Ethyl Maltol (aka EM, or Cotton Candy) is another extremely popular enhancer. This is often viewed as a sweetener, but that would not be correct. Ethyl Maltol, or EM, is actually just a cotton candy flavored aroma. Because this is an aroma, it doesn’t work on the sweetness receptors of tongue, and therefore not a sweetener. So don’t use it like a sweetener! Now, that’s not to say the flavoring isn’t “sweet”. It’s just that the sweetness comes from within, meaning it inherently sweetens aromas. If you think of Sucralose as dumping plain white sugar into something, then EM is using sweeter ingredients. It’s a great way to make certain flavors within a recipe SEEM to taste a bit sweeter, turning them into a more candy like aroma, as opposed to a fruit like aroma. Best used with non-citrus flavors like Strawberry, Blueberry, Mango. Ethyl Maltol can be purchased in a 10% solution, or as a Cotton Candy flavoring (like TFA/FW Cotton Candy ), or in a powder form where you can dilute them yourself. Just remember if you do, to do so in a 10% solution. One profile it works really well in is vanilla. Custards, creams, and bright vanillas benefit greatly from a bit of EM. Just don’t go overboard, and you’ll find your custards sweeter, without any distraction or astringency. If you need a sweetener that is very subtle and doesn’t actually affect your palate in any way, then this could be for you.

This is a newer sweetener that just hit the market. It’s a sweetener made from sugar-alcohols that works in the same way as Sucralose. But what makes this ingredient so excellent is that it extremely heat stable meaning it can last at much higher temps than Sucralose. This means that it won’t completely ruin your coils as fast as Sucralose does because sucralose has mass losses at a much lower temp, temps that we exceed when we vape. So this makes Erythritol a super effective sweetener for those who use tanks, or don’t change wicks often. This can be found at nudenicotine.com or ecigexpress.com and will be sold in a 5% solution. Use exactly as you would sucralose. 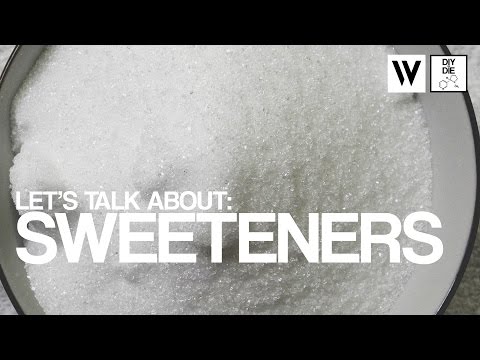 @KC111 also take note that layering can also lead to some great results. I’m still in the middle of my Duomei tests, and for a few of the flavors, they felt like they just needed to POP a little more, and I experimented, and put a drop or two of TPA Sweetener (5% EM/ 5% SUC), and sure enough. POP. As others will clearly mention, you can’t fix a bad juice with sweeteners (although commercial brands try and do this), but you should only use it/them to ENHANCE an already good juice, and/or add some “Pop and Sizzle”.

When there is money involved everything gets reinvented. That’s the synic in me.
It is an over saturated market. Munk fruit to Pyure.

I’ve used TPA and CAP in the past and didn’t care for either one. Super Sweet especially has chemical off-notes that I don’t like. They use crystal sucralose, citric acid, sodium benzoate and potassium sorbate…so there’s that psychological thing for me about inhaling preservatives.

I try to refrain from using sweeteners overall but when I do my choice is Flavorah. It just tastes cleaner to me and won’t gunk coils like others will.

Thank you for your detailed notes and answering my million plus 1 questions. I will look more thoroughly when I don’t have a pounding headache. Thank you SD and everyone else that puts up with this inquisitive ‘question box’, that was my nickname from my dad when I was growing up.

I think a handful of us Older Members stick around in hopes that we continue to get new memebers who we can help. So keep asking…

I’ve used TPA and CAP i

I dont like sweeteners either . I do find FW and Purilium SS dont have as much of that after taste others have. I started using Sweeteners after losing me taste from Covid . My taster has never veen the same . OH flv sweetness is descent as well .