Titanium Wire... Prep and Use

OK, gentlemen, I have done the deed(s)…
I followed the guidelines
I washed the wire, or should I say, I wiped down the 26g Ti wire from spider silk with rubbing alcohol and a lot of dark substance was left behind on the paper towel I used…no clue what that was…(isn’t spider silk supposed to be prewashed?)
I then built the coils, mounted them and then set the resistance…I proceeded to wick and then vape on said coils…flavor is, of course, increbible…now to find out if a strange flavor develops in my mouth…
Thanks to everyone who guided me through the proper steps…
I’m gonna make some juice now…

Hubby tried mine and of course wants the same experience. He has a Sigelei mini 30w, couldn’t I put TI in his subtank mini?

Here’s a update. From what I have been reading Ti wire will work with any application, for instance your husband’s Sigelei 30w, but the coils must be spaced. My coils are not and even though it appears it works in TC mode, certainly seems as though it does not when not in TC mode. Remember I was getting .1 ohm readings and Low Resistance protection kick in. Soooo, Ti should work if spaced, give it a try…

Thanks as always @ringling. I will give it a try this weekend. I just rebuilt his subtank but the resistance has gone way up for some reason and he can only use it at like 9 W, it has kanthal in it. I tried to put TI in my new TFV4. I have the single RBA deck and I can’t get one of the screws out to release my coil. I am scared to death I am going to strip it. Any tricks for getting this screw out?

Any tricks for getting this screw out?

Honestly this has not happened to me. The only thing I can think of is maybe running it under very hot water and then put it in the freezer for about 30 seconds or so. Being the screw is smaller than the base I’m thinking that maybe the screw will contract faster and thus loosening the screw a bit. It’s logical, but untested,

Ah, glad I spotted you mentioning the leaking on the RBA section of your Crown tank… I noticed that there are TWO O-rings on the RBA section of the Crown tank. One of them fell off when it arrived and I first opened it. Do you have two O-rings on your Crown RBA coil? Maybe that’s the problem causing your leaking. I haven’t tried the RBA coil on my Crown yet. Did you notice that it doesn’t screw in? It just goes into the slots? Are your slots in right?
Other than that… Because I’m a talker and I must get in on you guy’s conversation…LOL. I have a questions please… What box mod should I buy that will support Temp Control and Titanium and Stainless Steel wire? Also… Well another question… What Dripper has a huge deck and best flavor so I can do some of these crazy large builds you guys are doing? I’m horrible about taking photos when I should but… this morning I made a coil for my Fogger (and it fits) that is shaped like a vertical clover with 4 leaves and 4 wraps on each leaf. I used a Darice jewelry wire jig called a Link: http://www.bing.com/images/search?q=darice+thing-a-ma+jig&id=23A7AC4AC6DF35BCC390B76E919A7F489C1C97A4&FORM=IQFRBA It is Nicrome 28g. Ya because it is a vertical coil, there’s a lead going from the top along the side to the screw but it doesn’t touch. Came out as .3 ohms like I like it. I put two strips of cotton in it. Cool. Up one bunch of the clovers and down the other side and right to the juice wells and repeated to fill other 2 clover petals. Ok… I’m going to juice it up now… Hang on. Yummy, yummy 32 watts with Third World Custard. I’ll do it again and take a photo. I’ve never seen anything like it. Did it. Been wanting to make something unusual and good and I thought I’d try to replicate the TFV4. This has 4 coils but it’s all one wire. What do you think? Update a minute later… THIS is the best flavor I have ever got out of my Fogger!!! Rip trippers said the shorter the distance from the juice to your mouth the better. I figured vertical is best. Put this together and WAM!

My Experience with Titanium wire on the IPV4s mod.

I picked up an IPV4s ($60 on Gearbest). In regular power mode using kanthal it was perfect, but in temp control mode it was terrible, a really weak vape and it didn’t seem to matter what temp I set, the vape felt anemic. It wasn’t my builds which were solid, I also tried ni200 pre-built coils in a subtank mini, still no dice, I got the same weak vape. I had given up on temp control, but came back to it later for another try. Dual coil build using 24 awg titanium wire (0.5mm), 8 wraps per coil on a 3mm drill bit ohm out @ 0.18 on a Velocity dripper. I tested the resistance off the mod with an ohmeter, then made sure that the same resistance was locked-in on the mod at room temp. BINGO it works! The vape is warm & flavorful with lots of vapor production, titanium wire is easy to work with, a little more springy than kanthal but the big difference is it never dry hits, even when the wick is bone dry. I’m a convert. As for the IPV4s, no issues whatsoever using this mod in temp control mode.

Just thought I would revive this thread a little.

So today my IPV4/S arrived.

I charged my 25R’s all 4 that I’ve bought solely for this device. A1/A2 and B1/B2 they will be in rotation in the device and they will also switch sled positions after every charge and use.

So far I’ve ran about 2ml of juice through the coil and HOLY FCKING SHT @Pro_Vapes you were totally right!!!

I used some cleaning wet wipes on the wire and then some IPA to thoroughly clean the wire. @Whiterose0818 the amount of crap that came off this wire was insane.

The build got wicked and juiced and fired a little to help it bed in. Then I left it to settle for 20mins before reattaching it to the IPV4/S 0.378ohms resistance locked.

70joules and 500F is just magnificent.

Thanks again @Pro_Vapes you are certainly right once again.

@jondamon bows down to your knowledge of taste and vape apparel. 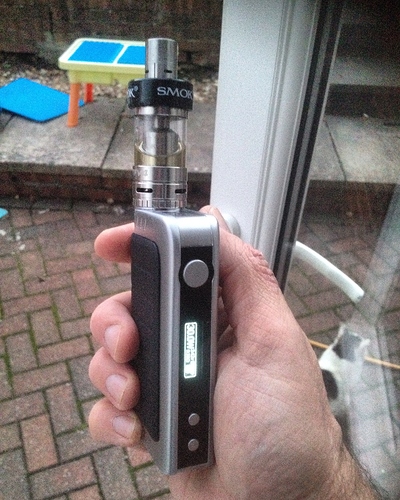 the amount of crap that came off this wire was insane.

Every time I prep my Ti-wire I am thinking this. I just rebuilt my Lemo 2 (it is actually excellent with Ti-wire!) - and wet a paper towel with vodka, then cleaned the hell out of it, and the paper was completely black where the wire had touched. It’s crazy. And then when you fire that build up… Ah, the taste. So great!

I couldn’t help myself 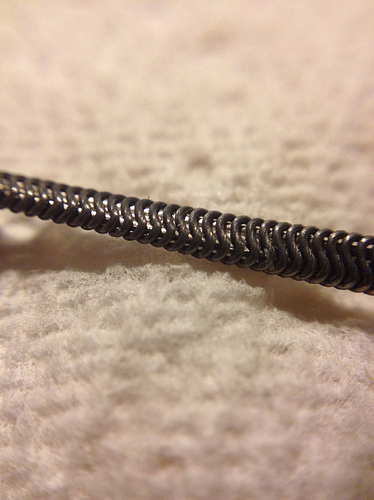 Oooh, I wonder how it vapes!

Coiled and pulsed lightly at 10w. 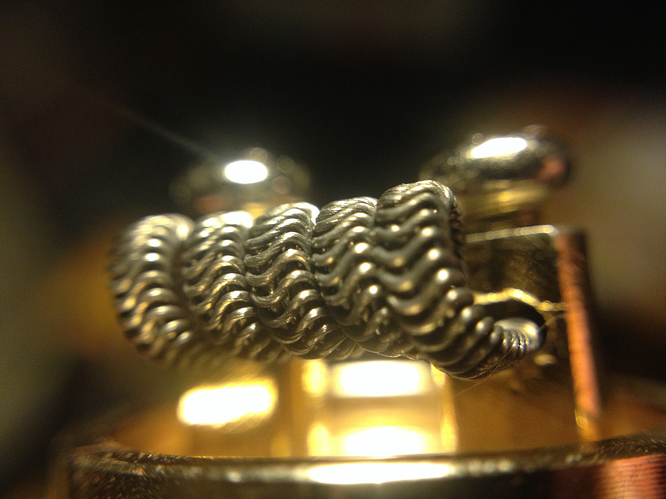 Just about to wick her up now and pulse her wet.

But initially locked at 0.089ohms.

And she still works in full TC 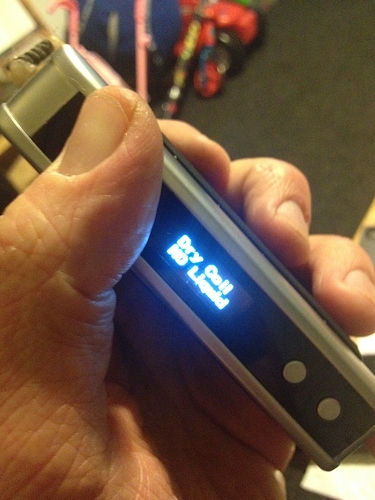 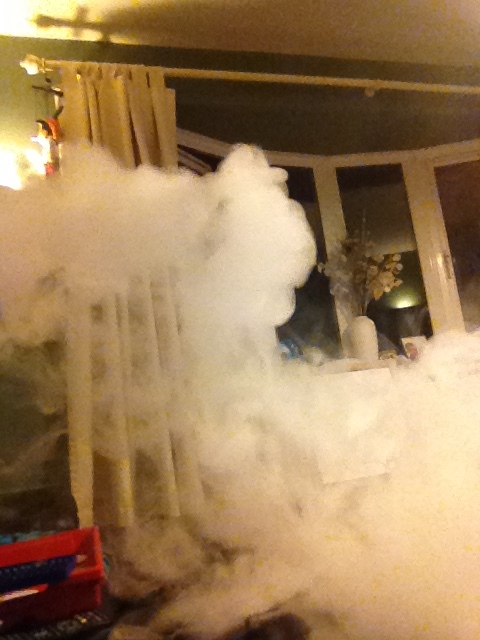 I’m surprised that TC still works on a claptoned build. I use to have issues with it continually jumping to power mode on my eVics. Good job CMJ. I’ll have to revisit clapton builds in TC.

I’m surprised that TC still works on a claptoned build. I use to have issues with it continually jumping to power mode on my eVics. Good job CMJ. I’ll have to revisit clapton builds in TC.

I haven’t done anything but a simple spaced wrap except for when I mistakenly tried a closed coil. It took me probably longer than most to get it right but with the dual RBA for the TFV4 I’ve found no need for anything else. It’s the most I’ve enjoyed vaping ever. But when I did make that closed coil and tried using on TC it got hot spots and was just nasty. That’s why this Clapton setup puzzles me.

Wiretheory got me trying this when I saw her 26g wrapped in 32g titanium alien wire.

I can’t explain why or how but it just works.

From what I’ve experienced it is an erratic resistance that causes the jump from TC mode to Watts mode. I’ll make an assumption or guess that your individual coils of your build are partulally shorted. And you fire them, a little oxide is being created at that hot spot and insulating that hot spot out this would cause your resistance to jump thus causing the Mod to change to watt mode from TC mode. From what I’ve read, its fine to dry fire titanium at very low wattage to a Blue color as long as NO white powder is formed on the surface. That blue helps insulate out hot spots and allows for a stable resistance. (Jury is still out on this and I avoid it myself) Imstead I wrap my Ti coils as contact coils and pull the coils apart a tiny bit to what you could call a micro spaced coil. After a dozen or so vape I’ll recheck the screws securing the coils to make sure they are tight. Because I also found out that loose screws also cause that jump from TC mode into watts mode.

I’ve only experienced it jumping from TC to VW on SS-coils - then I switch it to TC again, and then (or after one or two times more), it stays in TC…

What you mention sounds correct though - something makes the coil “unstable” for a while, creating too big resistance-fluctuations…

I see that now, Sorry, the dangers of replying to an old message without reading all the message first. Me bad, Oh well no harm no foul, right. 99% of the time when I get the jumping into watts mode from temp mode its because my screws securring the coils have loosened up a bit.