This will pertain specifically to the Vandy Vape Kylin RTA and the Geek Vape Ammit Dual Coil RTA. Of course if any other RTAs with similar deck designs come around it may help with them too.

Let me offer a disclaimer here. I only know how it’s helped me. I’ve not gotten any feedback from anyone else who has tried it so I can’t verify this truly works, only that I’ve had success.

What you do is once you’ve got your build made, and wicks inserted into the coils, you cut the cotton to the length you want, then rest a toothpick under those tails like so…

Next, tuck the wick tails into the juice slots by folding them over the toothpick.

Now, wet the tucked wicks as that will make them hold their form. Then gently remove the toothpick. If you do it correctly you’ll see a little daylight from the side where the toothpick was.

The goal is to keep the wicks from touching the part of the build deck where the bottom air flow is. Otherwise (my theory anyway) this allows juice to seep from your wicks and pool onto the deck, then make its way ever so gingerly down the air holes.

If you try this and it works for you, please leave a comment below. I know I can’t be the only one to have problems with this issue. And believe me, the vape off these RTAs is just too damn good to let a little seepage get in the way of the fun.

Nice trick bro! This may well go right up there with the spool tamer clapton trick! Going to give this a go the next time I rewick my rta!

I don’t use a tooth pick, but I also make sure that my cotton does not touch the bottom airflow. I also figured that if the cotton had contact, juice would slowly seep though the airflow.

Cool trick @SthrnMixer will be trying this on the mason dumptank that always seeps a little. Will let you know how it goes.

The goal is to keep the wicks from touching the part of the build deck where the bottom air flow is.

Nope. Not common enough, anyway. I’ve read a lot here on ELR and I’d never heard this before. Doesn’t mean much, but it does mean something. Good info to know, especially with a tank this good, to keep from giving up too quickly.

I did this with my Kylin earlier and so far it’s not seeping. I’ve run two 2ml tanks and so far the top of the mod is still dry. Fingers crossed.

That’s me. I have an uncanny grasp of the obvious. You got it all figured out.

That’s me. I have an uncanny grasp of the obvious. You got it all figured out.

Not sure what that’s supposed to mean so maybe I’m not understanding correctly. You referenced the Kylin build deck, which I’m familiar with because it’s similar to the Ammit Dual, which I have. But they aren’t mutually exclusive in terms of air flow concepts. And maybe this is where clarification is needed.

So besides having their AF holes centered on the deck how are they different from all the others with side locations?

I understand perfectly when someone tries to derail a thread. Good effort though…really nice try.

I understand perfectly when someone tries to derail a thread. Good effort though…really nice try.

It was not my intention nor would I ever try to derail this/any thread. There was nothing said here that would motivate me to do that. And after re-reading what I said it may have come off as sounding a bit condescending. If that’s how it was taken, I apologize.
So if I may, let me re-phrase my response…

It is my understanding and experience that caution is called for in terms of wicks touching anywhere close to the deck of ANY tank (not just the Kylin or Ammit Dual) designed with bottom AF holes. And I made the assumption that anyone that has used these types of tanks would know this. Is it safe to assume that your toothpick idea (which is very cool BTW) was for the benefit of those unfamiliar with that type of AF design? Or am I way out in the corn field somewhere?

I DID know that I should not have cotton hanging down my airflow with that style of tanks.

I DID NOT have a clever idea like the one with the toothpick.

And I am a fairly clever one usually.

So thanks for posting @SthrnMixer

I did not know this but will give it a try on my Kylin today. It needs new coils and wicking anyway. Thanks for the post.

Thanks for clearing it up. I did take it as condescending and basically a slap in the face. Good to know that wasn’t your intentions.

Common knowledge (or common sense, for that matter) is a misnomer. There’s not much common to it IMO. Yeah, most people who build should know the deal with wicks touching surfaces that have airflow, and I’d venture a guess that most do. However, this deck makes it rather difficult to see what’s happening with the underside of the wick once they’re tucked in. I feel like building a wider coil - one that extends out to or just past the edge of the deck - could mitigate the need to do anything further than simply tucking the tails. But look at this build - it’s my preferred one and it’s easy to see the wicks coming out of the coil ends have plenty of room to touch where they shouldn’t… 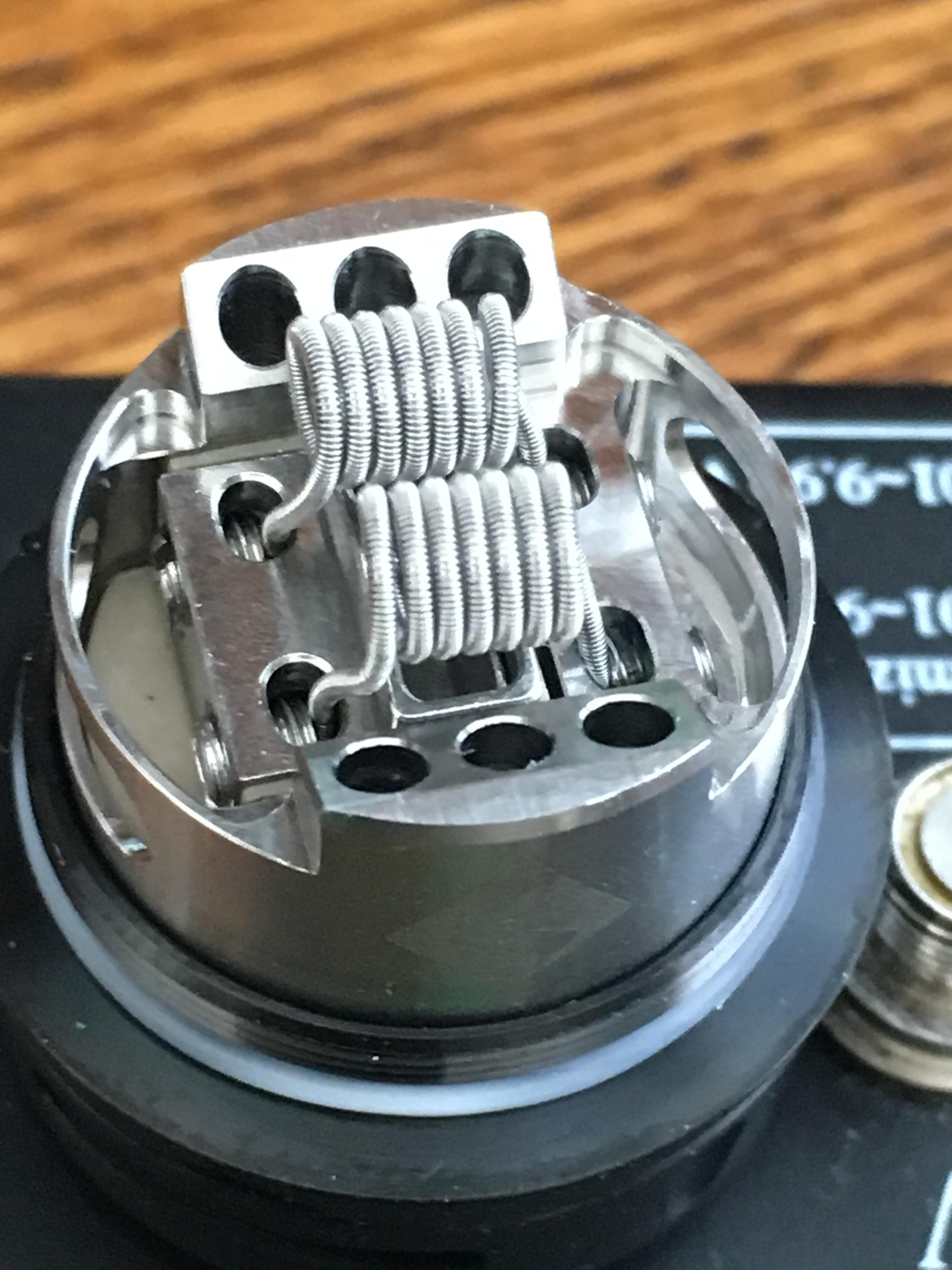 Maybe as I said if you built wider ones they would naturally keep the wicks from touching the deck. For this build though I wanted the number of windings I had so as to prevent a longer ramp up time. Looks groove to me. Although I try to keep the cotton away from the air intakes, it is often difficult for me to ensure I have done so. This looks like a very good method for me to try and I will do so. Yes, I have a few that slowly “seep” over time. I also like the fact that it creates a smoothed curve for the cotton as apposed to a sharp bend. That may not matter with the wicking of ejuice, but I know it effects the movement of liquids in other circumstances. Thanks for sharing!

I need to re-coil/wick my Ammit today, will try this. And I have a Kylin coming in the mail.

you want me to buy Toothpicks?! This vaping thing is gonna cost me a fortune!

Actually I “know” the cotton isn’t suppose to get close to the air holes but never really thought about anything else, never thought about the cotton being the cause of why I always have weeping issues with my tanks… just never dawned on me that is what might be causing it and just thought it was the “nature of the beast” and something I just had to deal with. I’ll be cracking my tanks (ya I know not a good term when talking about tanks), this eve and trying it (opening the cotton distance away from the decks). Thanks for pointing this out.

I always have weeping issues with my tanks… just never dawned on me that is what might be causing it and just thought it was the “nature of the beast” and something I just had to deal with.

And it may well be the nature of the beast…

@jojo tried this yesterday and got a bit of success, but then weeping again.
I did this on Wednesday of last week on my Ammit and all was good till today. Weeping again.

So I’m not sure why this would cause a slowing of the weeping, but it appears that may be all it does. I’ll have to try again and again, see if a patter develops.