Unauthorized use of VGOD trademark :P

So I got an email today: 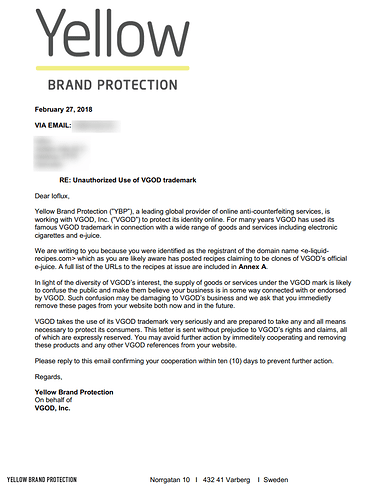 Along with a long list of URLs for recipes, discussion threads (even thread with vendors just selling VGOD equipment). They obviously scraped ELR and the forum for instances of VGOD (haha this thread will also show up I guess).

Currently considering how to phrase my reply to them

If they took any legal action, would they be on the right side?

I doubt it. The recipes claim to be clones/replicas of their recipes.

Lol, I would be a smart ass

To whom it may concern ,

I understand your concern, there are no products sold on this public community site, but since you don’t want the word vgod mention on this community site and receive free advertisement. We a telling our community that they should never mention vgod products ever on this site… or even suggest someone look at a vgod product …

Recipes with the name vgod in them, we have asked the creators of those recipes to change the name of there recipe.

Sincerely your,
Who cares who I am

Bunch of idiots trying to reach out… this is just stupid and I doubt they could pull this off. It’s just bullying daath with threads of the force of law. Could be costly for him and for what purpose?

Companies who behave like this just put me off of buying their products. It’s just nasty.

ELR is not a for-profit business. I’d tell them to go pound sand. But then again I have a nasty case of don’t give a crap. I was telling @Joel my guess is their lawyer said “we can send a C&D letter, but if they don’t heed it there’s really nothing we can do.”

The recipes claim to be clones/replicas of their recipes.

Furthermore, these recipes/clones are not for sale on ELR.

And they clearly indicate they’re not “the real deal” by mentioning they’re a CLONE!
If I google for VGOD e-liquid, I even have to scroll to page 7 to find the first result for this site… Who the hell ever browses to page 7 when they’re googling? lol

Actually I have used the same action in the past. With some legal advise on what I to do…

Next step could possibly contact the hosting provider if this server is hosted and shut the site down.

Public discussion, freedom of speech, you can say anything as long as you don’t profit from it…

The site is hosted in the Netherlands… I don’t think the American authorities will find the EU justice system to be quickly intimidated. This would probably have to be resolved in court before the server is shut down.

But all in all it’s @daath site. He has to decide what to do. And what actions to take if any…

Best advice I can say is

Cross that brand from my “to-buy” list.
Buncha butt-holes…

Great. Now I won’t by VGOD products or tide products despite how clean my shirt get.

Really don’t know anything about Vgod products other than , thx to this butthole action of theirs I won’t ever own a vgod product . If they ever mail me a free product it will be imediatly filed in file 13

They really f’d themselves by this petty BS! I’m interested to see how they are rated by morning, with the amount of 1 stars they already received since your post.

This is what happens when you attack the community you are supposed to be a part of and support. Idiots

I’m interested to see how they are rated by morning,