Unauthorized use of VGOD trademark :P

Their facebook rating is dropping faster than a meth hookers panties: https://www.facebook.com/pg/officialvgod/reviews/

Also @daath, I probably would not answer the request. As we say in France if you cannot afford to deliver with recorded delivery, you cannot be expected to be read. If you do, I would only answer after having contacted VGOD directly.

If you wish to answer the trademark enforcement contractor, it should ideally contain:

Their ratings have basically halved over night.

Along with a long list of URLs for recipes, discussion threads (even thread with vendors just selling VGOD equipment). They obviously scraped ELR and the forum for instances of VGOD (haha this thread will also show up I guess).

How long was that list of recipes? I only found 13 plus one titled V-v god or something which was on the front page and consists of 50% fuck you and 1% Wow.

Did they get private recipes by scraping? Can you counter threaten them for that?

Just gonna leave this here and congratulate Yellow Brand Protection, on protecting the VGOD brand, GOOD JOB GUYS and yes i do expect your highly advanced software to highlight this post when scraping this forum.

Let me quote your video “brand damage are significant even irreversible”, a shame that VGOD had to learn that the hard way using a company that was supposed to protect their brand.

I wonder if Yellow acted automatically or if they ran this by VGOD before sending out the threats. Either way, it’s an expensive lesson for them all to learn.

They obviously got it from scraping, because they didn’t read any of the links, as far as I can tell. 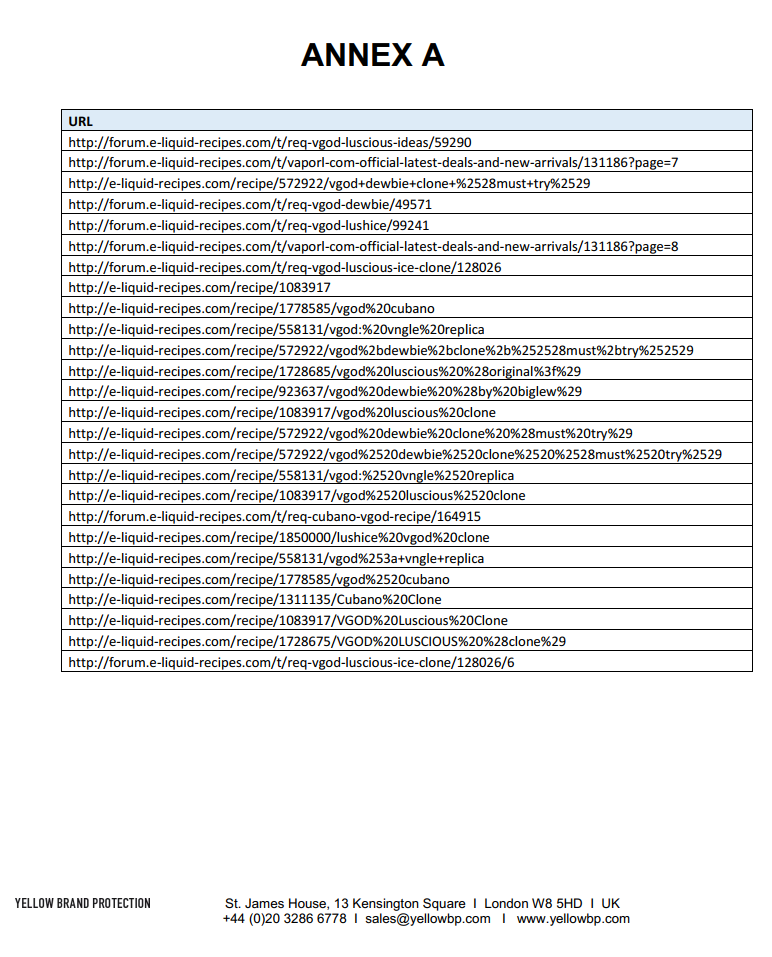 Just gonna leave this here and congratulate Yellow Brand Protection, on protecting the VGOD brand, GOOD JOB GUYS and yes i do expect your highly advanced software to highlight this post when scraping this forum.

Yep, it looks like they did the opposite of their job

You’ve got your own internet army @daath! We’re a feisty bunch.

You mad bro’??? In case you didn’t know. The DIY community is the tightest vaping community and likely the most aggressive. You just messed with the rebellion. Expect a huge waive of backlash and plenty of people targeting your product. This backlash won’t affect just your juice it affects your hardware and keep in mind DIY is international. I believe you have made a huge mistake targeting DIY.

You just messed with the rebellion.

We need a soundtrack from John Williams, lol.

We need a soundtrack from John Williams, lol.

Let’s start with this!

The reality is that yellow has probably been contracted on a broad mandate by the brand, and they have not expressedly asked elr to be targeted in particular.
The problem is the automated nature of yellow’s request as identified by @daath.
My money is on, the request is baseless and the company will think twice about using them again.
I would suggest press coverage, and have passed on pointers to do so to Lars as that would give adequate publicity to the standards of work of the contractor.

it’s an expensive lesson for them all to learn.

It’s almost always too late for the “Law” lesson that happened over this …the Law of Unintended Consequences. In business you pick your battles and sometimes you have to “Go to the Mattresses”, but this C&D doesn’t even fit any of the criteria they allegedly focus on in their Yellow Brand product description. Someone is going to end up in Court over this …Yellow Brand vs VGOD. A perfect example of the Natural Law described above …a “Lose Lose” proposition. You can’t fix stupid, but you can sue Stupids pants off. Way to blunder YB and VGOD! [gets popcorn bucket]

Look before you send a threatening letter.

I guess automated laziness didn’t pay off this time.

You can’t fix stupid, but you can sue Stupids pants off. Way to blunder YB and VGOD! [gets popcorn bucket]

One possible scenario is they, VGOD are tired of the manufacturers cloning their mods so they hire Yellow.
Yellow goes golfing but has the mail room intern google the words VGOD and clone. Yellow then sends C&D letters to anyone and everyone that has those words listed on their website before investigating?

I guess automated laziness didn’t pay off this time.

It probably took a few minutes to put that list and letter together and click send, but only less than 24 hours to take what might be a serious beating for it.

For a Company who proposes they can protect you from Chinese Intellectual Property theft, could the name “Yellow Brand Protection” be any more racially insensitive? tsk tsk Looks like they can’t even protect themselves. What a great reference for their next Customer! This is a real Resume Builder in their portfolio …DeRp

stopping at zero? At least these two geniuses in Mom’s basement have a crystal ball… well maybe after the Lawsuit they’ll be stopping at a negative number