Use Tips for the Game Changer

For those that use the GC homogenizer I thought I would post some parts I made for @Zippy at Flavor Chaser. Most are intended to DIY to assist with either handheld or use with a stand. Zippy purchased an inexpensive stand from Amazon and I made these parts that fit the upright rod.

This is a nylon ring with a nylon thumbscrew that slips over the tube where you can rest the generator on the bottle at a preset depth for handheld use. 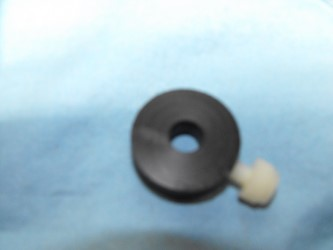 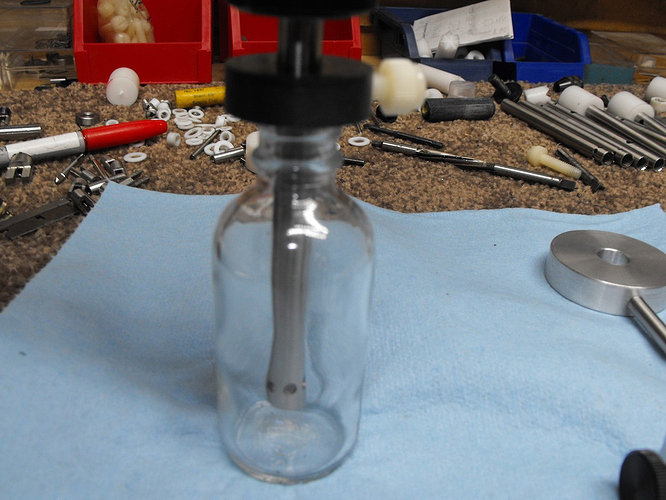 I also made a cross support pictured on the right that fits the upright rod and is used as a stand. 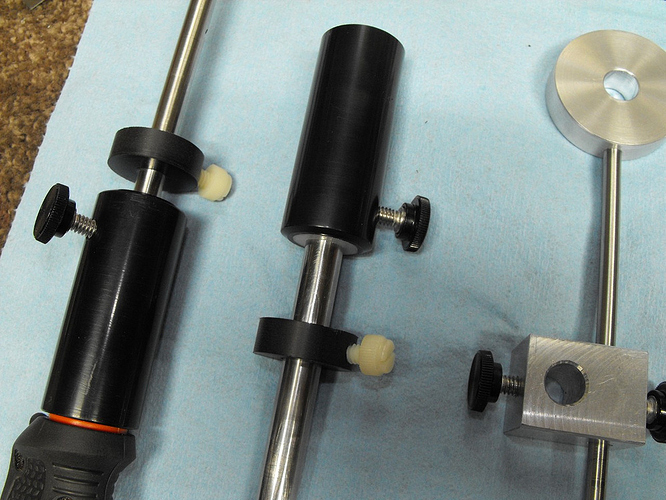 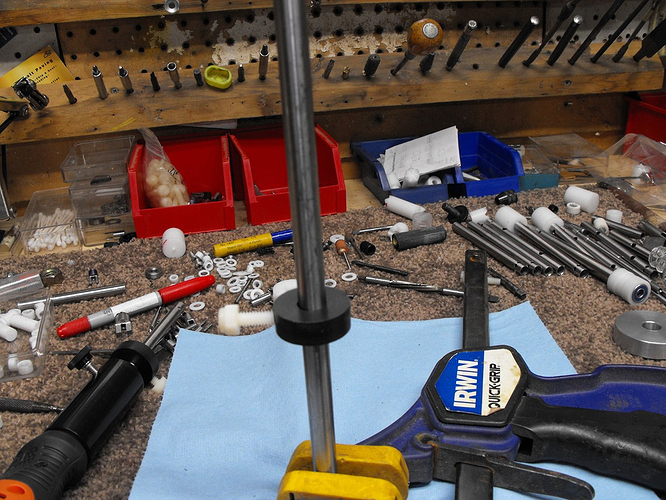 The disk on the support allows the user to insert the homogenizer tube at a preset height and lift up to place your bottle under or lift out to remove/clean etc. It works very well. By having a ring to set the height you can leave the cross support loose and just swing everything out of your way. 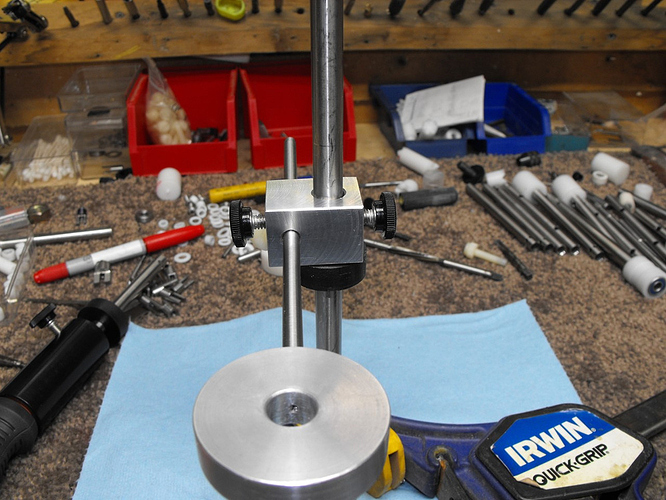 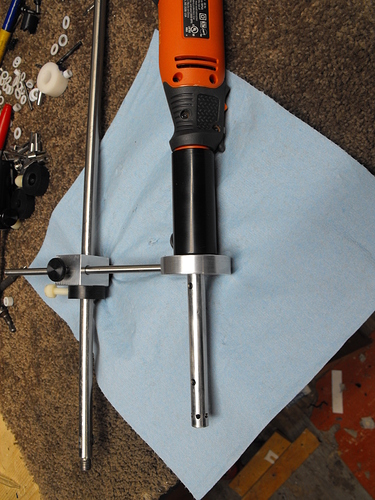 As time allows I will make set rings for everyone.

Something like this can be used to hold the GC or bottle, flask etc. 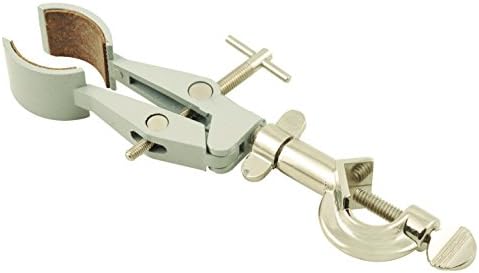 So, that Govt mule did have some giddyup this time huh. LOL 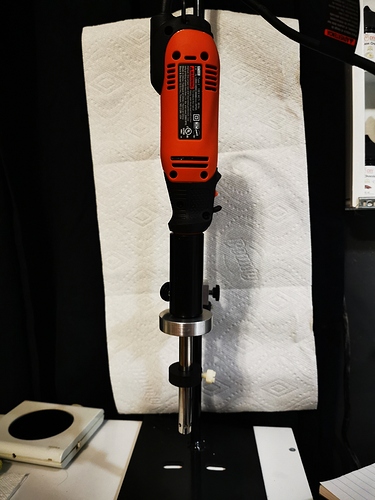 I’ll admit I’m lazy (see I said it) could someone explain to me the difference in a vortex mixer and this Game Changer (homogenizer) Sorry if the question has been raised before… very curious.

Hi.Thanks for asking. While I’ve written a ton at some other places, I haven’t here. I’m the designer and maker of the GC and I’ll try to summarize and also reference videos that show the process. From there I think the differences and the process will be pretty clear.

The GC is a high sheer type mixer which relies on a “rotor” turning at very high speeds within a stationary tube called a “stator.” A video will follow. This type of device was developed more than 70 years ago and are used across food, beverage, cosmetic, pharmaceutical, medical testing, lubricant and nearly all chemical processing needs. I have optimized the rotor/stator configuration for specific liquid/liquid mixing and have developed design features in my effort to reduce costs and at the same time provide a high quality device for DIY users. Typically this equipment tends to be very expensive.

Homogenization is a result produced by mechanical forces . This video by the industry leader explains the homogenization process very well. Please note that at 46 second the video demonstrates that flavor emulsions (flavor bases) are made by high pressure hydraulic devices.

The next video demonstrates how high shear mixers work and also shows how conventional agitators and stirrers can not produce the same results. Heavier materials are forced to the outside of mixing vessels by centrifugal force with the conventional mixers.

Note how the liquids are pulled up into the mix chamber and then dispersed through the stator ports (holes). Along with the “shearing” action hydraulic pressure, though not as intense as the piston type above, and cavitation effects combine to produce vigorous mixing action and homogeneous result which as many, many have attested to produces a vape ready product. Days, weeks, or months are eliminated.

I’ll be happy to expand upon what is occurring to produce this result and also be happy to answer any and all questions.

These are great articles. and very helpful And informative. Thank you

Thank you so much for this detailed explanation. I’m going through the videos now.

I wasn’t sure whether to start a new topic or post here as the content is relatively related.
I was commenting to a new mixer why he should not use a mixer/frother etc when mixing e-liquid relative to the air bubbles effect on nic and flavoring. His rebuttal is below and I’m curious how you would comment on his rebuttal…

How do you think large batches for liquid companies get made? Usually a big chemistry-lab level over-head stir unit, with metal pedals whipping it around. Its not injected with air, but just happens from all the mixing. Oxygen+Nicotine=steep so it should only start the steeping process and have little to no effect otherwise once the bubbles are gone.

Well, I guess no one knows better than you what a futile effort things can be from your experience with the flavor conventions.

Try to help, explain why, and get nonsense and insults. Sometimes it’s not worth the trouble. If they are not willing to consider that their assumptions could be incorrect and/or offer some supporting facts for their arguments then you wind up shaking your head.

Where I try to start is by attempting to make sure that people know what homogenization is and what equipment is used to achieve a homogeneous mix. Silverson https://www.silverson.com/us/products/?wvideo=dv7o6fh79g is likely the world leader in high shear equipment and have a ton of short video’s that explain the processes and the equipment used for a multitude of processes. This includes closed system equipment where the possibility of aerating a mix is completely eliminated. Several video’s demonstrate that “conventional agitators” (stirrers) will not produce a homogeneous product and visually show why.

His statement is very likely incorrect.

What he is likely seeing are large commercial high shear mixers. I’ve referenced a tour of the Flavourart facility and was able to spot their high sheer equipment in huge batch tanks. Most would assume that they are stirrers. Nope.

Then there is his declaration that

Oxygen+Nicotine=steep so it should only start the steeping process

We all take extreme measures to keep our nic in freezers and some even use argon to keep oxygen away from it to prevent oxidation. I’ve quoted Flavorah so many times its committed to memory though I was saying this long before they did publicly:

“much of what has become known as the “steeping” process by ejuice
makers is actually accelerated oxidation of the flavorings caused by
the addition of freebase nicotine……If nicotine is not added, this
undesirable oxidation does not occur and the initial flavoring
profile of the recipe will be maintained more consistently over time.”

So brother its a tough one to tackle. I’ve had such extreme resistance that I’ve tried to just let it lie. I now have well over 100 mixers using the GC and have honestly had some of the nicest comments I could have ever imagined.

Everyone knows @woftam . Simon makes a lot of juice and has some really nice overhead stirrers. I don’t think he would mind me saying that I introduced him to high shear mixing with the GC. He has since moved up to commercial sized high shear mixing equipment, some of which came from me. So this individual could read about Simon’s experience or for that matter, many other highly respected mixers.

I get what you’re saying. I’m starting to think it’s not worth the headache replying to this guy though. I just cringe when people like him promote their steeping methods in their notes which, in turn propagates (what I believe to be) mis-information.

Yeah that’s what it looked like to me, like he wanted to tell you instead of asking or maybe learning something. I remember when @SmilingOgre did the first review and posted it on YouTube. First or second comment was how “everybody knows you can’t heat VG, ask a chemist”

and others that “you can’t” etc etc. Walt wisely just ignored them.

Does anyone have good tips on using the GC with 10ml SFTs?
I have the smaller size and it seems to fit in my 10ml glass bottles but it’s a close call if you know what I mean. 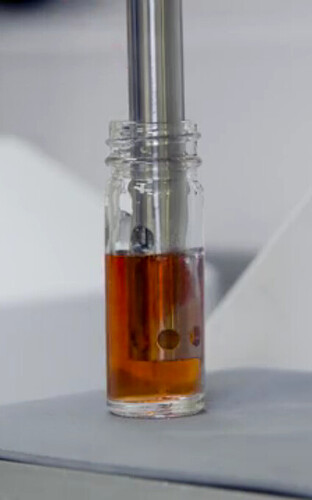