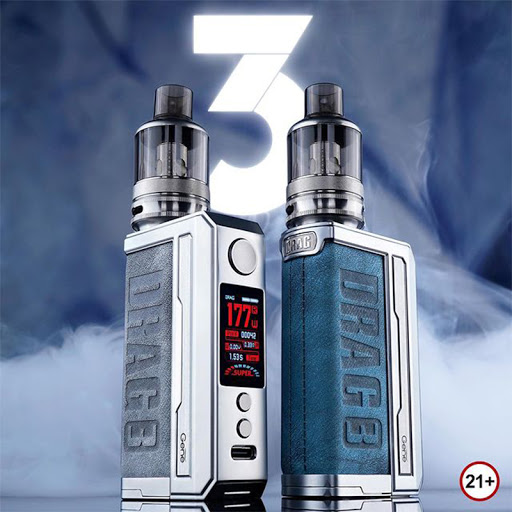 This kit was sent to my by Health Cabin for the purpose of this review. If you’ve never been to their store, check it out some time. They always have some great deals going on. Here’s the link to the Drag 3 kit at Health Cabin: VOOPOO Drag 3 Kit 177W With TPP Tank 5.5ml
The prices lower when you sign into your account there usually.

Voopoo has been around a while but I’ve never really tried any of their products. I don’t know why, because they seem pretty popular. I recently got my first ever Voopoo mod which is the Alpha One. I haven’t even used that one much. They’ve been releasing a lot of stuff recently. There’s so much of it it’s hard to keep track. They use a lot of the same names like Drag, Argus, ect. The original Drag mod is the one that put them on the map. This is the Drag 3 but there’s been many versions before it.

The mod is capable of firing from 5-177W. It comes with a plastic pod styled tank but the base has a regular 510 connector. They’ve (I hate this term for vaping) “Upgraded” the coils this time. The ones for this kit are the same style as their really popular PnP coils, only a bit larger. It’s like they took a PnP coil and blew it up 30% or whatever. They’re called TPP coils.

What you get with this kit:

I got the all black Drag 3. Historically, Voopoo’s black colored Drag mods are notorious for fading. The black coloring eventually rubbed right off of them for a lot of people. Time will tell for this one though. Im not sure if they’ve improved their coloring process.

The mod is almost styled like C frame but it has a hinged battery door on the bottom. It reminds me of a modern Charon 218… It consists of a metal frame, but there’s a leather section. It’s nothing new, most companies seem to be doing this recently. It feels great in the hand. It’s about the perfect weight also, not to heavy or not too light.

There’s a bit of branding on on this mod. One side of the leather has DRAG 3 in large letter. The other side has a smaller Voopoo logo. It says Gene on one side of the metal. There’s also a Drag sort of badge looking thing directly under where the tank sits. The 510 connector is the only stainless steel part of this mod. It looks to be about 22mm round and is raised ever so slightly. It’s anchored down by two small hex head grub screws.

The screen and buttons are all grouped together on one side. It’s powered by the Voopoo Gene Fan chip (Mine says V. 3.0). There’s two main display options. The default is an upright display called Iron. Pressing and holding the up and down buttons at the same time allows you to choose between screen display options. The other option is called “Core” which turns the display sideways.

There’s 3 main modes to choose from. S : is Smart mode. It reads your resistance and estimates a power level for you automatically. The screen is Yellow in this mode.

R : is RBA mode. This is just regular wattage mode from 5-177W. The screen turns blue

Super : They claim when your resistance is between .1Ω-.3Ω and you’re above 80W, it fires super fast and hard. The screen turns red above 80W. That’s when Super mode kicks in apparently.

I mainly use the mod in RBA mode. I like to adjust my own wattage. Automatic settings aren’t good for the way I break in coils. I start low and work my way up. I’ve never used the mod above 80W so no super mode for me. It fires fast but doesn’t seem to hit as hard as my Alpha One which has the same chip as the OG Drag. This is based on using them both at 50W. The Drag 3 at 55W felt about the same as the Alpha One at 50. No big deal, but thought it was worth a mention. If you use TC, this mod won’t be for you.

It’s got a USB-C update/charging port. The buttons are nice. If describe them as being clicky, but soft clicky. The battery door is hinged. It opens nicely but it’s kind of stiff. To get it fully open, it has to like click into place. Not a big deal, just my observation.

The tank part is made of plastic and holds 5.5ml of liquid. It can be broke in half. The base is metal and has an airflow control ring. The top part is styled like a pod. You push the coil in and pull it out. There’s no threading to worry about. It’s a bottom fill tank. There’s a fill hole under a rubber plug. To fill it again, you just pull the top part off, and fill it upside down. The whole tank is held together by a strong magnetic ring. It’s stays secure pretty much. The tank doesn’t come apart unless you want it to.

The drip tip is the same color and material as the tank which is dark see-through. It’s 810 styled with o rings. Being clear, you can always see the condensation or wetness. That kind of drip tip has always kind of grossed me out but whatever. It’s a comfortable tank and drip tip to put my mouth on.

The base of the tank can use pods that cater to the smaller PnP coils. It’s an interchangeable base is what I’m getting at.

Like I said before, these coils look like the popular pod mod coils only bigger. You get two different styles with this kit. They’re not your typical mesh coils. Voopoo has decided to solder a third leg onto the actual mesh part of the coil. The positive connection runs right through the center of the mesh grid. Both ends of the mesh have their own leg which is negative. This process is supposed to make one mesh sheet act like two separate ones. Vapefly has been posting that Voopoo stole this idea. I wonder how? Corporate espionage? A Vapefly employee has been trying to create a ruckus on Reddit but people seem to think it’s not a big deal. Mesh fires fast as hell without a third leg. I just saw a rebuildable mesh coil from Wotofo. That’s more of a Vapefly ripoff in my opinion. It like the exact same thing as the Kriemheld RBA only for pod coils. Enough about that, I’m getting off topic…

I started with the other coil because I like to vape at 50W. I’m currently vaping with this coil as I type this. This coil is better than I expected it to be. These give off some pretty damned good flavor. I think companies are really starting to master this whole mesh coil thing. It fires almost immediately at 65W and produces an okay amount of vapor. I’ve always been partial to traditional subohm tank coils but these pod styled ones are getting better and better.

I used this coil primarily right at 50W. This coil produced really good flavor for a while. After the third fill which is approximately after 15ml the flavor started tasting burnt. That’s fast. You should be able to use more than that. I never let it run low on liquid or hit it in cold temperatures, ect. I don’t understand how this went downhill so fast. The liquid I used is called Pachamama Fuji Apple. I think that brand uses a lot of sweetener. I inspected the coil and the cotton was turning dark but the mesh coil had no crud on it. There was no gunking. The wicking was failing which is weird to me. I was liking it though.

I probably wouldn’t have bought this kit. I’m glad that Health Cabin sent it to me though. The mod is very basic in functionality but I like it. I usually set my wattage and vape away. It’s a pretty alright alright mod. The 510 connector is secure, and the whole mod feels really great in the hand. I wish I’d had gotten an Argus GT to compare. People have commented on the similarities.

The tank in this kit is unconventional but it works. I didn’t have any leakage or anything like that. The coils put out some solid flavor. I was impressed. Like I said, not sure what happened with my .2Ω coil. I don’t think I did anything out of the ordinary but it very well could’ve been my fault. Sometimes I take a big hit when it’s cold and the cotton gets burnt. That burnt flavor lingers.

If you like Voopoo products, you’ll probably like this. It seems like it’s constructed solidly and it really is nice to hold. I keep bringing that up but it really is. There’s one thing that bugs me about the mod. It goes into some kind of rest mode when you haven’t hit it in a while. I pick it up and try to vape but the first fire press doesn’t fire the tank. It sort of wakes up the mod. The second fire press works. I’ve learned to not look at the screen or try figure out what’s going on when this happens. I just push the fire button again.

Big thanks to Health Cabin for sending this my way. I enjoy using it. If you guys have any questions I’ll try my best to answer.

Can you believe I have never owned nor vaped on a @VOOPOOTech device. After what they pulled here on the forum I never will.

After what they pulled here on the forum I never will.

If memory serves they were advertising an atomizer or something with new “secret” coil material. When I asked the rep what the material was, they refused to say…so a couple of us decided to shit list Voopoo products.

That and the whole Tony B.- Pulse fiasco.

Nice review man. Keep it up.

Watch this one, if you’re only going to watch one. 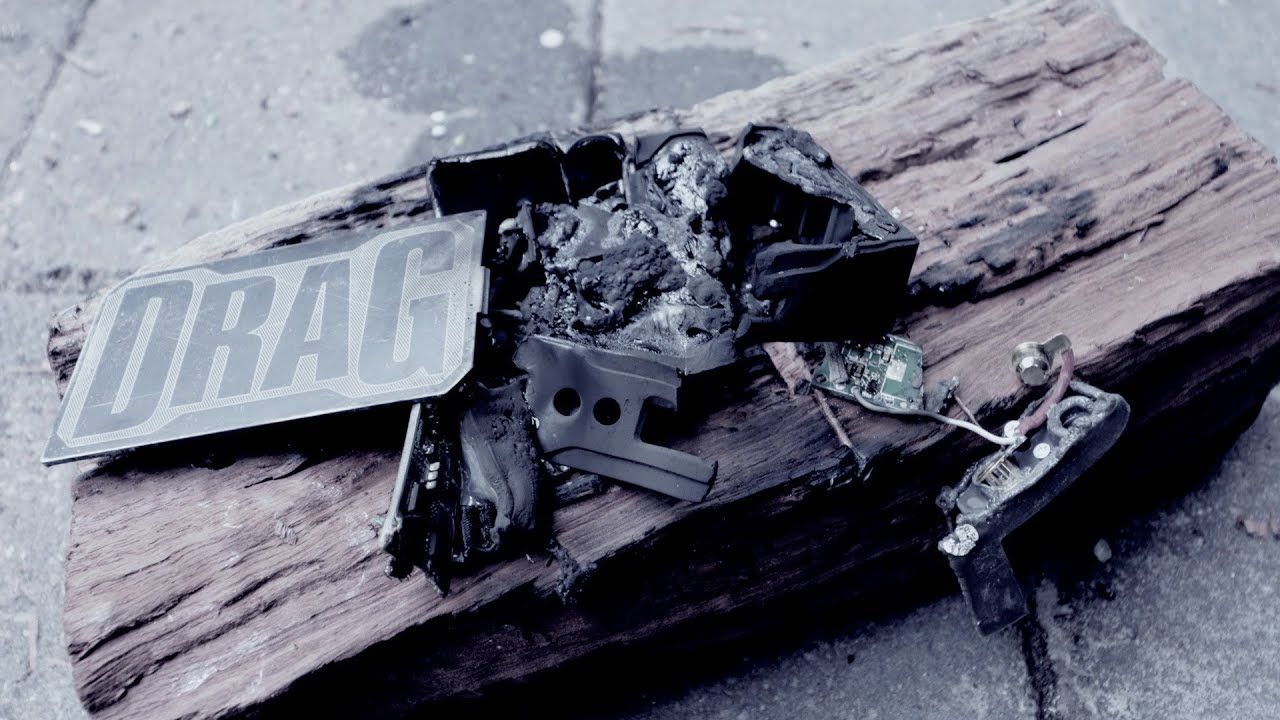 VooPoo Leave A Bad Smell After "Shady" Squonk "Deal" With Vandy Vape and Tony B Falls Through. What's happened? We take a look at the ins and outs of #BoycottVoopoo. 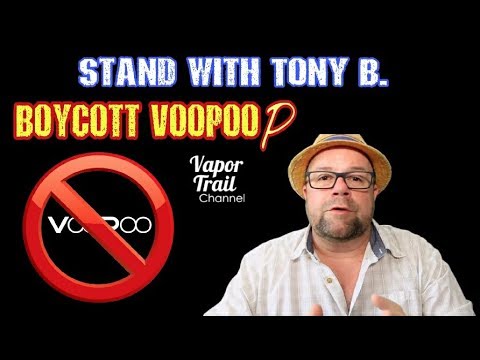 They came over to the forum and were “giving away” some product then they decided that whoever gets it has to do a review then they started harassing the people that got one so they all got together and did ONE review but they all worked on it.

Seize the chance, Total 250 testers will be chosen ( via all VOOPOO social media)

⠀ 4 testers will draw here. [image] image.jpg584x590 131 KB How to enter👇⠀ Must be of legal age of vaping Comment below with your thoughts for the New Drag 2/Mini Most importantly: Make sure you’ll post review on ELR before Oct.31th, Or in 1 week after receiving the product. .⠀ 4 Testers will draw here on Oct…

Greetings everyone. Just wanted to take a moment to let everyone know that the people selected by VooPoo to post reviews (@adary, @Cosmic, @Laura5, @SunnyT, @Vaporraven, and myself) on the new Drag Mini, and Drag 2, have collectively agreed to post (submit) our individual impressions of the equipment we were sent under a single, unified post so as to: A. Not have multiple threads spamming the ELR community in short order on basically the same item from a single vendor. B. This is also being do…

I understand this happened years ago and I’m sorry I posted this in your thread but @VOOPOOTech can go F themselves. I’ll keep it alive because I don’t want to forget the shit they pulled and I don’t care what happened to tony b I care what happens at ELR

thanx for the info guys