What is the Best Pumpkin Spice Flavor?

I am trying to create another recipe for a friend with a rich pumpkin pie flavor. I think it needs cinnamon as well to kick the taste buds a little. I just tried a mix using Capella’s Pumpkin Pie (Spice). It hasn’t steeped but a day yet, but I have been vaping it all day to really get the flavor of it. I am getting more of a raw pumpkin flavor than I am a pumpkin pie.

Charlie Noble has a liquid called Mayflower. It is very rich and tastes like a delicious pumpkin pie with whipped cream on top even. It also has a pretty strong cinnamon note to it. My friend was wanting me to make him a flavor like that with my Twixted recipe as the base.

I know the recipe I just made needs to steep. And I am sure it will become richer. But if there is a better way to go about this I want to get the flavors ordered and get them steeping as soon as I can. I plan to make him a Christmas basket of vaping goodies and I wanted to have this ready. I thought I was going to be good ordering TFA’s Pumpkin Spice, Capella’s Pumpkin Pie Spice, and a few pumpkin flavors (just in case).

Is there anything out there that will deliver a rich pumpkin pie flavor? Surely there has to be if Charlie Noble can do it. Can someone point me in the right direction? Maybe try adding some custard to my recipe here?

I added one drop of Flavorah Rich Cinnamon per one of the tasting notes you posted. I then went back awhile ago and added a second drop.

Apple pie? Really? Apple and Pumpkin. Hmm. I might have to try that.

Apple Pie is comparable to Pie Crust (TPA), although it does have some apple notes…

The bold words are very good commonly paired flavors that go with apple on this list and Pumpkin is a bold one ! I thought it was interesting too ! 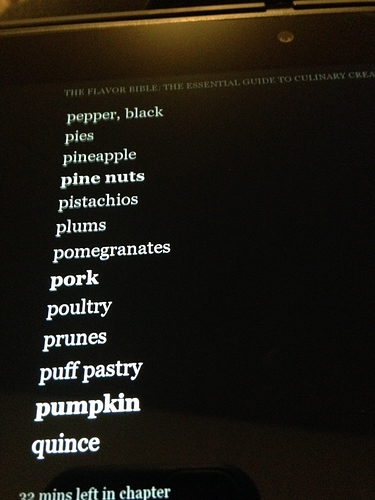 I gotta get that book.

The thing is though, I am trying to richen the flavor. Not really add more things to it. I have TFA Pumpkin Spice. I will try that one next. But after reading flavor notes and recipes it seemed neither the Capella or the TFA were very good. So that led to this thread. I am looking for a baked pumpkin pie flavoring. And I don’t see anything out there to create this.

But I am definitely going to try some apple pie with a pumpkin recipe. It sounds delicious the more I think about it!

Thanks guys. Keep the comments coming!

Crap, I know what I am missing. I meant to change the cookie in the recipe to Cheesecake Graham Crust. I spaced it lol. I will try that and teport back.

I am interested to hear how this goes. I have been looking for a pumpkin pie kind of flavor for awhile. Nude Nicotine has a flavor called Pumpkin Velvet that sounds like it would be really good.

I am still working on this but will report back. If you have a local vape shop that sells Chalie Noble liquid I HIGHLY suggest you try Mayflower. That is what I am after. It flies off the shelf at our local vape shop and is probably my all time favorite liquid. But it’s pricey. I went through 30ml in a day. Smoking was cheaper lol. It’s just that good.

Mayflower is/was tasty. They had a 50% off black friday sale. Almost picked up a 120ml bottle. May have to see if that’s ended.

You have any thoughts on how to clone it?

Nope but it’s in my top 5 flavors that I would like to.

I had thought it was pumkin spice, marshmallow, cinnamon (lots of cinnamon), graham crust, and a whipped cream. But I haven’t even came close yet.

So now I am thinking there may be some cinnamon danish in it. What I mixed wasn’t rich at all. But it hasn’t steeped either. So there’s that.

I am going to go right now and mix up a recipe using TFA’s Pumpkin Spice. Maybe that will be better.

I did find a clone online a few days ago. i’ll pm you a copy when i find it. I know i screens hotted it. It did use can danish if i recall correctly

Sent, let me know what you think.

Thanks. @SunnyT has a Pumkin Pie recipe that looked right along the lines of what I was thinking. But I spiced it up a bit to try to make it richer. It may turn out really bad. But here’s what I just mixed…

I edited this. I doubled the Rich Cinnamon and lowered the Pumpkin Spice to 3%. I made another batch and played with the percentages and added to my first bottle to bring the Pumpkin Spice down to 3% (roughly). This will be my next mix. This is very yummy already so I can’t wait to see how it steeps.

Hi there, sweetened condensed milk adds sweetness and body to home made pumpkin pie filling. I have not played with the condensed milk flavoring yet.
I have some pie spice flavoring burning a hole in my pocket too. Interested to see what you come up with!

Yeah, I haven’t tried that one either. I think the Custard in this is taking it’s place. I think after doing a little more research I may have gone overboard on the Pumpkin Spice flavor. I will do a tasting today and see. If nothing else I will double the recipe and put it back down to 2%

Ok, the recipe I posted above - I just put a little in my TFV4 with the Quad coil. I am using that because that is what I have been vaping some Charlie Noble Mayflower in. This flavor is pretty close I think. I might have a tad bit of Vapor’s tongue though from vaping 20 different things the past few days. I think after this steeps it’s going to be really good. If the richness comes out in the steep it’s going to be a winner in my book. Thanks @SunnyT for sharing her Pumpkin Pie w/Graham Crust Recipe to get me pointed in the right direction!

Hi @LordVapor I am glad to help…I really like the adaptation you made but I will tell you that I started the pumpkin spice at 4% and it was way to overpowering after steeping. I had to take it down to 2.5%. Best of luck and I will be ordering some condensed milk on my next order so I will be replacing the vanilla custard with it to see if it comes out a little sweeter. But all in all it is a great pumpkin pie and I must say that yours looks delish!