I got alot of concentrates today im not complaining at all but alot I will probably not be able to use in even 5 years. Like 120mls of Pistachio TFA and 120mls of vanilla bean gelato I believe also TFA these 2 i don’t think have been opened.but the ones im worrying about are the ones that say (clear) but are black as oil on brown and even shaken alot they have the starting of an off smell to them some smell like cardboard. How do you know 100percent that its no good without vaping a 10ml bottle of an more than likely no good concentrate? And how should I store these ones that I don’t use often but know I don’t need a 120mls like this Pistachio out.

Flavors tend to degrade, kind of like my mind, a little bit at a time. It’s possible that they could just go bad overnight, like my second ex-wife, but probably not likely.

As for the large amounts, remember they’re food flavorings. Maybe your cat would like pistachio tuna for a change.

could just go bad overnight, like my second ex-wife

I feel this one, pretty hard, only reverse the gender roles…

Sounds like my engagement lol. Luckily the knot wasn’t tied yet!

I feel this one, pretty hard, only reverse the gender roles…

Want to know why I’ve been married three times?

You know what they say, “third time’s a charm”.

I’m on #3 myself. Just not married. Just hit 5 years in June. This one listens and shows emotions other than anger and hatred.

Congratulations on your success with #3. May you have many more happy years together!

How Common is Divorce and What are the Reasons? | Your Divorce Questions

Researchers estimate that 40%-50% of all first marriages will end in divorce. Researchers have determined certain factors that put people at higher risk for divorce:

hmmmm. guess i can blame my parents and my ex’s parents for getting divorced

@ladycrooks I have over 1,000 and many are very old. I have yet to throw a single one away due to age. Light, heat, and oxygen are the enemies, just like our NIC. Minimize those 3 as much as you can. You can also break down big bottles into smaller bottles, to prevent over exposing one larger bottle/flavor.

(clear) but are black as oil on brown and even shaken alot they have the starting of an off smell to them some smell like cardboard.

I have found some to be like that regardless of age, and that smell can be inherent in some flavours too.

As @SessionDrummer asked, which actual flavours are you talking about?

…well I had an quiestion about capsium about 30mins ago but I don’t have all day to look for the "proper " place to ask a quiestion for to be this obsessed over other ppls opinions. Cuz “wolves don’t lose sleep over the opinions of sheep!”

Like 120mls of Pistachio TFA and 120mls of vanilla bean gelato

Had you previously used those flavors and just fell madly in love with them? I’m just trying to understand your reasoning for ordering such large amounts…given that you’re still new to all this.

She didn’t order the pistachio lol. I sent it to her out of the bunch sent to me from @Tracy8.

i still have no idea what I am going to do with alot of them. for now since alot of the big bottles are already opened a few arent but i will probably take 20 or 30 mls out and fridge the rest? I did alright all I paid was about 70 and it was for shipping and the exchange rate for 54.00 us I had to pay about 70 cad. 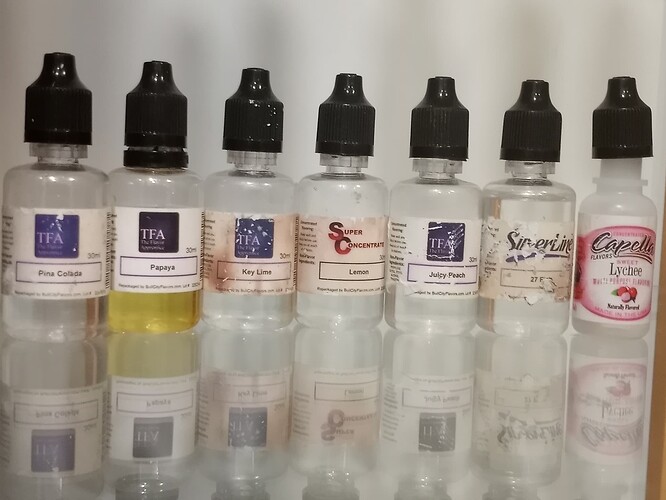 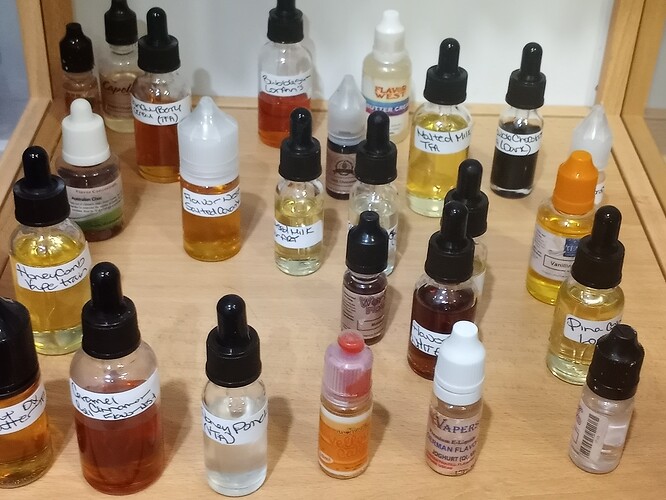 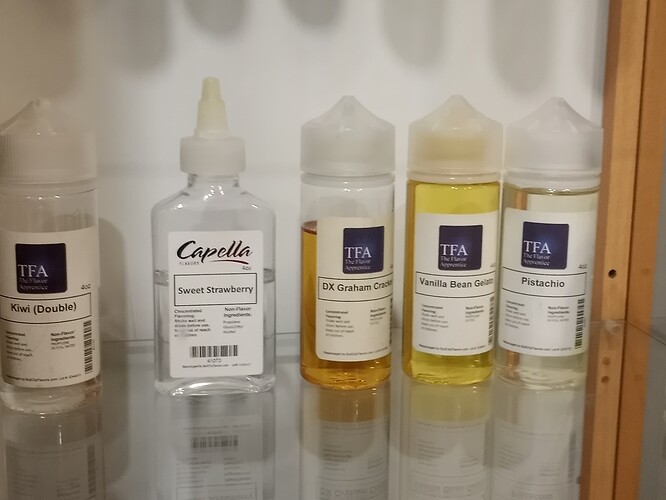 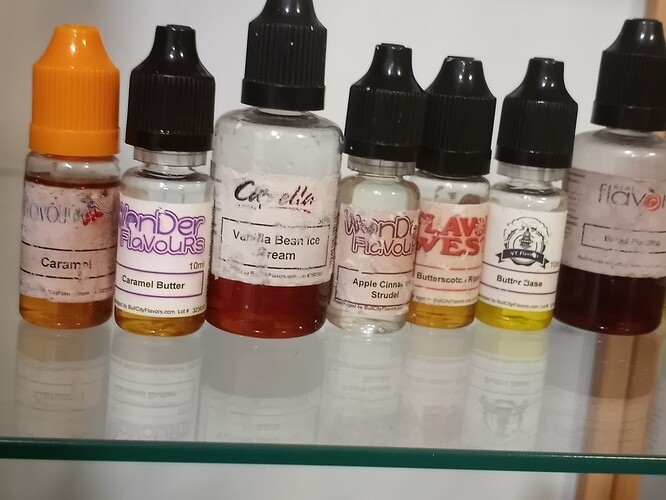 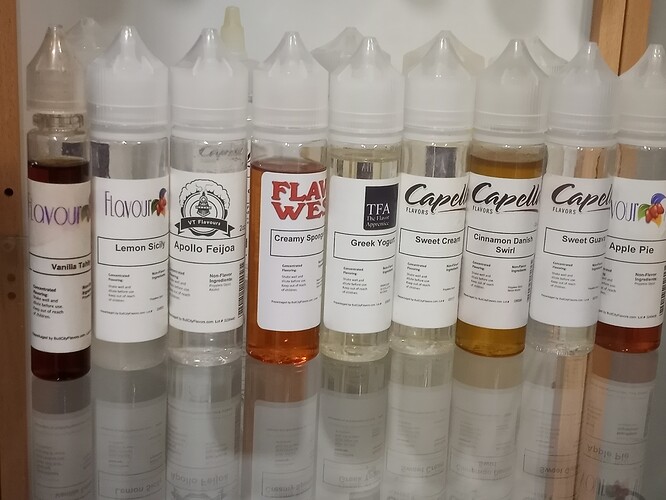 I have already rebottled alot and still need to do more. Im not sure about a few tho…but mabye if the sun got to them that may have caused them to go dark? Idk I don’t know much about the stuff like the Loranns bubble gum its brown but smells ok I know any gum I have seen aren’t brown.

(people change when they get married)

I have noticed that. I have never been married for that very reason (mostly).

The thing to keep an eye out for is bottles with residuals that have separated from solution floating around inside. I had a bottle from Flavor West that had that. Don’t recall the name but someone said “just give it a good shake”. So I’m like, nah fuck that. I tossed it.

I have noticed that. I have never been married for that very reason (mostly).