You don’t have inw biscuit in there? I got some and although I haven’t tested it there is a big difference in colour and smell. (less butter, same spices but weaker on the nose) 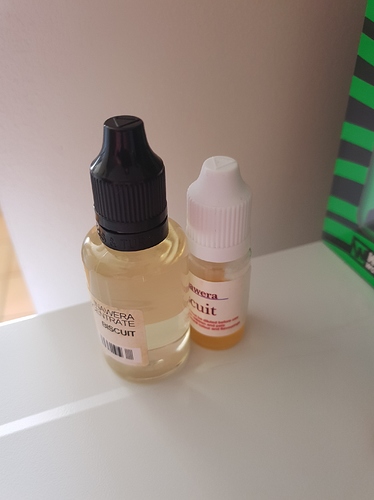 I have some, yours does look light in color… looks like they casturated the biscuit, I love that biscuit with some Sugar Cookie

Me too, might need to add some extra butter to the mix, that’s what it would appear different at this stage. I have fa butter which I haven’t tried yet, might need to pull it out.

I’m in that group not much of a fb poster though more a reader.

inw biscuit in there, I got some and although I haven’t tested it there is a big difference in colour and smell

I hope this is a fluke instance.
If Ina changes biscuit or any others any further without a heads up to the public, I’m going to be a very unhappy camper.

Please do get back with an update once you’ve actually mixed with it!

Incidentally, I’m also curious about the possibility of there being any differences because of the age (of your older bottle)… I know that I’ve seen a couple go darker, or have a perceived sense of being stronger (in one or two instances) because I think the alcohol was slowly evaporating (one of the few that didn’t go into glass upon arrival). Though a couple others just went “nasty” (because of chemical decomposition).

Still on a learning curve about long term effects of aging on flavors though (before being mixed).

I was the op on the FB group here is a new bottle of each (had to zoom on an old pic to capture my old inw biscuit). Once I clear my tonsillitis I will mix an SBS SF I still have some of the older bottle to check.

Older bottle (but new at the time of pic)

New Bottle (it is from the same supplier as @marsh8 - I have also reordered from another supplier to check.) 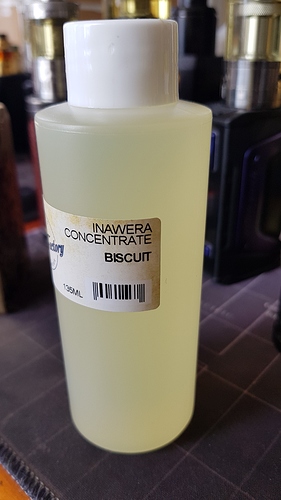 at the 33min 20second mark start and about 33min 30 sec you will hear it. I contacted Fresh and he couldn’t shed any more light on it, I also contacted INW who ignored my email.

Even with a blocked nose, I can smell the difference - not as strong and less buttery. I have spoken to a few people who agree that it is less buttery and drier as a vape.

I also split this off to its own topic

Thanks for the split as well as the additional input! (Definitely worthy of its own thread!)

I will keep you informed I’m very curious myself, my nose is leading the way at this stage.

(hope I haven’t jumped the gun)

Started getting ready to test it yesterday and in my typical fashion it was not a test it ended up with 9 flavours.

I might actually do a SFT test, still haven’t ventured down that path.

They have a bit of a strange description their website, pear taste? Category fruit flavours?
I don’t think I’ve ever seen that before.
That’s on inawera.com 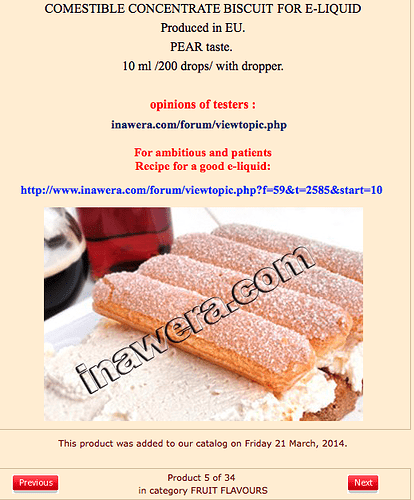 On inawerawinkel.com they say this

Seems they can’t make up their minds and they’re producing it.

I read somewhere recently that they reformulated a lot of their flavors. Almost one third of the lineup. Trying to find where I read it

that was a fair time back this is a seperate one

Ya it sucks tipping it but it is not at all pleasant in anyway. They have left all the shisha alone except the bilberry (as far as I am aware). The full list is in the other thread but here it is anyhow ANYZ (Anise) APPLE - CHERRY APPLE - LIME APPLE - PINEAPPLE ARBUZ KONCENTRAT (Watermelon) BLACK TEA BANAN KONCENTRAT (Banana) BIALY GRAPEFRUIT (White Grapefruit) BILLBERRY (SHISHA) BLACKBERRY - RASPBERRY CACTUS - LIME CHERRY - COLA CHOCOLATE MINT COLA COLA - MINT CONCENTRATE DRY C…

Just saw this over @ r/ DIY_eJuice. Thanks to u/ID10-T & u/Apexified. I hate this kinda news. So /u/ID10-T was kind enough to share some doom & gloom with me earlier. It seems Inawera is being forced to reformulate due to some supply chain issue laid out here Due to the entrance into force the tobacco directive we were made to contact our suppliers regarding the receipts of the flavours, otherwise we could not sell our products. Most of our suppliers did not make an issue of it, but there …

Biscuit isn’t on the list so if they did something to it, it was at a later date or they didn’t do anything to it and the resellers are effing about with it.

Well I have no official insight. But I do know a friend just recently got a bottle, around two weeks ago, and since I was curious I tried it. (I have a old bottle)

Keep in mind I hate and I mean absolutely hate that flavor, no matter if it’s in low or higher percentage, I’ll visit the bathroom for the next hour.

Let me tell you, unless they reformulated it a week ago, it still tastes as horrible as my old bottle too me. No difference.

So who knows, probably have to wait and see. I better go stock up on JF, before it’s sold out lol 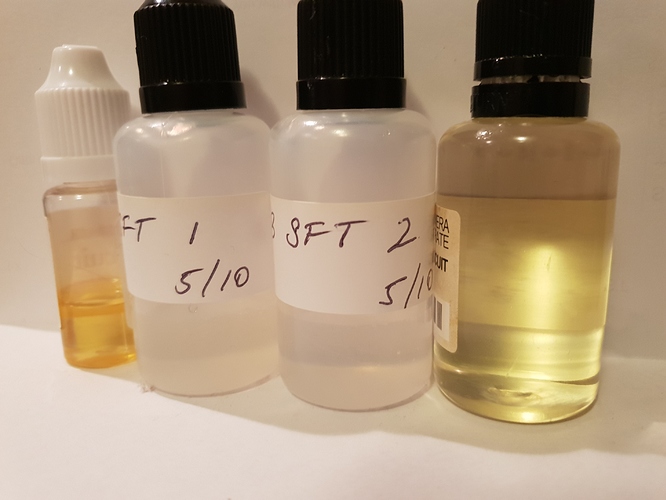 Now just to figure out what to test it on.

I’ve tested them and the main difference I noticed was the older one was harsher, not sure how relevant that is. There was none to very little difference in flavour. All I’m getting is a slight buttery icing sugar, will leave them settle and come back in a week.