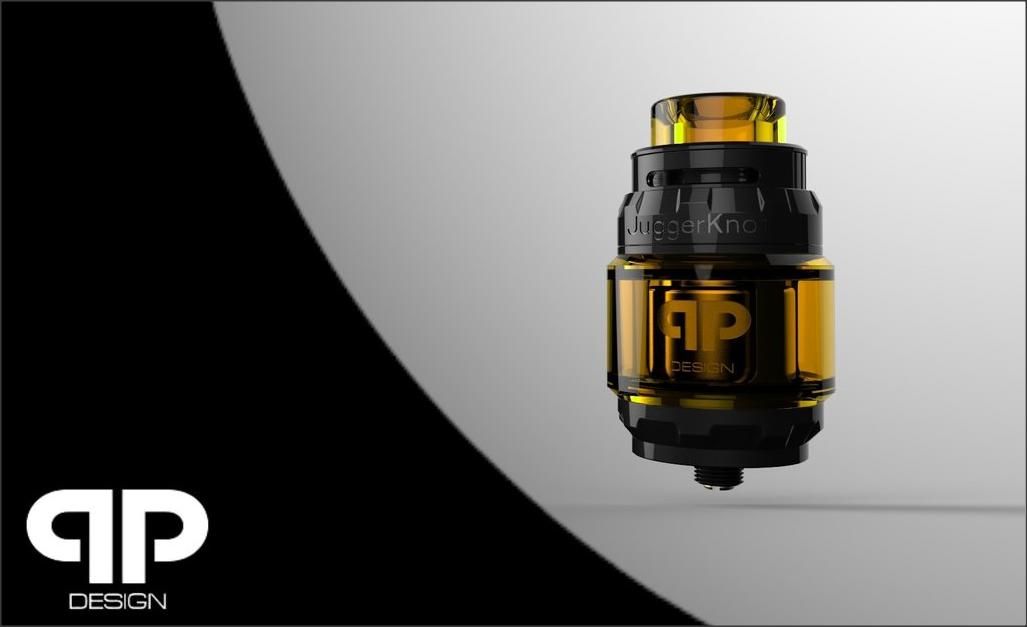 Happy Thanksgiving and review reading out to everyone !!! After having tested and fallen in love with the QP Design Fatality RTA wanted to see if that was a fluke, or if they really knew what they were doing, in testing this, my second QPDesign tank. No free samples given (again) so #IPaidForItMyself.

Although it didn’t have the over the top packaging of the Limited Edition Fatality, it came safe and securely packaged. 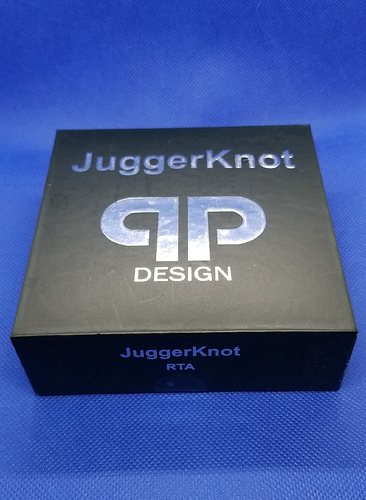 No information card, but as standard fare for QPD, they included all the stuff you needed. 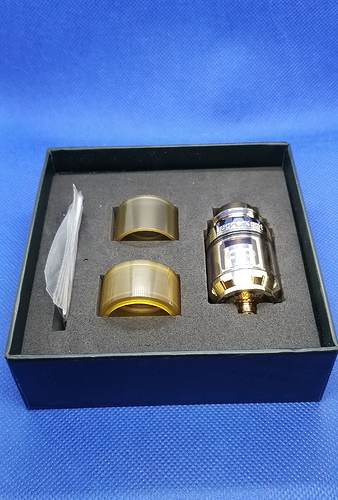 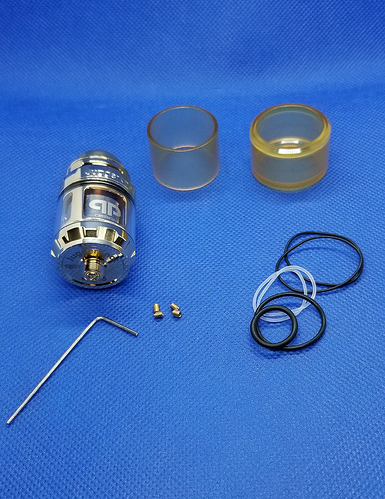 Just like the Fatality, this one is also a show stopper, and pictures rarely do it justice. 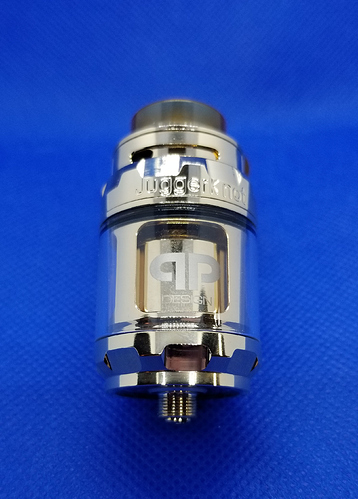 For all of my testing I used the 4ml glass tank. The gold color is stunning, and all of the finishing, threads, and machining were top notch. 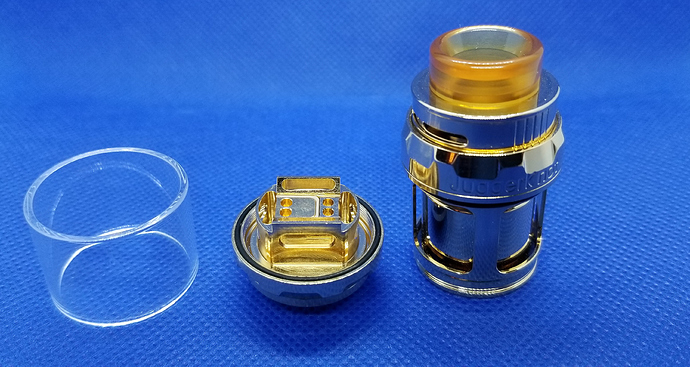 Attention to detail extended throughout the entire tank down to the adjustable screw, and knurling on the bottom. 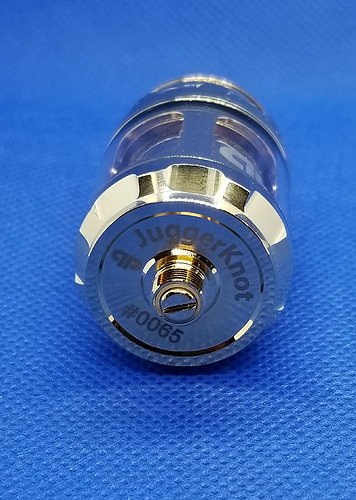 The included 810 drip tip fit securely, and looked great. The dual airflow slots (opposing sides) worked great, despite having some resistive drag even when wide open. Adjustments were easy to make, and I preferred the wide open setting. 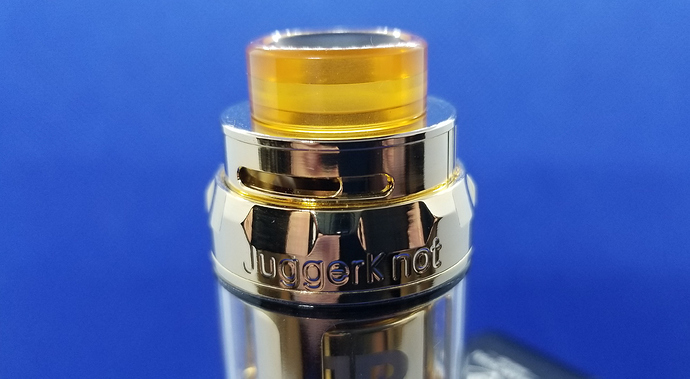 The juiceflow slot may cause issues if you are using fatter tipped bottles such as cosmos with twist tops. I was able to fill with them, but it was less than fun. All other smaller tipped bottles proved to be a non issue. The o-rings sealed nicely with zero leaks, or accidental openings. 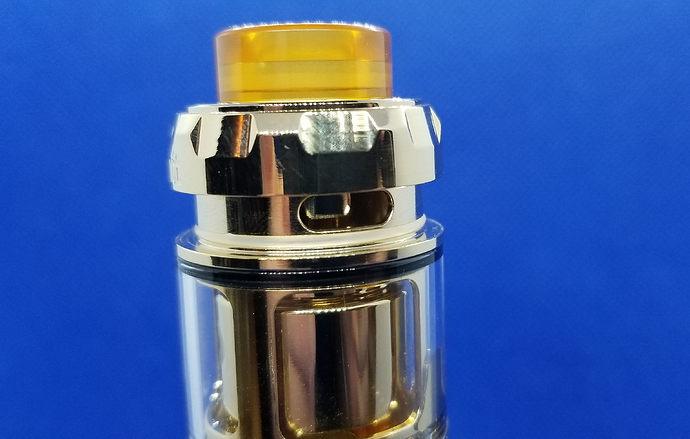 Because of the air channeling the entire top section does not come apart, but I had no issues cleaning the tank, and the superb flavor made it worth it. 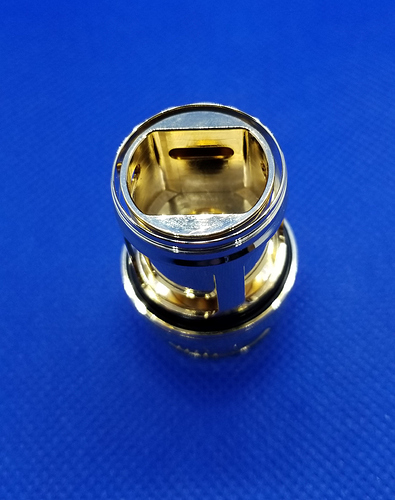 With a 24mm footprint (flares to 28mm with glass tank, and 31mm with bubble tank) the deck proved to be spacious enough to build on with no issues. The juice wells did require some thinning, and trimming of the tails so as to not overpack when using cotton on 3mm ID coils. The top airflow is VERY smartly directed down through channels which perfectly comes up under, and beside the coils for great flavor. 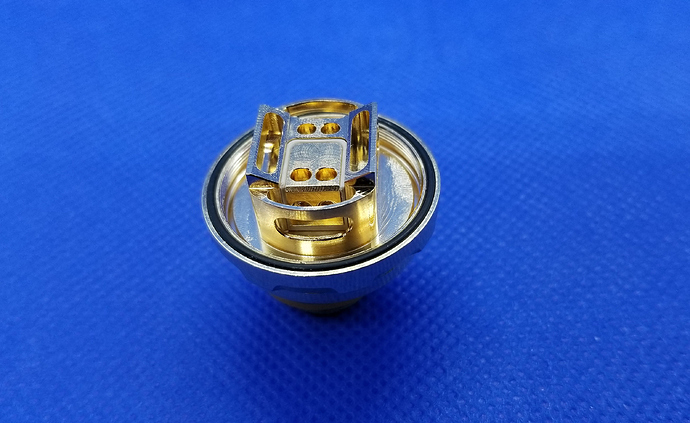 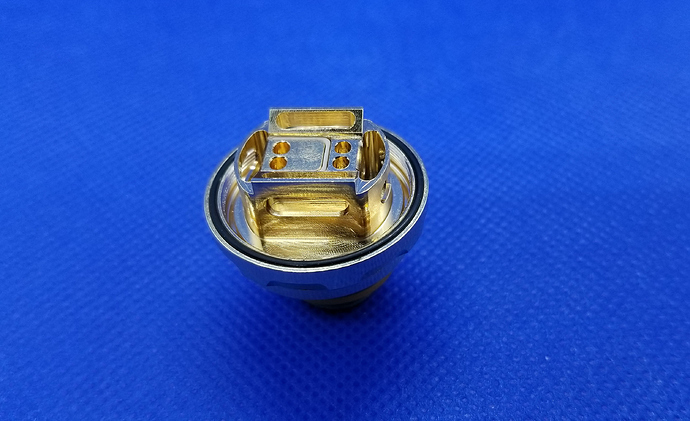 My first build was with some tiger coils 3mm ID coming in at .49 ohms. I chose to use my precision Wiha driver, as opposed to the included allen wrench. 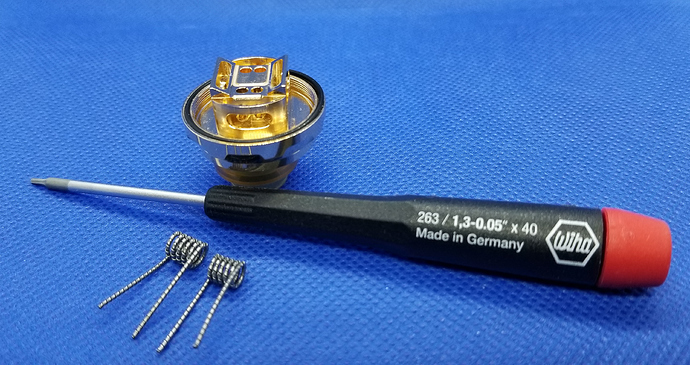 As typical with postless decks, you must trim your leads before tightening, and got mine right after the second try. Clearly bigger coils can be run in this with no issues. 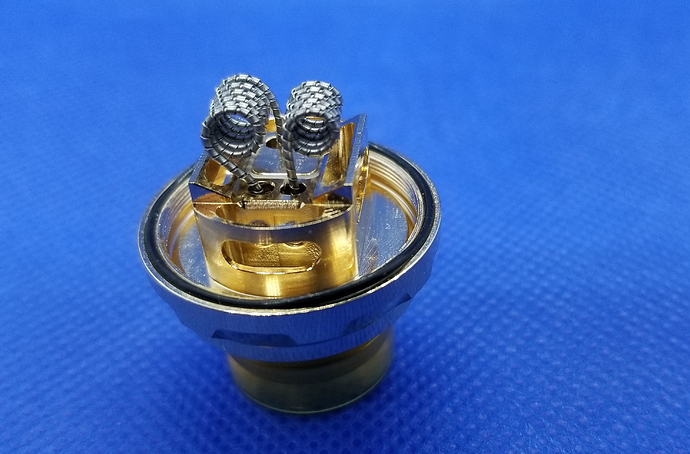 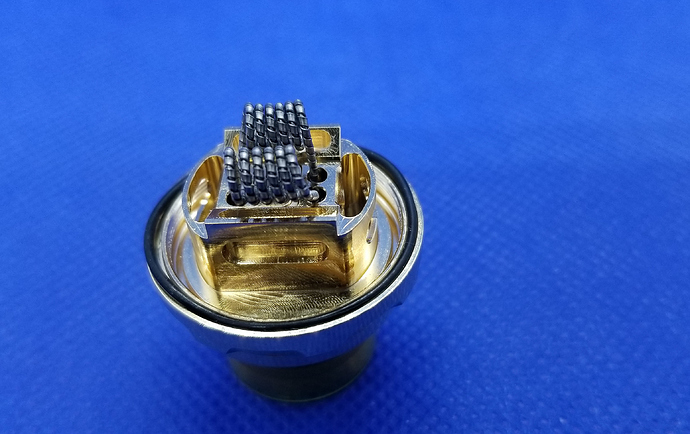 I did have to trim, angle, and thin the tails more than expected to get some breathing room in the wick wells. 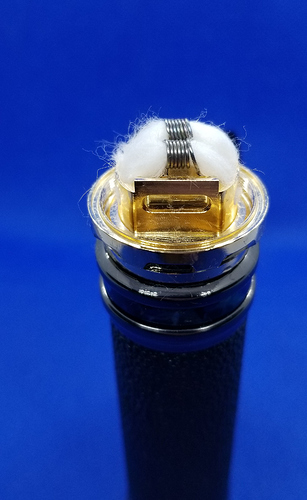 Gassing up the ride …

As mentioned, my beloved Cosmo twist tops were too big to cleanly fill, but most other bottles were not an issue at all.

Having owned and used the original OBS Engine, the similarities are glaring, BUT, the flavor produced by the JuggerKnot is worlds above what the engine could muster. Be advised, everyone’s tastes are different, but when comparing this to my go to Steam Craves for flavor accuracy and production, there was only a SLIGHT difference in flavor, with the Steam Crave(s) taking it by a hair. Surely the reason for the better flavor was the JuggerKnot’s air channeling FROM the top down to BELOW the coils, which the Engine did not. To me, this seemed like a newer/better/improved OBS Engine design. The flavor and vapor production were off the charts, had NO leaks, even when laying it filled on it’s side for 15 minutes. When comparing the vape between the tiger coils, and my simple single wire Kanthal wrap, I actually had better flavor, with the single wire coils. The tigers seemed to spit and fit a bit more. The o-rings were just compliant enough to keep everything where it needed to be, with no issues after multiple builds. The tank is very solidly built, and looks great on almost anything it rides on. With the smaller 24mm footprint looked great on my Para’s with no overhang.

Now with all the gushing love fest out of the way, a few negatives that I picked up on. I may have over-tightened it on the first go, and when trying to tear it down, the knurling on the bottom proved to be almost NOT enough to get it back apart. Could have been user error, as I did not lube any of the o-rings, but be aware. I also had to do more work on the tails than I was used to including thinning, angle cutting, and dredging as to NOT overpack the juice wells. I had 3mm ID coils with tight cotton, so nothing out of the ordinary, but be advised to not overpack, which will require a little leg work, but not the end of the world. The third and final issue was the beloved juice fill port. I have tons of Cosmo 120ml bottles with twist tops scattered around, and I was actually able to fill it ONCE with them, but ONLY once. All other attempts ended poorly, but switching to almost any other tipped bottle, was a non issue. For that issue, it seems OBS might have done a better job. 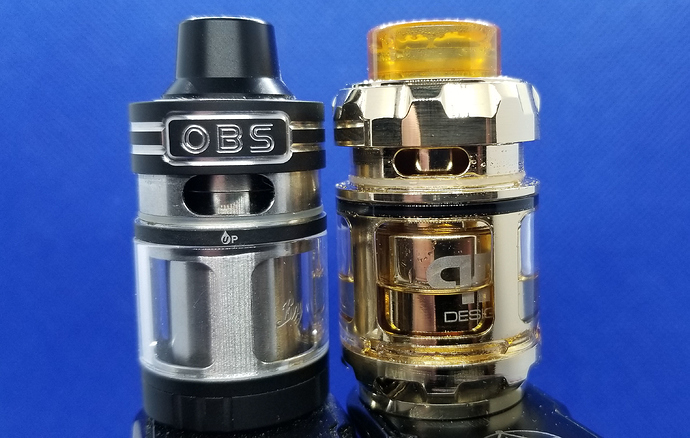 All in all, this is a GREAT, smaller footprint RTA, with outstanding flavor production, no leaking, and looks great doing it. It did not seem to be overly picky about coil size or type, and produced evenly across different coils. With no juice flow, how you wick and load the tails will make a difference. If you’re looking for a great looking, leak free RTA, but don’t want the additional size of the QPD Fatality RTA, and/or you loved the original OBS Engine but wanted more, and accurate flavor, this one will do it for you. 8.0/10.

Gas City Vapes still has them in stock:

Thanks for the review

You’re welcome, and I’m anxious to hear about your tests on the clones.

You’re welcome, and I’m anxious to hear about your tests on the clones.

I won’t do a proper review since they are clones, and as mentioned, only reason I got clones instead of the real deal is insane local prices and insane shipping from US/Canada

Great review, nice pics, on an expensive RTA. Someday I hope to get outta debt or win the lottery then for sure i’m in.

Thanks @CosmicTruth. If I get a winning ticket, I’ll cut you in brother.

The hobby of coiling, RDAs, RTAs, DIY Juicing, the rabbit hole keeps getting deeper and deeper. take a look at this SS316L Vertebraid I homemade. I’m bound to land on the bottom someday. 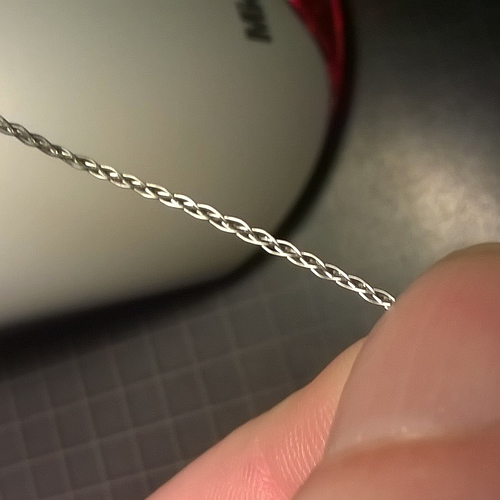 Very nice @CosmicTruth. I seem to NOT have as much patience as I probably should with coil making. Don’t worry though, it may take a while, but I’ll meet you on the bottom …

That glass is for the juggerknot mini though, which is a single coil rta 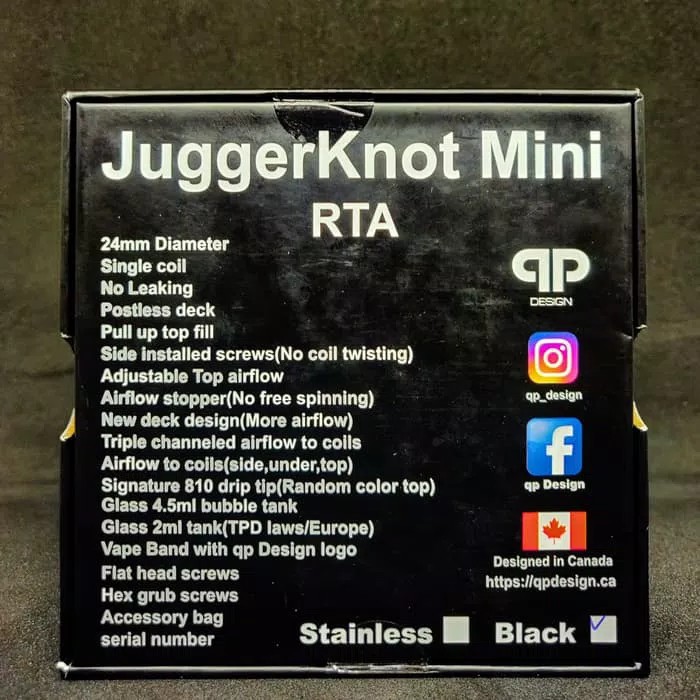 Loving the mini. You should pick it up to complete the set.
Great read, thanks.

Very nice, I like your reviews, well written and informative.

Nicely done sir. That Juggerknot is sharp looking that’s for sure.

Thanks very much @letitia and @cutlass92.

Thanks as well @dan_the_man, sharp looking is right !!

Thank you for the great review, have been looking at this RTA before but I don’t have any vaping budget right now (besides base & flavors) so I will have to wait and enjoy reviews so far.

Thanks very much for the feedback @liquidsummers.

Great review bro, I just bought a dog so my budget is being eaten at an astonishing rate

Great review bro, I just bought a dog so my budget is being eaten at an astonishing rate

Hehe, NICE @Josephine_van_Rijn because I am ALL ABOUT the animals. I actually HAD some reservations in buying both the Fatality and JuggerKnot as it DID wreck my budget. Thought about just getting clones of both, because why not, right ?? After doing more research, and watching some reviewers (very few) that I actually respected, it seemed worthy enough to get the original versions, if not to only pay it forward to the creators. Are either WORTH the price tag ?? Maybe … Now that I’ve got two QPDesign units under my belt, it’s CLEAR that they KNOW what they’re doing. Is the Jugger a ripoff or re-design of the OBS Engine ?? Perhaps, but if it is, it’s a MUCH better version.

Chasing the flavor is about 95% of vaping for me (with a little NIC addiction thrown in for good measure I’m sure), and whenever I test something new, I compare it to my ADV flavor control tanks for comparison, as I know exactly how they are supposed to taste. If the taste is off more than a bit, on the shelf it goes. I was actually surprised at how much better the flavor was in the Jugger vs. the OBS Engine, but after closer inspection, it’s all about the airflow vs. the coils IMO.

If your budget is blown like mine is, @adary has been doing some clone testing, and he and @woftam said they’re pretty damned good, so no harm or foul in picking one up. Thanks for taking the time to read my broken, stream of consciousness review.

take a look at this SS316L Vertebraid I homemade.

@CosmicTruth How did you weave that ?