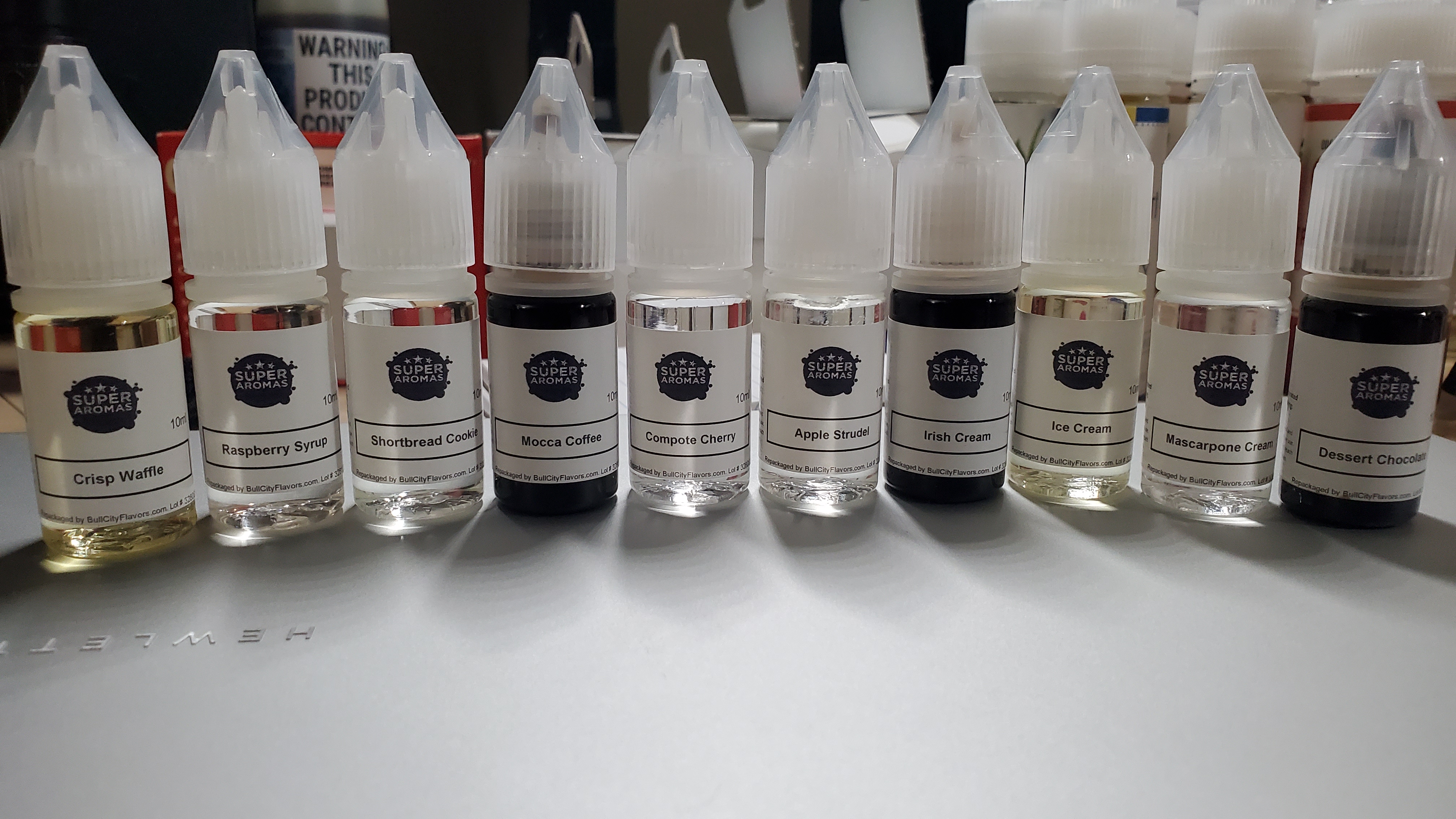 Thanks out to @Wllmc from @BullCityFlavors for sending these out for testing. Not a lot of information out there on these, so decided to start LOW with these.

All mixed at the percentages listed, @ 3mg, 70v/30p, tested on a SteamCrave RDTA v.1, with dual vertical, 7 wrap, 24ga. Kanthal coils, with fresh cotton and dry burned coils in between tests. Steeped for 1+ week.

Apple Strudel (SSA) 1.5% (9-18-20) – Sugar, and Spice, and everything Nice is what this one had. As far as the strudel portion, your take on a strudel will dictate what you think about it’s inclusion here. I got a solid bakery from this one, that paired perfectly with the sweet and full, slightly spiced apple. The apple(s) were of the “filing” type, and similar to FLV’s Apple Filling, but with less spice. There were some spice notes, but very low in the mix, and in no way obtrusive. At 1.5% it was very even, full, and satisfying with little to no concern of over or under flavoring. The bakery element did waver to and from a strudel-ish note, but was so evenly paired with the apple it was hard to nit pick it.
Sweetness was right about mid level, and expected in a desert type flavor. Pretty good one here, with not much to take off for. If anything might need to be boosted, it might be the strudel, but that would be a toss up. For a very natural tasting (not artificial) Apple Strudel that is mid sweet, and quite full at lower percentages, this one can get it done for you. Far better than most of the “Apple Pies” out there.
9.2/10.

Dessert Chocolate (SSA) 0.85% (9-16-20) – FIRST ONE on deck, and I chose a DARK ONE at that. Don’t be AFRAID, just because something’s dark, hehe, but you might change your cotton more often, depending on the flavor. Upon FIRST vape, I KNEW this was a KNOCK OUT flavor. Chocolates are hard to get right, whether it’s Band Aids in Milk Chocolates, or Dark and Bitter/Dry in Dark Chocolates. This one had NO off-putting notes whatsoever. I can’t think of a direct comparison, but at first FLV’s Red Velvet came to mind, as it had some very good almost cake elements to it. No Band Aid, no dryness, no bitterness. At this testing weight, it was very nice, rich, and full. It could even be used lower if needed, so we are talking Ultra concentrates at this level and lower. Tested this at 65 watts, with no scorching or burning that I could detect, which was another plus. The chocolate leaned darker, but wasn’t a full “Dark” chocolate, and the cakey-ness could not be denied, and it really pulled it into a desert type flavor. You could almost solo vape this IMO, because of the great pairing of the choco and cake. The cake notes (or whatever you deem them to be) really pulled this into a unique category all it’s own, much like Wonder Flavor’s Smores Cupcake did. All in, this first one, was far better than I expected, AND, at a very low mixing rate. Because of the added richness (cakey-ness) I could DEF. see this in quite a few desert, smores, etc. recipes. While not a “pure” chocolate per se, it’s damned good, and should be on your “must try” list, if you are new to SSA flavors. 9.9/10.

Raspberry Syrup (SSA) 1.0% (9-17-20) – As sometimes happens, the moment you start a new flavor, you get an impression, that you can’t shake throughout the entire test, and it happened again. First thoughts were INW Raspberry Malina meets MF Wild Raspberry. Let’s start out with what this one wasn’t. I didn’t get a huge “syrup”-ness from this one, BUT, that’s about the ONLY bad thing I COULD find with it. At 1% it was nice and full, and probably COULD be run lower, but in no way was it hitting the ceiling @ 1%. Super damned delicious, with about ZERO of the issues that I’ve had with most other RB’s. It centered around a mid and somewhat dark raspberry, with surprisingly low sweetness (hence the “where’s the syrup”). It had a really nice tart-ish finish that really drove an already GREAT raspberry flavor, all the way home. Tasted very natural with zero off-putting notes or characteristics, and almost seemed to have a smidge of seeds in there. Currently (but not with MF’s Wild Rasp) I have to combine multiple players to get a great RB, but this one, can really hold it’s own, and leave you wanting more. Second one from SSA that I’ve tested, and thus far, VERY impressive. If you have tried MF Wild Rasp, and INW Malina, then invision the two of them combined, and that will get you very in the ballpark of this one. Despite being named a “syrup”, the lower than expected sweetness would allow far greater uses of this one, and you could spike the sweet up if needed. I hate to say it so early in the testing here, but this one also, could/should be on your must try list from SSA. Very clean, accurate, and natural tasting Raspberry, that encompassed almost everything you’d want FROM a Raspberry. 10/10.

Shortbread Cookie (SSA) 2% (9-18-20) – Oh Nooo, another cookie ?? Think again. That’s what I thought going into this one, “Do we need another cookie” ?? Well, after trying this one, I think we DO. This review directly followed my review of SSA’s Raspberry Syrup, and I immediately wanted to mix the two of these. At 2%, this one was right on track, rich, full, buttery, and somehow, really captured the Shortbread aspect(s). Not sure how they did it, but it is clearly NOT a cookie, or biscuit, but lands smack, dab, in the middle of Shortbread city. One could say it is “similar” to Jungle Flavor’s biscuit, which presented almost as a pairing of INW Bicuit, and FA’s Cookie, but this one is much more than that. SSA apparently spent some time really nailing the shortbread aspect of this, and it shows. You almost get a grainy bakery in this one, coupled with some buttery goodness. Not topped out at 2%, and it felt great at this weight. Sweetness was almost mid level, with no real take-offs. Surely it could be push/pulled if needed, depending on your American vs. European bakery needs, but you might just find after testing it, that you wont. All in, this is an outstanding, and perhaps the best shortbread cookie (type) that I have tested. Didn’t really pick up any vanilla per se, and not 100% sure if I’m getting a smidge of almond or not, but possibly so. If you’re in the market for a great shortbread cookie, and/or love your bakeries, you’ll have to add this one to your list as well. Sorry guys, I’m trying to go critical on these flavors, but after 3 in, I’m having a hard time finding any faults thus far. I kept teetering on a rating, because you just can’t rate everything at the top, but I emptied an entire tester tank on this one as well, and was left with no negatives. A great bakery shortbread cookie here, with butter elements that just can’t be denied. 10/10. 0.01% 100% pg * 0.75% Compote Cherry (SSA) * Thanks out to @Wllmc from @BullCityFlavors for sending these out for testing. Not a lot of information out there on these, so decided to start LOW with these. All mixed at the percentages listed, @ 3mg,...

The recipe currently looks like it’s marked private so can’t see anything through that last link.

REALLY interested in seeing your thoughts on these…just ordered 10 SSA flavors late last night from BCF! Looks like they’re at least pretty potent and I’ve had really good experiences with the quality of Polish made flavors in the past.

Some of them seem very strong, others not so much, so the testing percentages will be tricky at first @ZenZephyr. Link fixed…

Cool I’ll check it out!

I love trying out new flavors from new companies…personally have around 3k+ flavors from flavoring companies all over the world. However I saw on a couple of other threads that these are from the company that manufactures for MB which is great as MB flavors has some gems. Curious to see what these are like.

really curious about the raspberry syrup

We could get his thoughts much sooner if he ever decides to use a Game Changer. Until then, the suspense builds…

I hope you know what your doing. I would put an appropriately funny emoji there but I can’t. Anywho, if that Mascarpone Cream comes out good then Tiramisu recipes are gonna get a jolt of reality. Looking forward to hearing (reading) your thought on this one.

I hope you know what your doing.

Out of the bottle and mixing it seemed very close to INW Malina @Fishaddict420. Hopefully 1.0% wasn’t too high.

@Brotherbob, info is very hard to come by, even on their B2B site. I’ll keep looking …

LOL. I was thinking I hope you know what Marscapone tastes like. HEHEHAHAHOHO

Hehe, fair enough @Dan_the_Man. I just talked to @wllmc and I think he was starting tests around 2.0% so mine may be a little low. BUT, as they say, you can always ADD more, but you can’t TAKE it back out.

@Brotherbob Will said they are actively working on the MSDS/SDS now.

Who knew drummers had such good timing?? I was just finishing up an order at Bull City, when I noticed Sobucky’s bargain-basement prices. I looked pretty hard, but couldn’t find ONE single review about Sobucky flavors ANYwhere!

My guess is that they are Druids… or perhaps Dwarves working in an underground bunker. In any case they are certainly Invisible, and their ears have definitely evolved into Flavor Nodes.

My guess is that they are Druids… or perhaps Dwarves working in an underground bunker.

ROAR @SmokeEatsMan, you MIGHT just be right. Trying to find information on them, has proven difficult, BUT, Single Flavor Tests FOR the win. @wllmc (The Pro) said he was mixing them centered around a 2.0% point, so I’m curious to see how mine fare, with some low test points.

Who knew drummers had such good timing??

Any idea when the Sobucky Tests might go online? My Flavor Nodes are restless. No rush, I’m just wondering if I should hold off on my Bull City order.

Any idea when the Sobucky Tests might go online? My Flavor Nodes are restless.

Hehe @SmokeEatsMan, funny you should mention that as I was growing tired of waiting, and chose one of the DARKEST ONES to start. Have the Desert Chocolate in the tank now, and it is VERY GOOD. Going to be posting up soon…

Wow, another test? I love how you just don’t stop. You certainly keep the money flowing out of my pockets! Thx for another one, SD.

We could get his thoughts much sooner if he ever decides to use a Game Changer. Until then, the suspense builds…

Buy me one and I’ll test for ya’