Guys, really hoping someone out there has seen both of these in person, or has a solid suggestion toward one or the other.

I’d be using whichever one I choose with Profile RDA (mesh) and Gear RTA. I vape in wattage mode typically really lowish wattage, 20-60 depending on build, but I’ll definitely use the memory settings and the curves, which are an option in both mod. I’m also still developing my setup, and starting to build so possible my wattage will go up… however either of these are way more than high enough for me.

VooPoo X-217, Prefer the look of this one over the Smoant, I vape in wattage mode so the irregularities in TC aren’t an issue. Seems like a high quality mod, and I love the Gene chipset. I’d love to know if i can upload custom wallpapers on this one. I know its a silly concern, but I play with graphics, so being able to personalize… huge. I dig the clock that displays when it times out, though. I do like the swirling lights around the mod, and likely to utilize them pretty frequently. This is just the mod, standalone. 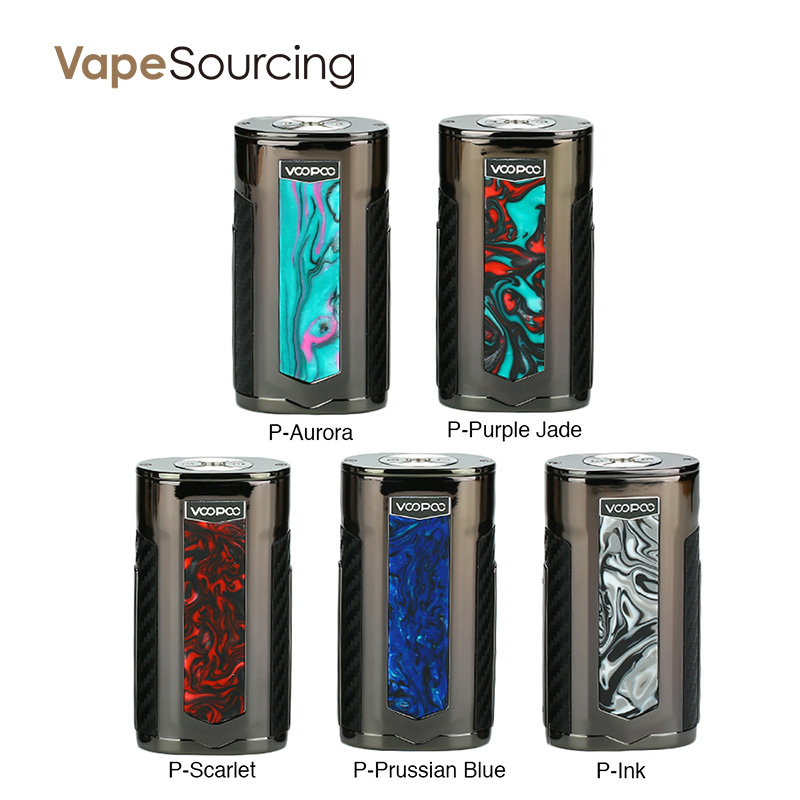 Smoant NaBoo, I know I can swap out personal wallpapers on this one. Don’t like the looks of this mod as much as the VooPoo, and I know next to nothing about the Smoant chipset. I think the ‘dance mode’ with crazy light show is cute, but probably not something I’ll use much. This is a kit, and the tank is actually pretty dang solid sub-ohm tank. I likely won’t use it much, but will be a solid backup.

They’re both reviewed really highly, by reviewers I’ve come to trust, I’ve been waffling back and forth for days. Does anyone have any thoughts as to which way to go? I’m a budget vaper, don’t buy mods often, so stuck with this and my lil squonker Eleaf for the next year, I’d say. This decision has taken on epic proportions in my brain, and I’m hoping for some wisdom from ya’ll to help me decide.

Oh, and there happens to be a review with Wendy_Vapes (who I just adore) vaping these guys side by side to test Gear RTA, if anyone is curious to see them side/side. You can see em both at min 13.45. https://www.youtube.com/watch?v=U2f4NQkBQ3U

Thank you guys! So appreciate any input.

Personally I would never own anything voopoo makes. Horrible customer service, they actually got removed from this forum. I won’t go into detail but it had to do with advertising to underage persons.
As far as smoant goes they make SOLID mods. So if I where to pick between the two I’d go smoant hands down.

I think most here will agree w/u. I wouldnt feel bad buying old stock of products from us vendors since they are screwed by having stocked them before this shit happened but not any new products like that one.

I’m new here, and haven’t been spending much time in the vape-verse over the last 5years or so… clearly i’ve missed all the poo about 'POO. I’ll definitely check into all warranty type situations, maybe buy a squaretrade warranty or something, if I end up doing the 'Poo. Absolutely can’t be left holding the bag with a dead mod. So appreciate ya’ll bringing the bad service issue to my attention.

Oh wait a sec, underage advertising? Lawd, that is the last thing vapeworld needs. I’ll do some hunting on bing to get scoop.

Forum members here that own smoant are very happy. I am not sure of that particular one tho @Sprkslfly and @fidalgo_vapes could help ya find a model to suit ya am sure. Gl to u!

I’m new here, and … clearly i’ve missed all the poo about 'POO

The Smoant Cylon is the best of the bunch , but for a daily workhorse the battlestar has treated me well and is very nice in the hand , i also like the Charon 218 TC … I have not tried the Naboo yet

While Smoant isn’t as great as they were before the dev team split… They are still a good unit for the money (since you don’t use TC. If it might be a future consideration, I’d recommend something other than the Naboo, as I’m unsure of the chip it uses).

TC is mediocre at best in the “Ant 225” chipped devices (as they changed chip manufacturers). But they still do “well enough” in power mode.

“CRAWLER10 for 10% off” should still hopefully work if you happen to be interested in the Cylon:

You never have to use TC mode of course, but it sure is nice to have one that works well with it should you decide to travel that path in the future!

I suggest you don’t buy from efun.top they have been mentioned more than once for being very shady here

In transit for 47 days so far, all emails to CS ignored, dispute with Paypal lodged and so far has been ignored (7 days). I trust that paypal will handle it appropriately. Do not shop with

you can use vape crawler to find sale deals and cross reference for the most trusted vendors.

Edit: I like to do CTRL + F and type a name to find it in the thread

Personally I would never own anything voopoo makes. Horrible customer service, they actually got removed from this forum.

In the same boat @Cutlass92.

NaBoo is being described by reviewers as next step past Charon. Some functions are upgraded a bit, and the buttons up down are touch screen (though not all menu functions are touch, which I like), but they’re very similar.

Ok, I’ve been hunting mods for 2 days, nonstop (this is not a normal thing for me, mind you. My main mod died, and I’ve got mad vaping on the brain, dying to get new mod because I’m on an elderly soooo sad aspire. lol So I’m fixated, which happened to coincide with my days off work. lol) and I’ve been hunting for things manually. I’m going to check out vape crawler right now!! Thank you! And crossing fingers re: efun,since I already have an order in with them last week.Still in transit, obviously, but it is tracking at least, which is good. I’ll check out the trusted vendors, for sure. thank you!!

That makes me another against the voopoo, although the drag was a good mod for most, their practice’s are a big turnoff, smoant on the other hand has a great rep, and isn’t that shabby for temperature if you ever decide to go there, I have a battle star, and it’s served me well and is built like a tank. I also think while ordering within the state’s is much better than waiting forever and hoping that you get what you ordered, I do order from the likes of Fasttech and 3f Vape for bits and pieces, but I feel much safer paying just a few more bucks and getting it from a trusted vendor here if possible, I have actually found better deals stateside on many things, especially if they have been realeased for a few months. And catch a holiday discount or a good sale, I can’t say I have ordered from efun personally but I don’t think they will be on the list of places to buy from either, too many negative comments and I question their site safety. Imo

The drags chip is supposed to be great , they are a bit shady though , the main reason I never bought one is bc I couldnt get over the back panel that has DRAG wrote for the world to see . I like minimal branding … Theae days you can pick them up for under 40usd. If you choose to go with voopoo that’s your personal decision and I don’t think anyone will judge you so decide for you dont base your choice bc a lot of people have chose to not use them …

Thanks, @fidalgo_vapes I totally appreciate that. I didn’t know anything about all the VooPoo drama, just that it was well reviewed and I really love the looks of it. Honestly,if I could verify that wallpapers were customizable it would be a no brainer for me.

I would take the whole voopoo bashing with a grain of salt
They are accused of sponsoring a video on youtube that has mostly underage viewers
i’ve looked into it quite a bit and there’s no proof that they sponsored.
a competitor could have easily staged this “sponsoring”
They were boycotted a long time ago for something else and it’s basically more of the same murky waters. But I don’t want to derail your thread

i’ve looked into it quite a bit and there’s no proof that they sponsored.

Actually the video has been removed, and I watched it. The host of the video said voopoo was the sponsor.

I reviewed Naboo back in the day and it’s not bad as long as you don’t want to go into TC. The screen lock is also a bit wacky. I would go with @Sprkslfly recommendation and look for a Charon or other Smoant stuff.

The YouTube video saying they were sponsored by a voopoo isn’t proof this could easily be be part of a staging I’m not saying voopoo didn’t sponsor but so far Ben Phillips has refused to comment and provide real proof and Tony b retracted false statements he made about voopoo. This is YouTube where people buy subscriptions etc so it wouldn’t be all that crazy