Although it’s widespread in Europe it’s just now finally taking off in the United States. I would like to see more Regulated Squonk Mod’s. The only way this will happen is if we all UNITE and contact the Manufactures by email and let them know what we want. Personally I would Love a DNA Wismec Reuleaux Squonk Mod. Two 18650 battery’s and at least a 10ml bottle. so I guess that would be a 133w which is plenty for Squonking. The Reuleaux is the perfect shape for doing a two battery Squonk Mod. Let me know what you think and contact the Manufactures. Thank’s

13 Likes
RDA's for testing new flavors and Tanks for every day use
How many coils for 26 AWG Stainless steel
New sqounk on the way
Beginner RDA
Testing new flavors starting small and bumping up questions
Favorite RBA/RDA/RTA?
Why do RDA's hate me?
Squonk mods
Vape Mail 2019
Be polite and introduce yourself! (2017)
Choosing Dual Coil Squonk RDA
sillyrabbit April 21, 2016, 7:13pm #2

I’ve never heard of this. And I’ve been vaping for a long long time. What is it ?

Squonkers have been around for many years. It’s a mod where you can install a bottle that is then connected to an RDA - You can then just squonk/squeeze/push the bottle to “drip” This reminded me that I have a Big Dripper V3
in a box somewhere. Forgot I bought it a while
back. Could never get it to work right with a
single coil. But it did sit nice on my nemesis in
18350 mode.

Now I see what you mean , I know what they are. But I don’t trust ejuice inside my mods. If that plastic bottle cracks or brakes , it will destroy a mod. But that’s just me But it would be convenient for sure.

I’m loving the green liquid in that mod. I do want to try a squonk but I’m also thinking for me there would be a learning curve.

Squonk boxes have been around awhile…I’ve built 5. And I use 3 of these everyday. These are all just DNA40 devices but the green was is TC with TI. Unfortunately, these enclosures are not available for purchase anymore. 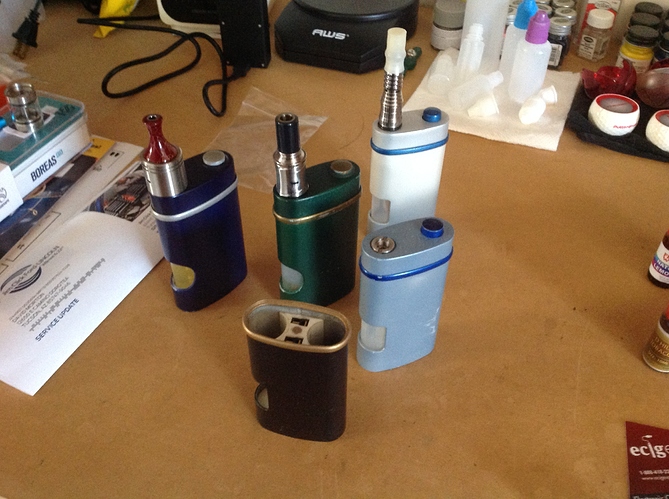 Kanger’s new Dripbox is a great budget introduction to squonking (and probably available even cheaper from other online retailers).

I wouldn’t be surprised if the (relatively cheap) screw-in replaceable pre-wicked decks make them attractive to vapers who’ve avoided RDAs in the past.

I hope this first version will be successful enough for Kanger to think about VV and TC versions of the mod section and maybe several different kinds of coils on their disposable (or rebuildable) screw-in decks.

A lot of people are buying that thing… I agree on everyone’s points.

In my perfect little world it would have a vv/tc mod that holds two batteries and a really solid rda with lots of room to build some heavy clapton coils on.

Again you folks are encouraging me to spend more money!

Kanger came out with the Dripbox to get more people into Squonking. I’m just to the point in vaping where I need more power for 316 SS fused Clapton coils in my RDA’s and longer battery life. The problem with Squonking is you have the real high end mod’s 400.00 and up or the low end. I would like to see more mid range one’s everyone could afford. Something with a good chip/board like a DNA or YiHi with two 18650’s

You were talking about a learning curve. You know they have those New notch coils that you can put in any RDA and it would probably work just fine for you ( just a suggestion )

A dual battery Realeaux squonker with a DNA200 chip would be awesome!!

Yes it would!!! Send Wismec a email the more people that ask the faster we all can get one