Hey all… thought it was long past due for a public, and “up to date” list of brands and abbreviations.

PLEASE NOTE:
This list is primarily to help DECODE the current state of things (not to reinforce the acronyms in current use)!!!

This is NOT just for flavor manufacturers (as much as I wish it was), but it includes those who relabel, rebrand, and resell (vendors) too.

It’s a lengthy list, and whlie some are obsolete, there still exists the need to retain them (either for posterity, or because folks might still have some that haven’t gone bad yet).

I’ve spoken to Daath (or at least left a PM) with a reminder for the need to consider/implement a “locking” feature for flavors that have been “retired” or even reformulated. But that of course is as he has time!

My hope is, that with enough input from both:

We’ll have a more thorough and complete picture of the state of things, which should help with the continued refining of the Naming Structure, and Layout (both now, and potentially for things to come; IE: “Database 2.0”)

Some of these overlap, and has led to understandable confusion amongst both newbies and veterans alike.

But if “we’re” (cumulatively speaking) not AWARE of the overlap, then we can’t fix, nor prevent it before it happens!!

Fortunately, it seems that the “trend” has been to spell out more and more, so that’s helping to keep things from going into “previously known” but what would otherwise be the incorrect abbreviation (iEG: if CV was previously alone, and was understood to be used for Chef’s Vapours -before the renaming of the company, and some other comes along and has a brand of Central Vapors. Then it’s understandable that a newbie might put his CV [from Central] into the CV [that used to be Chef’s]).

And the above leads nicely into the whole company rename due to legal or marketing reasons…
So now, take that, and get more “convoluted” entries, when Chef’s Vapours becomes Chef’s Flavours, and VOILA! You now have TWO categories for a single company. CF and CV.

(Sorry Chef’s -I’m really not trying to pick on you guys! But it was the first that came to mind, and serves as a great example!

I’m going to do this in alphabetical order (for simplicity at the moment)
But I hope to get a revised list(s) done at some point, to show which ones are actual manufacturers (OEM), which are re-branding, and which are resellers. (And whatever other combinations are out there, ie: companies that mix OEM flavors [not finished liquid] and market them under their own name. While they don’t actually manufacture anything, they still count as valid flavors obviously.)

DH - Drip Hacks = (previously understood to be FA rebranded. “HackShots” are currently reported as being FA though… June 11 2019)

RK - Reka (REK, Reca, Wreka, rk)
RV - Rainbow Vapes
SA - SolubArome (manufacturer, France)
SC - (used to be reserved for China alone, but this is changing due to other Chinese suppliers coming on board) Also, SEE DIYVS NOTE BELOW!!

NOTE: adding the following as a “tag” because I’m not yet sure about the abbreviations in use here:

28 Likes
New to diy, base flavors that are a must have?
One Stop Flavors
[REQ] Krsp strawberry
The Oxva Origin an 18650 Pod
The ELR Users Guide to Creating Your Flavor Stash
Chemnovatic Flavor Notes
Recipe help plz
What Ya Vaping/Mixing Today (Part III/IV) 2019/2020
What Ya Vaping/Mixing Today (Part III/IV) 2019/2020
Is MTS Vape Wizard the same as MTS Wizard
Blank canvas
My Recipe list
How do i enter The Flavor Apprentice in my Stash
One Stop Flavors
Updating flavor naming conventions (an update from Sprks)
White chocolate base vta/white chocolate vt the same?
Sprkslfly November 21, 2018, 6:40pm 2

Other sources of conflict: 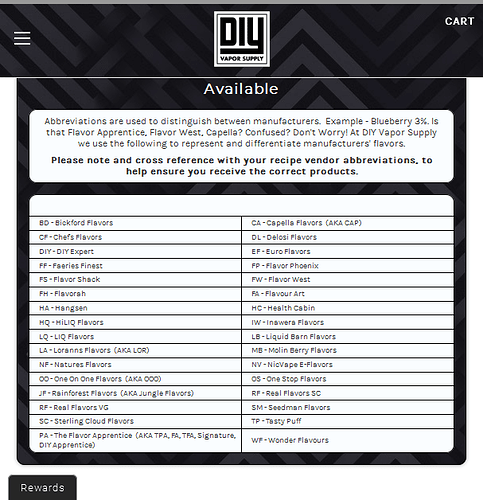 Taken from Iummy’s thread (linked above in blue)

Chefs have previously said that the Rebranded range are sourced from several different producers, some of which aren’t available as retail products.

Other important tidbits and asides:

Capella has come out with a RF version (not Real Flavors), but Reduced Flashpoint.

TFA has done similar, but uses the NF (understood to mean Non Flammable), but they actually describe them as “Less Flammable” (probably for legal reasons).

It DOES NOT mean that it’s a Natural Flavor. So please don’t enter Ginger Ale, Natural (TPA). As it doesn’t exist. Wonder Flavors has BOTH SC and REG strength flavors. I’m pretty sure I’ve seen some overlap…Be careful to check the manufacturer’s site before keying these in please!! (OR when suggesting dupes

I really like the 3 Initials max, and fully support the change from TPA to TFA.

I prefer INW for Inawera, not the current INA.

Maybe I missed FLV for Flavorah

INW for me too. If you put INW Flavours into google far more results show for Inawera than INA Inawera for instance

Maybe I missed FLV for Flavorah

Nope. But I did as I was copying things over. lol
Thanks for the heads up!

Great job, nice to see it is really moving forward.

Personally i dont think it is important if things will end up as being INA or INW and so forth, as long as there will be a proper standard, then we just have to get through the transition towards changes.

Anyway, it is a capital i and not lowercase L (iummy)

This is a very common issue with my nick, too many think it is a L.
I dont point it out hoping you will edit it, your time is better used elsewhere, just pointed it out.

Such as Lummy’s (and others) excellent post(s) here:

Taken from Lummy’s thread (linked above in blue)

Sorry about that! But appreciate the clarification!

edit: I had to add NR, ECX, and PUR anyways since I forgot more obvious ones. chuckles
So, while I was there… lol

Waawahwahwow! Thanks for the hard works!

Great work, man! …you got sump’n against Nature’s Flavors (NF)?

You also have a couple others I’ve forgotten just in the A’s lol.

It also seems that “Area 51” isn’t the only one using the Alien Flavors tag. I know I’ve run across it before in another brand (as a line). But I’ll be damned if I can remember who it was offhand. (Another reason for creating this list, and requesting public help. There’s just TOO MUCH for any one person to try and remember every time)

Yes from what I’ve gathered.

Thks again for this and the work cleaning/attempting the DB. It has always been a thought of mine that if decent list existed, few would make mistakes.

Christ,… now I have to update the italian version of the list on our forum….

@woftam already mentioned Jungle Flavors and Juice Factory but the above are also causing confusion.